D1 versus D2 dissection in stomach carcinoma: evaluation of postoperative mortality and complications

In this study, we aimed to evaluate the factors affecting morbidity and mortality in patients undergoing D1 and D2 lymph node dissection for gastric cancer by surgeons with low case volume in a general surgery unit that is not specialized in gastric surgery, and to review the literature.

Only patients who were operated with curative intent were included in the study. Their data regarding age, gender, co-morbidities, smoking, alcohol use, ASA score, albumin level, hemoglobin level, type of surgery and preoperative findings, additional procedures, postoperative early complications and mortality were evaluated.

Patients were classified according to age, as below or above 65 years. Co-morbid diseases such as diabetes, hypertension, chronic obstructive pulmonary disease and chronic liver disease were taken into account. Anesthesiologists determined the ASA score of our patients prior to operation. For comparative reasons patients with ASA score equal to or less than III were assessed in one group and those with ASA score of IV were accepted as another group.

The surgical intervention was recorded as two separate procedures, either total or subtotal gastrectomy, and the perioperative findings like tumor location, palpable lymph nodes and splenectomy were recorded in detail.
D1 and D2 dissection was performed systematically as determined by the JRSSG (Japanese Research Society for the Study of Gastric Cancer) group (1). The perigastric lymph node stations that were located along the lesser curvature (1, 3, and 5th stations) and the greater curvature (2, 4 and 6th stations) were referred to as N1 group. The lymph nodes along the left gastric artery (no. 7), hepatic (no. 8), celiac (no. 9), and splenic arteries (no. 10, 11) were named as N2 group.

D1 dissection was performed by including the small and greater omentum, with either a total or a subtotal resection of the stomach that contained lymph node stations 1-6. Spleen or pancreatic tail resections were included only in case of tumor invasion. D2 dissection was done by inclusion of the omental bursa, transverse mesocolon anterior leaf and complete excision of the gastric vascular pedicle contain 7-8-9 station lymph nodes. Spleen and/or pancreatic tail resection was applied in invasive tumors for complete clearance of stations 10 and 11.

Statistical Analysis
Statistical Package for the Social Sciences (SPSS) 15.0 for Windows program was used for chi-square, analysis of variance (Mann-Whitney U and Kruskal-Wallis) nonparametric tests in terms of statistical significance, with a p value of <0.05 considered as statistically significant. When investigating the relationship between two numerical variables, Spearman’s correlation coefficient was used.

Table 1. Patient demographics, tumor properties and type of surgery according to dissection type

Table 2. Co-morbidities and other factors 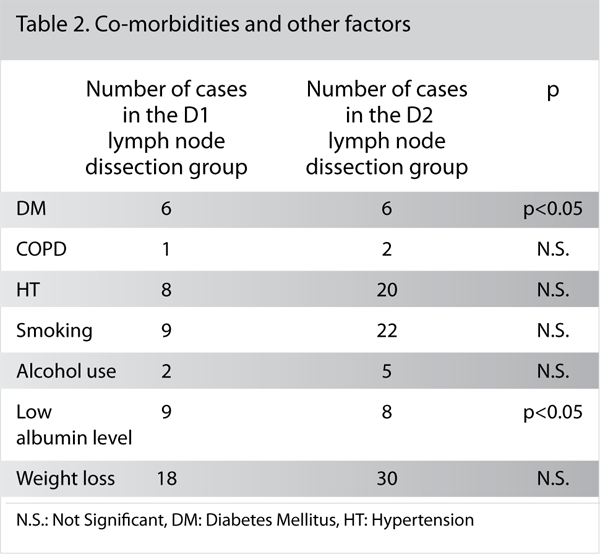 Table 3. Relation between dissection type and morbidity and mortality 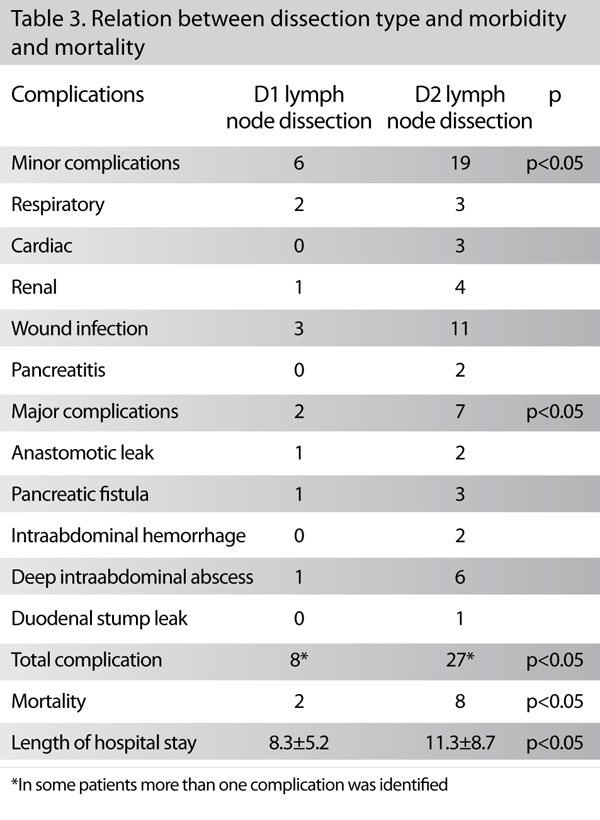 Table 4. Relation between splenectomy and complication and mortality 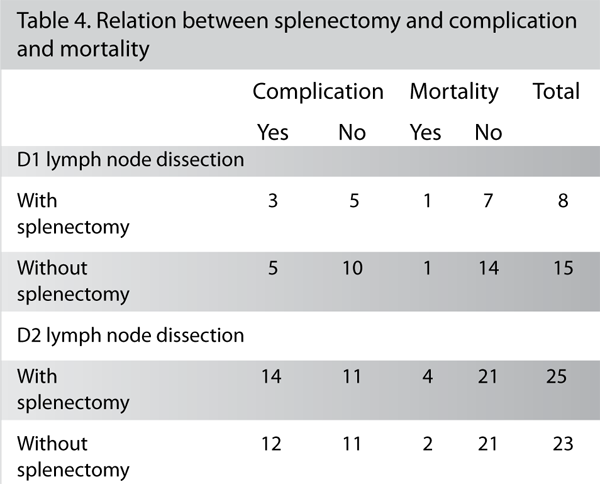 It is certain that in developing countries such as our country, morbidity and mortality related to gastric surgery is affected by other factors with significant impact on surgical strategy. First, early detection and screening programs that evaluate patients with a high risk of gastric cancer is neither common nor effective in our country at the desired level, as they are in Japan and some European countries. In studies conducted in Europe and America, 30% of patients have advanced gastric cancer, while this rate is around 21% in Japanese series (2, 3). In our series, advanced gastric cancer accounted for 58% of cases. The un-identification of high risk patients at an early stage by screening methods does not only increase the extent of surgical technique and lymph node dissection, but it also increases the effects of patient related factors such as late referral, advanced age, presence of serious underlying diseases, low levels of hemoglobin and protein levels, tumor localization and depth, decreasing the chance of curative surgery that has a direct effect on morbidity and mortality and in a way alters surgical strategy.

The most important point that makes early diagnosis vital for the treatment of gastric cancer is lymph node involvement. Studies have shown that even in early gastric cancer, lymph node involvement rate is between 5.7-13%. The necessity and effectiveness of extended lymph node dissection is discussed, even in this group of patients. It is known that if the tumor is limited to the mucosa lymph node involvement risk is 3-5%, if it is limited in the submucosa lymph node involvement rate is 11-25%, the lymph node involvement rate is 50% in T2 tumors, and in T3 tumors the rate increases to 83% (4, 5).
Another controversial point is the extent of the surgery. Japanese surgeons claims on longer overall survival and postoperative disease-free survival following perigastric, celiac, and splenic lymph node resection is doubted in the Western world, especially in America and studies on this issue are still in progress (6, 7). We also compared our gastric cancer patients, who underwent different approaches in terms of both gastric resection and lymph node dissection, for early postoperative morbidity and mortality. Nevertheless, when interpreting this comparison we have taken into account the facts that our patients were not detected by screening programs but consisted of patients with gastrointestinal complaints, that imaging methods applied for preoperative staging were not reported in light of standard expertise, that a significant portion of our patients was elderly, and with an advanced stage. We believe that, accepting surgical intervention or the extent of lymph node dissection as the only factors contributing to postoperative morbidity and mortality in our patient group would be incorrect.

During our review of the literature, we observed that Romania, a developing country as ours, showed in their 468 patients with gastric cancer that the patient’s age, hemoglobin and protein levels and previous Billroth II operation had a significant effect on morbidity. Factors like gender, TNM stage, extent of surgical intervention, D1 or D2 lymph node dissection were not related to morbidity. Mortality was significantly higher in older age and male patients, and it was emphasized that low hemoglobin and protein levels, TNM stage determined by pathology, type of surgery and extent of lymph node dissection did not have an effect (8).

The mean age was 62 years in our series, 33 patients (46%) were found to be older than and 38 patients (54%) were younger than 65 years. Advanced age was not found to be a significant factor effecting morbidity and mortality in our series. Similarly, the male and female genders did not show a significant difference in terms of morbidity and mortality.

Another point of contention among Japanese and the Western world is the requirement of including organs such as the spleen and the pancreas in the surgical specimen. The principle defending that splenectomy should be included in the procedure is based on the opinion that effective dissection of lymph nodes around the splenic hilum and the splenic artery can be achieved by this method. The possibility of splenic involvement in proximally located gastric cancer is approximately 10%. Those opposing splenectomy base their theory on the facts that there is no significant prolongation in survival in those with splenectomy, besides a significant increase in the frequency of postoperative complications. Another hypothesis favoring this opinion is the belief that the spleen reduces the risk of early postoperative recurrence by suppressing tumor growth factor (5, 9).