Biochemical and histopathological changes of intra-abdominal hypertension on the kidneys: Experimental study in rats

Objective: In this study, biochemical and histopathological changes in renal functions were investigated to evaluate the effects of experimentally induced intra-abdominal hypertension.

Material and Methods: Thirty male Wistar albino rats were used in this experimental study. Rats were divided into four groups. Group 1 (control group, n=6) were only anesthetized. After the anesthesia, a 20 G intracatheter was introduced intraperitoneally to Group 2 (sham group, n=8), Group 3 (n=8) and Group 4 (n=8). Intra-abdominal pressure application was not performed in Group 2. We applied 20 mmHg intra-peritoneal pressure to Group 3 and 30 mmHg to Group 4 for 3 hours. After withdrawing 3 mL intracardiac blood from all groups, the kidneys were removed for histopathological examination. Serum urea and creatinine levels were measured in all groups.

Results: In the biochemical examination, blood urea and creatinine levels were statistically different among all groups (p<0.05). Serum creatinine levels in group 3 and serum urea and creatinine levels in group 4 were significantly increased. In the histopathological examination, the kidneys in Group 1 and Group 2 were evaluated as normal. In Group 3 congested areas were detected in the glomeruli and interstitial regions. In addition to these findings seen in Group 3 dilatations were detected in the pelvicaliceal structures and proximal ureters in Group 4.

Conclusion: When intra-abdominal pressure is increased, the levels of serum urea and creatinine are increased, because the kidneys were damaged. Foci of hemorrhage in interstitial area, dilatations in the proximal ureter, renal pelvis and lymphatics were the pathologic findings seen in the kidneys.

Normal intra-abdominal (IA) pressure is equal to or lower than the atmospheric pressure in animals making lung respiration [1, 2].

Clinically intra-abdominal hypertension (IAH) manifests with respiratory distress and low urine output despite volume resuscitation, together with abdominal distension. The presence of organ dysfunction in addition to IA pressure elevation is defined as “Abdominal Compartment Syndrome (ACS)”.ACS is fatal if not treated [3, 4]. Clinical and experimental studies contributed to better understanding of the effects of IAH and physiology of ACS, thus underlining the importance of urgent decompression [5, 6].

The kidneys are susceptible to intra-abdominal hypertension due to their anatomic location and blood supply [7]. The first response to IA increase is oliguria. Oliguria develops when IA pressure exceeds 15-mmHg, and pressures over 30-mmHg lead to anuria [8].

The study was initiated after obtaining an ethical board approval from Gaziantep University Medical Faculty Ethics Board (Approval No: 06-2008/124, Date: 30.06.2008).

This study was planned in Gaziantep University Medical Faculty Department of General Surgery. The specimen were evaluated at the pathology laboratory.

The study includes 32 male Wistar albino rats with weights between 250-300 grams and fed with a standard diet under similar conditions.

The subjects were randomized into four groups. Two rats from the control group that died during experiments were excluded. Group 1 (control) contained 6 rats, ant the other Groups (Group 2, Group 3, Group 4) 8 rats each.

Group 3 (First Study Group): Following induction of anesthesia a 20 G catheter was replaced, creating a 20 mmHg intra-peritoneal pressure with an insufflator (Figure 1). At the third hour of experimentally induced IAH, 3 mL intracardiac blood was withdrawn. Both kidneys were removed and preserved in 10% formaline solution.

Group 4 (First Study Group): Following induction of anesthesia a 20 G catheter was placed, creating a 30 mmHg intra-peritoneal pressure with an insufflator. At the third hour of experimentally induced IAH, 3 mL intracardiac blood was withdrawn. Both kidneys were removed and preserved in 10% formaline solution (Figure 2).

In this experimental study, the IA pressure in rats was created by insufflation of CO2 into the abdomen. In this manner, the pressure was diffusely distributed throughout the abdominal cavity and target pressure levels were precisely reached.

The blood samples that were withdrawn for biochemical analysis were kept in room temperature for half an hour for clotting and centrifuged for 5 minutes in 5000 rpm. Serum urea and creatinine levels were measured for all the subjects.

The kidney tissues were cleared with xylol after dehydration with alcohol and embedded in paraffin blocks. Sections of 5-µmthickness were cut from tissues and deparaffinized. They were stained with Hematoxylin eosin and evaluated under light microscopy for histopathology.

Statistical analysis
Serum urea and creatinine levels were stated as descriptive statistics, median (minimum-maximum) values. The groups were compared by the Kruskal Wallis test, if this test failed to show any difference between the groups, then they were compared in pairs by Mann-Whitney U test. Statistical analysis were done by SPSS 15,0 for Windows, a value of p<0,05 was accepted as significant.

Serum urea and creatinine levels of all groups are shown in Table 1 as median (minimum-maximum) values.

The groups showed significant difference in their urea (p=0.004) and creatinine (p<0.001) levels. The serum urea and creatinine levels were elevated as the IA pressure increased. 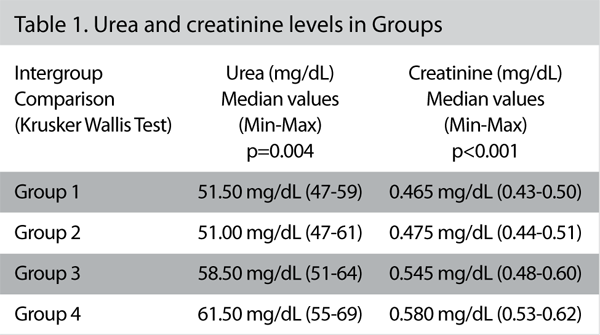 Table 3. Histopathologic findings of the Groups

Although a higher IA pressure was applied in Group 4, there was no significant difference between Group 3. 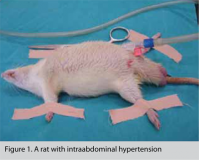 Figure 1. A rat with intraabdominal hypertension
× 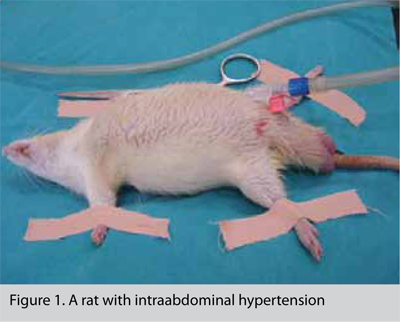 Figure 2. Macroscopic appearance of kidneys from a rat in Group 4
× 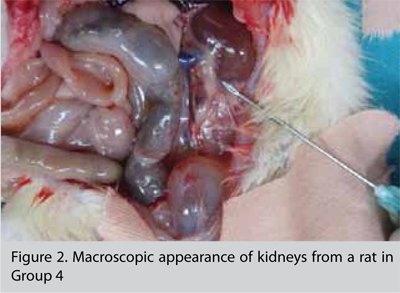 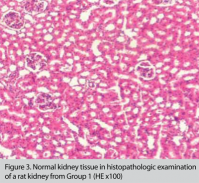 Figure 3. Normal kidney tissue in histopathologic examination of a rat kidney from Group 1 (HE x100)
× 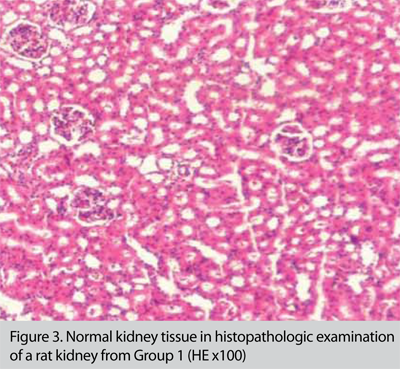 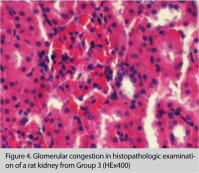 Figure 4. Glomerular congestion in histopathologic examination of a rat kidney from Group 3 (HEx400)
× 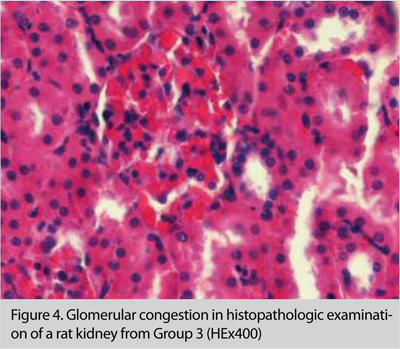 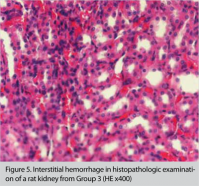 Figure 5. Interstitial hemorrhage in histopathologic examination of a rat kidney from Group 3 (HE x400)
× 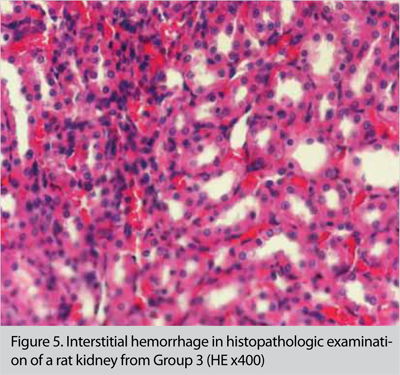 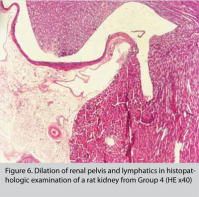 Figure 6. Dilation of renal pelvis and lymphatics in histopathologic examination of a rat kidney from Group 4 (HE x40)
× 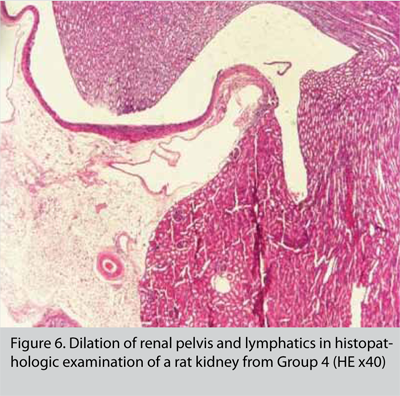 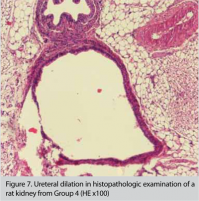 Figure 7. Ureteral dilation in histopathologic examination of a rat kidney from Group 4 (HE x100)
× 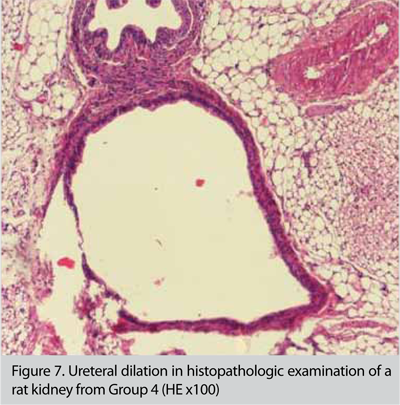 The intra-abdominal pressure can be monitored via a Foley catheter. It is emphasized that the IA pressure increase may lead to organ dysfunctions and it can be fatal if not treated [11]. Various studies have shown that IAH is a common problem amongst critically ill patients [6, 12]. IAH emerged as a current investigation area, based on the facts that it is now accepted as a main factor to contribute to morbidity and mortality in intensive care patients and that laparoscopic procedures are evolving [2, 13].

Oliguria and anuria refractory to fluid replacement, diuretics and dopaminergicsupport are renal signs of ACS [2, 3, 8, 14].When IA pressure exceeds over 15 mmHg oliguria develops, and over 30-mmHg anuria is expected [8]. In experimental studies, in normovolemia, if the intra-abdominal pressure exceeds 20 mmHg the GFR decreases 75%, and over 40 mmHg it decreases by 100%. The decrease in glomerular filtration rate is refractory to volume load. The renal changes seen in IA pressure increase are due to the compression on the renal vessels and kidney parenchyma rather than decrease in cardiac output. We believe the congestion areas seen in glomeruli and interstitium are the result of compression due to IA pressure increase. The dilatation in renal pelvis and proximal ureter is thought to result from compression on the ureters.

Ma et al. [15] reported that when IA pressure increases, the urinary output is significantly impaired and serum creatinine levels increase. Küçük et al. [16] stratified their 25 patients with increased IA pressure into four groups according to their pressure levels, finding out that the group with IAP of 31-40 cm H2O had a significant increase in urea and creatinine levels they concluded that the critical threshold for decompression is 30 cm H2O (1 cm-H2O=0.735 mmHg). In our study, serum urea and creatinine levels were significantly higher in the second study group as compared to controls. Although the increase was significant the levels were within the normal range, we believe the reason to be the experiment period was limited because the subjects could not resist longer durations of high pressures.

In conclusion, it was found that experimentally induced IAH in rats has significant biochemical and histopathologic effects on kidneys. Patients with increase in IA pressures should be carefully monitored in order to prevent formation of these adverse effects on kidneys. We think early surgical intervention should always be kept in mind for ACS.

The study results show that as normal intra-abdominal pressure increases, serum urea and creatinine levels significantly increase. Histopathologic glomerular congestion was observed together with IAH. IAH resulted in interstitial hemorrhage foci in kidneys. It was seen that it resulted in dilation of the proximal ureter with compression to the ureters. Additionally, dilation was seen in the renal pelvis and lymphatics.

Ethics committee approval was received for this study from the ethics committee of Gaziantep University School of Medicine (30.06.2008, 06-2008/124).