Robot assisted laparoscopic (RAL) gastrectomy: case series and a review of the literature

Gastric cancer is the fourth most common cancer type and is the second leading cause of cancer deaths worldwide [1, 2]. It is seen two times more common in men than in women. Anatomically they are divided into two groups, “cardia tumors” and “non-cardia (fundus, corpus, antrum) tumors”. All over the world non-cardia tumors are the most commonly seen, although in recent years, a reduction in the incidence of these tumors is observed [3]. Currently, H. pylori infection, high salt content and smoked food consumption, less consumption of fruit and vegetables, smoking, achlorhydria and gastric atrophy, are risk factors for non-cardia tumors whereas male gender, white race, smoking, obesity and gatrooesophageal reflux disease are considered as risk factors for cardia tumors [4-6]. Approximately 10% of all patients with gastric cancer have a family history.

Gastrectomy and lymphadenectomy is the current treatment for gastric cancer. Although the debate continues, D2 lymph node dissection has become standard in many centers [7, 8]. The main objective of this approach is to obtain proper staging and increase the survival. Surgical treatment may be done by conventional (open) surgery, but it may also be accomplished with laparoscopic surgery. Kitano et al. [9] conducted the first laparoscopic gastric surgery in 1991. Some centers reported that laparoscopy could be applied in early stage gastric cancer, with similar results obtained in terms of oncological principles in minimally invasive surgery as compared to open surgery [10-12]. In addition, postoperative patient comfort was shown to be better in laparoscopic surgery.

The first robot approved by The U.S. Food and Drug Administration (FDA) in 1994 was the Automated Endoscopic System for Optimal Positioning (AESOP). In this way, the surgeon did not need a camera-holder and could keep the camera image at any position by voice command, making the operation easier to perform [13].

The da Vinci S® Surgical System (da Vinci S® Surgical System- Intuitive Surgical, Sunnyvale, CA, USA) has been approved by the FDA in 2000, and it is considered as the current robotic surgical system since then. After initial use of the first robotic surgical system in cardiac surgery effectively, attempts began in the fields of urology and general surgery. Himpens et al . [14] published their first tele-surgery laparoscopic cholecystectomy case completed with a prototype robotic system in 1998 . In robotic systems, laparoscopic instruments that have improved movement abilities and its applicability is easier. Robotic tool tip due to the nature of the increased freedom of movement of the surgeon’s hand and wrist movements can be completely transferred to the surgical environment [15].

The first successful robotic surgery for gastric cancer has been reported from Japan in 2002 and since then the use of robots in this area has increased over time [16]. This study aimed to present five patients who underwent RAL gastrectomy for gastric cancer with review of the literature.

In this study, five patients who underwent robot-assisted laparoscopic (RAL) gastrectomy in Ümraniye Training and Research Hospital, General Surgery clinics between the years 2010-2011 in were assessed. Preoperative clinical staging of patients was done by computed tomography. All patients were informed about robotic surgery and informed consent was obtained. 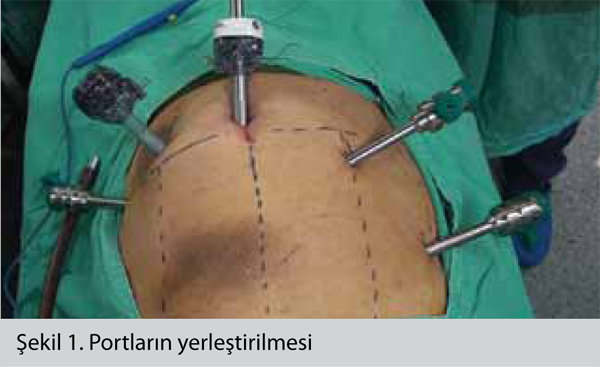 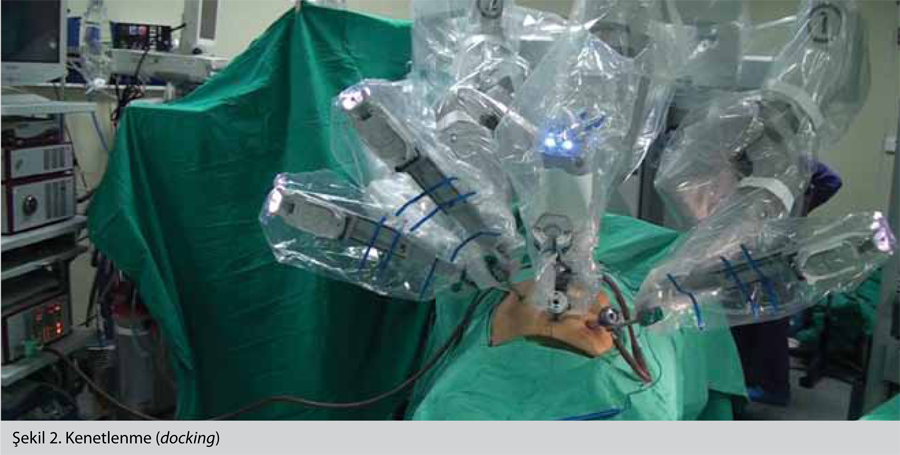 The gastrocolic ligament was entered and left gastroomental vessels were ligated and cut with vascular occlusive clips (Hem-o-lok® Ligation System-Teleflex Medical, NC, USA). The greater curvature was dissected, and the short gastric vessels and left-right gastroepiploic vessels were clipped and cut. Dissection of 6th region was performed. The small omentum was opened, 5th region dissection was performed. The duodenum was separated with help of a linear cutter-sealer stapler. Dissection of the main hepatic artery, celiac trunk, splenic artery and splenic hilum lymph nodes were performed. In subtotal gastrectomy D2 lymph node dissection was completed with dissection of lymph nodes outside stations 2 and 4a. An abdominal incision of approximately 7 cm was made above the umbilicus and the specimen was extracted. Reconstruction was performed by applying Roux-en-Y oesophagojejunostomy in total gastrectomy, and Roux-en-Y gastrojejunostomy in subtotal gastrectomy.

Four of the patients were male and one was female. The mean age was 72.8 years (range: 60-79). Three patients underwent total gastrectomy for proximal gastric cancer, and 2 patients received subtotal gastrectomy for gastric cancer localized distally. None of the patients required transition to conventional laparoscopy or laparotomy. No intraoperative complications were encountered. One patient had a right sided pneumothorax in the postoperative period, which was treated with tube thoracostomy. Another patient developed a surgical site infection that was treated with routine surgical dressings and appropriate antibiotics. The mean length of hospital stay was 10.4 days (range: 7-18). Histopathological examination revealed negative surgical margins except for one patient (Table 1).

Minimally invasive surgeries have led to radical changes in the surgical field in the last few decades. Since the first laparoscopic cholecystectomy performed in 1987, laparoscopic surgery has become widely accepted in many surgeries. Decreased postoperative pain, being able to return to daily activities earlier and better cosmetic results are the main advantages of laparoscopic surgery.

Although it has been shown in many studies that open surgery and laparoscopic surgery have similar oncological results, it is observed that conventional minimally invasive surgery have not gained acceptance for gastric cancer surgery because especially D2 lymph node dissection is a complex surgical technique [11]. Some technical disadvantages unique to conventional laparoscopic surgery are also known to cause this condition. Non-fixed two-dimensional camera, straight instruments with restricted mobility, increasing pathological handshaking, and movement of instruments in the opposite direction of hands (fulcrum effect) are among its major disadvantages.

The da Vinci Surgical System has been developed to overcome the disadvantages of conventional laparoscopic surgery. This tele-robotic system consists of three main independent components [13, 17].

The first part is the console where the surgeon sits (surgeon’s console). The surgeon will place their hands according to the controller and creates a surgical interface with the computer. The three-dimensional imaging system forms another part of the console. There are two handgrips and four pedals that move robotic arms, focus the camera and move other robotic instruments [15].

The second component, imaging portion, has a dual light source and dual three -chip camera. The dual camera is placed at the tip of an endoscope and provides three-dimensional image, there are two independent 5 mm telescopes in addition to the 12 mm telescope [15].

The last part is the patient -side cart. There are three instrument arms and one camera arm located in this unit. Specially designed, 4 multi -jointed robotic arms can move like the human hand. The center arm handles the camera, while others carry surgical instruments [15]. The tip of the instruments is designed to mimic the wrist. They are capable of motion in seven directions, articulation in 180° and rotation in 540°. The robot is approximated to the operating table and connected to three ports [13 , 18]. As the instrument moves inward, the outside arms get shorter and thus clashing of robotic arms is prevented. The rate of reflection of movement into the abdomen is 2/1, 3/ 1 or 5/1.

The surgeon sits at the console and places his/her fingers to manipulators that move the instruments. The surgeon’s hand movements are transferred to the robotic arm through computer software with elimination of tremors. The system provides a magnified three-dimensional high-resolution image. In this way, maneuvers like fine dissection and intracorporeal anastomosis becomes easily applicable. Ultimately, the da Vinci surgical system offers surgeons to perform minimally invasive surgery in a more ergonomic way.

RAL surgery has some disadvantages as compared to conventional laparoscopic surgery. Foremost among these is the lack of tactile and tissue tensile strength sense. Therefore, movement of the instruments and traction with robotic arms can easily damage tissues. The necessity of an experienced surgical team, additional surgical space requirement and the high cost of robotic surgery are other major disadvantages of robotic surgery.

In a study comparing the learning curve for conventional laparoscopy and robotic surgery, it has been shown that the learning curve for laparoscopic surgery is steeper and adaptation to RAL surgery is easier [22]. It is expressed that surgical manipulation ability is gained faster in robotic surgical system due to easier maneuver ability and efficiency can be achieved in a shorter period.

On the other hand, this constant operation field constitutes the main indication for robotic surgery. Dissection of splenic vessels can be easily performed through a larger image, the absence of tremor, and fine movements of robotic arms. During spleen preserving D2 dissection, small branches of the splenic vessels can be easily exposed and maintained. Isolation of the diaphragmatic crura and en bloc resection of cardia lymph nodes can be performed easily with robotic instruments. A mini-laparotomy is required to extract the large specimen with the stomach, lymph node stations, and omentum. This mini- laparotomy is not thought to reduce the benefits of laparoscopy. In fact, the size of the incision is small, or in other words, its size is acceptable according to the specimen size [22, 23].

In conclusion, RAL surgery is a recently developed minimally invasive surgical technique offering more advanced manipulation capabilities than laparoscopy and three-dimensional imaging. Similar oncologic results were obtained by RAL gastric surgery as compared to open and laparoscopic approaches. RAL surgery provides subjective benefits like higher quality images, and gives the chance for a more comfortable dissection. Despite the reported advantage, RAL surgery is not a less invasive method compared to conventional laparoscopic surgery. So far, the superiority of RAL gastric surgery to conventional laparoscopic surgery has not been shown. It is yet early to make a comment because there are only limited studies, and inadequate follow up. Prospective randomized studies are needed for long term research investigations.