Adult intussusception, which is a rare condition, generally requires surgical treatment. A 25-year-old-male with abdominal pain was diagnosed as ileal intussusception with computerized tomography. The patient underwent diagnostic laparoscopy, laparoscopic small bowel resection and anastomosis. The pathologic evaluation revealed heterotopic gastric mucosa. Heterotopic gastric mucosa is rarely seen in ileum and is difficult to diagnose preoperatively. Excision is the choice of treatment. Laparoscopic treatment can be preferred in adult intussusception even in urgent cases.

Adult intussusception represents 5% of all intussusceptions. Almost 90% of adult cases of intussusception are secondary to pathological conditions such as carcinomas, Meckel’s diverticulum, strictures or benign neoplasms which are usually discovered intraoperatively [1]. Therefore, 70-90% of adult intussusception cases require surgery rather than decompression. A 25-year-old male was admitted to the hospital with a sudden-onset, severe abdominal pain, nausea and vomiting. He had experienced low-grade episodes of intermittent abdominal pain for one year. The patient had undergone appendectomy 6 months ago. There was no history of gastrointestinal bleeding or jaundice. Physical examination revealed tenderness and guarding in the lower abdominal quadrants. The white cell blood count was 13.000/mm3 and C-reactive protein 8.9 mg/dL. Abdominal ultrasound showed intussusception of bowel segments. Abdominal computerized tomography (CT) revealed ileoileal intussusception (Figure 1). There was no additional pathology in the CT examination. The patient underwent urgent surgery because of the risk of necrosis. First a diagnostic laparoscopy was performed. Intussusception of ileal segments was seen without any necrosis (Figure 2). No other intraabdominal pathology was observed. Laparoscopic ileal resection was performed for intussusception. Pneumoperitoneum was established via the 12 mm trocar which was inserted above the umbilicus. Then two 5 mm trocars (left lower quadrant, right lower quadrant) and one 10 mm trocar (right upper quadrant) were inserted. Endoscopic stapler was inserted from the 12 mm trocar. A small intestinal segment of approximately 10 cm long including the intussusception was resected (Video 1. See corresponding video/movie images at www.ulusalcerrahidergisi.org). Side-to side anastomosis was created by endoscopic stapler. Stapler entrance incision was sutured laparoscopically. Umbilicus trocar incision was extended up to 2 cm and the resected bowel segment was extracted. The duration of the operation was 80 minutes. The microscopic features of the resected segment revealed heterotopic gastric mucosa. The patient had an uneventful recovery; he passed flatus on postoperative day (POD) 3, commenced oral fluids on POD 4, and discharged on POD 5. The patient was evaluated with gastrointestinal contrast series 6 weeks after surgery and no other pathology was found. Heterotopic gastric mucosa is a well-known entity and may occur through the entire gastrointestinal tract. It is rarely seen beyond the ligament of Treitz [2]. Various inflammatory processes like Crohn’s disease, ulcerative colitis, celiac disease, intestinal neoplasms, post-irradiation enteritis might lead to heterotopic gastric mucosa. Its occurrence as a large symptomatic polypoid mass distal to the ligament of Treitz and presentation with clinical subacute intussusception is extremely rare. Therefore, the preoperative diagnosis is often difficult. Excision of the lesion with clear margins and reestablishing intestinal continuity is the choice of treatment [3]. Laparoscopic surgery is beneficial for intussusception even in urgent cases.

Figure 1. Computed tomography finding of the patient. Ileal intussusception is shown with the white arrow
× 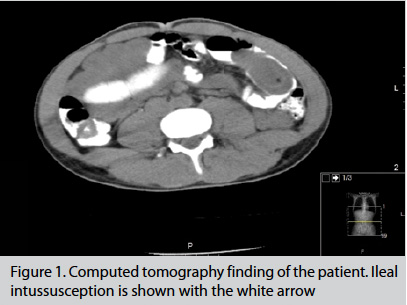 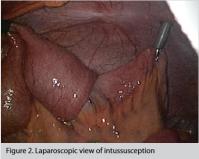 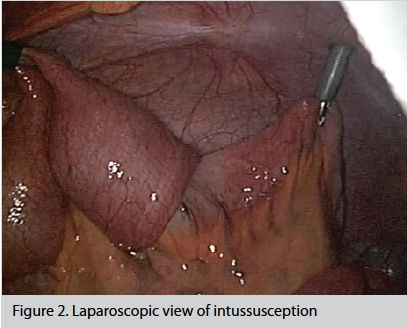 The authors declared that this text has received no financial support.