Objective: Helicobacter pylori (HP) is the world’s most common infectious agent. Despite conventional therapy consisting of proton pump inhibitor (PPI), amoxicillin (AMO) and clarithromycin (CLA), approximately half of the patients remain infected. We compared the PPI-based triple therapy with quadruple treatment (BPMT) including bismuth citrate (BS), PPI, metronidazole (MET) and tetracycline (TET).
Material and Methods: Forty-three patients who used triple therapy (LAC) consisting of lansoprazole (L), AMO and CLA and 42 patients who used quadruple therapy (BPMT) for 14 days between May 2008 and November 2013 were included in the study. The LAC group included patients who received 30 mg L 2x1, 1000 mg AMO 2x1, and 500 mg CLA 2x1 for 14 days, whereas the BPMT group was designed from patients who received 600 mg BS 2x1, 40 mg omeprazole (O) 2x1 or 30 mg L 2x1, 500 mg MET 3x1 and 500 mg TET 4x1.
Results: Demographic characteristics and endoscopic findings were similar in both groups. The eradication rate was 53.4% in the LAC group and 78.5% in the BPMT group (p<0.05). Compliance problems and side effects were significantly higher in the BPMT group as compared to the LAC group (p<0.05).
Conclusion: Due to high antibiotic resistance in Turkey, the efficacy of LAC treatment has reduced. The BPMT protocol should be kept in mind in the first line of treatment, since it provides a higher eradication rate.

Helicobacter pylori (HP) is the world’s most common infectious agent (1). It is an important cause of many gastric pathologies including gastric adenocarcinoma, and has been recently reported to be associated with various hematological, neurological, and cardiovascular diseases (2-6).

Triple therapies, which consist of two antibiotics and a proton pump inhibitor (PPI), have been used as standard eradication treatment for more than 10 years after the discovery of Helicobacter pylori. Amoxicillin (AMO) and clarithromycin (CLA) are the most commonly used antibiotics as part of this treatment (1, 4, 6-28). However, in subsequent years different treatment options have been investigated (29, 30). Especially as it became clear that there was a worldwide increase in CLA resistance, an inclination for different treatments emerged and quadruple protocols containing bismuth citrate (BS) gained acceptance (1, 3, 4, 6-14, 16, 18, 20-24, 26, 31-40). In our country, relevant studies have been conducted and it has been demonstrated that CLA resistance was above 50%, and accordingly the classic triple treatment success rates decreased to unacceptable levels (2, 15, 19, 25, 27, 41).

Despite all these studies, practice treatment alternatives other than the standard protocol have not gained acceptance in daily surgical practice. In our clinic, the quadruple treatment (BPMT) that consists of BS 2 × 600 mg, PPI 2 x 1 (omeprazole (O) 20 mg or lansoprazole (L) 30 mg), metronidazole (MET) 3 × 500 mg, and tetracycline (TET) 4 x 500 mg, all in their oral forms, is being used for 14 days for eradication, for the last 2 years. However, in previous years, all patients received the conventional therapy (LAC) consisting of 2 x 30 mg of lansoprazole, AMO 2 x 1000 mg and 2 x 500 mg CLA. This study was designed to compare these two most preferred treatment protocols in first line HP eradication.

In our country, many hospitals have general surgery clinics with endoscopy units and they are actively working. Since it is the most common infectious agent in the world and it is especially closely associated with gastric cancer, recent evidence-based information on HP eradication should be followed up not only by gastroenterologists but also by general surgeons.

This study was approved by the Ondokuz Mayıs University Faculty of Medicine ethics committee on 26.12.2013, with the approval number of 2013/460.

All patients admitted to our clinic’s endoscopy unit between May 2008 and November 2013 were retrospectively reviewed. Eighty-five patients who were diagnosed with HP by endoscopic biopsy, completed the 14-day treatment period, and who have been tested for eradication by control endoscopy, urea breath test (Heliprob to, Noster AB, Sweden) or HP stool antigen test (Antigen card test, Dialab, Austria) were included in the study. Patients were divided into 2 groups as Group I (LAC) and Group II (BPMT), and they were contacted over the telephone to inform them about the study and to address several questions. Eradication rates, treatment compliance and drug side effects were questioned, and smoking, alcohol, drug history and co-morbidities were evaluated. In addition, pathology reports were examined in detail to assess the presence of precancerous lesions concomitant with HP and the results were recorded.

There were 43 patients in the classical triple therapy (LAC) group, and 42 patients in the BPMT group. Demographic characteristics, co-morbidities, smoking, alcohol and drug history were similar in both groups (p>0.05) (Table 1). A significant difference was not detected between the two groups in terms of endoscopic biopsy findings (p>0.05) (Table 2). 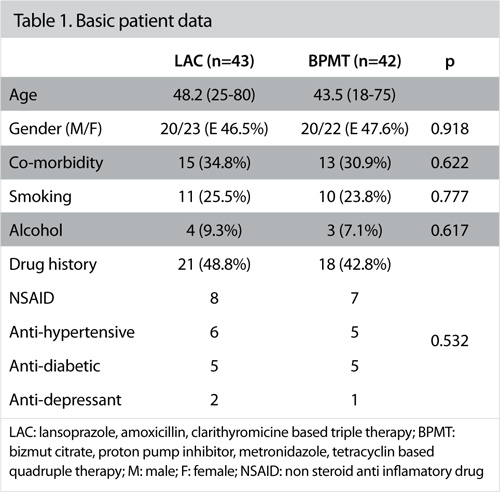 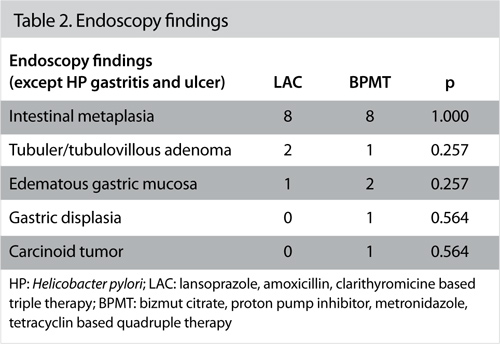 Eleven patients in Group 1, and 22 in Group 2 stated difficulty in treatment compliance (p=0.021). Regarding side effects, 6 patients in LAC group and 18 patients in BPMT group gave a positive response (p=0.007). Dry mouth and metallic taste were the most commonly complained side effects. The rate of eradication success was identified as 53.4% in the LAC group, and 78.5% in the BPMT group, and this group showed significantly higher treatment success (p=0.027) (Table 3). 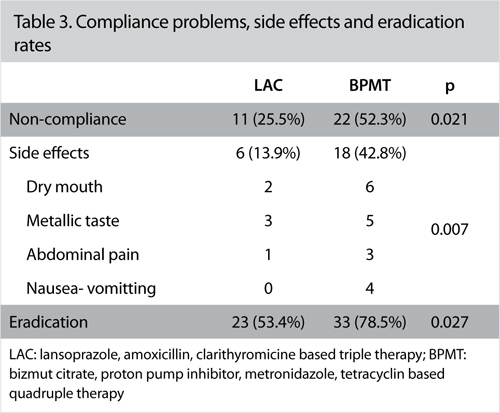 Helicobacter pylori is a gram-negative, spiral bacteria and is the world’s most common infectious agent. It is thought to affect about 50% of the world’s population. It is an important factor in the etiology of gastritis, gastric and duodenal ulcer, gastric mucosa-associated lymphoma (MALT lymphoma), and gastric adenocarcinoma (1-5). In addition, it has been recently reported that HP infection is associated with non-gastrointestinal diseases such as hematologic (persistent iron deficiency anemia, idiopathic thrombocytopenic purpura), neurologic (stroke, Parkinson’s disease, Alzheimer’s disease) and cardiovascular (ischemic heart disease) disorders (6).

There have been major changes in the diagnosis and treatment of diseases such as gastritis and ulcer after the discovery of Helicobacter pylori in 1983 (28). In 1994, the World Health Organization International Agency for Research on Cancer (IARC / WHO) concluded that HP showed a causal relationship with gastric carcinogenesis and was considered as a definite carcinogen in humans, drew all attention on this bacteria (42). The Mongolian gerbil model showed that HP infection stimulates gastric cancer, independent of low-dose chemical carcinogen exposure (43). Especially in observational studies at the beginning of the 2000s in Japan, HP infection has been shown to increase the risk of both intestinal and diffuse types of gastric cancer (28, 44). The estimated risk factor rates attributed to HP for the development of cancer ranged from 50 to 73% (45). In a randomized trial from Colombia that evaluated high-risk patients with precancerous lesions, a significant decrease was detected in gastric cancer in the HP eradication group (45). In another randomized trial conducted in China, it has been shown that HP eradication significantly reduced the risk of gastric cancer among individuals without gastric atrophy, intestinal metaplasia or dysplasia (46). The effects of HP eradication on gastric cancer have been the focus of many interesting studies. In Japan, it has been shown that HP eradication reduced the risk of gastric cancer in the remnant stomach, in patients who underwent distal gastrectomy and Billroth II anastomosis for early gastric cancer (47).

A wide range of therapy protocols are being used for HP eradication. Before the 2000s, the standard triple treatments were said to have up to 95% of success rates (17). However, especially with the increasing resistance to CLA over time, this rate dropped to 55% (21). From there on, there has been an inclination for protocols that contain BS. BS has anti-HP and mucosal cytoprotective effect. Treatments containing BS are expected to be more effective in the treatment of peptic ulcer and HP infection (48). In fact, this activity has been shown by studies (4, 12).

In our study, the two most preferred treatment protocols in first line HP eradication were compared. The PPIs that were used in the BPMT group, O or L, varied according to the physician in charge. According to the literature, there is no difference between the effectiveness of PPIs used for HP eradication (49). Patients were evaluated at least eight weeks after the treatment to assess the success of treatment by control endoscopy, urea breath test or HP stool antigen test. Both of these tests have been reported to have similar results with sensitivity and specificity rates over 90% (50). Therefore, these differences did not influence our results.

There was no difference in the general characteristics or endoscopic biopsy findings of the study patients. When treatment compliance and side effects were evaluated, it was identified that patients in the BPMT group had significantly more complaints. The number of drugs (13 tablets per day) and high doses may explain this finding. The challenge in using the BPMT protocol has already been the subject of several studies (2). The patient should be told to take these antibiotics with plenty of water on a full stomach to reduce the side effects. In addition, the use of probiotics as an alternative approach is being discussed to reduce the side effects of antibiotics and to enhance eradication success (6, 14).

When eradication was evaluated in our study, the success rate was identified as 78.5% in the BPMT group, and 53.4% in the LAC group (Figure 1). This difference was statistically significant. The low rate in the LAC group is compatible with previous studies from our country, and the high rate of CLA resistance may be responsible for this situation (15, 19, 41). In a recent meta-analysis from our country, it was determined that the success rate achieved by triple treatment was 79.4% in 1996, whereas this rate decreased to 61.1% by 2005 (25). Currently, this rate was reported as 50-55% (19). The eradication rate of 78.5% in the BPMT group is far from meeting expectations, although it is quite higher than the LAC group. The increasing MET resistance both in the world and in our country in recent years can be proposed as the reason of this (2, 6, 21).

Figure 1. Eradication rates according to groups
× 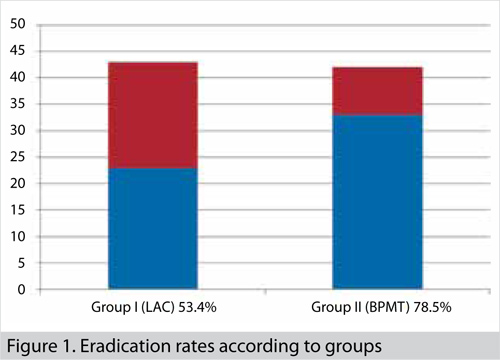 The lack of access in some patients and not being able to obtain sufficient data from some patients who have been treated a certain period of time ago were limitations of our study that prevented our study volume to be higher.

In conclusion, the 14-day BPMT treatment is more successful than the classic LAC treatment for HP eradication. Compliance issues and the frequency of side effects may pose a problem for this protocol, in certain patients. In case of failure of eradication, it would be appropriate to consider different schemes in accordance with the literature.

Ethics committee approval was received for this study from the ethics committee of Ondokuz Mayıs University Faculty of Medicine (26.12.2013, No: 2013/460).

This is a retrospective study. We called the patients that can we reach and explained the reason of our call. Also we gived information about the study.

The authors declared that this study has received no financial support