The presence of endometrial glands and stroma outside the uterine cavity is called “endometriosis”. Recklinghausen first defined this entity in 1896, and Sampson first named it in detail in 1921. Endometriosis is most often seen in the pelvis. Although extrapelvic endometriosis is rare, it can be seen in almost every organ. Endometriosis localized in the rectus abdominis muscle is very rare. A patient who had two previous cesarean sections presented with a 23 mm heterogeneous hypoechoic mass within the rectus abdominis muscle, approximately 1 cm superior to the Pfannenstiel incision that was diagnosed as endometriosis externa by fine-needle biopsy and excisional biopsy. Herein, we report this patient along with the literature.

Endometriosis is a disease caused by the presence of functional endometrial tissue in an anatomical location outside the uterus. It is common among women of reproductive age. It is most common in the ovaries, sacrouterine ligament, rectovaginal septum, and pelvic peritoneum. It may rarely be located to the vulva, vagina, appendix, stomach, liver, chest, bladder, umbilicus and inguinal canal. It has been first reported in 1975 that endometriosis foci may be detected around Pfannenstiel incision scar in patients who underwent cesarean section or gynecological surgery (1, 2). Extra-genital endometriosis accounts for 6% of all patients with external endometriosis. Herein, we report a patient who had two previous cesarean sections and presented with a 23 mm heterogeneous hypoechoic mass in the suprapubic region approximately 1 cm superior to the Pfannenstiel incision and anterolateral to the rectus abdominis muscle, which was diagnosed as endometriosis externa by fine-needle biopsy and excisional biopsy, along with the literature.

A 24-year-old woman presented with complaints of pain and a palpable hard mass in the abdominal wall. On physical examination, a 3 cm mass was detected in the anterolateral region of the abdominis muscle. The ultrasonography revealed a 23 mm heterogeneous hypoechoic mass in the suprapubic region approximately 1 cm superior to the Pfannenstiel incision and anterolateral to the rectus abdominis muscle. The lesion showed arterial blood supply, and this lesion was interpreted as endometriosis. The lower abdominal pelvic magnetic resonance imaging showed presence of minimal fluid within the pelvic cavity. Multiple peripheral millimetric sized cysts were identified in the ovaries. A 3 x 2.5 cm in size lesion, T2W hyperintense as compared to muscle with millimetric hyperintense areas in the peripheral part, was detected within the right lateral rectus muscle bundles approximately 7 cm superior to the pubis. In addition, there was increased signal intensity and moderate fusiform thickening in the rectus muscles around the lesion. The described feature may be compatible with intramuscular hematoma and edema, and was interpreted as endometrioma and related secondary changes. On ultrasonography (USG)-guided fine-needle aspiration biopsy stromal cells on a bleeding and cellular ground and numerous epithelial groups were noted. In between them, histiocytes were observed. Atypical cells were not observed at high magnification. Cytologically, it was considered to be compatible with class III, endometriosis externa and excisional biopsy was recommended for definitive diagnosis (Figure 1). Following sterilizing and draping of the field in the supine position under spinal anesthesia, an incision was made on the right lateral side of the old Pfannenstiel incision. A 2.5 x 3 cm in diameter mass that was located 3 cm superior to the incision was reached within the right rectus abdominis muscle. The lesion was excised together with the surrounding intact muscle tissue (Figure 2). On excisional biopsy endometriosis foci consisting of endometrial stroma and glands were observed between skeletal muscle and smooth muscle bundles (Figure 3). The immunohistochemical staining for keratin that is one of the epithelial markers positive staining was observed in endometrial glands (Figure 4). CD 10 positive staining was obtained in the endometrial stroma (Figure 5), and positive staining were noted for estrogen and progesterone in endometrial epithelium (Figure 6). 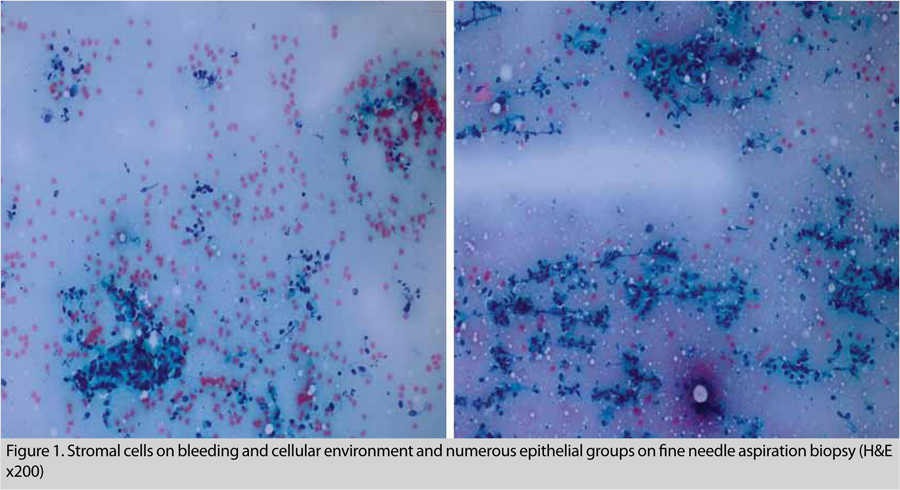 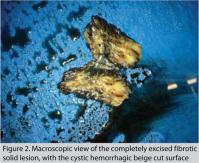 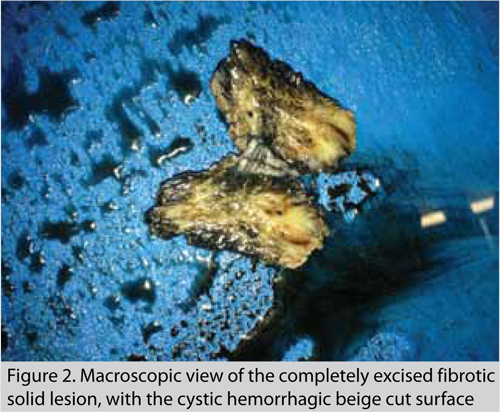 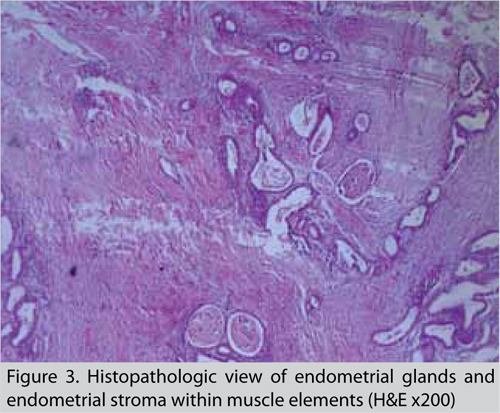 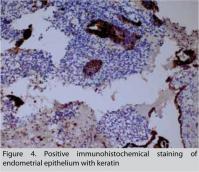 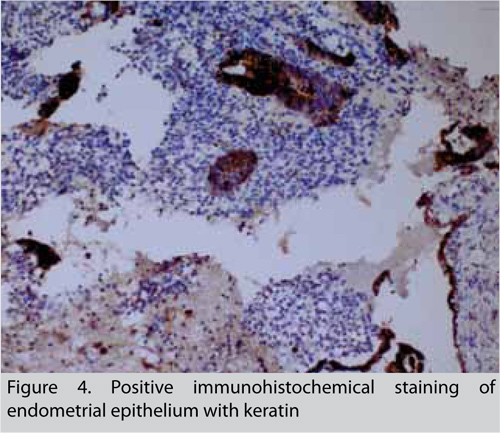 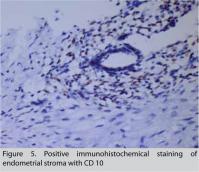 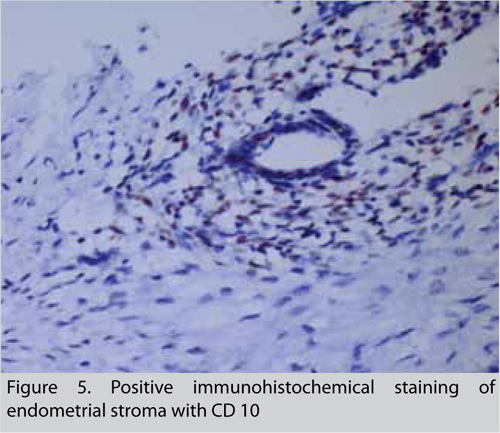 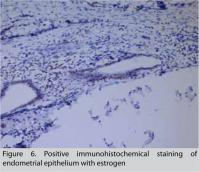 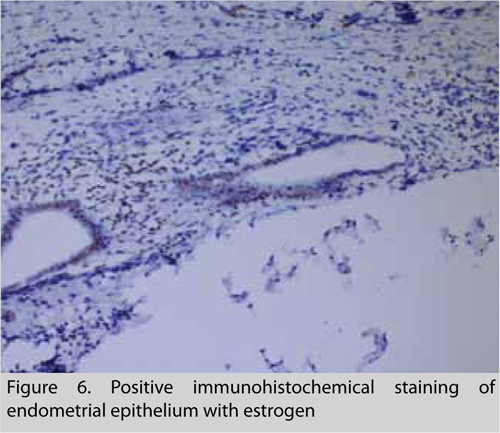 Although many theories regarding its etiology have been suggested, such as the metaplasia theory, induction theory and the transplantation theory, the currently most accepted one is the transplantation theory proposed by Sampson (1-6). This theory is based on the retrograde transport of endometrial tissue that retains vital properties during menstruation (1-3). The development of endometriosis within the peritoneal cavity is explained by retrograde menstruation.

Endometriosis occurring over Pfannenstiel incision in the abdominal wall constitutes 1% of all patients with external endometriosis (7-11). Endometriosis developing in the skin and subcutaneous tissue of the old incision scar emerge as a result of iatrogenic implantation of endometrial cells during gynecological surgery (especially in cesarean surgery). Endometriosis localized in the rectus abdominis muscle is rare. Although many theories have been suggested about the formation of endometriosis, one of the most popular theories for extra-genital endometriosis is the theory of vascular spread (7-13). According to this theory, endometrial cells reach extragenital regions through blood vessels or the lymphatic system resulting in endometriotic foci. Development of primary rectus muscle endometriosis can be explained by this theory.

Abdominal wall endometriomas may appear as cystic, polycystic, mixed, or solid on ultrasonography (2-8). Ultrasonographic appearance of scar endometriomas are nonspecific and their echo pattern may or may not be compatible with menstrual cycle.

In our case, although she had a previous history of cesarean section, the case can be considered as a spontaneous lesion since the lesion was away from the incision at an unrelated site. In this case, the formation of endometriosis can be explained by the vascular theory. Mechanical propagation and transplantation of endometrial cells are both thought to be responsible for the development of endometriosis in surgical sites (cesarean section scars, episiotomy scars, post-hysterectomy vaginal cuff) (6).

Concomitant pelvic endometriosis is detected in 25% of abdominal wall endometriosis, and patients should be considered in this respect (12). In our case, there was evidence of endometriosis on the ovaries.

The preoperative diagnosis of endometriosis is difficult. Ultrasonography, computed tomography, magnetic resonance imaging are less valuable in the diagnosis of endometriosis. The definitive diagnosis can be made by pathological examination after biopsy or excision. Our case was diagnosed with ultrasound-guided fine-needle aspiration biopsy. Previous reports have stated excisional biopsy findings, although cytological findings were not presented. In our case, cytologic findings were presented in addition for the first time.

Ultrasound-guided biopsy should be performed for the differential diagnosis of abdominal wall lesions in women of reproductive age, if their complaints are recurrent and related to the menstrual cycle. Imaging techniques are nonspecific and the diagnosis may be confirmed by needle biopsy. Needle biopsy is helpful both in the diagnosis and in guiding the surgeon during surgery. If the result is reported as endometriosis it should be excised.