Treatment of sleeve gastrectomy leak with an endoscopic stent

Laparoscopic sleeve gastrectomy is used increasingly for obesity treatment. The most important complications of this procedure are bleeding and staple line leak. In this article, a 44-year-old female patient who developed a leak at the gastro-oesophageal junction following a revision laparoscopic sleeve gastrectomy is presented. The leak was recognized by computerized tomography and fluoroscopy that were performed during endoscopy. A fully expandable covered stent was inserted to the leak site. The stent was removed endoscopically after three weeks and the fistula healed completely. Early use of stents is an effective treatment method in leaks that have developed after sleeve gastrectomy.

Laparoscopic sleeve gastrectomy (LSG) is increasingly being applied in the surgical treatment of morbid obesity in recent years. As compared to methods such as gastric bypass or biliopancreatic diversion, laparoscopy is easy to apply and does not cause a major change in body physiology, successful results both in the short and medium term follow-up are the most important factors in this increase. The overall complication rate of LSG is reported as 0-24%, staple line leakage rate as 0 to 5.3% and the mortality rate as 0.39% (1, 2).

Both the diagnosis and treatment of these leaks differ from other leaks. Early surgery, radiological drainage, stents, sutures, clip application, and various methods like tissue adhesive and t-tube external drainage have been defined in its treatment. In this case report, a patient who developed a leak following a secondary obesity surgery and was treated by endoscopic stenting alone was presented along with the literature.

A female patient with a body mass index (BMI) of 39.1 (length: 1.59, weight: 99) was admitted to hospital for obesity surgery due to weight gain. The patient previously underwent a laparoscopic gastric banding six years ago, but the band had been removed with open surgery one year later due to band infection. After removal of the gastric band, the patient stated rapid weight gain. She did not have any concomitant disease. Her physical examination was unremarkable except a midline supra-umbilical incision and port-site scars. The patient was planned to undergo LSG.

The operation was performed in the French position, with the surgeon standing between the legs. The pneumoperitoneum was created by the open approach. Two 15 mm, one 10 mm, and one 5 mm ports and a 300 camera were used. There were intra-abdominal adhesions secondary to previous abdominal operations. All adhesions were separated by an ultrasonic dissector (Harmonic®, Ethicon-Johnson&Johnson). The greater curvature was dissected free of its vessels. The sleeve gastrectomy was completed by using five gold cartridges (Echolon Flex TM 60 mm, Ethicon-Johnson & Johnson), over a 42 F dilator, approximately 4 cm proximal to the pylorus. 2/0 silk serosal sutures were placed over the proximal staple lines. A leak test was performed with methylene blue, which was found to be negative. The operation was completed after hemostasis and placement of a suction drain. The operative time was 165 minutes.

The postoperative period was uneventful. The patient was started on oral liquids on the second day and was discharged on the third day after removal of the surgical drain. On the 5th and 7th day follow-up control by telephone, she did not state any problem. She was admitted to the emergency department with complaints of 39 degrees fever and upper abdominal pain on the 10th postoperative day. Her examination showed no pathological findings other than fever. There was minimal fluid in the left side on her chest X-ray, and laboratory examinations revealed leukocyte level of 15,900/mm3, and C-reactive protein (CRP): level of 13.9 mg/dL. Other tests were within normal limits. A triple-contrast-enhanced abdominal computed tomography (CT) was taken. Free air and inflammation findings were observed in the left upper quadrant near the oesophagogastric junction. There was no contrast leakage (Figure 1). Fluid-electrolyte replacement and antibiotic therapy was started. The patient was planned for endoscopy and fluoroscopic examination under general anesthesia, with a preliminary diagnosis of leakage. A clear fistula site could not be visualized on endoscopy but a suspicious area was observed at the oesophagogastric junction (Figure 2). The second portion of the duodenum was reached. There were no other pathological findings. Radiopaque material was introduced through the water channel of the endoscope, and contrast leakage was detected at the level of oesophagogastric junction (Figure 3). It was decided to place a stent. A fully coated nitinol stent (14 cm long, 2.4 cm wide-Microtech Europe GmbH) was placed under endoscopic and fluoroscopic guidance (Figures 4a and b). The lower end of the stent remained at the level of incisura angularis, but was fully covering the leak site and the procedure was terminated. The patient was followed-up uneventfully after stent replacement. She was started on oral non-fiber liquid diet, parenteral antibiotics and proton pump inhibitors and was discharged to be followed-up in the outpatient clinic. The patient remained stable during follow-up. The inflammatory markers rapidly decreased (5th day WBC: 11,300/mm3, CRP: 5.6 ng/dL, 10th day WBC: 8,700/mm3, CRP: 3.4 mg/dL). The patient complained of melena in the third week after stent replacement, and the stent was removed by endoscopy under sedation. In the examination after removal of the stent, gastric ulcer and digested blood was observed at the level of incisura angularis that was likely to be secondary to compression of the stent (Figure 5). Other staple areas were normal. The patient was discharged on the first day after stent removal. During follow-up there were no additional problems. The patient is at the 9th postoperative month, with no complaints and a BMI of 29.3. 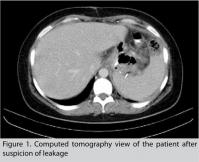 Figure 1. Computed tomography view of the patient after suspicion of leakage
× 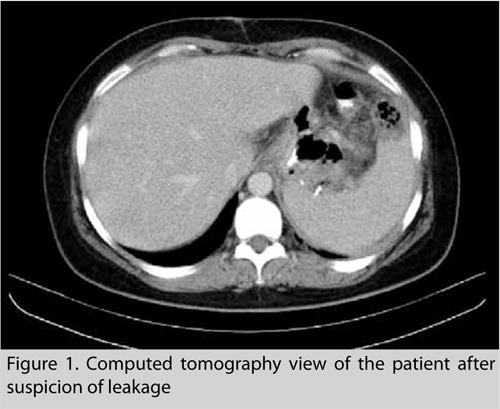 Figure 2. The site thought to be the cause of leakage on endoscopy
× 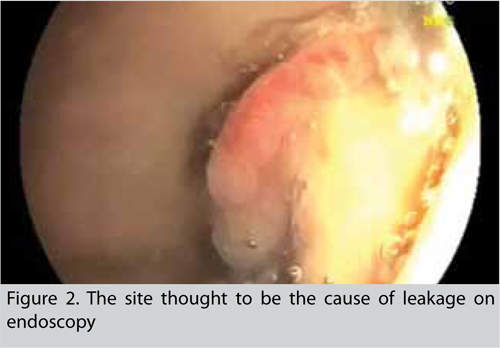 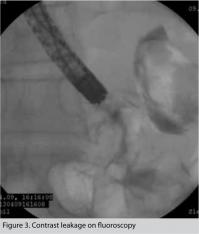 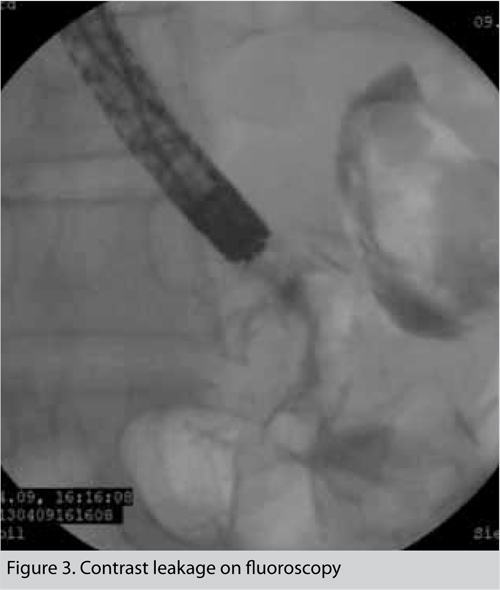 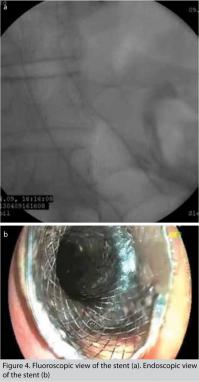 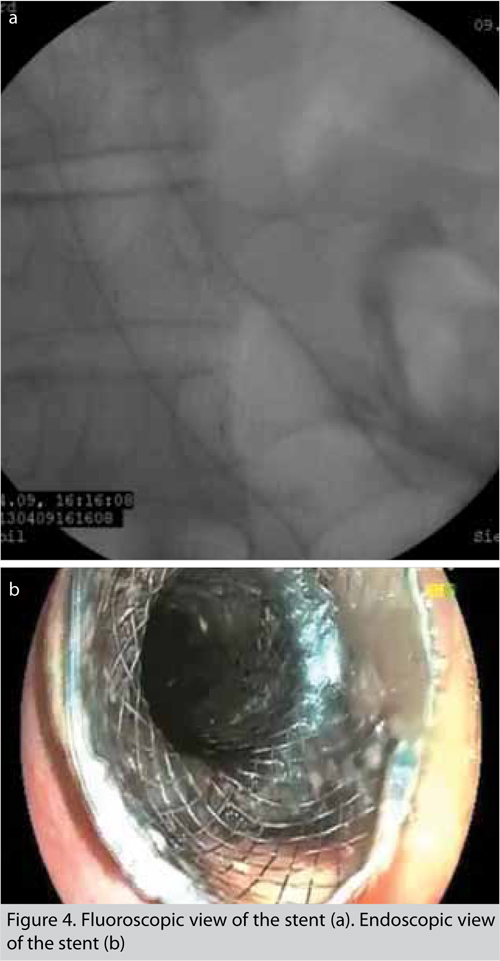 Figure 5. Ulcer site after removal of the stent
× 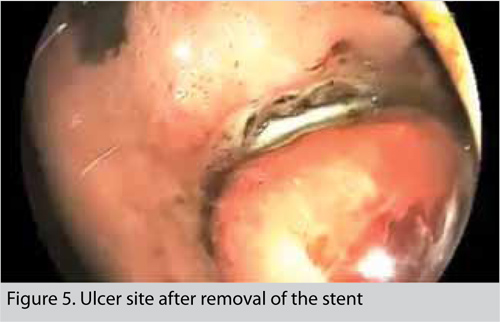 Leaks after sleeve gastrectomy (SG) is the most important cause of mortality, and the mortality rate have been reported as 9.1% in a case series of 44 leaks (1). Up to 75% of these leaks occur at the level of the gastro-oesophageal junction. In multicenter studies, BMI >50, using a dilator with a diameter less than 40F, and revision surgery have been identified as independent risk factors for the development of leaks (1, 3). It was found that staple line supporting materials have no effect in preventing leaks (3-5). Negative leakage tests, either intraoperative or early postoperatively, do not necessarily mean that a leak will not occur (6). Our routine practice is using an intraoperative leak test with methylene blue and use supportive sutures especially in the proximal area. Early contrast studies are performed in clinically suspected cases.

The clinical picture may be very different in these cases. They can remain completely asymptomatic, or present with symptoms such as fever, epigastric pain, tachycardia, leukocytosis, and restlessness. Physical examination findings are not clear. The most important factor in diagnosis is the surgeon’s extreme skepticism. The first test to be performed in patients with suspected leak is contrast enhanced tomography, if the patient’s weight is appropriate. If tomography is not possible, oral contrast radiography or fluoroscopy should be performed. However, not observing pathology in these examinations does not mean that there are no leaks. CT findings such as inflammation, air, and abscess should be considered as indirect evidence of leakage (7). In our case, minimal pain, fever and leukocytosis were detected, and despite lack of contrast leakage, air and inflammation was observed in CT.

The treatment approach varies according to the patient’s clinical status, in cases with a suspected or detected leak. The first thing to do is fluid replacement and antibiotic treatment. Surgical approach should be considered first in early leaks and hemodynamically unstable and/or patients with organ failure symptoms. In other cases, successful results can be obtained with approaches that are more conservative. Percutaneous interventions, endoscopic tissue glue, application of clips, and stent placement are the most common methods. Successful results have been reported in the treatment of leaks after SG with the use of stents. Success rates of 83-94% were reported usually in patients who were detected in the first ten days, in the abscence of generalized peritonitis and severe sepsis, while in cases with late diagnosis the rate was decreased down to 50%. In the series of 29 cases by Himpens et al., the fistula closed in 19 patients after the first stent placement and in 5 patients after the second stent (6-9). Therefore, the early decision to place a stent is accepted as the most important factor in success. The type and diameter of the selected stent is also important. Usually the use of fully covered and as wide as possible metal stents is recommended. Plastic stents are not recommended due to placement difficulties and high rates of migration. The stent should be removed 6-8 weeks after implantation. Removal of the stent at a later period may be difficult due to fibrosis (10). In our case, the stent was removed at the end of 3 weeks. The most important reason for that was the presence of melena, patient desire and challenges of removing stents after a long-term, as previously experienced by our team. Therefore, our routine practice is removal of the stent usually after 4 weeks and re-insertion of a new one, if required. In our case, there was no localized collection in the CT therefore percutaneous or laparoscopic drainage was not used. The patient did not develop any related signs or symptoms during follow-up.

Stent application for leaks after sleeve gastrectomy is a highly successful procedure. High index of suspicion in the diagnosis of leaks, as well as early implementation of endoscopy and stent placement will increase the success rate. Our approach is to remove stents as early as possible.

Written informed consent was obtained from patients who participated in this case.