Objective: Peptic ulcer perforation continues to be a major surgical problem. In this study, risk factors that influence morbidity and mortality in perforated peptic ulcer disease were examined.
Material and Methods: Files of 148 patients who were included in the study due to peptic ulcer perforation between January 2006 and December 2010 were retrospectively analyzed. Data regarding age, gender, complaints, time elapsed between onset of symptoms and hospital admission, physical examination findings, co-morbid diseases, laboratory and imaging findings, length of hospital stay, morbidity and mortality were recorded.
Results: The study group included 129 (87.2%) male and 19 (12.8%) female patients. The mean age was 51.7±20 (15-88) years. Forty five patients (30.4%) had at least one co-morbid disease. In the postoperative period, 30 patients (20.3%) had complications. The most common complication was wound infection. Mortality was observed in 27 patients (18.2%). The most common cause of mortality was sepsis. Multivariate analysis revealed age over 60 years, presence of co-morbidities and Mannheim peritonitis index as independent risk factors for morbidity. Age over 60 years, time to admission and Mannheim peritonitis index were detected as independent risk factors for mortality.
Conclusion: Early diagnosis and proper treatment are important in patients presenting with peptic ulcer perforation.

Peptic ulcer disease (PUD) is a disease that results from an imbalance between aggressive factors such as stomach acid and pepsin and mucosa defense barriers (1). Although the need for elective surgery has decreased as a result of advances in medical treatment, 10% of the patients require surgery. The choice of treatment for peptic ulcer perforation (PUP) remains to be surgery. Currently, the most preferred surgical method is simple closure and omental plug. Different techniques are also applied (2-4). Factors that influence the prognosis of PUP are listed as follows: time to hospital presentation, large perforation diameter, age over 60 years, presence of shock, presence of concomitant diseases and localization of the perforation in the stomach (5, 6). Preoperative hemodynamic shock, sepsis and generalized peritonitis are important factors influencing morbidity and mortality (5-8). In this study, we examined the risk factors affecting morbidity and mortality in PUD.

The files of 148 patients, who were operated on at Dicle University, School of Medicine, General Surgery Clinic as diagnosed with PUD and received primary closure + omentoplasty were retrospectively examined after the obtainment of approval from Dicle University, School of Medicine, Ethics Committee with the date and number 18.07.2012/663. Written consents indicating that they allowed their data to be used in medical research were obtained from all our patients. The patients who underwent different surgical procedures or had malignant ulcer perforations were excluded from the study. The age, sex, symptoms at presentation, time between onset of symptoms and presentation to the hospital, physical examination findings, concomitant diseases, laboratory and imaging findings, hospital stay duration, morbidity and mortality information of these patients were recorded.

The time to presentation was considered to be the time elapsing between the onset of symptoms and presentation to the hospital. Peptic ulcer perforation diagnosis was made on the basis of history, physical examination, routine laboratory studies and radiologic imaging. Patients with concomitant diseases were recorded. Preoperative shock was defined as a systolic blood pressure below 90 mm-Hg (9). 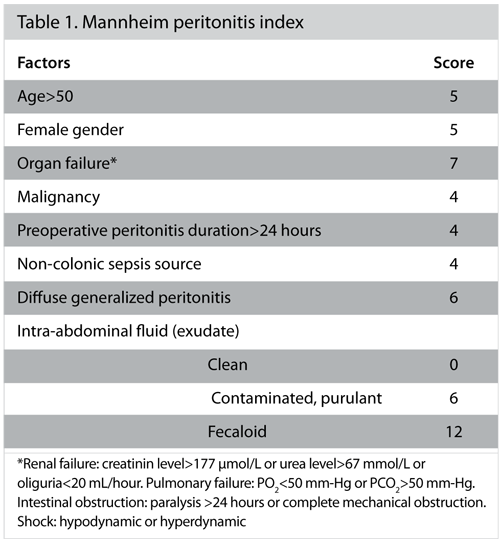 Statistical Analysis
Statistical Package for Social Sciences (SPSS Inc., Chicago, IL, USA) for Windows 13.0 software was used for statistical analysis. The quantitative data were expressed as mean ± standard deviation. Student t-test was used for analysis of parameters and chi-square test for the assessment of different categorical data. To evaluate the risk factors influencing morbidity and mortality, multivariate logistic regression test was used. Odds ratio (OR) was calculated for every variable. A value of p<0.05 for all variables was considered significant. 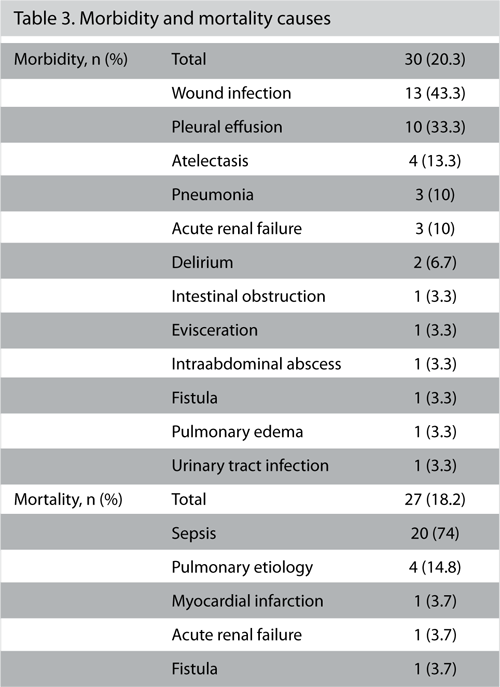 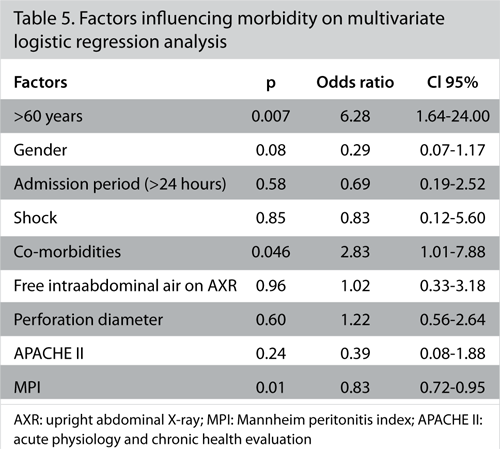 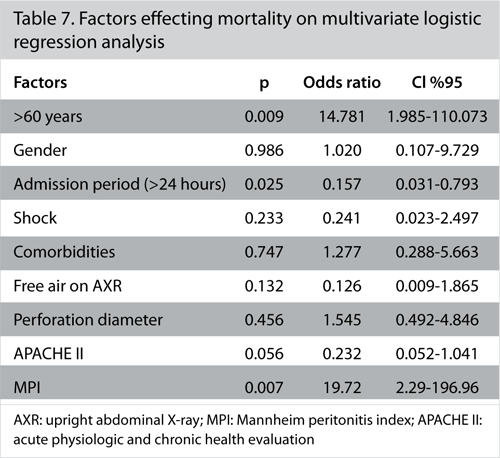 Although the incidence and prevalence of peptic ulcer disease varies, its frequency is estimated to be 1500-3000 per 100.000 people (16). The lifetime possibility for a person to develop PUD is approximately 5% (17). Peptic ulcer disease is a disease with multi-factorial etiology and mostly the use of non-steroid anti-inflammatory drugs and Helicobacter pylori have been kept responsible. The widespread use of H2 receptor blockers and proton pump inhibitors in recent years for the treatment of PUD has resulted in a decrease in elective ulcer surgery (18). In spite of these developments, PUD patients experience perforation at a rate of 7%, and bleeding at a rate of 15-20% per year (19). Peptic ulcer perforation is frequently seen in the 4th and 5th decades and its male/female ratio is in the range of 2-8/1 (12, 20-23). While the mean age of our patients was 51 in a way similar to the literature, the male/female ratio was 9/1.

It was reported that free sub-diaphragmatic air was identified in the direct X-ray images of 47.2-80% of patients with PUP (12, 20, 24). Parallel with these data, 82.44% of the patients in our study were identified to have free air in their X-ray images.

The post-operative morbidity rate in peptic ulcer perforation ranges between 21-42% (9, 12, 25, 26). Pulmonary and wound site infections are often considered among post-operative morbidity reasons. In our study, the morbidity rate was 20.3%. Parallel with the literature, our patients were identified to have wound site infections and pulmonary complications. We found in our study that age above 60, presence of a concomitant disease, MPI ≤26 and perforation diameter were factors that influenced morbidity.

Kim et al. (27) stated that age above 60 and female sex constituted the risk factors that influenced post-operative morbidity. In our study, PUP was often seen among men whereas sex was not a significantly influencing factor for morbidity. In our study, 42% of our patients were above the age of 60. In the univariate and multivariate analysis, age above 60 was identified to have a significant influence on morbidity.

Different results were reported in terms of perforation site in PUD (14, 30). In our study, 101 (68.2%) patients were identified to have a pre-pyloric perforation; however, the influence of the perforation site on morbidity was not significant.

Billing et al. (32) specified that MPI was effective in the prediction of morbidity. Similarly, in our study, we determined that patients with an MPI ≤26 had a significantly lower morbidity rate.

The post-operative mortality rate in peptic ulcer perforation ranges between 4-30% (12, 16, 23, 27, 33, 34). Mortality has been reported to be due to multiple organ failure and pneumonia. In our study, our mortality rate was 18.2%. The most frequent reasons for mortality in our patients were sepsis and pulmonary problems.

The factors influencing mortality in our patients were as follows: age above 60, time to presentation longer than 24 hours, shock at the time of presentation, APACHE II score above 11 and perforation diameter wider than 0.5 cm.

In accordance with publications reporting that the presence of shock at the time of presentation increased mortality, we determined that our patients who had shock on presentation had a significantly increased mortality (7, 8, 12, 23, 35). Therefore, we think that patients presenting with PUP, especially with the presence of a shock, need to be taken into the operating room immediately after the correction of fluid-electrolyte imbalance.

There are various studies in the literature regarding mortality prediction by the APACHE II score (13, 32, 36). In our study, we identified that patients who had an APACHE II score above 11 had a significantly higher mortality.

There are studies stating that mortality rate was higher in perforations larger than 1 cm (37). Similarly, in our study, it was identified in the univariate analyses that the perforation diameter influenced mortality. Although there are publications in the literature reporting a higher mortality rate with peptic ulcer perforations of stomach origin, we determined that perforation site did not have an influence on mortality in our patients (5, 6, 14).

In spite of the developments in peptic ulcer disease treatment, peptic ulcer perforation remains a serious surgical problem. Patients above the age of 60, with a time to presentation longer than 24 hours, presence of shock at the time of presentation and concomitant diseases, and a perforation diameter wider than 0.5 cm are patients at high risk for post-operative morbidity and mortality. MPI scoring system is reliable in predicting morbidity, and MPI and APACHE II in predicting mortality. We believe that close post-operative follow-up of patients under risk can help in reducing morbidity and mortality rates.