Objective: Surgical site infection (SSI) is a common complication after surgery and is a quality of care indicator. Risk factors for SSI are studied thoroughly for most types of gastrointestinal surgeries and especially colorectal surgeries, but accumulated data is still lacking for gastric surgeries. We studied the parameters affecting SSI rate after gastric cancer surgery.

Material and Methods: Consecutive patients, who received elective gastric cancer surgery between June and December 2013 were included.Descriptive parameters, laboratory values and medical histories were recorded prospectively. All patients were followed for 1 month. Recorded parameters were compared between the SSI (+) and SSI (-) groups.

Conclusion: We assume that decreasing BMI to <30, stopping smoking at least 3 weeks before the operation and preventing postoperative weight gain by avoiding excessive IV hydration will all help decrease SSI rate after gastric surgery.

The incidence of gastric cancer has been decreasing throughout the last decades after effective eradication of Helicobacter pylori infection, improved sanitation, refrigeration and a shift towards the consumption of fresh fruit and vegetables rather than red meat and high fat diet (1, 2). Nevertheless, gastric cancer still remains to be the third most common cause of cancer related deaths (3), and gastric cancer surgery is a commonly performed surgery in especially busy tertiary care centers.

Surgical site infections (SSI) are responsible for 38% of nosocomial infections (4, 5), and is one of the most prominent morbidity after gastric surgery. Surgical site infections causes prolonged hospitalization and increased surgery related costs (6, 7). ASA score, wound classification and duration of the operation are the 3 SSI-related factors established by the National Nosocomial Infection Surveillance (NNIS) (8-10). Risk factors for SSI are studied thoroughly for most types of gastrointestinal surgeries and especially colorectal surgeries, but accumulated data is still lacking for gastric surgeries (11, 12).

Our hospital is a tertiary care center with more than 200 gastric cancer surgeries a year. In our clinic, we experience a higher SSI rate than the stated rate (3-16%) for gastric surgeries in the literature (13-15). In this study, our goal is to determine the factors affecting SSI rate after gastric surgery.

Patients and Study Design
The subjects of our prospective observational cohort study were consecutive patients who underwent elective gastric surgery (distal subtotal or total gastrectomy with D2 lymphadenectomy) for gastric cancer. The inclusion criteria were: (1) patients diagnosed with resectable gastric cancer and undergoing laparotomy; (2) being older than 18 years of age; (3) giving informed consent to participate in the study. The exclusion criteria were: (1) signs of a clinically prominent infection detected on the day of admission; (2) an ASA score of ≥4; (3) laparoscopic surgery (seldomly performed in our clinic for gastric cancer surgery).

Data Collection
Patient age, gender, ASA score, BMI, history of co-morbidities as diabetes mellitus (DM) and chronic obstructive pulmonary disease (COPD), type of surgery, anastomosis technique (hand-sutured vs. stapled), operation duration, blood transfusion, ICU admission, tumor stage, body weight on the day of hospital admission, daily changes in body weight postoperatively, length of hospital stay, readmission to the hospital, hospital costs, preoperative and postoperative laboratory studies were recorded prospectively. In the NNIS report, the operation duration was grouped according to the third percentile which was 180 minutes for gastric cancer surgeries (16, 17). We also used third percentile as a cut-off point which was 135 minutes in our study. Patients were followed one month for SSI. They were asked to visit the outpatient clinic on postoperative day 15 and day 30. Although it is not routinely done in our clinic for all surgical site infections, swab culture was obtained from all patients during the diagnosis of SSI for this study.

Definitions
All patients were operated by a single surgeon with more than 25 years of experience. Surgical residents assisted during the surgery and no students scrubbed in. In our institution, we remove hair using a clipper 30 minutes before surgery in the operating room. We use povidone-iodine as the antiseptic solution. For prophylaxis, we use first generation cephalosporins. If the patient is allergic to penicilline then we use fluoroquinolones. In this study, no patient was allergic to penicilline thus fluoroquinolones were never used.

The criterias used to define and classify SSI’s were established according to the guidelines of the Committee of Disease Control (CDC) (Table 1) (4, 18, 19). Our study is designed and conducted according to the Helsinki declaration. 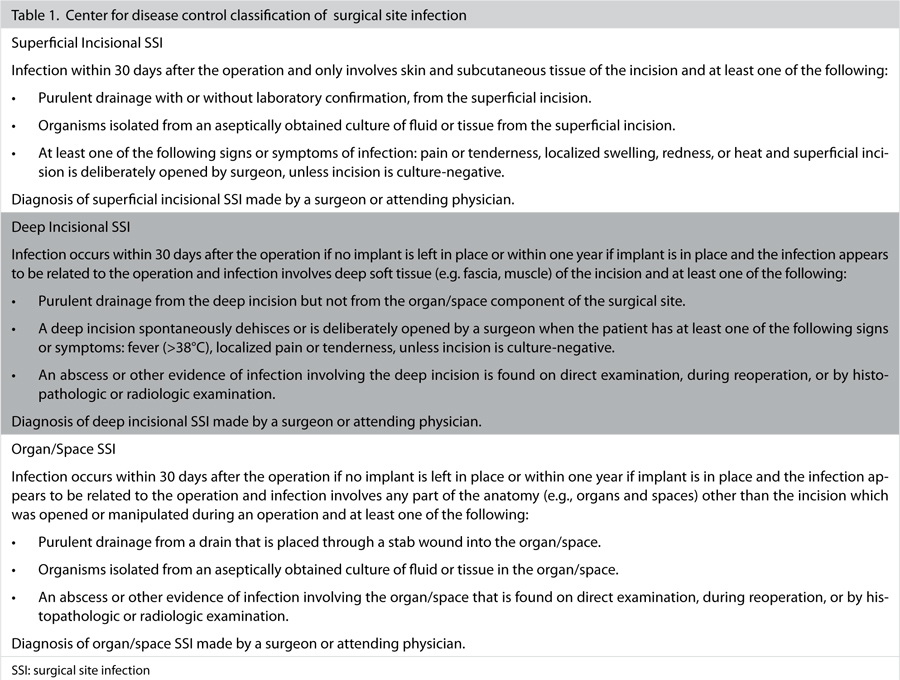 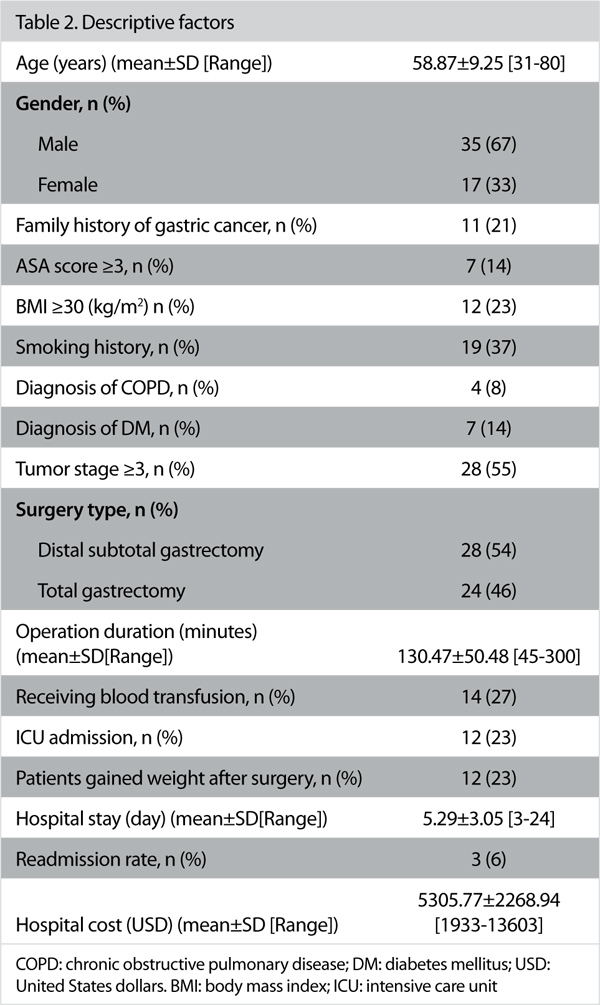 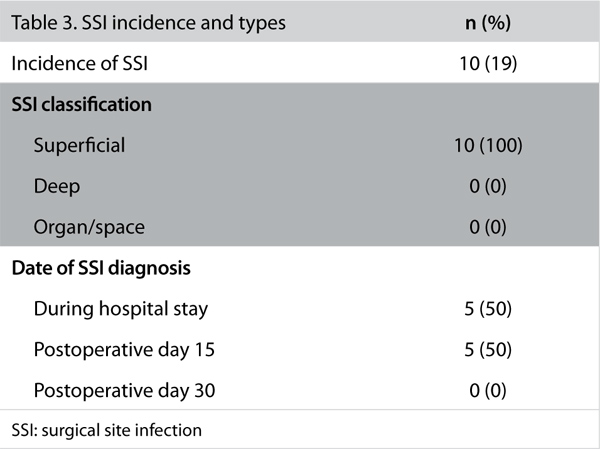 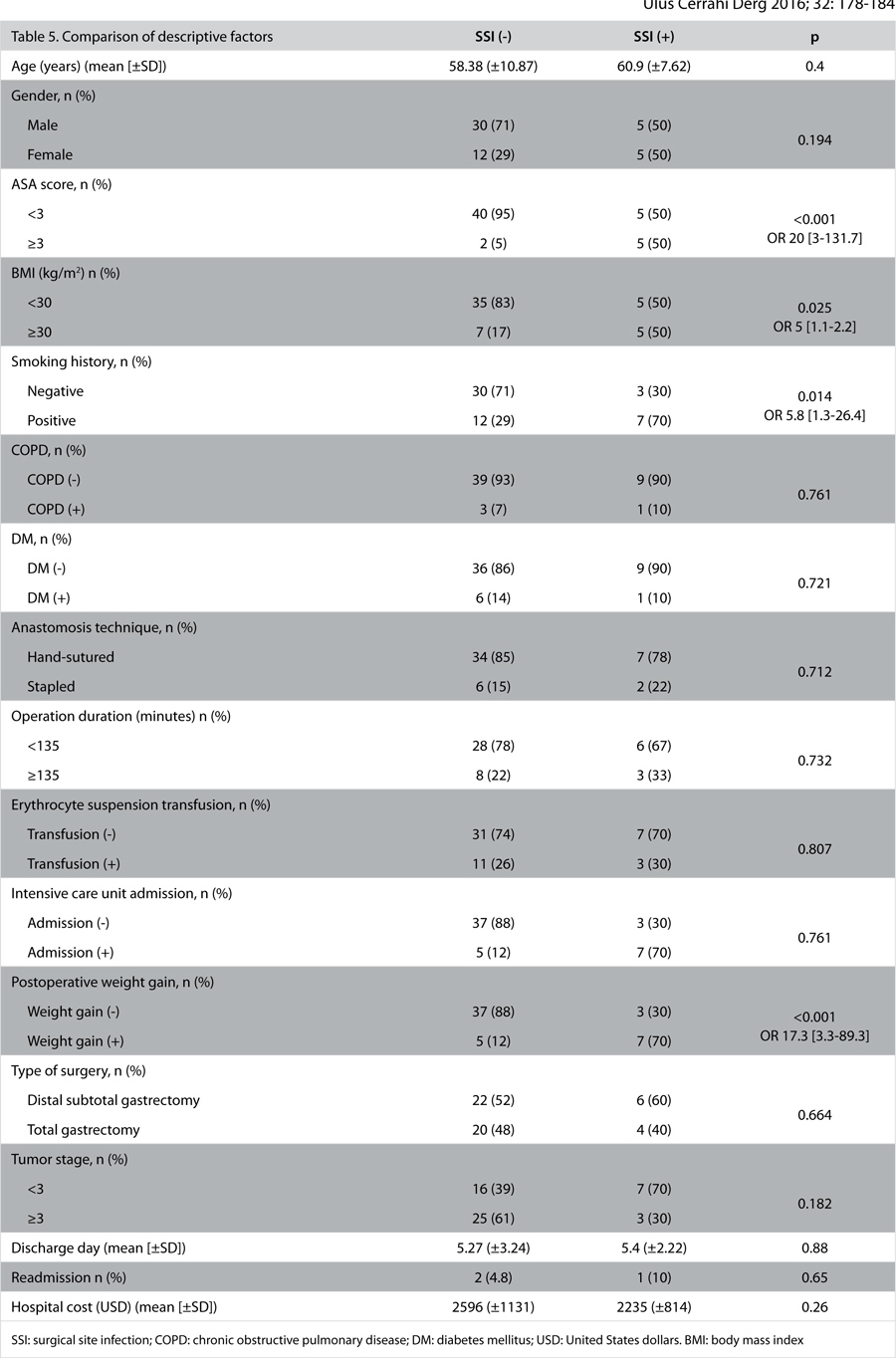 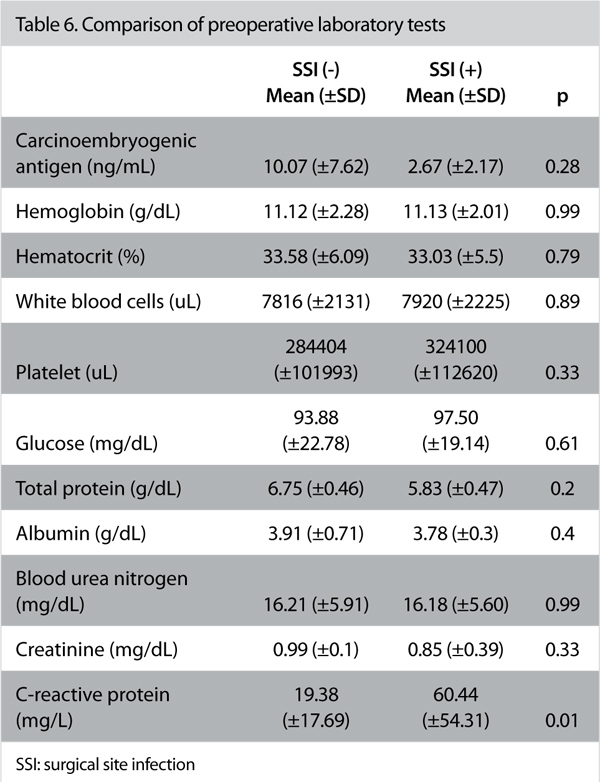 The incidence of gastric cancer is inclined to decrease in the past decades. Nevertheless, gastric cancer surgery is still frequently performed in tertiary care hospitals. According to various studies in the literature, SSI is one of the most common comorbidities after gastric surgery with an incidence of 3-28% (5, 13-15). Factors affecting SSI after colorectal surgery is thoroughly studied in the literature (11, 12), but data still needs to be accumulated for gastric surgery.

The incidence of SSI was 19% in our study. Although our rate was similar to the rates reported from other developing countries (5), it was above the rates reported from developed countries (13, 14). When we compared the SSI (+) and SSI (-) groups an ASA score of ≥3, a BMI of ≥30, postoperative weight gain during hospital stay, smoking history, and preoperative high CRP values were significantly more common in the SSI (+) group.

Patients who gained weight during the postoperative period were more commonly diagnosed with SSI in our study. The most common reason of weight gain during the early postoperative period is excessive IV fluid administration. Excessive IV fluid causes an increase in body weight and effects the mobility of the patient negatively. It also impairs tissue oxygenation by accumulating in the interstitial space and raises susceptibility to SSI (20, 21). We think that balancing IV fluid treatment meticulously and measuring patient weight on a daily basis will help decrease SSI incidence.

Impaired tissue oxygenation is also encountered among smoking individuals. It is well established that nicotine use delays primary wound healing and increases the risk of SSI by reducing the amount of oxygen carried to the wound by red blood cells (22, 23). Also in our study smoking history was significantly more common in the SSI (+) group. Stopping smoking at least 3 weeks before surgery will reduce susceptibility of the patient to SSI after gastric surgery.

When the ASA score was first generated, the goal was not to predict the SSI risk but anesthetic procedure related morbidity and mortality (22). Nevertheless, during the following years ASA score has become a predictor of underlying disease severity and susceptibility of the patient to SSI. In the literature, studies have been published reporting a correlation between ASA score and SSI (8, 24-26). In our study, ASA scores of 3 and 4 were found more commonly in the SSI (+) group. We think that ASA score is a reliable factor that aids the surgeon in defining the susceptibility of the patient to SSI.

In our study, subjects with a BMI over 30 were more prone to SSI. The correlation between BMI and SSI was reported in the literature repeatedly (14, 27, 28). The composition of adipose tissue is relatively avascular, and a wound with a higher amount of adipose tissue will have a lower tissue oxygenation. Similar to the mechanism which excessive IV fluid causes susceptibility to SSI, the less oxygenated adipose tissue is more prone to SSI. Also technical difficulties in obese patients and necessity of a wider incision all contribute to the SSI risk of the obese patient (29, 30). The interval between diagnosis and surgery is generally not long in gastric cancer patients, and the patient might not be able to lose a considerable amount of body weight. In our clinic, there is usually a 2-3 week interval between the time of diagnosis and surgery. Taking into consideration the fact that obese patients lose weight more rapidly, we think it is reasonable to advise the patient on the date of diagnosis to lose as much weight as possible before surgery under the supervision of a dietician.

In the SSI (+) group, patients had significantly higher preoperative serum CRP levels. As an acute-phase reactant CRP level can increase due to an underlying infection. It can also be elevated in numerous noninfectious inflammatory processes (31). Serum CRP value is a marker of chronic systemic inflammation and is positively associated with the amount of adipose tissue in a healthy individual. Obese individuals tend to have twice as high CRP levels as normal body weight individuals (32-34). We think that the reason of higher CRP levels in the SSI (+) group was because more patients with a BMI ≥30 were within this group. We don’t think that routine preoperative CRP level measurement will help decrease the SSI rate.

Although this study can be criticized with it’s small cohort size, according to our knowledge, postoperative weight gain was previously not reported as an SSI related factor after gastric surgery, and our study will make a contribution to the literature.

We assume that decreasing BMI to <30, stopping smoking at least 3 weeks before the operation, and preventing postoperative weight gain by avoiding excessive IV hydration will all help decrease SSI rate after gastric surgery.

Authors declared that the research was conducted according to the principles of the World Medical Association Declaration of Helsinki “Ethical Principles for Medical Research Involving Human Subjects”, (amended in October 2013).