Conclusion: According to our limited experience, sentinel lymph node biopsy under guidance of fluorescent indocyanine green that has advantage of simultaneous visualization is technically feasible.

Sentinel lymph node biopsy (SLNB) is an effective method of determining the need for axillary dissection in the surgical treatment of early stage breast cancer (1-4). The quality of life can be improved by preventing axillary lymph node dissection (ALND) related morbidity with SLNB (5). Radiocolloid and blue dye are the currently used methods for sentinel lymph node (SLN) detection. The two techniques have their own advantages and disadvantages. The radiocolloid method, which has a better SLN detection rate as compared to blue dye, requires collaboration with nuclear medicine and availability of a gamma probe as well as some measures for radiation exposure. Although blue dye does not have such issues, it may lead to skin discoloration, decrease in saturation, allergies, anaphylactic reactions, injection site nodules and fat necrosis (6-10). The SLN detection rates are lower in SLNB with blue dye alone as compared to radiocolloid use (11-13). Indocyanine green (ICG) is a non-toxic and non-ionized substance that not extravased by binfing to lipoproteins, has a short life-time has a fluorescence in near infrared (NIR) wavelengths, and enables tracing the lymphatic flow through the tissue with charged-couple device (CCD) (14).
This study aimed to evaluate the feasibility of fluorescent light displayed ICG guided SLNB, which was introduced as an alternative to the two current SLNB techniques.

Four patients who had been operated for early stage breast cancer with clinically (physical examination and radiology) negative axilla in Istanbul University, Cerrahpaşa Medical Faculty, Department of General Surgery, Breast Diseases Clinic between August 25th 2010 and September 14th 2010 were included in the study. There were no pathologic lymph nodes detected in the preoperative examination and imaging of patients.
Simultaneous radionuclide material was applied in two, and blue dye was applied in the remaining two patients.
An infrared imaging system (IC-VIEW, Pulsion Medical Systems AG, Munich, Germany) was used to visualize indocyanine green fluorescence. Following induction of general anesthesia and proper surgical field preparation, 2 cc of indocyanine green (ICG-Pulsion, Pulsion Medical Systems, Munich, Germany) was injected with subareolar or peritumoral injections, and subcutaneous lymphatics were traced by simultaneous imaging to detect the SLNs (Figure 1, 2). The axilla was accessed through an incision performed just below the axillary hairline in two patients with ICG fluorescence in the axilla, and through the lateral side of a Stewart incision in the other two (due to their not being suitable for breast-conserving surgery). In addition to the lymph nodes visualized by ICG, the blue dye stained lymph nodes and those showing radioactivity were also excised. The excised lymph nodes were confirmed by infrared imaging before being sent to histopathology (Figure 3). The excised SLNs were sent for intraoperative histopathologic examination. Axillary lymph node dissection was performed in two cases that had positive intraoperative results. 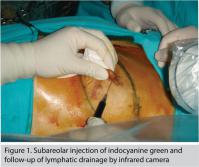 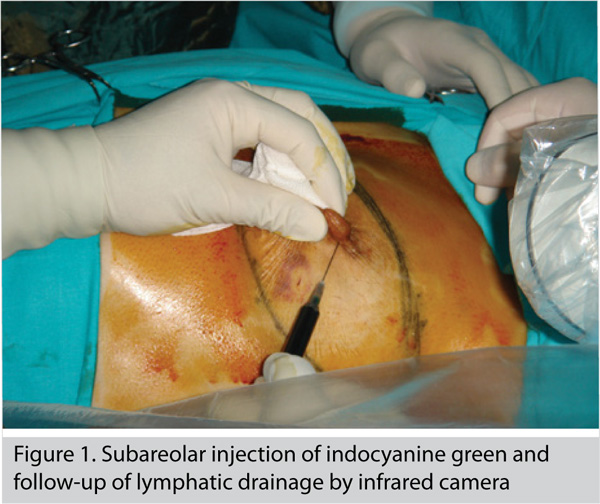 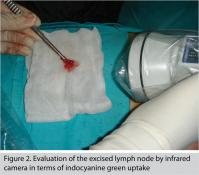 Figure 2. Evaluation of the excised lymph node by infrared camera in terms of indocyanine green uptake
× 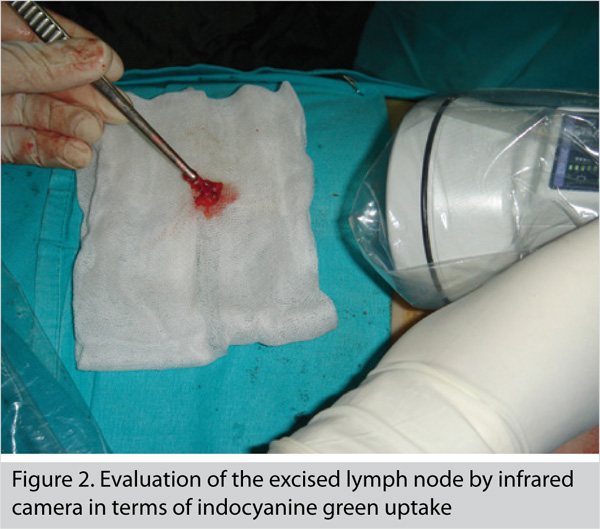 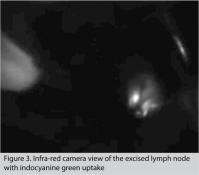 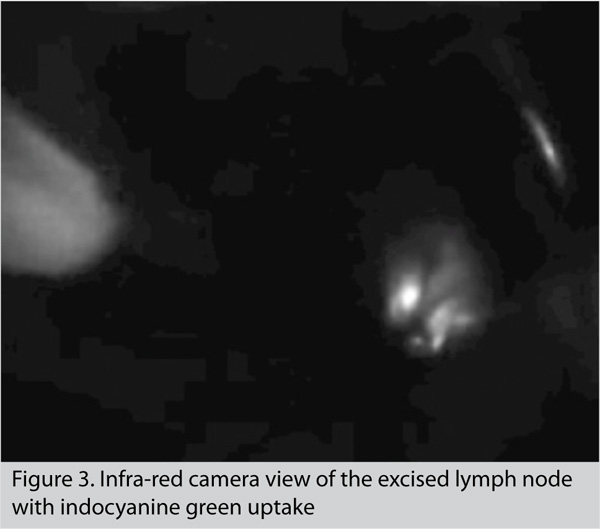 The median age of four patients included in the study was 67.50 (51-72) years. The median number of excised lymph nodes was 2.5 (2-3) for ICG, 0.5 (0-1) for blue dye, and 1.5 (1-2) for radiocolloid. All lymph nodes detected by radiocolloid has been identified by ICG while one of the lymph nodes stained with blue dye has not been detected by ICG. Patient information is presented in Table 1, and SLNB results are depicted in Table 2. Preoperative lymphoscintigraphy of patients who underwent SLNB with radioisotope revealed one focal uptake in the left axilla. Patients in whom visualization with ICG was sustained and who had a positive intraoperative frozen-section evaluation of the SLNB underwent ALND. In two patients who underwent to axillary dissection, metastasis was not detected in the nodes except the SLN (28 and 16 lymph nodes). The paraffin examination of the SLNs without evidence of metastases on intraoperative study, did not detect any additional metastases.

During the four-year median follow-up of patients, there were no loco/regional recurrences. None of the patients had allergic reactions, and no complications related to the method developed during or after surgery.

Giuliano et al. (15) have first defined SLNB in breast cancer. Sentinel lymph node biopsy is an independent prognostic factor for axillary lymph node staging in early stage breast cancer, and has become the standard of care (4, 16-19). Currently, blue dye and radiocolloid techniques are being used for SLNB. Using radiocolloid alone gives more accurate results than blue dye and its application by the surgeon is easy. Nevertheless, it is invisible it exposes the patients and health workers to radiation, although at a low amount and it requires collaboration with nuclear medicine unit (20, 21). Its use is mainly limited by the availability of a nuclear medicine unit in the hospital.
In the blue dye method, these disadvantages related to radiocolloid are not encountered, it is a method that can be visualized with bare eyes but requires the use of high-density blue dye. Adverse events such as skin discoloration, allergic reactions, fat necrosis and nodule formation in the injection site can be observed (6, 8). Nevertheless, any side effect related to either radiocolloid substance or blue dye (with the exception of skin discoloration) use was not observed in our study group.
In order to reduce the rate of false negative results in SLNB, methods that are more precise are required. To this end, recently, ICG that can be displayed simultaneously and has a good lymphatic drainage has been used for SLNB in breast cancer. Similar to this study, Murawa et al. (22) reported no toxic or allergic effects of ICG. Indocyanine green, that can be visualized simultaneously and has a good lymphatic drainage, can provide similar or even better results to the currently routine used radiocolloid and blue dye in combination (23). Sugie et al. (24) reported the SLN detection rate as 78% with use of blue dye as compared to the 99% with ICG use. In the same study, difference of the median number of SLNs detected by the two methods was as one more in the ICG method than blue dye method. Similarly, the number of SLNs detected by ICG in this study was higher than the blue dye method. Jung et al. (25) compared radiocolloid with combined methods (radiocolloid, blue dye and ICG) in terms of identifying SLN and yielded the number of SLNs was higher in the combined method (combined method: 3.4±1.37, radiocolloid: 2.3±1.04, p<0.001) similar to this study.
However, the requirement of a near infrared camera for the ICG method and its being detected up to a depth of 21 mm are its most important disadvantages (26). This disadvantage is particularly problematic in overweight patients. Kitai et al. (27) defined an axillary compression technique to address this issue where a cone-shaped transparent plastic device was compressed against the chest wall. The patients in this study have not encountered such a problem. Another disadvantage of ICG is that the surgical lights prevents visualization of ICG’s fluorescence and to prevent this use of low-spectrum light sources like laser or interference filters as excitation light source has been suggested (14). In this study, room lights in the operating room were turned off to prevent this problem and the SLNs were visualized transcutaneously by ICG fluorescence.
The limited number of cases constitutes a limitation to this study but still is acceptable for an initial experience.

According to the literature and our limited experience, ICG-guided SLN biopsy that has an advantage of simultaneous visualization is considered technically feasible. New studies on this method could yield promising results for the future.