Objective: Colorectal cancer is still the most common cause of cancer related deaths in the world despite the improvements in diagnosis and.treatment modalities as well as the prevalance of the community-based screening methods. Symptoms of colorectal cancer are non-specific and they are usually seen after the local progression of the tumour. In a number of patients with advanced stages of colorectal cancers, sympton of obstruction is observed without any detectable symptoms beforehand, and patients are are admitted to emergency departments with ileus. These conditions are indications of surgery, and mortality and morbidity rates can be quite high. In this study, by comparing the postoperative treatment results of colorectal cancer patients who underwent surgery under emergency or elective treatment, we aim to determine the factors associated with early diagnosis and survival.

Material and Methods: The records of the colorectal patients who treats between the 2009– 2013 were analyzed retrospectively. The groups data; on patient age, gender, operation, intraoperative results, hospitalization day, comorbid disease, postoperative complications and patological results were evaluated and compared each other.

Results: Between age, gender distribution, and the pathology results, there was no statistical difference between the groups (p> 0.05). The difference between; postoperative length of stay in hospital, comorbid diseases, pathological stage, postoperative complications was statistically significant in terms of both groups. (p <0.05). Longer duration of hospitalization, advanced stages of hospital admissions, surgical site infection, evisceration and anastomotic leakage complications were detected more in patients in the emergency surgery group.

Conclusion: Determining the risk for colorectal cancer patients can be diagnosed at an early stage and asymptomatic when it is necessary to incorporate into effective screening programs.This approach will be beneficial to the treatment outcomes, complication rates, the length of stay, survival and increase the treatment results.

Colorectal cancer (CRC) is one of the most frequent cancers with more than one million people worldwide being diagnosed with CRC annually, which is the most common gastrointestinal tract cancer (1). The majority of these neoplasms are endoluminal adenocarcinoma derived from the mucosa, and over 95% of CRC patients benefit from surgery or colonoscopic interventions for premalignant polyps with early diagnosis (2). Despite advances in diagnosis and treatment and dissemination of community-based screening, colorectal cancer remains to be one of the main reasons of cancer-related deaths in the world (3).
Colorectal cancer occurs in three ways; hereditary, sporadic or familial. The hereditary form is characterized by family history, being seen at a young age, presence of specific type of tumors and defects (4). Sporadic colorectal cancers often occur without family history and are generally detected in the elderly population (60-80 years). Neoplastic polyps of the colorectum such as tubular and villous adenomas are precursor lesions and 95% of CRC arise from these adenomatous polyps (4, 5).
The initial symptoms are not specific for colorectal cancer, and it usually manifests when the disease progresses locally. The main symptoms detected in the majority of symptomatic patients are change in bowel habit, hematochezia, rectal fullness and abdominal pain (6, 7). However, some advanced stage colorectal cancer patients are admitted to the emergency department with signs of obstruction without any detectable symptoms prior to these findings. This presentation creates a need for emergency surgery with quite high rates of mortality and morbidity, and nearly 20% of patients are diagnosed with acute colonic obstruction (8).
This study aimed to determine the factors associated with early diagnosis and survival in colorectal cancer patients by comparing age, sex, intraoperative findings, and surgical procedures performed according to tumor location, length of hospital stay, patient characteristics and postoperative treatment results among CRC patients who underwent either elective or emergent surgery.

After obtaining the necessary permission from the clinical research ethics committee of our hospital, records of patients treated for CRC at Dışkapı Ankara Training and Research Hospital General Surgery Department between January 2009 and August 2013 were retrospectively evaluated. The patients with missing data, and those with discrepancies between files, operation report, pathology and emergency department data were excluded from the study. Patients were divided into two groups as those undergoing elective or emergent surgery. Patients who were operated under emergency conditions, who were admitted to the emergency room due to complications of tumor and then having surgery were included.
Three hundred and twenty patients were included in the study, and they were compared with each other in terms of parameters such as age, gender, type of surgery, intraoperative findings, hospital length of stay, co-morbidities, postoperative complications and pathology results.
Statistical Analysis
The data were analyzed with “Statistical Package for the Social Sciences for Windows 17.0” (SPSS Inc., Chicago, IL, USA) statistical software package. Mann-Whitney U test was used for comparing the two groups. p values less than 0.05 were considered significant.

The demographic characteristics of the patients, co-morbidities, and hospital stay are summarized in Table 1. Indications for emergent operations were tumor perforation (9 patients), multiple intra-abdominal abscesses due to rectal cancer (one patient), sigmoid colon torsion due to a tumor (one patient), while the rest were operated for obstruction. Tumor location and type of surgery of the patients undergoing elective and emergency surgery are presented in Table 2. 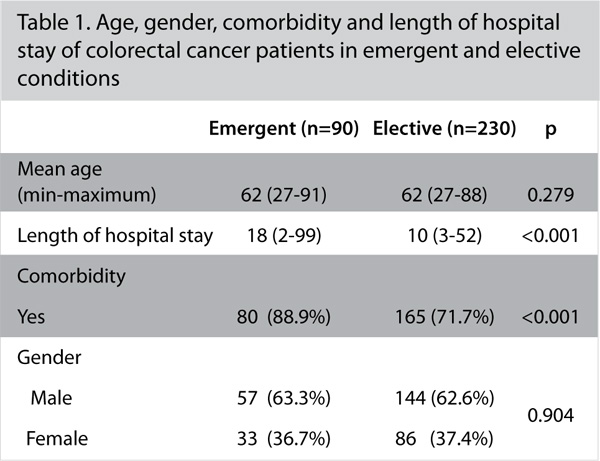 Table 2. Tumor location and type of surgery in colorectal cancer patients in emergent and elective conditions 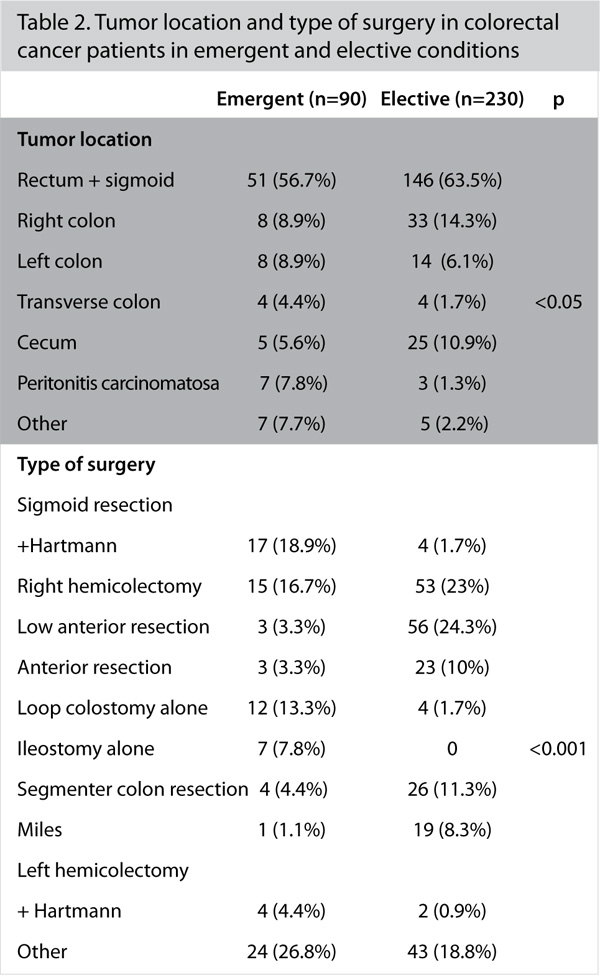 There was statistically significant difference between the two groups in terms of co-morbidities (Table 1). There was at least one co-morbid disease in 88.9% of patients undergoing emergent operation, and the most common co-morbid diseases were hypertension and diabetes in 19 patients (21.1%). In the group undergoing elective surgery, the most common co-morbid disease was hypertension in 37 patients (16.1).
The most common location of the CRC in patients undergoing elective and emergency surgery was the rectosigmoid (Table 2). Peritoneal carcinomatosis was statistically more frequent in emergent cases as compared to the elective surgery group (p<0.05). Synchronous tumors, anal canal tumors, recurrent and metastatic colorectal cancers constituted the other colorectal cancer group.
Right hemicolectomy, anterior resection, low anterior resection, segmental colon resection, and Miles operation were the most commonly performed surgeries in patients undergoing elective surgery, while sigmoid colon resection + Hartmann operation, loop colostomy alone and ileostomy were statistically more common in the group who underwent emergent surgery (p<0.001). Other operations included subtotal colectomy, by-pass operations for unresectable patients or patients with advanced stage disease, ileocecal resection, local excision, and debulking surgery.
Intraoperative findings are summarized in Table 3. Tumor perforation, adjacent organ invasion, liver metastasis, and peritonitis carcinomatosis were significantly more frequent in the group with emergency surgery as compared to elective surgery group. 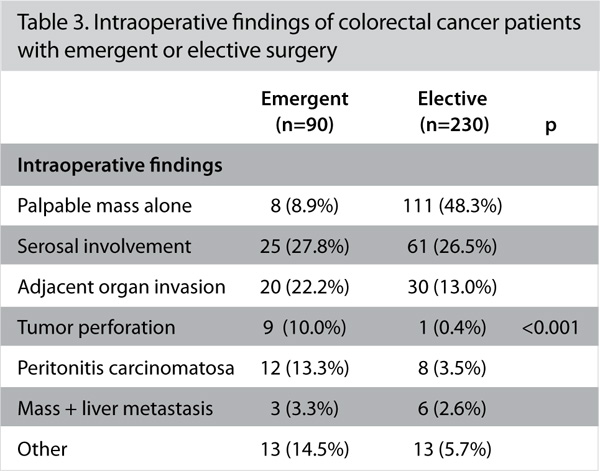 Table 4. Distribution of colorectal cancer patients with emergent and elective operation according to microscopic view and degree of differentiation 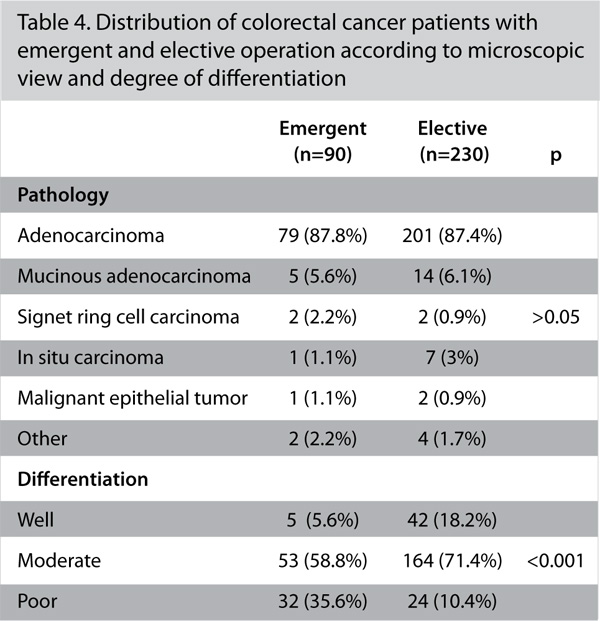 As outlined in Table 5, there was a statistically significant difference between the two groups in terms of TNM staging system. Stage 1, stage 2 and stage 3 disease were more common in elective patients, while patients with more advanced stages constituted the emergent group. The most common stage in elective cases was stage 2a with 46 patients (20%), while stage 4a disease was more common in emergent cases with 24 patients (26.7%). The majority of patients were found to be at an advanced stage on diagnosis irrespective of tumor location.

Table 5. Staging of colorectal cancer patients with emergent or elective surgery according to TNM classification system 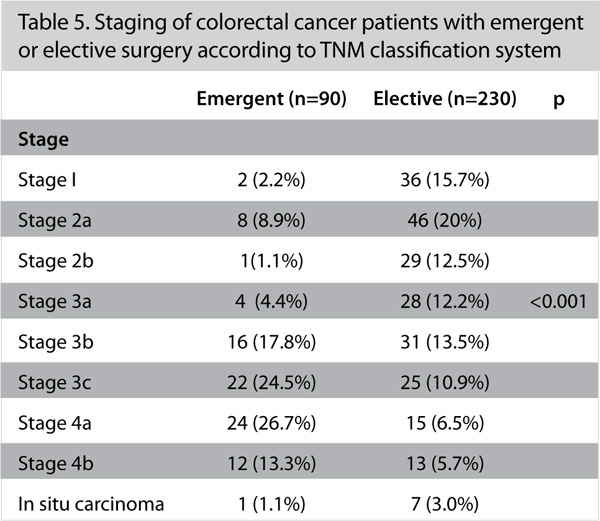 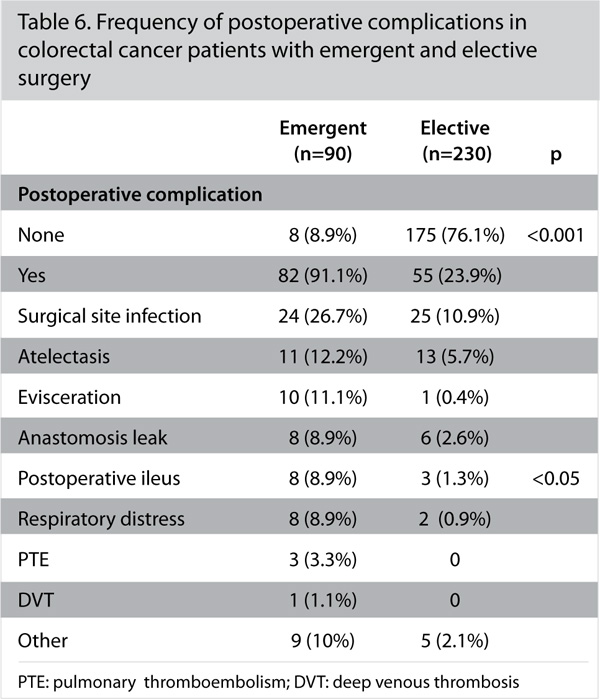 There was a statistically significant difference between the two groups in terms of length of hospital stay (p<0.001). The average length of stay for elective and emergency surgery was 10 and 18 days, respectively (Table 1). A patient who underwent emergency surgery died on the second postoperative day.

The role of the center where the study was carried out within emergency and trauma services resulted in high numbers of patients treated under emergency conditions. The increase in complications should be considered according to inclusion of more patients with emergent operations.
Colorectal cancer is of importance both because it is the third most common cancer among all cancers and because of the increase in its frequency. The biggest risk factor for sporadic CRC is age, and the disease is characterized by an increase in incidence with age. Being diagnosed at advanced stages adversely affects several parameters such as the type of surgery, period of hospitalization, complications, and patient survival.
Despite screening programs for colorectal cancer, emergency admissions and surgical procedures in emergency conditions remain high. Surgical operations for patients with impaired metabolic status due to mechanical obstruction do not only carry risks for patients but also yield inadequate results. In our study comparing the postoperative treatment results of patients with emergency and elective surgery for CRC, postoperative morbidities were more frequent in patients with emergency surgery.
It is observed that the disease remains asymptomatic for a long period and patients remain undiagnosed. The treatments performed under emergency conditions should be evaluated not only for the associated risks but also in terms of their effect on health related costs. Long hospital stay, cost related to the management of complications, and medical therapy should be considered.
From the clinician’s point of view, early diagnosis of patients by effectively adopting screening programs particularly to risk groups will positively affect treatment efficacy and survival results. Thus, we believe that the problems encountered during postoperative treatment will be decreased, and treatment costs will be reduced with shorter hospital length of stay.

Datas were collected retrospectively and informed consent cannot be collected.