Myxoglobulosis is a specific type of mucocele consisting of mucoid material. It is characterized by opaque, transparent globules that resemble “fish eggs” or “frogspawns”. It is generally diagnosed incidentally during an appendectomy or an autopsy. In this paper, we aim to present the case of a 58-year-old male patient who was referred to our hospital because of abdominal pain and loss of appetite. The patient underwent an appendectomy. Opaque intraluminal globules were found in the appendectomy material. The globules resembled pearls and they were 2–3 mm in diameter. After histopathological examinations, the patient was diagnosed with myxoglobulosis accompanied with acute appendicitis. According to our research, this is the first case of myxoglobulosis in our country.

Myxoglobulosis or caviar appendix is a special type of mucocele. It is characterized by the presence of opaque globules. Globules are made up of mucoid material and they form clusters that resemble “fish eggs” or “frogspawns.” The first case of myxoglobulosis was described by Latham in 1897, who found the condition in a postmortem examination, as reported in the manuscript of Probstein and Lassar (1). In 1914, the term “myxoglobulosis” was used by von Hansemann, who analyzed opaque globules varying in diameter from 0.1 to 1.0 cm (2), and it was described as a variant of mucocele. The etiology and pathogenesis of myxoglobulosis are still uncertain. Probstein and Lassar (1) have reported that the probable etiological factors are bacteria and necrotic epithelial debris, which may cause nidus formation for the deposition of mucin. Lubin and Berle (2) have reported that the core of the globules represent a mass of mucin by the granulation tissue that originated from the appendiceal wall and then these globules are disintegrated by mechanical contractions. Li et al. (3) have reported that the globules occur as a formation of mucin by the granulation tissue capsule and then these globules are extruded into the lumen by mechanical forces.

In this case report, we present an extremely rare case of appendiceal myxoglobulosis. According to our studies, this case is the first report of myxoglobulosis in our country.

The procedures of this case were performed in accordance with the Declaration of Helsinki. The patient was instructed and then informed consent was received. A 58-year-old male patient was referred to the Gediz State Hospital in July 2012 with complaints of nausea and abdominal pain in the right lower abdomen. His historical and anamnestic data were not unusual, but he had a history of smoking for 46 years and had been diagnosed with chronic obstructive pulmonary disease. Physical examination revealed that he had rebound tenderness. His blood cell count tests showed that the number of white blood cells had slightly increased. Based on these findings, the patient was diagnosed with acute appendicitis. After spinal anesthesia was performed, the patient underwent an appendectomy. During the operation, the appendix was enlarged and distended. Then, the appendix was removed and appendectomy material was sent to our pathology laboratory for histopathological examination.

Macroscopic examination results revealed that the appendectomy specimen was 7 cm in length and 1 cm in thickness. In the area that was cut, the appendiceal lumen was dilated and filled with numerous opaque, whitish pearl-like globules 2–3 mm in diameter (Figure 1). The accumulation of these globules resembled fish eggs (Figure 2). Biopsy samples were examined histopathologically. On microscopic examination of samples stained by hematoxylin and eosin (H&E), the globules which consisted of eosinophilic laminations of mucin surrounding an amorphous granular core were observed. The diffusion of inflammatory infiltration consisting of polymorphonuclear leucocytes and mononuclear cells were observed in the entire layer of the appendiceal wall. Furthermore, hemorrhage was evidently observed in the wall. Globules were positively stained with Alcian Blue (Figure 3, 4). Considering all these histopathological findings, our case was diagnosed as myxoglobulosis accompanied with acute appendicitis. 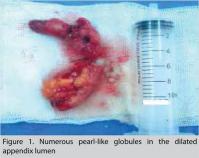 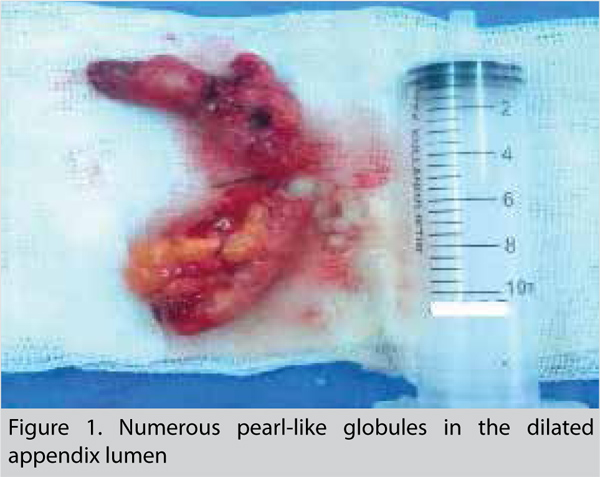 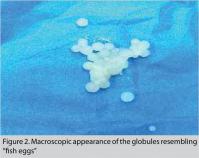 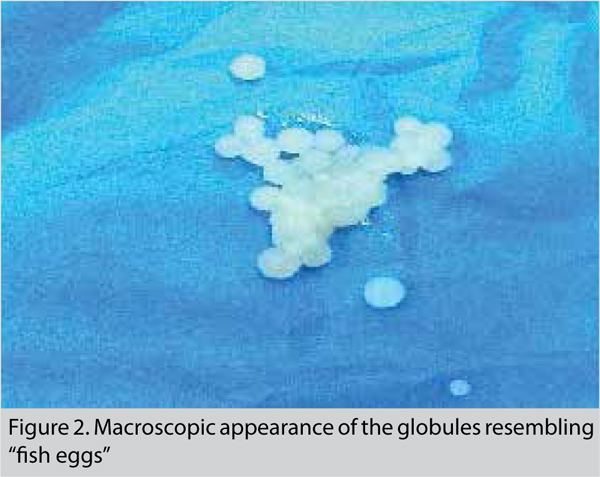 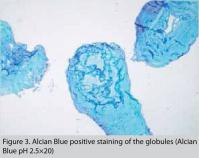 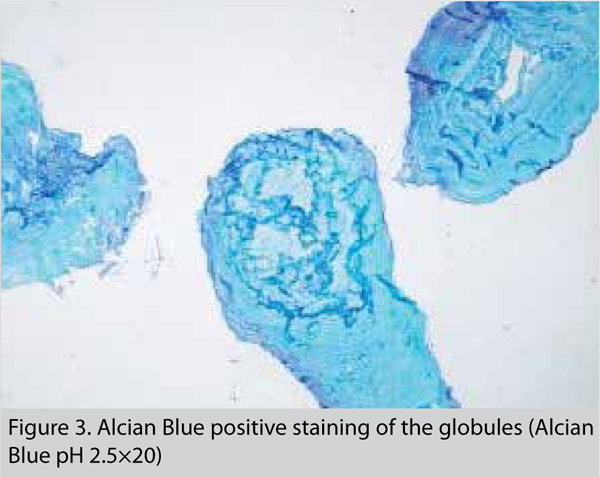 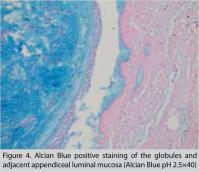 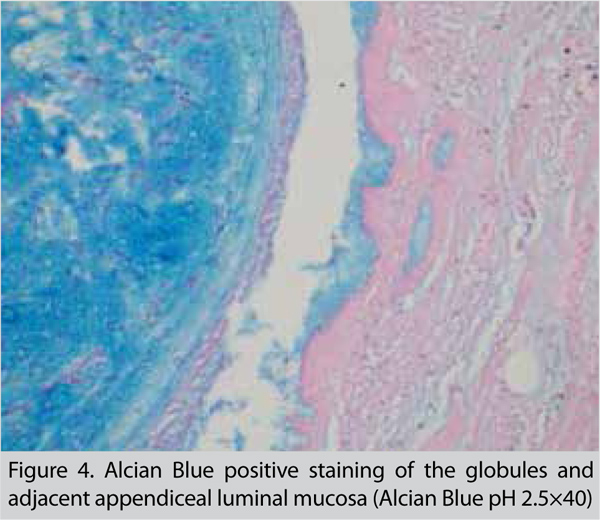 In this paper, we have reported a rare case of myxoglobulosis, which was incidentally found in a patient with peritonitis due to acute appendicitis.