Risk factors for the development of complicated appendicitis in adults

Objective: To investigate the patient’s history and physical examination information to find out risk factors associated with complicated appendicitis.

Material and Methods: Two hundred patients who were admitted with complicated appendicitis (including abscess, phlegmon, and generalized peritonitis) were retrieved from our database. Two hundred patients with non-complicated acute appendicitis were randomly selected from the same period. These two groups were compared in terms of demographic characteristics, past medical history, and presenting symptoms. We made a multivariate analysis model using binary logistic regression and backward stepwise elimination.

Results: Based on multivariate analysis, risk factors for complicated appendicitis included presenting with epigastric pain (OR=3.44), diarrhea (OR=23.4) or malaise (OR=49.7), history of RLQ pain within the past 6 months (OR=4.93), older age (OR=1.04), being married (OR=2.52), lack of anorexia (OR=4.63) and longer interval between onset of symptoms and admission (OR=1.46). Conversely, higher (academic) education was associated with decreased odds for complicated appendicitis (OR=0.26).

Conclusion: Our findings suggest that a surgeon’s clinical assessment is more reliable to make a judgment. “Bedside evaluation” is a useful, cheap, quick and readily available method for identifying those at risk for developing complicated acute appendicitis.

Acute appendicitis and the subsequent appendectomy are the most familiar surgical phenomena for the general population and is considered a common surgical procedure (1).

Several studies have tried to evaluate complicated appendicitis, its contributing factors, patients at risk, and its impact on healthcare resource utilization (1, 2, 10-15). Some of the proposed associations with this condition are diabetes mellitus (1, 2), duration of symptoms prior to surgery (16-18), extremes of age (11-13, 15, 17, 19), various laboratory markers (20-22) or other novel parameters, such as “intra-abdominal pressure” (23), types of medical insurance (19), imaging findings (24) and the underlying pathology of inflamed appendix (25).

This study compared two groups of patients with complicated and non-complicated appendicitis in a sample of patients admitted to a referral academic hospital. It aimed to find any possible associated factor with complicated appendicitis. We sought to investigate the relevance of the common bits of information in the patient’s history and physical examination to the outcome of acute appendicitis, which are gathered upon admission to the emergency department but are frequently neglected or downplayed against findings of sophisticated imaging methods.

Study Design
We designed a case-control study in order to compare various perceived risk factors among patients with complicated or non-complicated acute appendicitis. We sought to determine odds ratios for risk factors of developing complicated acute appendicitis. The institutional review board approved the study design and protocol. In addition, the ethics committee of our hospital approved the conduction of the study.

During this period the attending physicians remained the same, resident and staff activities did not undergo any major changes, medical protocols and surgical procedures remained comparatively consistent.

The demographic information, medical history (including sign and symptoms, duration of symptoms before hospital admission, and previous medical treatment at outside centers), past medical history, physical examination findings, laboratory data, position of the appendix (based on surgical or imaging findings), and total length of hospital stay were collected for each patient.

Definitions
Complicated acute appendicitis was defined as the presence of either generalized peritonitis due to perforated appendicitis (based on surgical findings), or appendicular abscess or phlegmon (based on abdominopelvic CT scan). Gangrenous appendicitis without perforation was classified as a non-complicated type.

Statistical Analysis
Chi-square and independent sample t tests were used to compare categorical and continuous variables as indicated. Through the paper, p values <0.05 were considered as significant. Binary logistic regression with backward step-wise elimination was used to determine risk factors and corresponding odds ratios. Factors with p values <0.05 in the univariate analysis were entered in the multivariate model. Due to the co-linearity among some variables, some of them were aggregated as combined variables.

The majority of our patients were males (73.2%), with an age distribution of 30.43±13.07 years. Patients with complicated appendicitis were significantly older, with higher income, lower level of education in themselves or in their family members, and more likely to be married. However, there was no significant difference in gender, body mass index (BMI), and insurance status (Table 1). 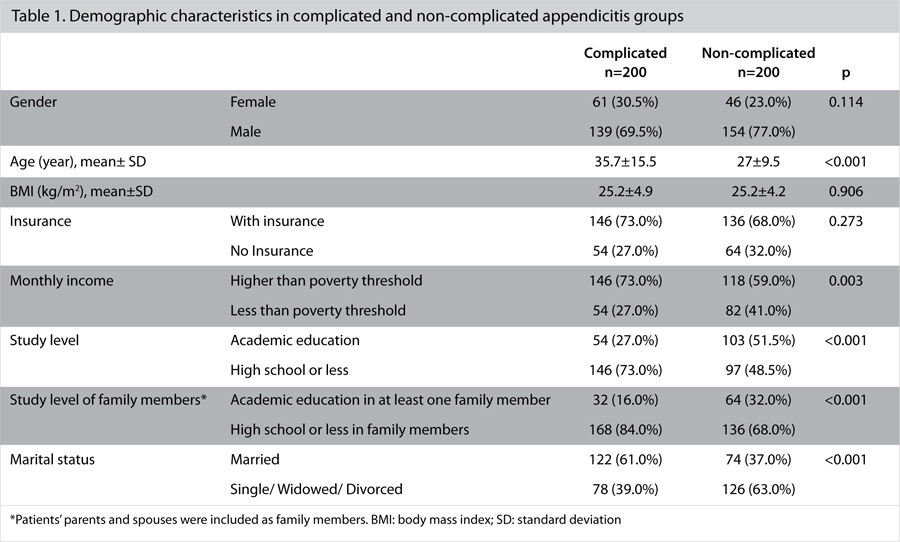 There were significant differences in the prevalence of diarrhea, epigastric pain, dysuria, urinary frequency, malaise and anorexia between patients with complicated and non-complicated acute appendicitis in univariate analysis (p<0.05). Proportionally, more patients in the complicated group had a history of hypertension, diabetes mellitus, coronary artery disease and history of right lower quadrant (RLQ) pain during the past 6 months (p<0.001). Regarding physical examination findings, abdominal guarding and RLQ mass were more prevalent among those with complicated acute appendicitis (p<0.01) (Table 2).

Of the 200 patients with complicated acute appendicitis, 103 had perforated appendicitis with peritonitis, 32 had developed abscesses and 65 had phlegmon. Our findings suggested that the proportions of different appendix positions did not vary between the two group members. Peritonitis constituted the majority of complication assessments during surgery. There were significant differences in terms of interval between the onset of symptoms and hospital admission, presence of fecalith, and length of hospital stay (p<0.001) (Table 3).

Analysis of the regression model suggested that patients with appendicitis who were married or had epigastric pain, diarrhea, malaise, lack of anorexia or a history of RLQ pain within the past 6 months had an increased odds of having complicated acute appendicitis. For each year of increase in a patient’s age, the odds of having complicated acute appendicitis increased by 4%; for one day increase in the interval between onset of symptoms and admission, the odds of complication was increased by 45%. Patients with higher education had reduced odds of belonging to the complicated group (Table 4). 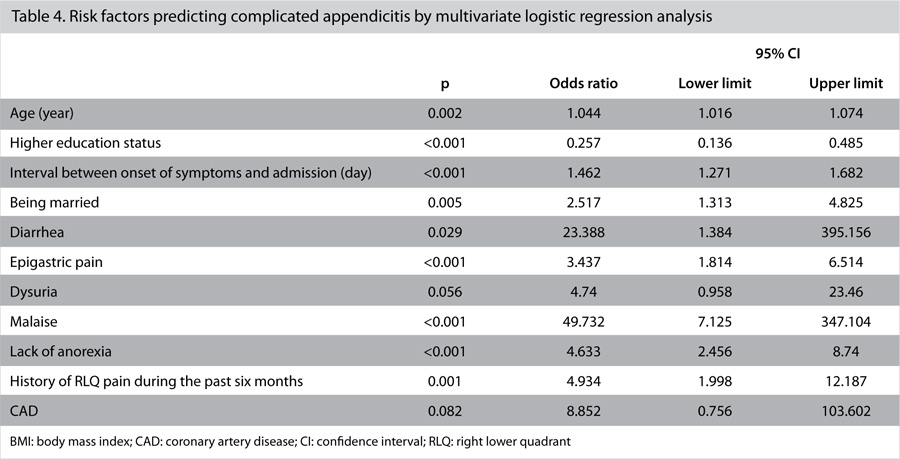 Acute appendicitis is a common entity with a relatively high rate of misdiagnosis (12-30%) (26, 27). Nevertheless, various studies on risk factors for complicated appendicitis suggested that health care providers all over the world desire to be able to predict cases with less favorable outcomes and to be prepared for such circumstances. Serum WBC counts have been used for the diagnosis of acute appendicitis (28), and several studies explored the application of laboratory values in differentiating complicated acute appendicitis (20-22, 29). Other studies used imaging modalities to identify complicated cases (24), nonetheless it has been rightly argued (30) that both financial aspects of a modality and its subsequent effect on one’s clinical judgment should be taken into consideration in such studies. In this regard, we focused on information that could be gathered both easily and quickly by a health care professional. To the extent of our knowledge, no other published study has evaluated demographic properties and “bedside evaluation” in complicated acute appendicitis in adult patients in this manner.

The age dispersion of our patients was similar to other studies (1, 20, 22, 31). Females constituted a minority of our sample group; one explanation might be that women with acute abdomen are usually directed to other medical facilities by emergency medical services, given the obstetric and gynecological pathologies leading to abdominal pain in women. Nonetheless, women were evenly distributed among two groups.
The socioeconomic status of populations have received attention in health studies, both in the past and present (32-34), where education, income and occupation have been considered as components of this parameter (34). Our findings and comparisons among income and education levels, and intervals between onset of symptoms and hospital admission suggested that those with complicated acute appendicitis had lower education levels, and that they sought professional help after a longer interval probably because they favored self-treatment. Studies on adult populations have emphasized lower socio-economic status of patients (1, 2, 20, 22, 31) as compared to those focusing on pediatric populations (18, 19); still, we found that those with lower education were at increased odds of having complications, which was in contrast to findings of another study regarding education of patients’ parents (18). On the other hand, unlike another study (19), we did not find any differences between insurance status and outcome in our patients; this difference could be explained by different policies of insurance companies regarding surgical operations.

Compared to studies which emphasized more on physical examination findings and on history taking, the association between interval between onset of symptoms and admission were compatible with the findings of those studies (15-17). In contrast to other studies (1, 2, 17, 25), our findings failed to suggest any associations between types of pre-existing medical conditions and outcome of acute appendicitis; these inconsistencies could be partly explained by different prevalence of medical conditions in samples (1), different age distribution between studies (1), or different methodologies (2). In addition, the different age spectrum and focusing of some of these studies on pediatric population should be kept in mind while interpreting these results (17, 19).

Although all studies in this field relied partly upon clinical assessment of patients, we perceived that assessing a large number of physical examination findings and demographic information provided the present study a touch of novelty. The majority of variables in our model are those that could be obtained through organized and brief history taking and physical examination, and did not require special skills or expensive techniques or procedures. Application of some of these findings to practice needs further expansion of this study; still, our findings suggest that a surgeon’s clinical assessment is more reliable in making a judgment. “Bedside evaluation” is a useful, cheap, quick and readily available method for identifying those at risk for developing complicated acute appendicitis. The interval between onset of symptoms and admission was a modifiable risk factor based on our findings. Raising public awareness on this issue could be a proper next step. Also, we propose that in patients who present with RLQ pain and have a number of risk factors suggested by this study (e.g. higher age with atypical symptoms like malaise, diarrhea, dysuria, epigastric pain, and lack of anorexia), acute appendicitis should be considered in even less likely clinical settings, since the risk of misdiagnosis and subsequent complications can be higher.

Our sample size was relatively large and we used variables that seemed to be important but were not reported in other studies; still, including so many variables in the regression model necessitates even a larger sample size. Further studies to show the reproducibility of our findings are warranted. Presenting the findings of similar studies in this field in a systematic review could be another useful step.

Complicated appendicitis may occur more in patients with atypical symptoms (epigastric pain, diarrhea, malaise, lack of anorexia, and history of chronic RLQ pain), those who are older, married, without higher education or with a longer interval from the onset of symptoms to admission. Patients with these factors and suspicion for appendicitis should be evaluated, advised and followed-up in a vigorous way not to be overlooked. Furthermore, “bedside evaluation” is a useful, cheap, quick and readily available method for identifying those at risk for developing complicated acute appendicitis.

The ethics committee of the Shariati Hospital, Tehran University of Medical Science approved the study.