Gastrointestinal stromal tumors (GIST) are recently identified, rare mesenchymal tumors of the gastrointestinal tract. Significant molecular changes that lead to GIST development have been defined over the last two decades (1, 2). With the introduction of tyrosine kinase inhibitor imatinib mesylate in clinic use, survival rates have significantly increased in even metastatic and high risk GIST (3-5). In a randomized phase III trial by Blank et al. (6), it was reported that more than 80% of GIST patients benefit from the tyrosine kinase inhibitor and that median survival in metastatic GIST was approximately 5 years (6). According to the criteria by the National Institute of Health (NIH) and the Armed Forces Institute of Pathology (AFIP), tumor size and mitotic activity are the most reliable and most widely used prognostic criteria in GISTs.

In recent years, the importance of cancer-related inflammation in determining survival and disease progression is becoming apparent for various cancer types (7, 8). Especially the patient’s systemic inflammation status independently determines prognosis. However, the reason for this remains unclear. Systemic inflammatory response is particularly associated with changes in white blood cell count in peripheral blood, and particularly with neutrophilia along with relative lymphocytopenia (9). Based on these results, neutrophil-lymphocyte ratio (NLR) has been shown to be associated with poor prognosis in various types of cancer (10, 11). NLR is a feasible, reproducible and inexpensive indicator that can be used to detect systemic inflammation (12). Previous studies have reported a correlation between high neutrophil counts in peripheral blood and response to treatment and poor prognosis in patients receiving imatinib therapy due to unresectable GISTs (13, 14).

In this study, our aim was to investigate the correlation between preoperative peripheral blood NLR in primary GIST patients and prognosis.

Patients
An ethical board approval was obtained from Necmettin Erbakan University Clinical Research Ethics Committee, No. 2012-69. Files of 78 patients who underwent surgery at Necmettin Erbakan University Meram Medical Faculty General Surgery Clinics between January 2006 and June 2012 and had a pathological diagnosis of GIST were retrospectively evaluated. Data on preoperative routine peripheral complete blood count, biochemistry parameters, coagulation measurements and pathology results were reviewed retrospectively. Patients who were operated on for emergent reasons were excluded from the study. The correlation between patients’ age, gender, type of surgery performed, pathology, immunohistochemistry features, follow-up period and NLR were assessed.

Peripheral Blood Measurements
Last peripheral blood count measured before surgery was accepted as the preoperative value. It was ensured that the patient did not have any other reasons that may cause leukocytosis. Blood NLR values were obtained by dividing blood neutrophil count (neutrophil count/µL) to lymphocyte count (lymphocyte count/µL). Correlation between NLR and prognosis of patients was analyzed.

Statistical Analysis
Statistical Package for the Social Sciences 16.0 (SPSS Inc., Chicago, IL, USA) was used for statistical analysis. Binary correlations were assessed by Pearson correlation analysis. The comparison of the difference between groups was evaluated by ANOVA Welch test. Data were expressed by hazard ratio and 95% confidence intervals. P<0.05 was considered to be statistically significant.

Demographic Data
Forty-one patients were female and 37 male, with a mean age of 68.8 (31-83). There were 35 gastric, 20 small intestine, 11 retroperitoneal, 5 colon, 2 rectum, 2 esophagus, and one duodenum, one appendix and one adrenal tumors (Table 1). 69 patients underwent curative surgery while 9 were considered as inoperable during surgery. In the patients with inoperable tumors, the organ involved were the stomach, small bowel and retroperitoneum, with 3 patients in each site. The criteria for inoperability were accepted as multiple liver metastases and peritoneal carcinomatosis. These patients were treated with chemotherapy.

Table 1. Distribution of patients according to organ and type of surgery 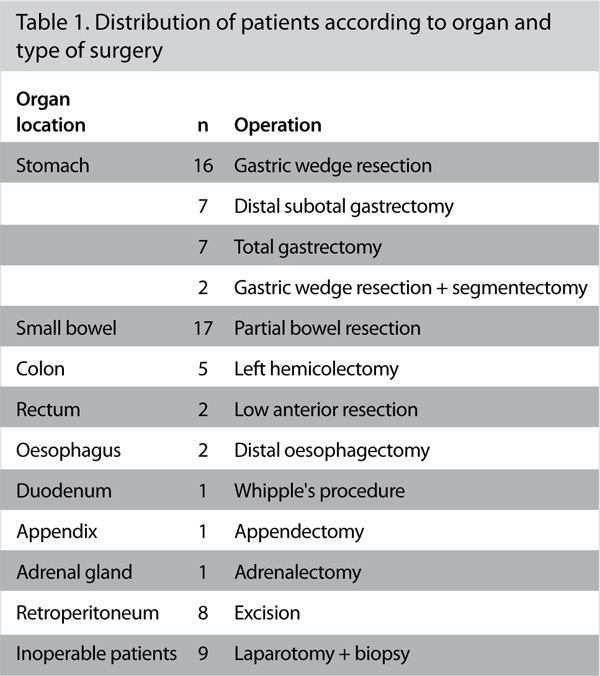 When mitosis count of the tumors were analyzed in 50 high power fields, the mitotic activity was found to be ≤5 in 33, 6-10 in 18, and ≥10 in 27 patients. According to this data, there were 7 cases in the very low risk group, 11 in the low risk group, 18 in the moderate risk group and 42 in the high-risk group.
The mean follow-up period was 40 months (6-120 months). Recurrence was observed in eight patients. Six of these patients were re-operated. Cure was achieved in four of these patients, while two patients were considered inoperable and received chemotherapy. Two patients with recurrence received chemotherapy without surgery due to metastatic disease. Fourteen patients could not be reached after a mean follow-up of 1 year.

Prognostic Criteria and NLR
The median NLR was 3.5 (0.9 to 32.5). The evaluation of NLR according to pathologic risk groups showed that NLR level was significantly increased parallel to an increase in risk group (p <0.02). According to Pearson correlation analysis, the NLR increase and decrease in the follow-up period was statistically significant (r=-0.32, p=0.009, Figure 1). Similarly, there was a significant correlation between increased mitotic activity and NLR increase (r=-0.364, p=0.025, Figure 1b). On the other hand, there was no correlation between NLR increase and tumor diameter and recurrence (p=0.189, r=0.202).

Gastrointestinal stromal tumors are rare mesenchymal neoplasms of the gastrointestinal tract. The recent implementation of targeted therapies based on advances in both biology and pathogenesis of GISTs has provided dramatic results. At present, there is no staging system for GIST. Pathologists believe that tumor size and mitotic index are the most reliable indicators of malignancy. Currently, the NIH tumor size and tumor risk category are used as independent prognostic criteria.

Since gastrointestinal stromal tumors are resistant to radiation therapy or chemotherapy, there was no effective treatment for metastatic disease or for tumors that could not be surgically removed until the discovery of tyrosine kinase inhibitors (15). Currently, the first choice treatment of recurrent or metastatic GIST is targeted therapy (imatinib). With this treatment, half of the patients respond to treatment, and disease progression stops in at least 75-85% (16). Multiple tyrosine kinase inhibitor sunitinib is used in patients with imatinib resistance (17). Our patients high-risk patients according to AFIP criteria with inoperable disease were treated with targeted therapy. Six patients with an unresectable lesion showed partial remission with imatinib 400 mg / day treatment for 12 months. Curative surgery was performed in the re-operation after down staging. The treatment of three patients is still on-going.

The role of immune response in the natural history of gastrointestinal stromal tumors is becoming increasingly evident. Inflammation refers to the presence of immune cells in the tumor, which is clinically associated with poor prognosis. Indeed, Balachandran et al. (14) has shown that intratumoral T-cell response is induced in GISTs. However, the CD4 / CD8 ratio is relatively deteriorated, and tumor cells are suppressed by indoleamine 2,3-dioxygenase, which is an immunosuppressive enzyme. The lack of general immune response due to impairment of T cell function may decrease tumor-specific response. This mechanism is important in imatinib sensitivity. Another mechanism is stimulation of tumor cell growth and angiogenesis by inflammatory cells, and induction of metastasis through mediators they secrete (18).

Preoperative prediction of prognosis in gastrointestinal stromal tumors is not only important in providing data on postoperative survival for clinicians but also in determining adjuvant treatment. Today, adjuvant imatinib therapy is given to high-risk patients according to the NIH criteria. Patients with three selected risk factors; tumor size, tumor location, and high mitotic index have high recurrence rates and benefit greatly from adjuvant therapy (19). However, these criteria can be only determined by postoperative pathology evaluation. Parameters that may inform clinicians on tumor characteristics preoperatively on non-metastatic GIST are limited. In particular, we can only make estimation on tumor characteristics preoperatively based on tumor size according to the AFIP and the NIH criteria. We aimed to identify a new criterion that is both efficient and easily applicable in determining the character of GIST tumors preoperatively. We considered that in this way the surgeon will be informed on tumor characteristics before the operation and may help in determining the patient’s treatment plan.

NLR is one of the hematological markers of systemic inflammatory response, and is being used as a reliable method both as an indicator of inflammation and in determining survival in several types of cancer. Öztürk et al. (20) have reported that NLR significantly increased in young patients with acute coronary syndrome. Kapçı et al. (21) and Kahramanca et al. (22) emphasized the importance of NLR increase in the diagnosis of acute appendicitis. The prognostic significance of NLR in various types of cancer has been investigated in numerous studies (Table 2) (23-31). Presence of systemic inflammation reaction is used as a prognostic marker for various types of cancer (27, 30). In our study, we determined that preoperative NLR is a strong predictor of both mitotic activity and pathologic tumor risk for GIST. In addition, we identified that enhanced NLR is associated with poor prognosis. This finding indicates that the NLR value, which is an applicable and cheap preoperative method, can be used as an independent predictor of prognosis in GIST.

Table 2. Evaluation of correlation between NLR and recurrence and survival after curative surgery in various cancer types

Preoperative NLR may be used as a feasible, inexpensive and reliable prognostic factor that both provides information on the tumor risk and helps determine prognosis in gastrointestinal stromal tumors.

Patient consent form was not obtained from patients since this study is a database search.