Tumor perforation is accepted as an important prognostic factor along with tumor size and mitotic index in gastrointestinal stromal tumors (GIST). The prognosis is worse in patients with tumor perforation or rupture. A few case reports of small bowel GIST presenting with rupture have been published in the medical literature. We report an unusual case of a 7.5 cm GIST of the jejunum that presented with spontaneous rupture. A previously healthy 46-year-old male patient presented with sudden abdominal pain. Physical examination revealed overt peritonitis, and computed tomography showed a heterogeneous solid mass measuring approximately 6 cm x 5.5 cm arising from the jejunum and massive fluid in the peritoneum. The mass was diagnosed as a GIST originating from the gastrointestinal tract. Emergency laparotomy was performed and intraoperative findings showed massive hemoperitoneum and an outgrowing mass at the jejunum, 50 cm distal to the Treitz ligament. The tumor had ruptured near the wall of the small intestine and it was actively bleeding. Surgical resection of the tumor was performed and the patient was discharged home uneventfully on the third postoperative day. The immunohistochemical characteristics of the tumor revealed it to be a GIST.

Gastrointestinal stromal tumors (GISTs) are the most common mesenchymal tumor of the gastrointestinal (GI) tract (1). Most GISTs are >5 cm in diameter at the time of diagnosis, with a diameter of 10 cm being associated with a higher risk of local or distant metastasis. In addition to the tumor size, mitotic rate, and tumor location, tumor rupture is believed to be a prognostic factor for the outcome of patients with a GIST (2, 3). The clinical symptoms of a GIST range from mild to severe, and complications include vague abdominal pain, hematemesis, and intestinal obstruction. However, overt peritonitis caused by GIST rupture is very uncommon (4). This paper describes the clinical course of acute abdomen caused by a rare case of a ruptured exophytic small bowel GIST.

A 46-year-old man with no history of abdominal trauma was admitted to the emergency department (ED) for vague abdominal pain. He had no previous history of any surgery or any chronic disease. He denied any previous medication, nausea, vomiting, changes in bowel habit, hematemesis, melena, or weight loss. His medical and family histories were unremarkable. His body temperature was 36.5°C. His blood pressure was 140/70 mm-Hg and pulse rate was 87 beats/min. Auscultation indicated clear lungs, and cardiac examination demonstrated no murmurs, rubs, gallops, or crunch. Physical examination revealed that the abdomen was distended, with diffuse tenderness and without rebound tenderness. Blood analysis revealed a white blood cell count of 14200/μL, initial hemoglobin level of 9.8 g/dL and platelet count of 151000/μL. The laboratory tests for blood glucose, electrolytes, urea, creatinine, and amylase were normal, as were the liver function tests.

Computed tomography (CT) scan revealed free fluid in cul-de-sac and perihepatic fluid. The patient was admitted to general surgery in-patient clinic with a prediagnosis of perforation. An abdominal enhanced CT scan revealed the presence of a heterogeneous solid mass measuring approximately 6 cm x 5.5 cm attached to the jejunum and massive fluid in the peritoneal cavity (Figure 1). The mass was radiologically suspected as a GIST arising from the jejunum and the fluid in the peritoneum indicated tumor rupture. We suspected the patient’s condition to be peritonitis induced by organ rupture and decided to perform emergency laparotomy under general anesthesia. A subsequent surgery involving wedge excision removed a large ruptured jejunal tumor, which was an outgrowing mass located 50 cm distal of Treitz ligament and measuring approximately 6 x 6 x 8 cm (Figure 2). The tumor had ruptured near the wall of the small intestine and active bleeding was observed. A total of 1000 mL of blood with blood clots was evacuated from the abdominal cavity. Hematoxylene eosin staining showed spindle-shaped cell proliferation (Figure 3), and immunohistochemical reports indicated that the tumor was strongly and diffusely positive for CD117 (Figure 4), DOG1 and bcl-2, partially positive for F8 and totally negative for the S-100 protein, smooth muscle actin, and CD34. Nuclear expression of the proliferation-associated Ki-67 antigen was seen in approximately 10% of the tumor cells. These findings supported the diagnosis of a GIST. The patient recovered well without postoperative complications and was discharged on the third postoperative day. A GIST (high-risk group) of the jejunum was diagnosed and treated with imatinib mesylate, 400 mg daily, after the 25th postoperative day. The patient signed a written informed consent form granting his permission for publication of his details in this case report. 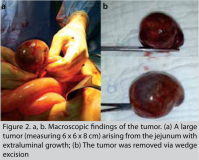 Figure 2. a, b. Macroscopic findings of the tumor. (a) A large tumor (measuring 6 x 6 x 8 cm) arising from the jejunum with extraluminal growth; (b) The tumor was removed via wedge excision
× 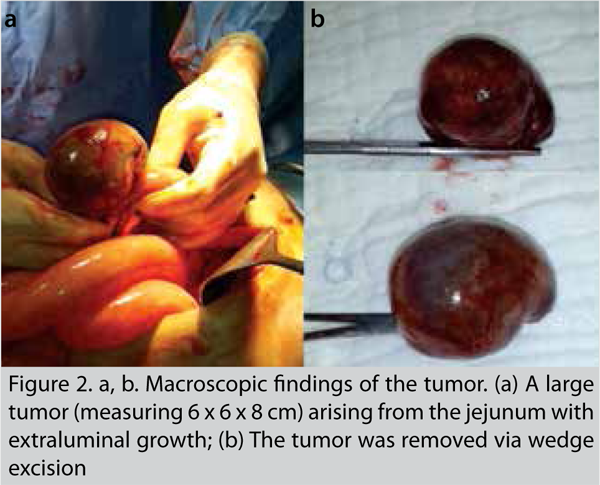 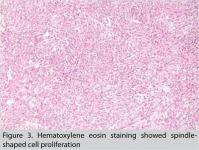 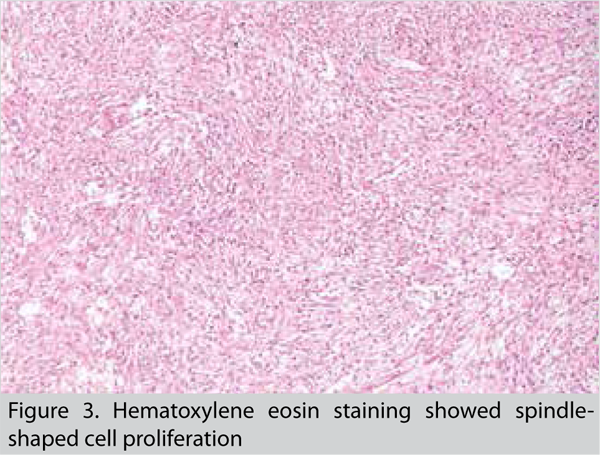 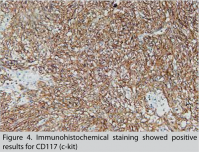 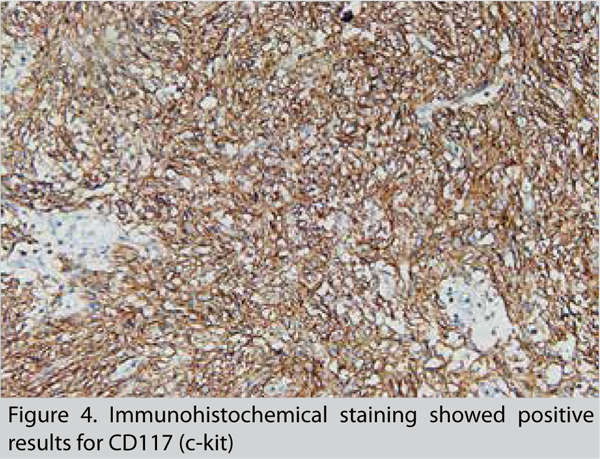 GISTs are visceral tumors arising from any site of the GI tract. Approximately 60%-70% of cases occur in the stomach, 25%-35% in the small intestine, and 10% in the jejunum, whereas the esophagus, colon, rectum, and appendix are rarely affected (5). Primary tumors are typically exophytic (79%), larger than 5 cm (84%), and non-homogeneously enhanced on CT scans (84%) (6). Metastatic seeding mostly occurs to the peritoneal cavity and liver, followed by to the lungs and bones. Lymph node spread is rare, and formal lymph node dissection has no proven value (7). Differential diagnosis can be performed using immunohistochemical markers such as KIT, CD34, ACAT2, S100, DES, and keratin (8). Presence of the KIT protein (CD117), a transmembrane receptor linked to an intracytoplasmic tyrosine kinase, is the classic finding for a GIST, and 95% of all cases are CD117-positive (7). Approximately 10%-30% of patients with a GIST may be asymptomatic. Gastric and small intestinal stromal tumors are usually associated with abdominal pain, GI bleeding, or a palpable mass. However, a GIST in the small intestine rarely causes hemoperitoneum. In addition to the tumor size, mitotic rate, and tumor location, tumor rupture is believed to be a prognostic factor for the outcome of patients with a GIST. The prognosis is dismal when the tumor presents with symptoms or signs such as perforation or rupture, multifocal location, or metastatic lesions. GISTs originating in the jejunum seldom cause perforation and acute diffuse peritonitis (9). A few cases have been reported in the English medical literature associated with perforation or rupture of a GIST in the small intestine. Bleeding into the peritoneal cavity on account of a ruptured GIST can lead to acute abdominal pain presenting as a surgical emergency (10). We have reported an unusual case of a large GIST of the jejunum that presented as spontaneous rupture. The mechanism underlying hemoperitoneum may be related to bleeding in the tumor leading to hematoma and rupture of the capsule or transudation of blood components from the tumor. In the present case, bleeding in the tumor leading to rupture of the capsule may have caused hemoperitoneum. Because of their high vascularity, GISTs are frequently associated with GI bleeding and have been associated with severe GI hemorrhage, requiring either embolization or emergency surgery. Our case study suggests that a GIST should be considered when acute non-traumatic hemoperitoneum is present, particularly if CT detects a heterogeneous mass with high vascularity.

Helical CT plays an important role in the diagnosis and identification of intraluminal or exophytic tumors. The differential diagnosis of GI tract tumors should include fibromatosis, leiomyoma, schwannoma, inflammatory fibroid polyp, and leiomyosarcoma (1). In most cases, strong positivity is observed for KIT (CD117) (approximately 95%) and CD34 (approximately 70%) (7). Therefore, positive results for these proteins in immunohistochemical examination help establish the diagnosis. Pathological factors that determine malignancy are tumor size, mitotic activity, pleomorphism of nuclei, degree of cellularity, nucleus/cytoplasm ratio, and mucosal invasion (5). GISTs can be categorized as low- or high-risk tumors by taking into account the possibility of metastasis or recurrence (3). The present patient was diagnosed with a high-risk malignant GIST because of the tumor size and rupture. Because rupture of a GIST is an important prognostic factor that makes it a high-risk tumor, care has to be taken during surgery to prevent complications such as iatrogenic perforations or ruptures. Although peritoneal metastasis was not seen in the present patient, we should pay attention to tumor recurrence because the tumor has ruptured. Surgical resection is the mainstay treatment for a localized GIST. This is because a GIST is more resistant to chemotherapy and radiotherapy than other GI tract tumors. A laparoscopic procedure is considered to be useful as a minimally invasive surgery for the diagnosis and treatment of select cases with a GIST in the small intestine (11). However, in our case, neither diagnostic nor therapeutic laparoscopy was performed because the presence of acute peritonitis with massive fluid in the peritoneal cavity indicated laparotomy to be more appropriate.

Spontaneous rupture is a rare presentation of a GIST and preoperative diagnosis is difficult because of the absence of pathognomonic signs or symptoms. A GIST should be suspected whenever there is presentation of sudden abdominal pain in patients with an intra-abdominal mass. We reported the case of a man with a GIST originating in the jejunum that presented as spontaneous rupture and led to hemoperitoneum.

Written informed consent was obtained from patient who participated in this study.