Modern treatment options for breast cancer have prolonged survival, especially in patients diagnosed at early stages. Weight gain is observed during or following adjuvant chemotherapy in breast cancer patients who were followed-up for a long period. The cause of weight gain has not been revealed in studies conducted so far. Previous studies have reported that having a high body mass index on diagnosis is a poor prognostic factor (1, 2). However, studies on the effect of weight changes in patients receiving adjuvant chemotherapy on survival reported conflicting results. Clarification of controllable factors that have an effect on survival, such as weight gain, will be beneficial in order to improve outcome in breast cancer treatment.

Doses of the drugs used in adjuvant chemotherapy regimens are determined based on extensive studies. It is aimed to achieve maximum efficiency by giving a minimum amount of drug in the calculation of these doses. In addition, the systemic side effects of the drug are intended to be minimized. Since drug doses are calculated according to body surface area, weight gain during chemotherapy may result in lower drug doses than planned. This in turn may lead to shorter disease-free and overall survival since these patients do not receive the required drug dose. In this study, we aimed to investigate the effect of weight gain during chemotherapy on survival in breast cancer patients treated in our clinic.

Patients who were diagnosed with breast cancer and received surgical and adjuvant chemotherapy in our clinic between May 2002 to May 2003 were enrolled in this prospective study. Patients who underwent neoadjuvant chemotherapy or chemotherapy for metastatic breast cancer were excluded. Demographic data (age, gender), and clinic-pathological characteristics (menopausal status, TNM stage, tumor estrogen, progesterone, and HER2 receptor status, grade) were recorded along with the chemotherapy regimens applied. Patient weight and height were measured before and at the end of chemotherapy. Patient’s body mass index (kg/m2) was calculated before treatment. Patients were grouped according to weight gain of more or less than 3 kg, and pre-treatment body mass index more or less than 30, based on measurements before and after chemotherapy. Effects of menopausal status, initial body mass index and the amount of weight gain during chemotherapy on disease-free and overall survival were evaluated.

Statistical Analysis
Statistical Package for the Social Sciences 15.0 (SPSS Inc., Chicago, Illinois, USA) was used for analysis. Descriptive statistics were presented as mean ± standard deviation for continuous variables, and as frequencies and percentages for categorical variables. For evaluation of disease-free and overall survival, log-rank test was used for univariate analysis and Cox regression analysis for multivariate analysis. P<0.05 was considered statistically significant.

The study enrolled 88 consecutive female patients. The median age of patients was 46 years (29-71). Demographic characteristics of patients and tumor histopathology are outlined in Table 1. There were 53 (60%) premenopausal patients. Most patients (66%) had stage II breast cancer. As surgical treatment, 65 patients (73.9%) underwent modified radical mastectomy while the remaining received breast-conserving therapy and axillary dissection. Axillary lymph node metastases were detected in 55 patients (62.5%). Twenty-eight patients had 1-3, 14 patients 4-9 and 13 patients had >9 lymph node metastases. Estrogen and progesterone receptors were positive in 50 (57%) and 59 (67%) patients, respectively. HER2 positivity was detected in 38 patients (43%). Patients mostly had grade 3 tumors (49%). The median body mass index before treatment was 27 (17-40). This value was higher than 30 in 26 patients (29.5%). 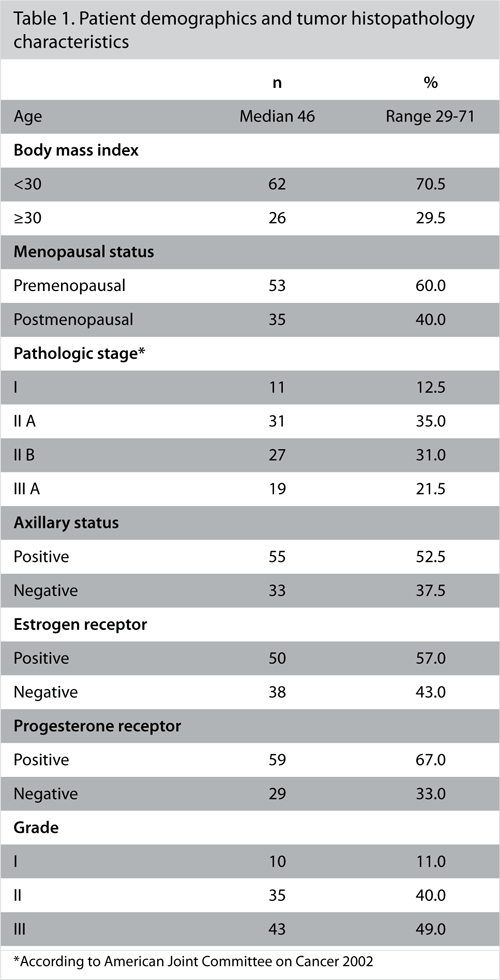 The anthracycline-containing chemotherapy regimens were applied in patients with proper indications according to the stage of breast cancer after surgical treatment. Chemotherapy was started within 3-6 weeks after surgery. Chemotherapy protocols included CAF (cyclophosphamide 600 mg/m2, doxorubicin 60 mg/m2, 5-fluorouracil 600 mg/m2) and CEF (cyclophosphamide 600 mg/m2, epirubicin 50 mg/m2, 5-fluorouracil 600 mg/m2). The anthracycline used in the chemotherapy protocol was epirubicin in 57 patients (65%), and doxorubicin in 31 patients. All patients received 6 cycles of chemotherapy in the planned doses. In addition, hormone receptor-positive patients were treated with tamoxifen or an aromatase inhibitor after chemotherapy according to their menopausal status.

Previous studies have reported high body mass index at the time of breast cancer diagnosis as a negative prognostic factor (1, 2). However, conflicting results have been published regarding the effect of weight gain during chemotherapy on prognosis. The difference in results may be due to reasons such as retrospective data analysis, administration of anthracycline-free chemotherapy protocols, lack of data if patients have received the planned doses or not, monitoring weight gain at different time intervals, and short follow-up period. According to results of our study, weight gain (>3 kg) during adjuvant chemotherapy in patients with breast cancer has negative effects on both disease-free and overall survival. This finding may be related to the prospective study plan, administration of standard chemotherapy protocol containing anthracycline, and a median follow-up period longer than 8 years. In contrast, it was determined that high body mass index at the time of diagnosis and menopausal status did not have an effect on either disease-free or overall survival.

There are studies on the effects of weight gain or obesity prior to the diagnosis of breast cancer on survival; however, there are only limited number of studies evaluating the progress during chemotherapy. In a recent meta-analysis of 43 studies, general and breast cancer specific mortality rates have been reported to be higher in obese women as compared to non-obese (respectively, HR=1.33, 95% CI: 1.21 to 1.47 and HR=1.33, 95% CI: 1.19 to 1.50). Nevertheless, when interpreting these results it should be considered that studies spanning over a wide time range (1963-2005) and with varying number of patients (100 to 424.168) were included in this meta-analysis (3). While weight gain before diagnosis increases the risk of breast cancer in postmenopausal women, both premenopausal and postmenopausal patients gain weight after diagnosis. Initial studies on weight gain in breast cancer detected weight gain in one fourth, with more than 10 kg increase in weight (3, 4). As it has been shown that weight gain may adversely affect prognosis of breast cancer, physicians began warning their patients about this effect thus resulting in a decrease in weight gain. In contrast to these, there are reports stating that patients who lose weight after diagnosis of breast cancer have a poor prognosis. In this case, whether the poor prognosis was related to weight loss or disease progression could not be clearly determined.

The results of studies on the effects of weight gain after diagnosis of breast cancer on prognosis are contradictory. Some studies report increased disease recurrence and mortality with weight gain (4, 8-10), while other studies did not reveal this relationship (11-13). Similar to our study, Thivat et al. (8) retrospectively investigated the effect of weight change on prognosis of patients receiving anthracycline-based chemotherapy protocol. Within a follow-up period of more than twenty-years, more than 5% change in weight during chemotherapy increased the risk of recurrence and mortality more than two-fold. In their study including 13000 patients, Caan et al. (14) reported that preservation of the same weight for a couple of years after diagnosis of breast cancer has a positive impact on the survival. In contrast, weight loss and concomitant diseases reduce survival rate. Bradshaw et al. (15) conducted a study on 1,436 patients, and reported poor prognosis in patients with more than 10% weight gain within 5 years of chemotherapy (HR=2.67, 95% CI: 1.37, 5.05). This negative effect was more prominent in those who gained weight within the first two years.

Similar to our results, in their series with more than 7 years follow-up Camoriano et al (4) reported that breast cancer patients with weight gain more than 5.9 kg had a 1.5 times higher recurrence rate and 1.6-fold increase in mortality. Similarly, in the Nurses’ Health Study with 5,000 patients, weight gain was reported as a factor that increased both recurrence and mortality in breast cancer (9). In contrast to these, studies not reporting weight gain in patients treated with anthracycline-containing chemotherapy regimens are also available (8).

Different mechanisms have been proposed to explain the negative prognostic effects of weight gain in breast cancer patients. The increase in fat tissue in the body with weight gain leads to increased estrogen production particularly in postmenopausal women, and reduced sex hormone binding protein. As a result of these changes, the increased free estrogen in the blood may play a role in local-regional recurrence of breast cancer, formation of a new cancer in the opposite breast and distant metastases. Additionally, an increase in insulin, insulin resistance and C-peptide levels is also detected in this patient group, leading to hyperglycemia. Similarly, an increase in inflammatory markers such as C-reactive protein and interleukins has been reported in breast cancer patients with weight gain (1, 16). The resulting metabolic scenario has a negative impact on the prognosis of breast cancer. In addition to these, it has been reported that insulin and insulin-like growth factors lead to the development of resistance to chemotherapy and radiotherapy in tumor cells (17).

Patients usually implement high carbohydrate diet during adjuvant chemotherapy due to fear of losing weight. In addition, they consume foods low in fat and rich in fruits and vegetables. The weight loss during adjuvant therapy or follow-up of breast cancer patients is not due to the inability to feed but due to aggressive tumor biology and accelerated metabolism. Patients with early breast cancer should not be eating more than usual, since these alterations are unlikely. The nutrition strategy in breast cancer patients should be directed at reduction of excess weight while restricting carbohydrates, and increasing fat and protein intake (18-20). To improve prognosis in breast cancer patients, it is suggested that physical activity and a diet rich in fruits, vegetables and grains that are low in fat and refined carbohydrates should be increased (21). Weight control methods should be individualized for patients with breast cancer, as is the case in adjuvant therapy. Exercise and dietary recommendations should be made in accordance with the patient’s body mass index, the muscle-fat ratio and existing co-morbidities prior to diagnosis. Studies have shown high rate of patient compliance with exercise and diet programs initiated during chemotherapy (22, 23).

Study Limitations
Study limitations include the relatively small number of patients, and lack of data on distribution of excess weight in the tissues. Weight measurements were made during chemotherapy, and if weight gain was monitored further in the follow-up of patients after chemotherapy, it is likely that patients with ongoing weight gain would have a shorter survival.

According to our study results, weight gain (> 3 kg) during adjuvant chemotherapy in patients with breast cancer negatively affects both disease-free and overall survival. In contrast, high body mass index on diagnosis and menopausal status were not found to influence either disease-free or overall survival.

Ethics committee approval was not received for this study since it only involved weight measurement.