Does endoscopic retrograde cholangiopancreatography have a negative effect on laparoscopic cholecystectomy?

Objective: We have observed that patients who had undergone endoscopic retrograde cholangiopancreatography (ERCP) had some difficulties with laparoscopic cholecystectomy procedures. Through a retrospective study, we planned to compare the surgical procedures between patients who had undergone ERCP and those who had not in order to clarify this.
Material and Methods: The results of 122 patients who had undergone ERCP because of choledocholithiasis before undergoing laparoscopic cholecystectomy procedures between 2008 and 2011 were compared to the values of 2140 patients operated because of cholelithiasis only within the same period.
Results: Among the patients who underwent surgical procedures following ERCP, 80 (65%) were female and 42 (35%) were male. The average age of the patients was 51.9 years (range: 20-83 years). The operation period after the procedure was 30.14 days (range: 1-93 days). Although the hospitalization period was 4.67 days (range: 1-22 days), the postoperative hospitalization period was 2.68 days (range: 1-15 days). Regarding the difficulty of operation, adhesion in 58 (47.5%) patients, bleeding in two (1.6%) patients, and conversion to open procedure in 12 (9.8) patients were observed. In two (1.6%) patients, bleeding and biliary fistula were the reasons for re-operation.
Conclusion: Laparoscopic cholecystectomy is more complicated in patients who underwent ERCP.

Laparoscopic cholecystectomy (LC) has become the gold standard in the treatment of the benign diseases of the gallbladder because it is an easy, effective, and comfortable procedure with good cosmetic results (1). Sometimes problems might occur in such preferred procedures. The reasons of these problems include adhesions, bleeding, structural anomalies, technical inadequacy, and inexperience. Post-LC complications include bleeding, bile duct injury, bile leak, residual stone, pancreatitis, scar site infections, incisional hernias, and intestinal organ injury. Findings in favor of choledochal stone in the anamnesis of the patients who will have LCs are an indication for therapeutic endoscopic retrograde cholangiopancreatography (ERCP) before or after the LC.

Endoscopic retrograde cholangiopancreatography is a method used in the imaging of bile ducts and the pancreatic channel and in the treatment of obstructions. Endoscopic retrograde cholangiopancreatography is an effective diagnostic and therapeutic method, but it also has serious complications (2), which include first of all pancreatitis followed by cholangitis, bleeding, perforation, and cardiorespiratory complications. Therefore, ERCP should be used for therapeutic purposes.

We believe that LC will not be easy in cases of ERCP indication. We think that the complexity of LC depends more on the primary pathology rather than a difficulty caused by ERCP itself. Thus, this study was planned in order to determine the contributions by ERCP to more complicated LCs, if any.

The results of 122 patients who had undergone ERCP (papillotomy, stone extraction) because of choledocholithiasis before undergoing LC between 2008 and 2011 at Medical School’s Endoscopy Unit were compared to those of 2140 patients operated because of cholelithiasis within the same period. The patients were compared regarding gender, age, the time of procedure, total hospitalization period, post-op hospitalization period, difficulty of procedure, the rate of drain use, the rate of conversion to open procedure, and the reasons for re-operation. Patients with complications during ERCP, those who previously underwent laparotomy for any reason, and those on antiaggregant and anticoagulant therapies were not included in the study. Patients with acute and chronic cholecystitis were covered by the study.

Among the patients who underwent ERCP, 80 (65%) were female and 42 (35%) were male. Thirty-eight (31.15%) patients underwent magnetic resonance cholangiopancreatography (MRCP) prior to ERCP. The operation period after the procedure was 30.14 min (range: 10-93 min). Although the hospitalization period was 4.67 days (range: 1-22 days), the postoperative hospitalization period was 2.68 days (range: 1-15 days). Regarding the difficulty of operation, adhesion in 58 (47.5%) patients (adhesion to the gallbladder and hepatoduodenal ligament when the gallbladder was taken from the fundus to the traction), bleeding in two (1.6%) patients (bleeding during the LC from the liver bed and the Calot triangle that could be stopped by a clip or cautery), and conversion to open procedure in 12 (9.8%) patients (patients that could not be visualized adequately or all patients in whom the laparoscopic procedure could not be sustained) were observed. In two (1.6%) patients, bleeding and biliary fistula were the reasons for re-operation. Reasons for re-operation included bleeding in two (1.6%) patients that caused hemodynamic instability, despite resuscitation within the first 24 h, and biliary fistula in two patients that did not decrease more than 500 cc and continued up to a week. Eighty-two (67.21%) patients had drains during the procedure. Eight (6.56%) patients had previous biliary pancreatitis.

Among the patients who were diagnosed with symptomatic cholelithiasis without the need for ERCP, 1605 (75%) were female and 535 (25%) were male. The average age of the patients was 55 years (range: 18-88 years), and 107 (5%) patients underwent MRCP in the preoperative period. The hospitalization period was 3.05 days (range: 2-9 days). The postoperative hospitalization period was 1.53 days (range: 1-4). Regarding the difficulty of operation, adhesion in 642 (30%) patients, bleeding in 107 (5%) patients, and conversion to open procedure in 22 (1%) patients were observed. The reasons for conversion to open procedure were bleeding in 10 (47%) patients and adhesion in 12 (56%) patients. The rate of drain implementation at the end of the procedure was 40% (856 patients). Bleeding was the reason for re-operation in 10 (0.47%) patients. There were 107 (5%) patients who were treated for biliary pancreatitis. All these values are summarized in Table 1.

Table 1. The data for all patient groups 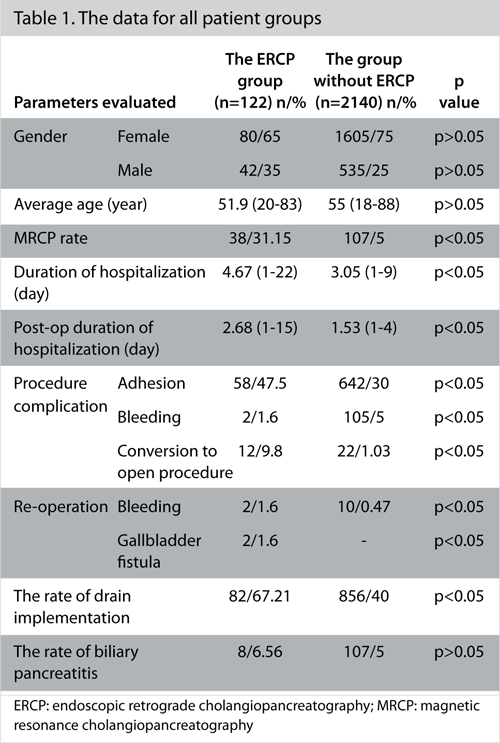 There was no statistically significant difference in the rates of re-operation because of biliary pancreatitis and bleeding between the groups regarding gender and age. There was statistically difference between groups with disadvantage of ERCP regarding preoperative and postoperative hospital stay, adhesion, bleeding, conversion rate to open procedure, reoperation due to biliary leak and drain implementation (Table 1).

Laparoscopic cholecystectomy has become a frequently preferred procedure for all age groups because of the increased rate of laparoscopic experience and techniques. Patients with complications that were previously considered to be contraindicated are now being treated by LC successfully. Gallbladder stones are seen 4 times more between the ages of 40 and 69 than other age groups. They are seen more in female patients than male patients in all age groups. The average age of our patients was 57.8 years and the number of female patients was characteristically higher.

Major complications during the LC include injuries to vascular structures, intestinal organs, mesenteric structures, and the biliary system. In such cases, emergency laparotomy might be required. In this manner, a more careful approach can be achieved through direct palpation or observation (5). Many studies report the rate of conversion to open procedure in LC as 9.5% (6-8). In this study, the most common procedural difficulty was adhesion and bleeding in patients with ERCP. Was the formation of these adhesions due to ERCP or were they already present because of a primary disease? Did ERCP contribute to this? Can we argue that ERCP had no significant contribution to these adhesions caused by this primary event? Our response to these questions is that these LCs would not be easy even without ERCP. These patients already had adhesions because of cholangitis and cholecystitis with stones. The stones in the common bile duct are mostly secondary (they are stones falling from the gallbladder). There might be anomalies in the bile ducts such as a short and wide cystic channel. It is clear that when a tissue without anatomy is infected, its dissection will be more complicated. Moreover, these patients stayed silent or otherwise relapses during the chronic time period. All inflammatory attacks cause adhesions following more or less fibrosis formation. Controllable bleeding occurred more frequently than adhesions in our patients during the LC, who did not undergo ERCP. Although the rate of conversion to open procedure was 9.8% in patients with ERCP, it was 1.03% in the group without ERCP (p<0.05). Although our results were similar to those reported in literature regarding the rate of conversion to open procedure in patients with ERCP, this rate is much less in patients who did not undergo ERCP. Biliary pancreatitis rates, which we regarded as a factor increasing adhesion, were similar in both groups.

Bleeding rarely occurs in noncirrhotic patients following LC. Bleedings in the liver bed are generally controlled by electrocautery. During major vein injuries, conversion to open procedure might be required for bleeding control. Re-operation might also be required for patients with hemodynamic imbalance for post-operative bleeding. In patients with stable hemodynamics, however, conservative treatment might be implemented. In this study, 1.6% of the patients with ERCP had controllable bleeding during LC, whereas 1.6% of the patients had bleeding warranting re-operation, and 5% of the patients who did not undergo ERCP had controllable bleeding during LC, whereas 0.47% of them had bleeding warranting re-operation. The rate of conversion to open procedure due to bleeding in patients with ERCP was significantly higher (p<0.05).

One of the significant complications that the surgeons face during the LC is bile leaks, which are brought about by three causes (9-15): the Luschka channel in the liver bed, the cystic channel, or extrahepatic channel injuries. If drain was implemented following LC, bile leak occurs and early diagnosis can be obtained (14). However, if there is no drain or a failing drain, the patient might have clinical deterioration, persistent abdominal pain, ileus, fever, and hyperbilirubinemia. Subhepatic, perihepatic, or intraperitoneal free fluid is seen in the imaging results of such patients (9). Two (1.6%) patients with ERCP had bile leaks and were re-operated. None of the patients who did not undergo ERCP had bile leaks warranting re-operation.

Data in the literature suggest that there are more adhesions following ERCP in choledocholithiasis cases (10). In another study, the authors stated that the LC procedure was more complicated in patients with ERCP (11). Only adhesion was taken as a criterion for this conclusion. No detailed analysis was performed as in our study. In our series, patients with LC with and without ERCP were compared regarding adhesion, gender, age, time of operation, duration of hospitalization, postoperative hospitalization, bleeding, rate of drain implementation, rate of conversion to open procedure, and causes of re-operation. It was reported that the ideal LC time following ERCP was between second and sixth weeks and undergoing LC before 2 weeks would be more complicated (12). Our patients have been undergoing LC following ERCP within an average of 30 days.

The reason why LC is more complicated in patients undergoing ERCP might not be ERCP itself. The primary pathologies of these patients make LC more complicated. Thus, we believe that it is not accurate to consider ERCP as the reason for complicated LCs. It is clear that there may be complications in cases where no ERCPs were performed.

Laparoscopic cholecystectomy is complicated in cases of ERCP indication. ERCP may slightly increase this complication or ERCP without complications may not have a negative effect on LC. In patients undergoing ERCP, the rate of conversion to open procedure is higher because of common adhesion and bleeding, and the duration of postoperative hospitalization is longer.

Ethics committee approval was not required, since the study was a retrospective study.

Informed patient consent form including their treatment protocol was taken from all patients included in this study.