Umbilical hernia is a rather common surgical problem. Elective repair after diagnosis is advised. Suture repairs have high recurrence rates; therefore, mesh reinforcement is recommended. Mesh can be placed through either an open or laparoscopic approach with good clinical results. Standard polypropylene mesh is suitable for the open onlay technique; however, composite meshes are required for laparoscopic repairs. Large seromas and surgical site infection are rather common complications that may result in recurrence. Obesity, ascites, and excessive weight gain following repair are obviously potential risk factors. Moreover, smoking may create a risk for recurrence.

In general, umbilical hernias are more common in women than men; however, there are series in which male patients are more frequent (5). Typically, a lump is observed around the umbilicus. Pain is the most common indication to visit a physician and undergo a repair (6). Recurrence may develop even in cases where a prosthetic mesh is used. Recurrent umbilical hernias often tend to enlarge faster than primary ones and may behave as incisional hernias.

An umbilical hernia has a tendency to be associated with high morbidity and mortality in comparison with inguinal hernia because of the higher risk of incarceration and strangulation that require an emergency repair. Although the number of articles with the title word “umbilical hernia” increased 2.6-fold between the periods 1991–2000 and 2001–2010, there still appears to be a certain discrepancy between its importance and the attention it has received in the literature (7). In this paper, the nature of the umbilical hernias is reviewed, and the current options for their surgical repair are discussed.

Anatomic Description
Many hernias in the umbilical region occur above or below the umbilicus through a weak place at the linea alba, rather than directly through the umbilicus itself, and the natural history and treatment do not differ for these hernias. The European Hernia Society classification (8) for primary abdominal wall hernias defines the midline hernias from 3 cm above to 3 cm below the umbilicus as umbilical hernia (Figure 1). 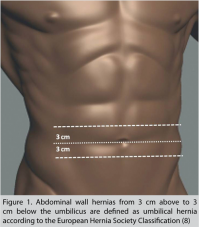 Figure 1. Abdominal wall hernias from 3 cm above to 3 cm below the umbilicus are defined as umbilical hernia according to the European Hernia Society Classification (8)
× 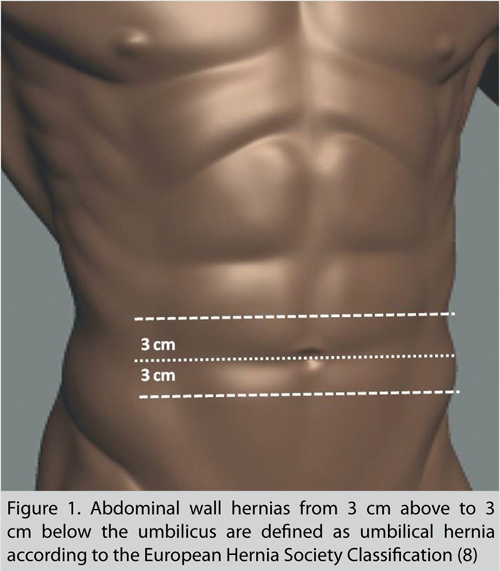 The borders of the umbilical canal are the umbilical fascia posteriorly, the linea alba anteriorly and medial edges of the two rectus sheaths on two sides. Herniation happens due to increasing intra-abdominal pressure. Predisposing factors include obesity, multiple pregnancies, ascites, and abdominal tumors (9). The content of the hernia sac may be preperitoneal fat tissue, omentum, and small intestine in the majority; a combination of those can take part. Large intestines are very rarely involved (10). The neck of the umbilical hernia is usually narrow compared with the size of the herniated mass, hence, strangulation is common. Therefore, an elective repair after diagnosis is advised.


Anesthesia
All three types of anesthesia (local, general, and spinal) are suitable in most cases. The patient and surgeon should make a decision regarding the type of anesthesia to be used before surgery. Local anesthesia often provides maximum comfort for patients when it is accurately performed in open repairs. Some centers routinely use local anesthesia (5, 11, 12). However, inexperience with the local anesthetic technique may cause discomfort to patients with an increased recurrence rate. Local anesthesia may also be challenging if the patient is obese and hernia is large and/or recurrent (13). In patients with ASA I or II scores and who have one of the specific difficulties above, the surgeon should better choose general anesthesia to feel more secure because the quality of repair is the most important outcome measure.

Deysine (14) recommended topical gentamicin in addition to preoperative intravenous prophylaxis to lower the infection rates after hernia repairs. He reported no surgical site infections in hernia surgery after setting this prophylaxis combination for 24 consecutive years. Although gentamicin is most effective against gram-negative bacteria, it is also effective against staphylococci. Furthermore, it has been stated that gentamicin can demonstrate antimicrobial synergy with cefazolin for a more successful antibacterial effect (16).

Which Repair Technique?
There are mainly two repair options for umbilical hernias: suture and mesh. Simple primary suture repair can be used for small defects (<2–3 cm). The technique of overlapping abdominal wall fascia in a ‘‘vest-over-pants’’ manner was described by William Mayo (17) and remained the most renowned surgical technique for a long time. There are few clinical studies with Mayo technique in the literature (6, 12). High recurrence rates up to 28% have been reported (10).

Prosthetic materials are widely used today in the repair of all kind of abdominal hernias. Arroyo et al’s (18) randomized clinical trial revealed that the recurrence rate was lower after mesh repair than that after suture repair (1% vs. 11%) in a 64-month mean postoperative follow-up. In a retrospective clinical series of 100 patients, the recurrence rates for the suture and mesh repair groups were 11.5 and 0%, respectively (p=0.007), with a similar results in the infection rates in favor of mesh repair (19). A systematic review and meta-analysis by Aslani and Brown (20) revealed that the use of mesh in umbilical hernia repair results in decreased recurrence and similar wound complication rates compared with tissue repair for primary umbilical hernias. However, many surgeons still make his/her decision on the basis of the size of the umbilical/paraumbilical defect. Dalenbäck (21) suggested a tailored repair and stated that suture-based methods for defects <2 cm can provide acceptable recurrence rates (6%) in long-term follow-up. A postal questionnaire study from Scotland revealed that surgeons preferred mesh repair for defects >5 cm, whereas similar preference rates for suture and mesh repairs were obtained for defects <2 cm (22).

Meshes can be placed via both the open and laparoscopic approaches. Surgeons in general prefer the most familiar technique or comply with the patients’ preferences. Open onlay mesh placement is the easiest technique; however, it requires subcutaneous dissection that may cause seroma or hematoma and eventually result in surgical site infection in some cases. Mesh can also be placed in a preperitoneal or sublay position (5, 11). This may require more surgical experience and skill but avoids extensive subcutaneous dissection and reduces seroma formation and possibly result in less recurrence. Onlay and sublay mesh placement can be done at the same time in complicated or recurrent cases to provide more reinforced repair. Some authors prefer leaving fascial margins without approximation; however, suture closure before onlay mesh or after preperitoneal mesh is recommended.

Furthermore, mesh plug repair was described for umbilical hernias. It can be performed with local anesthesia (23, 24). However, there is no controlled study to compare plug repair with other techniques. Besides plug repairs have the risk of migration and enterocutaneous fistula formation (25).

Laparoscopic umbilical hernia repair has been practiced since late 1990s (26, 27). Single-port repairs have also recently been reported (28). Laparoscopic technique is basically a mesh repair; however, laparoscopic primary suture repair without prosthetic material has also been experienced (29). In contrast, Banerjee et al. (30) compared the laparoscopic mesh placement without defect closure with laparoscopic suture and mesh in a clinical study and reported a slightly lower recurrence rate in the latter group, particularly for recurrent hernias.
Today the utilization of laparoscopy for umbilical hernia repair remains relatively low in the world. Laparoscopy is preferred in just a quarter of the cases (31). There are a few studies comparing open and laparoscopic repairs for umbilical hernias. Short-term outcomes from the American College of Surgeons National Surgery Quality Improvement Program recently revealed a potential decrease in the total and wound morbidity associated with laparoscopic repair for elective primary umbilical hernia repairs at the expense of longer operative time and length of hospital stay and increased respiratory and cardiac complications (32). In their multivariate model, after controlling for body mass index, gender, the American Society of Anesthesiologists class, and chronic obstructive pulmonary disease, the odds ratio for overall complications favored laparoscopic repair (OR=0.60; p=0.01). This difference was primarily driven by the reduced wound complication rate in laparoscopy group.

Obese patients with umbilical hernia comprise a special group. A recent comparative study by Colon et al. (34) stated that laparoscopic umbilical hernia repair should be the preferred approach in obese patients. They found a significant increase in wound infection rate in the open mesh repair group when compared with the laparoscopic procedure (26% vs. 4%; p<0.05). They observed no hernia recurrence in the laparoscopic group, whereas the open group had 4% recurrence rate. In contrast, Kulacoglu et al. (5) demonstrated that obese patients also require more local anesthetic dose in open mesh repair.

A summary of current repair options for umbilical hernias are presented in Table 1.

Table 1. A classification of current repair techniques for umbilical hernias 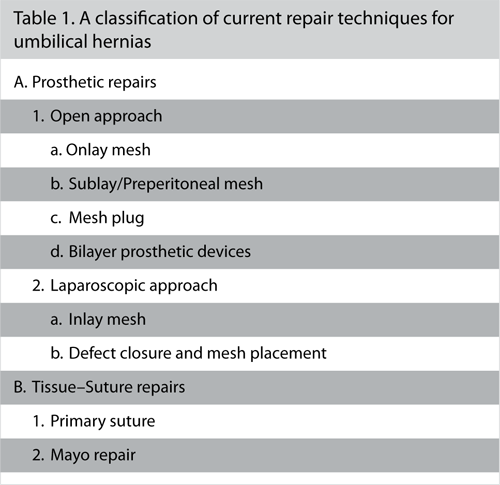 Which Mesh?
Standard polypropylene mesh is the most frequently used prosthetic material particularly in open onlay repairs. Lightweight macroporous meshes are also in use. Both types of meshes are suitable for onlay and sublay placement. Reducing the density of polypropylene and creating a “light weight” mesh theoretically induces less foreign body response, results in improved abdominal wall compliance, causes less contraction or shrinkage of the mesh, and enables better tissue incorporation; however, their clinical advantages have not been clearly documented (35).

Newer bilayer prosthetic devices are designed for open intraperitoneal inlay placement. They have two sides, one is polypropylene and the other side is a non-adherent material to face viscera. Two tails that are connected to the bilayer patch were sutured to fascial edges to avoid migration. Promising early results have been reported; however, these prostheses are expensive, and prospective randomized comparative studies have not yet been conducted (36-38). It has been reported that recurrence after this kind of bilayer prosthesis is higher in comparison with that after classical sublay mesh placements possibly because of the less controllable mesh deployment (39).
Bilayer polypropylene or partially reabsorbable meshes have also been used for umbilical hernias. They comprised one sublay and one overlay patch with a connector to eliminate migration. However, clinical outcomes after repairs with these devices have not been widely documented (40).

Choice of mesh appears to be more important for laparoscopic repairs (41). Composite meshes are preferred materials in most institutions to avoid the risk of visceral adhesion into the mesh (42, 43). There are numerous composite or dual-side meshes in the market; the results of the clinical and experimental studies testing their strength, durability, and safety regarding both recurrence and adhesion formation widely differ.

Although standard polypropylene mesh is easy to find and a much more economic choice, its use in laparoscopic ventral hernia repairs, including umbilical hernias, has certain risks. Sarela (44) stated that the financial-cost to clinical-benefit ratio for the use of expensive composite meshes is unquantified and is likely to remain as such because given the widespread acceptance of composite products, a randomized clinical comparison with simple polypropylene mesh is unlikely to occur. In selected circumstances, it may be acceptable to use a simple mesh if this can be completely excluded from bowel by interposition of omentum; however, a composite mesh should be considered as the current standard of care.

Large seroma and surgical site infection are classical complications that may result in recurrence. Obesity and excessive weight gain following repair are obviously potential risk factors. The patient’s BMI >30 kg/m2 and defects >2 cm have been reported as possible factors for surgical failure (45). Moreover, smoking may create a risk for recurrence (46).

Ascites is a well-known risk factor for recurrence. Traditionally, umbilical hernia in patients with cirrhosis and with uncontrolled ascites was associated with significant mortality and morbidity and a significantly greater incidence of recurrence (47). However, recent reports for elective repair are more promising, and there is tendency to perform elective repair to avoid emergency surgery for complications associated with very high mortality and morbidity rates (48, 49). Early elective repair of umbilical hernias in patients with cirrhosis is advocated considering the hepatic reserve and patient’s condition (50). Ascites control is the mainstay of post-operative management.