Objective: Arsenic exposure is increasing in communities due to environmental pollution and industrial development. Arsenic is toxic to organ systems because it causes oxidative stress, enzymatic inhibition, and damage to protein structures. The liver, for example, is an organ that may be damaged by arsenic, and this damage may cause various clinical conditions like hepatic failure or cancer. Melatonin is a hormone that acts like an antioxidant, an anti-inflammatory agent, and a cytoprotective agent. In this study, we aimed to evaluate melatonin’s protective effects on livers damaged by arsenic toxicity.
Material and Methods: Twenty-four Sprague-Dawley male rats were classified into three groups: a control group, an arsenic applied group, and an arsenic plus 10 mg/kg melatonin applied group. At the end of the fifteen-day experiment, the rats were sacrificed. Albumin, Interleukin-6 (IL-6), Total Protein, Alanine Transaminase, serum Aspartate Transaminase, Macrophage migration inhibitory factor, and Monocyte chemotactic protein 1 measurements were taken.
Results: In rats with liver damage due to arsenic exposure, melatonin administration significantly decreased the levels of IL-6, macrophage migration inhibitory factor, and monocyte chemotactic protein 1 (by p<0.001, p=0.02 and p=0.04, respectively).
Conclusion: After evaluating liver enzymes and inflammatory markers, this study determined that melatonin exposure improves liver tissue damage caused by arsenic exposure with the degree of improvement varying based on the levels of arsenic exposure.

Arsenic, one of the most prevalent element on earth, belongs to the group of heavy metals (1, 2). Inorganic arsenic, which is the most prevalent type, dominates sea water, surface waters, and underground water. Conversely, organic forms of arsenic are found within natural gas and petroleum (3). Arsenic can easily change oxidation steps and chemical forms in nature. Arsenic valence and type are affected by redox potential, pH of the water, microbiologic activity, and the presence of ions like sulfur, iron, and calcium (3). In recent years, arsenic exposure has increased because of pollution and industrial development (4). Particularly, the agriculture chemicals used in dyes, ceramics, cancer drugs, mining operations, and herbicides and insecticides are leading routes of exposition (5-7). Long periods of arsenic intake by mouth or through inhalation cause both metabolic and structural changes in the hepatocyte mitochondria (8). Arsenic causes hepatocyte degeneration, inflammation, and necrosis. It also causes increased apoptosis, oxidative damage, and damage at lipid peroxidation (9, 10).

Melatonin is primarily secreted from a neuroendocrine organ called the pineal gland. It is also secreted from the skin, the retina, testicles, bone marrow, thrombocytes, lymphocytes, and the gastrointestinal system (11-17). Melatonin synthesis and release are both stimulated by darkness and repressed by light. Melatonin is a strong free radical sweeper agent, as demonstrated in both in vivo and in vitro studies (18-20). It is much more powerful than all known antioxidants due to its free radical catching effects. Studies have shown that it is a more potent antioxidant than vitamin E and glutathione (21, 22). This is primarily because melatonin can dissolve in either water or fat, thus affecting all cell components (19-23). Melatonin also reportedly has regulatory effects on immunity and anti-inflammation (24-26). The aim of this study was to investigate the regulatory effects of melatonin on arsenic toxicity by monitoring hepatic enzymes and inflammatory markers in rats whose livers were intentionally damaged by arsenic for experimental purposes.

Study Group
Twenty-four male Sprague-Dawley rats were used in the experiment. Rats were kept at 22°C under illumination control (14 hours light/10 hours dark cycle). They were monitored in standard cages in an air-conditioned room. All rats weighed 250-300 g and were obtained from the animals laboratory at Namık Kemal University. The use of laboratory animals, animal experiments, and procedures were performed in accordance with national guidelines for care and were approved by the Namık Kemal University Animal Experiment Local Ethics Committee (NKU-HADYEK Decision No: 03/2015). The group formation was planned as follows:
The control group (n=8) was given 10 mL/kg of 0.9% NaCl every day through intragastric gavage for 15 days.

The arsenic group (n=8) was given 10 mg/kg of sodium arsenite (Sodium metaarsenite, Sigma-Aldrich Sodium metaarsenite >=90% Steinheim, Germany) every day by dissolving it into distilled water through intragastric gavage for 15 days.

At the end of the 15-day experiment period, all rat weights were measured, and they were then sacrificed. Blood was drawn from the left ventricle under deep Ketamine (90 mg/kg) and Xylazine (10 mg/kg) anesthesia. For chemical measurements, samples were drawn into gelled vacuum tubes and then centrifuged at 2750 g RCF for 10 minutes in a cool centrifuge. Serums were kept at -80oC until the measurements were taken.

Statistical Analysis
Statistical Package for the Social Sciences 16.0 software for Windows (SPSS Inc; Chicago, IL, USA) was used to statistically evaluate the data. A Shapiro-Wilk test was used for group distribution (i.e., homogeneity), a Student’s t-test (i.e., for the homogenous group and parametric values), and a Mann-Whitney U test (i.e., for the heterogeneous group and non-parametric values) was used for binary comprehension. A p value <0.05 was accepted as statistically significant. Numerical values were expressed as average ± standard deviation (SD) or median and minimum-maximum values. 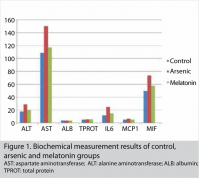 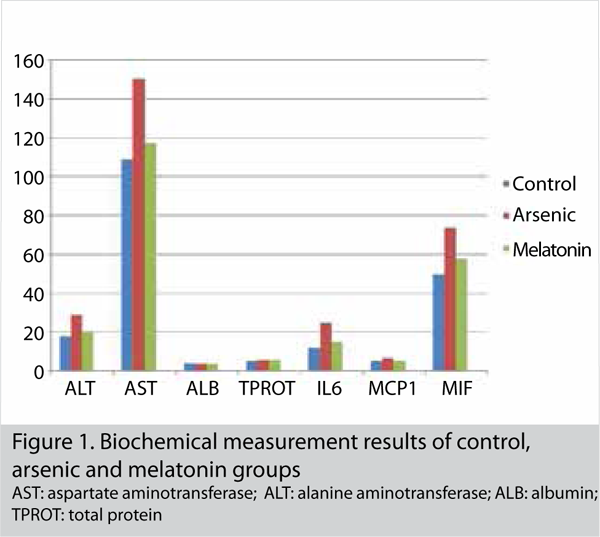 Table 1. Results of biochemical measurements at study and control groups 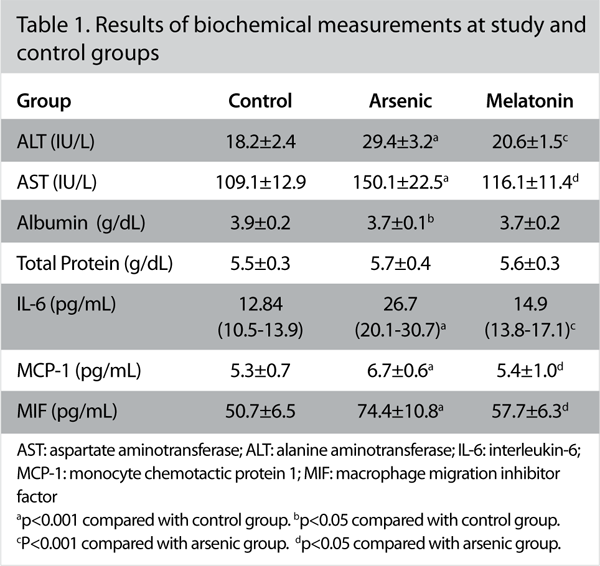 Oxidative stress plays an important role in liver damage that has been caused by arsenic toxicity. Oxidative stress is defined as imbalances between antioxidant defense mechanisms and the production of free radicals, which cause peroxidation of cell lipid layers. Intracellular and extracellular lipid peroxidation increases cell, tissue, and organ damage. Also, arsenic may inhibit many enzymes and damage protein structures. The cytokines secreted after cellular damage increases the migration of inflammation to cells and tissues, so the inflammatory period is triggered (27, 28).
The hormone melatonin plays a role in physiological functions like regulating the endocrine system, increasing immune functions, regulating smooth muscle tonus, and repressing gonadal functions (29). It also reportedly regulates interleukin responses, saves cellular structures in the liver, and increases survival through the antioxidant effect (30).

Many researchers reported that melatonin’s antioxidant effects can repair liver damage caused by heavy metals and accumulations of toxic materials (30-32). However, its anti-inflammatory effects have not yet been proven. In this study, hepatic enzymes, IL-6, MIF, and MCP-1 were used to evaluate the protective effects of melatonin in livers damaged by arsenic.

Two enzymes in particular, ALT and AST, enable amino group transfer during amino acid metabolism and gluconeogenesis (33, 34). Increases in aminotransferase serum levels are important indicators for acute or chronic liver damage (35). Arsenic reportedly has toxic effects on the liver and chronic exposure can cause different clinical scenarios ranging from liver damage to cancer (36).

Interleukin-6 (IL-6) is secreted from monocytes, fibroblasts, endothelium cells, and B lymphocytes, but its main secretion source is T lymphocytes, and it basically activates monocytes and macrophages. It is a pro-inflammatory cytokine that stimulates B lymphocyte differentiation and antibody secretion (40). Although melatonin has anti-inflammatory effects, clinical studies about the effects of melatonin on IL-6 are sometimes contradictory. Srinivasan et al. (41) reported that melatonin increases IL-2, IL-6, IL-12, and interferon (IFN) gamma levels by stimulating cytokine production, and that it has an oncostatic effect. Conversely, Broncel et al. (42) reported that melatonin decreases IL-6, IL-12, TNF-alpha, and IFN gamma levels. In our study, IL-6 levels were significantly increased in the arsenic group when compared with the control group. There were significant decreases in the melatonin group when compared with the arsenic group. These findings support the conclusion that melatonin decreases cytokine secretion and exhibits a hepatoprotective effect via an anti-inflammatory mechanism.

Animal studies have determined that arsenic exposure stimulates IL-6, MCP-1, and vascular endothelial growing factor gene expression. It also triggers an inflammatory period where applied alpha lipoic acid decreases proinflammatory molecule levels (43). In another study, arsenic reportedly stimulated production of proinflammatory cytokines, IL-1B, IL-6, MCP-1, and C reactive protein through inducible nitric oxide synthase (iNOS) in the vascular system (27). There are no data in the literature on the effects of melatonin on MCP-1 levels during arsenic toxicity. In our study, MCP-1 levels were lowered with application of melatonin to liver tissues with arsenic toxicity. Also, proinflammatory cytokines were repressed in either the liver or damaged tissues. This lead to the conclusion that melatonin is an important factor for healing.

The MIF is a complex protein showing the properties of an inflammatory cytokine, a neuroendocrine hormone, and an enzyme, while its main effect is decreasing macrophage migration (44). Additionally, MIF exhibits proinflammatory effects by secreting NO and activating the cyclooxygenase pathway as well as by stimulating tumor necrosis factor-alpha, IL-1B, IL-2, IL-6, IL-8, IFN-c, and adhesion molecules (45). Furthermore, MIF neutralization is decreased. According to different animal study models (46, 47), its release increases liver damage caused by alcohol and various toxic substances. Getting MIF levels under control is important in the treatment of many inflammatory diseases. There have been clinical studies on MIF antagonists over the last few years (48). In our study, melatonin significantly decreased MIF levels that had been increased by arsenic exposure. Proinflammatory cytokine release was decreased to address inflammatory damage, and macrophage migration was resolved.

This study concerning liver enzymes and inflammatory markers detected that melatonin has therapeutic effects on liver tissues that were damaged by arsenic exposure.