Objective: We aimed to evaluate the effect of intraperitoneal cetuximab administration on the healing of anastomosis and development of early adhesion formation in a rat model.
Materials and Methods: Twenty-four female rats were used. A colon segment was resected and end-to-end anastomosis was performed. The rats were randomized into three groups after the performance of colonic anastomosis and received 10 mL of intraperitoneal solution including study drugs after closure of abdominal cavity: normal saline was administered to the normal saline group (n=8), cetuximab (400 mg/m2) was administered to the postoperative 1 group (n=8) 1 day after surgery, and cetuximab (400 mg/m2) was administered to the peroperative group (n=8) during surgery.
Results: The mean adhesion grade was 2.63±0.92, and 0.50±0.76 and 0.63±0.74 for control and test groups, respectively. Cetuximab reduced adhesion formation in test groups (p<0.05). When all groups were compared, it was found that vascular endothelial growth factor levels decreased significantly only in the abdomen (p<0.05). Hydroxyproline levels and anastomosis bursting pressure were examined, and a statistical difference was found between groups (hydroxyproline p<0.05, bursting pressure p<0.05). However, when postoperative 1 day group was compared with the control group, it was found that there was no difference between groups according to these parameters (p>0.05), but when peroperative group was compared with the control group a significant decrease was observed in both parameters. Histopathological healing score was also evaluated. No statistical difference between groups was found.
Conclusion: Twenty-four hours later from the operation, intraperitoneal cetuximab therapy may be a safe and feasible treatment for metastatic colorectal patients.

Peritoneal spreading from colorectal cancer (CRC) is refractory to chemotherapy. In recent years, intraperitoneal (IP) chemotherapy (IPCT) developing as a new oncological treatment has been used for locoregional control and long-term survival (1). Immediate IPCT after surgical procedure for colon cancer exterminates cancer cells that may have been spreaded during resection. It prevents micrometastasis (2-4). This is an important factor determining the outcome of patients since the peritoneal surface may be the only site of metastatic disease (5, 6).

While IPCT improves the outcome of CRC patients it can disturb the healing of anastomosis. This impact increases the risk of anastomotic leakage. It may cause peritoneal spreading and thus can result in low-survival rates. Nevertheless, early postoperative adhesion formation is another issue in these patients, which can reduce the effect of IPCT. They may inhibit the distribution of the antineoplastic agents.
There are many questions requiring clarification on factors affecting anastomosis healing and development of early adhesion formation after IPCT, and there is a need to search for new drugs and application modalities to reduce these important complications. In the pertinent literature, there are a small number of studies investigating the effects of intraperitoneally administed new chemotherapeutic agents on anastomotic healing and on development of early adhesion formation (6, 7).

Cetuximab targets the epidermal growth factor receptor (EGFR) to inhibit its signaling and exhibits anti-tumour effects by binding to EGFR (8, 9). Its efficacy has been shown in the treatment of EGFR-positive metastatic CRC (mCRC) patients (10). It provides clinical benefit either when administered alone or in combination with other drugs in these patients (10, 11). Cetuximab has a merit to be used as a drug for IPCT. We think that it will be useful to evaluate cetuximab in an experimental study for its possible complications related to IPCT.

The main aim of this study was to asses the effect of IP cetuximab administration on the healing of anastomosis and development of early adhesion formation in a rat model.

Twenty-four mature female rats weighing 220 to 270 g. were used. All animals were placed in the laboratory 2 weeks before the study and they were kept under 12 h light/12 h dark conditions at standard temperature (22°C). They were fed laboratory food and tap water ad libitum. This study was performed in the Laboratory of Institute of Experimental Medicine (DETAE), Istanbul University, Istanbul, Turkey. Ethics committee approval was received for this study from the Ethics Committee of Istanbul University Experimental Medicine Research Institute. This study was performed according to the Helsinki Declaration.

Study Design
The rats were randomized into three groups after the performance of colonic anastomosis and received 10 mL of intraperitoneal solution including study drugs after closure of abdominal cavity: normal saline was administered to the normal saline group preoperatively (n=8), postoperative 1 day group (n=8), and peroperative group (n=8). The effect of administration of cetuximab (Erbitux®) (400 mg/m2) intraperitoneally twenty-four hours after surgery (postoperative 1 group) and peroperatively (peroperative group) on the healing of anastomosis and development of early postoperative adhesion formation was assessed. Rats were sacrified on the seventh day after procedure, and then anastomoses and intraabdominal adhesions were examined. Blood, peritoneal fluid, and colonic tissue samples were collected.

Surgical Procedure
Ketamine and xylazine hydrochloride anesthesia (Ketalar; Eczacibasi and Rhompun, Abdi İbrahim, Istanbul, Turkey) was applied to all animals intramuscularly. Laparotomies were performed. The transverse colons were identified, then 1 cm of middle transverse colon was resected standardly, and end-to-end anastomoses were performed. Catheters were fixed through the abdominal wall, and the abdomens were closed continuously. Then, the test materials were given intraperitoneally via the catheter. Normal saline group (n=8) received normal saline, postoperative 1 group (n=8) received cetuximab (400 mg/m2) 1 day after surgery, and peroperative group (n=8) received cetuximab (400 mg/m2) during surgery.

Postoperative Period
The rats were awaken from anesthesia in a cage. Animals were monitored by the same surgeon for the days after surgery to control wound healing. Seven days after surgery, ketamine anesthesia was performed to rats, blood samples were obtained, and they were sacrified with high dose of anesthetic. The laparotomies were done. The peritoneal fluid cytologies were obtained. Several parameters were recorded including; integrity of the anastomosis, the existence of perianastomotic abscesses or peritonitis, and adhesion formation. Two independent supervisors evaluated the results depending on the scale of van der Ham et al. (12) as follows: 0, no adhesions; 1, minimal adhesions; 2, moderate adhesions; and 3, severe and extensive adhesions, including abscess formation.

Anastomosis Bursting Pressure
Following sacrification, a colon segment that included the anastomosis at the center and 2.5 cm of colon on each side was resected along with the adhesions. The colon segment was purified from feces and was ligated. A catheter connected to a sphygmomanometer was inserted into the distal bowel and the proximal site of the bowel was ligated. An isotonic (NaCl 0.09%) solution was infused at a rate of 1 mL/min. The bursting pressure (in mm-Hg) was measured when either saline leakage or gross rupture was observed.

Histopathology
Pathologic specimens of the colon were preserved in phosphate-buffered formalin (10%) and embedded in paraffin. Sections were stained with hematoxylin-eosin. Then, slides were evaluated with binocular optical microscope. All sections were examined by a practicing pathologist who is unaware of the tissue source. Mucosal and muscular continuity, reepithelialization, inflammatory reaction recruitment (polymorphonuclear leukocytes [PMN], macrophages, fibroblasts, and lymphocytes), and neovascularization were graded from 0 to 3 as follows: 1, absent; 2, moderate; and 3, dense. The total score was calculated for histological healing.

Hydroxyproline Tissue Levels
The anastomotic colon segment was frozen with liquid nitrogen and stored at −80°C for hydroxyproline measurements. Estimation of hydroxyproline tissue contents was based on alkaline hydrolysis of the tissue homogenate, and evaluation of free hydroxyproline in hydrolyzates was completed as described by Reddy and Enwemeka (13).

Immuno-histochemical Evaluation
All anastomotic segments were resected for pathologic evaluation at the 7th day and fixed in a 10% neutral formalin solution for 48 hours and then embedded in paraffin. Each section was immunohistochemically stained with VEGF. Phosphate-buffered solution (Sigma Chemical, St Louis, MO, USA) was used for washing all samples. Hydrogen peroxide block solution was used as the blocking solution (Lab Vision, California, USA). Then, VEGF antibody (Quartett, Berlin, Germany) was used for incubating the samples after washing three times with phosphate-buffered solution and a 60-minute incubation with secondary antibody. AEC chromogen (Lab Vision, Fremont, CA, USA) was used for staining the slides. Then, they were rinsed with water and counterstained with hematoxylin.

Statistical Analysis
Qualitative variables were presented as frequencies and percentages. Quantitative variables were summarized by using means with 95% confidence intervals and medians with ranges from minimum to maximum. Kruskal-Wallis test was chosen for comparing the differences among groups, with respect to non-normally distributed parameters, while Mann-Whitney U test was used for pairwise differences. Statistical Package for the Social Sciences 16 software (SPSS Inc; Chicago, IL, USA) was used for conducting the analyses. All reported P values were two-tailed with p<0.05 considered as statistically significant.

The study was completed with a total of 24 rats. No complications occurred in any rats. After sacrificing the rats, the anastomoses were detected to be intact without any evidence of dehiscence, leak, or IP fluid collection. Intraperitoneal fluid sampling was performed for cytology. The presence and status of adhesions were recorded. 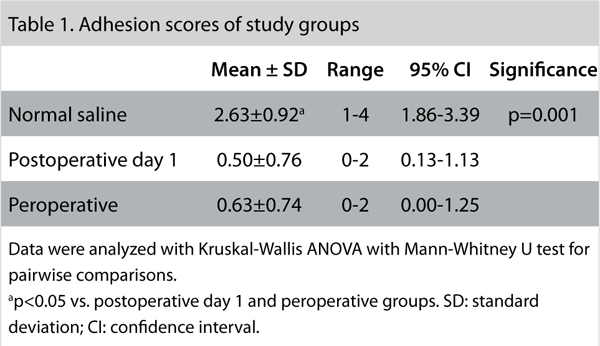 The results of this study indicated that although IP administration of cetuximab reduces adhesion formation it results in impairment of anastomotic healing when administered in the standard dose (400 mg/m2) IP during the operation. However, time of administiration has significance, cetuximab can be administered IP without any additional risk to anastomotic leakage twenty-four hours after the operation.

Cancer that has spread to the peritoneal cavity is known as peritoneal carcinomatosis. It occurs in 10-15% of colorectal cancer patients (2). This situation was corporated with short survival (5, 14). A new treatment strategy combining cytoreductive surgery and IPCT has recently shown promising results. Clinical studies reported that these patients have prolonged survival rates (15-17).

One of the main advantage of IPC is better penetration of chemotherapeutic agents to the tumor nodules where the blood supply is poor (18). Intraperitoneal chemotherapy prevents micrometastases, local recurrence and distant metastases (2, 19). According to this data, IP administration of cytostatic drugs (5-fluorouracil, mitomycin C and oxaliplatin) were used in the postoperative period as an adjuvant therapy. However, there are other new chemotherapeutic agents that are still being investigated.
Cetuximab (Erbitux, Merck, Darmastadt, Germany) pointed out that patients with wild-type Kirsten rat sarcoma viral oncogene homolog (KRAS) colon tumors respond to anti-VEGF agents (20). Other studies verified the safety and efficacy of cetuximab treatment (21, 22).

Unfortunately, after colorectal surgery early postoperative adhesions are observed. The distribution of chemotherapeutic agents can be affected from such situations.

The IP adhesion-reducing effect of IP bevacizumab therapy has been demonstrated in our previous study (7). In this study, we observed that IP cetuximab application reduces early postoperative adhesions in both application types (peroperative and twenty-four hours after the operation). Arıtaş et al. (23) pointed out that there was a correlation between adhesion formation and VEGF expression. Similiarly, we observed that VEGF levels decreased in both application types.

Several surgical complications were reported in the literature. Anastomosis leakage was the most common complication in colorectal surgery. Reported rates of colonic anastomosis leakage vary between 8% and 20% after IPCT (24-26). Averbach et al. (27) pointed out that the incidence of anastomotic leakage after colorectal surgery was 6%. After additional treatment with heated peritoneal chemotherapy, this percentage increased to 20 percent.

This study shows that 24 hours after the operation, IP cetuximab therapy may be a secure additional treatment for metastatic colorectal patients. Considering this as a preliminary study, it may be suggested as a promising candidate for IPCT application. Its long-term effects and related problems should be examined prospectively.