Objective: The aim of this study is to evaluate the effects of sleeve gastrectomy on shoe size one year after the procedure. To our knowledge, no study has yet been conducted addressing this issue.
Material and Methods: Patients who were prepared for sleeve gastrectomy were eligible for the study, and all data and preoperative shoe sizes were recorded in our prospective database. At the 12th month of follow-up, each patient’s excess weight loss % was calculated, and their shoe sizes were recorded by verbal report. Arbitrary or half-size changes were not taken into consideration. The probability of a change in shoe size and the effects of age, sex, preoperative body mass index, and 12th month excess weight loss % on this change were investigated. p<0.05 was regarded as statistically significant.
Results: The subjects of the study were 212 patients who completed their 12-month follow-ups after sleeve gastrectomy between January 2012 and February 2016. The mean shoe size was 41.5; this decreased to 40.5 one year after sleeve gastrectomy (p<0.001). In patients with body mass index (BMI)>50, both the mean decrease (p=0.008) and the percentage of at least two size decreases (p=0.009) were significantly higher than those in patients with BMI<40. Age, sex, and excess weight loss % did not have any significant effects on shoe size.
Conclusion: Sleeve gastrectomy was clearly associated with decrease in shoe size after 12 months. Only preoperative body mass index was found to be directly associated with this decrease.

New evidence strongly suggests that bariatric surgery extends the lifespan of morbidly obese patients; therefore, the number of bariatric operations performed worldwide is increasing (1-7). The introduction of sleeve gastrectomy (SG) to the armamentarium of bariatric surgeons during the last decade probably effected this exponential increase due to its technical ease, physiological nature, and comparable mid-term results (8-10). SG is arguably becoming the new gold standard bariatric procedure, and the demand for this procedure is continually increasing (9, 7). Depending on the definition of “ideal body weight” and the timing of preoperative weight measurement, the expected excess weight loss (EWL) % one year after SG is reported to be between 60 and 100 (8, 11, 12). This considerable reduction in body weight, in addition to increasing life quality and expectancy, is expected to necessitate the purchase of a new wardrobe, as is known by the entire bariatric community. Observational experience also suggests that a decrease in shoe size can occur following a bariatric procedure, although this has never been scientifically investigated.

The main aim of this study is to prospectively evaluate changes in shoe size one year following SG. To our knowledge, our study represents the first report that addresses this issue.

All patients prepared for SG were eligible for the study. The demographics, preoperative and operative data, postoperative complications, and follow-up results of the patients were recorded in our prospective database. Preoperative shoe size and body mass index (BMI, kg/m2) were recorded once the surgery was scheduled. European shoe sizing was used.

All operations were performed by the same team using a standard technique. Briefly, special care was taken to excise the antrum, starting 2 to 3 centimeters from the pylorus; wide excision of the fundus was also enforced. Our procedure also involved purse string inversion of the upper corner and full thickness, as well as continuous suturing of the entire staple line after the 36 F bougie was withdrawn. All patients were seen at the clinic three months and one year after surgery and then at yearly intervals. The 12th month postoperative follow-up visit was the endpoint for this study; the patient’s shoe size and weight in kilograms were recorded again, and the EWL % was calculated. The change in shoe size was established by a direct verbal report obtained from each patient. Half-size or similar arbitrary reductions that did not result in at least one shoe size change were not taken into consideration (i.e., any patient declaring a half-size reduction was recorded as “no change,” a size reduction of 1.5 was recorded as a size change of 1, and a size reduction of 2.5 was recorded as a size change of 2). The EWL % was calculated by accepting the ideal body weight as equivalent to a BMI of 25 Kg/m2.

This study was conducted in accordance with the ethical standards set out in the Helsinki Declaration.

Statistical Analysis
All statistical analysis was performed using the Statistical Package for the Social Sciences software for MacOS X 21 (SPSS Inc.; Chicago, IL, USA). The normal distribution of numeric values was checked with the Kolmogorov-Smirnov test. Numeric variables, such as the difference in shoe size one year after SG, were evaluated by the Wilcoxon test. Decreases in the consecutive BMI and EWL % groups were evaluated by the Kruskal-Wallis test. Shoe size change categories in the consecutive BMI groups and the effects of age and sex on shoe size decrease were evaluated by x2 tests. p values (type one error) smaller than 0.05 were accepted as significant. 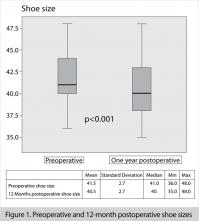 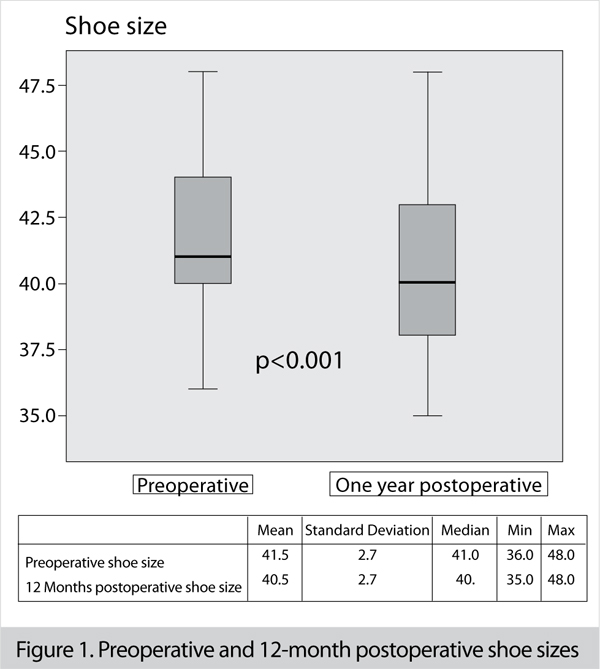 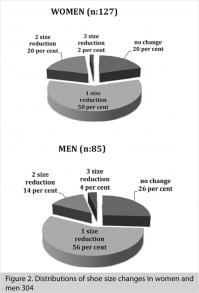 Figure 2. Distributions of shoe size changes in women and men 304
× 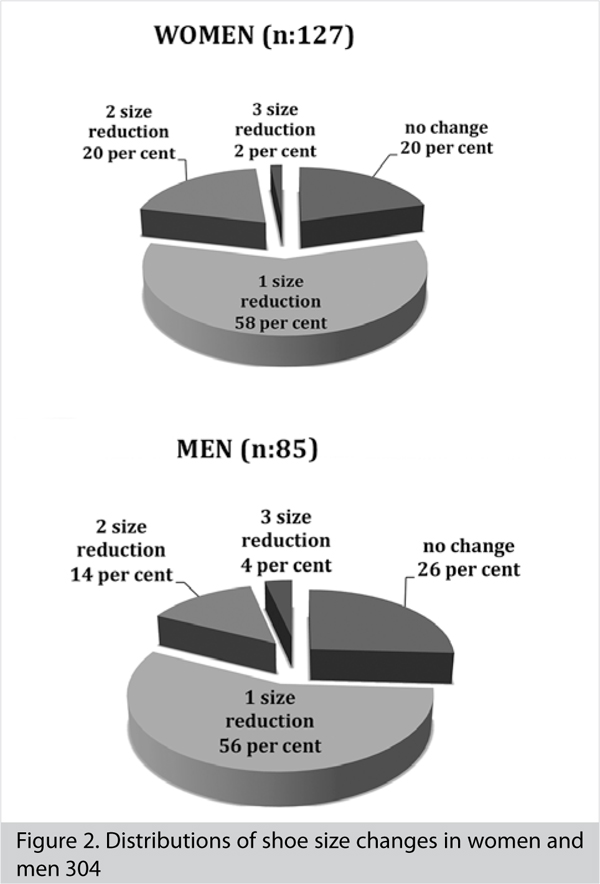 Currently, obesity is a pandemic; morbid obesity, which is also endemic, is the second most common preventable cause of death, only following smoking (13, 14). It is also known that in both men and women, there has been a constant increase in average shoe size, especially during the last five decades; according to the College of Podiatry of the United Kingdom, this phenomenon is thought to be related to the ongoing increase in the obesity pandemic (15).

If becoming obese has an association with an increase in shoe size, hypothetically, the reverse could also be true; also, it is reasonable to assume that weight loss surgery may result in a smaller shoe size. We, as bariatric surgeons, actually observed a relevant trend, which is why we undertook the present study. Our results actually confirm this hypothesis and provide scientific documentation that weight loss surgery achieves a significant decrease in shoe size. Furthermore, this is especially true in super obese patients, further suggesting a direct relationship between obesity and shoe size. One year after SG, 80% of women and 75% of men experienced at least one size decrease compared to their preoperative shoe sizes, which was found to be highly significant (p<0.001, Table 1, Figure 1, 2). It is also noteworthy that almost one fifth of the patients had a decrease of at least two sizes. The extents of decrease in shoe size were similar in both sexes; this is also true for patients older than 40 years of age compared to younger patients. Interestingly, the extent of EWL % one year after SG also had no effect on the decreasing trend; however, this is not surprising. It is known that the EWL % is higher in patients with lower BMI, as these patients have less weight to lose (11). It is also shown in the present study that in this group of patients (BMI <40), the decrease in shoe size is significantly less than in patients with BMI >50.

According to our results, postoperative shoe size decrease is mainly dependent on the patient’s weight before surgery rather than how much of the patient’s excess weight was lost. We are aware of the limitations of verbal reports of shoe size change compared to direct foot size measurements; however, this would be especially true if we wished to show that the patients’ feet decreased in size in accordance with the decrease in shoe size. As our main aim was simply to assess the probability of changes in shoe size, more detailed and complicated measurements of three-dimensional foot size are irrelevant to the present study. Furthermore, as no half-size or arbitrary decreases were taken into account, our reduction rates actually reflected a minimum rate, which is still highly significant when compared to preoperative shoe size.

The mechanics, physics, and chemistry behind the decrease in foot or shoe size are beyond the scope of this article. Decrease in foot adipose tissue, decreased lymphedema, increased venous drainage, and correction of the arch height may all have effects; however, the fact remains that almost 80% of people who undergo SG will buy shoes at least one size smaller one year after SG. Super obesity is associated with significantly higher rates of shoe size decrease compared to lower BMIs, and almost 35% of patients with a BMI>50 will experience at least two size decreases.

Cite this paper as: Şen O, Türkçapar AG, Yerdel MA. The effects of sleeve gastrectomy on shoe size one year after surgery. Turk J Surg 2017; 33: 284-287.
This study was presented at the Bariatric and Metabolic Surgery Congress, 19-22 November 2015, Antalya, Turkey.

Authors declared that the research was conducted according to the principles of the World Medical Association Declaration of Helsinki “Ethical Principles for Medical Research Involving Human Subjects” (amended in October 2013).