Can red cell distribution width be used as a predictor of acute cholecystitis?

Acute cholecystitis (AC) is among the most common reasons of acute abdomen presenting to emergency departments and is commonly related to the obstruction of the cystic duct mainly with gallstones. The prevalence of cholelithiasis is reported as 10-15%, and approximately 35% of these patients develop complications or recurrent symptoms in their lifetime (1, 2). Although more than 70% of patients with acute cholecystitis respond to medical treatment within the first 24-48 hours, laparoscopic cholecystectomy (LC) is the definitive treatment of symptomatic cholelithiasis and its complications. Early LC has been reported to have lower complication rates than open cholecystectomy (OC) (3). Although the timing of LC remains controversial, early LC is recommended for reduction of complication rate and length of hospital stay (4-7). Early diagnosis of acute cholecystitis is necessary for the decision of surgery.

The diagnosis of AC is based on severe abdominal pain at the right upper abdominal quadrant and localized tenderness (with or without a positive Murphy’s sign) together with vomiting, fever and leukocytosis (8). Ultrasound findings support acute cholecystitis (9, 10). Diagnosis of AC can also be confirmed by pathology findings.

The laboratory tests can be easily performed and facilitate AC diagnosis, which include; complete blood count (CBC), C-Reactive protein (CRP) and liver function tests. CBC includes leukocyte, erythrocyte and thrombocyte counts and also morphological features such as red cell distribution width (RDW). Red cell distribution width level has been reported to be a predictor of diseases such as coronary artery disease, inflammatory bowel disease, celiac disease and pulmonary embolism, and has been reported to be valuable in diagnosis of diseases such as acute pancreatitis, bacteremia, sepsis, and septic shock (11, 15-17). However, the role of RDW in diagnosis of AC remains unclear. The aim of this study was to investigate the role of RDW in AC.

Laboratory Tests
Leukocyte counts were obtained by an electronic cell counter (Advia 2120i; Hematology System with Autoslide, Siemens, Erlangen, Germany). Serum CRP levels were measured by spectrophotometric methods (Cobas Integra 800; Roche, Mannheim, Germany). The normal range of RDW level in our laboratory was 11.3-15.2%, that of leukocyte count was 4 and 11.5x103/µL, and that of CRP level was 0-6 mg/L.

Statistical Analysis
Statistical Package for the Social Sciences software package was used for statistical analysis (version 17.0, SPSS Inc.; Chicago, IL, USA). If continuous variables were normal, they were presented as mean±standard deviation (p>0.05 in Kolmogorov-Smirnov test or Shapira-Wilk (n<30)), and if the continuous variables were not normal, they were presented as median values. Comparisons between groups were applied using one-way Student T test and One Way ANOVA for normally distributed data. Values of p < 0.05 were considered statistically significant.

Table 1. Comparison of the demographic features and White blood cell count, CRP, and RDW levels of the subjects in acute and chronic cholecystitis groups 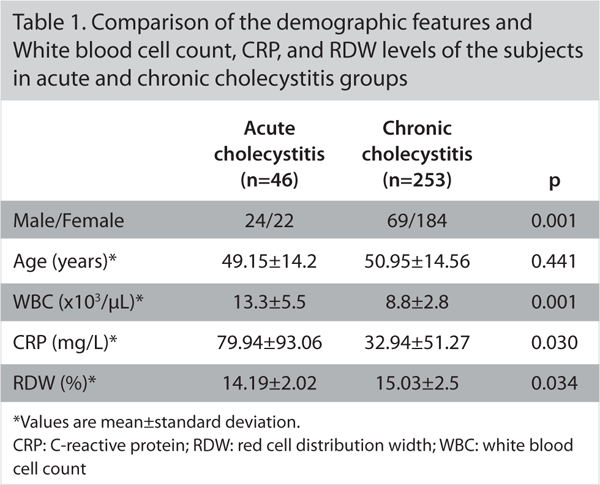 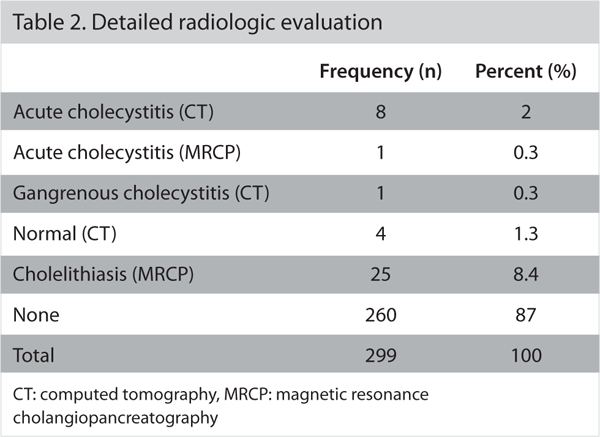 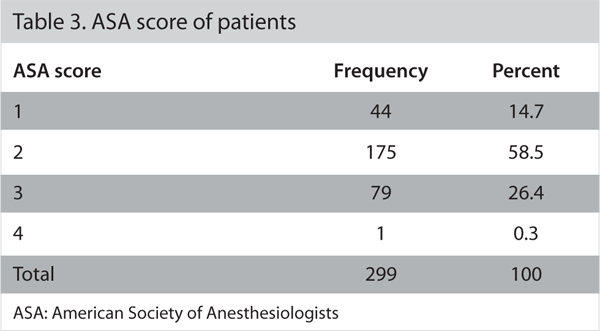 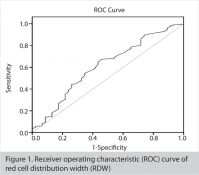 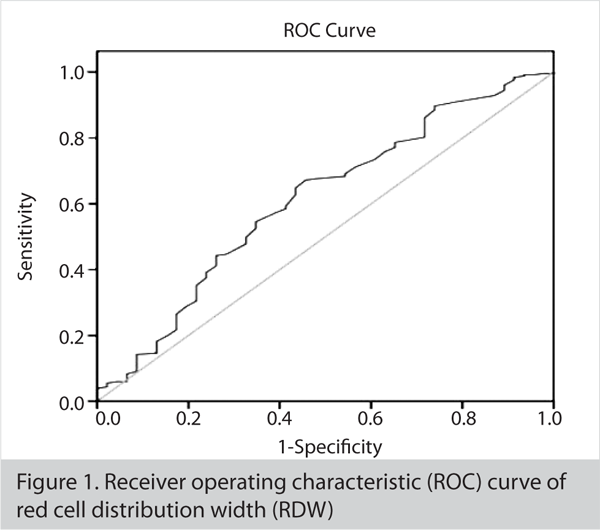 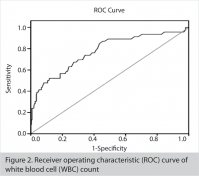 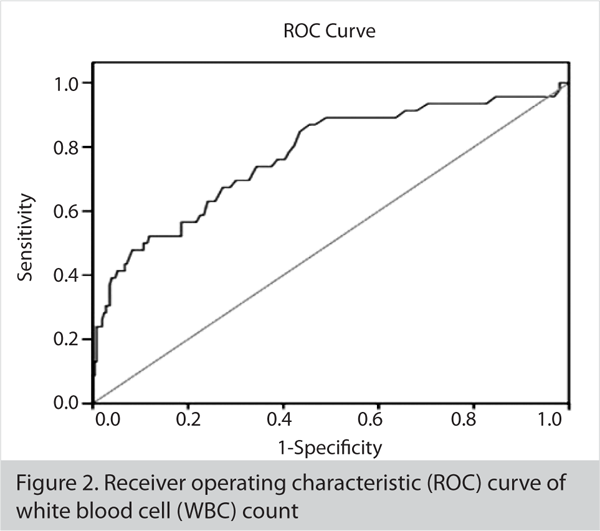 Acute cholecystitis (AC) is among the most common reasons of acute abdomen presenting to emergency departments. Early diagnosis is essential for the decision of cholecystectomy timing. Early cholecystectomy, especially within 72 hours of admission, is recommended in order to decrease the complication rate and length of hospital stay (4-7). In a large randomized trial, Gutt et al. (18) showed that laparoscopic cholecystectomy was superior to conservative approach in terms of morbidity and cost. Therefore, early diagnosis and surgical decision making are crucial steps in the management of AC.

Elevated white blood cell count and CRP levels are common laboratory tests used in the diagnosis of AC. In our study, WBC count was found to be significantly high in the AC group, in parallel with previous reports (7, 19). The mean WBC count in our study was 13.3±5.5 x103/µL. Wevers et al. (19) determined the mean WBC count as 12.6-13.1 x103/µL. This elevated value may be due to high patient population presenting with severe cholecystitis. Although they did not report the exact WBC count in their series, Oymaci et al. (7) defined leukocytosis as WBC count higher than 10 x103/µL and 70-73% of their patients had leukocytosis. Nikfarjam et al. (20) found median WBC count as 11.7 x103/µL. In our study, the median WBC count was 12.5 x103/µL that is higher than that reported in the literature.

C-reactive protein level was also found to be elevated in AC, especially to very high values when gangrenous cholecystitis is present and Crp level is alsocorrelated with conversion to open cholecystectomy (19-21). In our study, the mean CRP level was 79.94±93.06 mg/L in the AC group and was statistically significant as compared to the CC group (p=0.030).

We aimed to seek another laboratory test that may aid in differentiating AC from CC. Red cell distribution width is a marker used in the differential diagnosis of microcytic anemia, thalassemia and hemoglobinopathies, while it can also reflect an inflammation (12, 22). Increased RDW levels are detected in cases of red blood cell production or degradation impairment (12). Higher RDW levels were found to be associated with worse clinical outcomes in patients with heart failure, coronary artery disease, pulmonary hypertension, diabetes mellitus, and stroke (13-15, 22-24). Pro-inflammatory cytokines of sepsis influence the half-life of circulating erythrocytes, damage their membranes and suppress maturation, lead to introduction of larger and newer reticulocytes to systemic circulation thus increasing the RDW. In addition, high oxidative stress can also reduce erythrocyte lifetime and increase the release of premature red blood cells into the blood stream. Sadaka et al. (25) demonstrated RDW to be associated with mortality and morbidity on the first day of septic shock. Meynaar et al. (26) showed that RDW level on Intensive Care Unit (ICU) admission was an independent predictor of mortality, but the mechanism of this association needs to be further investigated. Senol et al. (17) demonstrated that increased RDW-level on admission is an independent risk factor of mortality in patients with acute pancreatitis. Jo et al. (16) observed that RDW is associated with early mortality in severe sepsis and septic shock. the median RDW-level was similar in the non-survivor groups of both studies (16, 17). Increased RDW-level has been shown to be associated with elevated CRP, erythrocyte sedimentation rate, and interleukin-6 levels (22, 25, 27). Narci et al. (28) determined decreased RDW level in patients with acute appendicitis with a sensitivity and specificity of 47% and 67%, respectively. However, the difference was so slight that it was concluded that RDW could not be used in diagnostic testing. Yao et al. (29) also found a significant association between RDW and mortality in acute pancreatitis, and the sensitivity and specificity of RDW level to predict mortality were identified as 75% and 89.8%, respectively. In the literature, there are several studies evaluating the association between RDW level and acute pancreatitis or acute appendicitis, but no study was found to evaluate acute cholecystitis. Our study was designed to assess the correlation of acute cholecystitis and RDW level. We observed significant difference between RDW level and acute cholecystitis and mean RDW level was lower in AC group but still in normal range. We determined the sensitivity and specificity of RDW level in the diagnosis of AC as 64.8% and 56.5%, respectively.

We want to emphasize that mean RDW level in the CC group was 15.03%, which is close to the upper range of normal RDW level. The retrospective design of our study is one of its limitations. In addition, our control group consisted of patients with chronic cholecystitis, comparison versus the normal population without any inflammatory process may have yielded better results.

Ethics committee approval was received for this study from the ethics committee of Başkent University Institutional Review Board (Project No: KA14/258).

Informed consent was not received due to the retrospective nature of the study.