Course of sepsis in rats with thyroid dysfunction

Objective: Numerous studies show the relationship between sepsis and thyroid hormones. Virtually all these studies investigate changes in post-sepsis thyroid hormones and the relationship between these changes and the progression of the disease. Our aim in this study was to investigate the progression of sepsis in rats with thyroid dysfunction.
Material and Methods: The study involved four groups, each containing seven female Wistar albino rats: Group 1: Sham, Group 2: Control (Sepsis), Group 3: Hyperthyroidism-Sepsis, and Group 4: Hypothyroidism-Sepsis. Group 1 only received laparotomy. Group 2 only had sepsis. Sepsis was induced in Group 3 and Group 4 following formation of hyperthyroidism and hypothyroidism, respectively. After 24 hours, relaparotomy and thoracotomy were performed, and tissue and blood samples were drawn.
Results: Dysfunctions seen in the liver, lungs, and kidneys during sepsis and other findings of sepsis were milder in the hyperthyroidism group in comparison to both the control and hypothyroidism groups.
Conclusion: The results of Simon’s grade, histopathological organ damage, and laboratory parameters revealed that the progression of sepsis was milder in the hyperthyroid group than in the hypothyroid and euthyroid groups. The progression in the hypothyroid group was the most severe. Therefore, the results of the study raise the question of whether immediate treatment in cases of hypothyroidism and slow return of thyroid function to normal levels in cases of hyperthyroidism are adequate treatment approaches in patients who may develop sepsis or septic shock.” To determine the answer to this question, more detailed studies are required with a higher number of subjects.

Critical diseases cause hormonal changes that may vary during the acute and chronic phases of the disease (1). Changes are also seen during disease along the hypothalamic-pituitary-thyroid (HPT) axis. These changes are typically related to a decrease in the total 3, 5, 3’-L-triiodothyronine (T3) level. The term non-thyroidal illness syndrome (NTIS) is used to describe the changes in thyroid-related hormone levels during acute or chronic illness (2). Decrease in T3 is the most common finding in NTIS. The only finding may be decreased T3 levels in diseases with relatively mild progression. As the severity of disease increases, decreases in 3, 5, 3’-L-tetraiodothyronine (T4) and thyroid stimulant hormone (TSH) levels along with T3 and elevation of reverse T3 level are seen (3). Some studies have linked this change in thyroid hormones during sepsis and septic shock with poor prognosis (4). Studies demonstrating the relationship between relative hypothyroidism and poor prognosis have focused on thyroid hormone treatment during sepsis.

Numerous studies in the literature show a relationship between sepsis and thyroid hormones. Virtually all these studies investigated changes in post-sepsis thyroid hormones and the relationship between these changes and the progression of the disease. However, in this study, we aimed to investigate the progression of sepsis in rats with previous conditions of hyperthyroidism or hypothyroidism.

Twenty-eight female Wistar albino rats weighing 260 to 320 grams were used in the study. Four groups, each containing seven animals, were formed. Group 1 was designated as the sham group, while Group 2 was the control sepsis group, Group 3 was the hyperthyroidism + sepsis group, and Group 4 was the hypothyroidism + sepsis group. All animals were fed with standard feed and water for 15 days. Before the experiment, the rats were housed in wire cages at a temperature of 22°C and 50% to 60% humidity with 12 hours night, 12 hours day circadian rhythms. A maximum of five rats were housed in a single cage. Solid foods were removed from the rats’ diet 12 hours before surgical procedures, and water was removed 2 hours prior to surgery. The rats in Group 3 were administered a daily dose of 250 μg/kg L-thyroxine (Sigma) dissolved in 0.1 N NaOH and diluted with normal saline intraperitoneally (i.p.) for 15 days; thus, hyperthyroidism was established (5). The animals in Group 4 were i.p. injected with 0.5 ml 6-n-propyl-2-thiouracil (Sigma) dissolved in isotonic solution for 15 days at a daily dose of 10 mg/kg (6). Before the surgical procedures, all animals were anesthetized with 50 mg/kg ketamine HCl and 15 mg/kg xylazine subcutaneously. Following anesthesia, at the end of the 15th day, all the rats underwent mini-laparotomy operations with a midline incision. The rats in the sham group did not undergo further procedures; their abdomens were closed in two layers with 4/0 silk after their cecae were isolated. Experimental sepsis formed in the other groups (groups 2, 3, and 4) in line with the cecal ligation and perforation (CLP) model (7) (Figure 1). To achieve this, the cecum was isolated; after the visible colon was patted and filled with feces, it was ligated with 3/0 silk below the iliocecal valve; the cecum was perforated with an 18-gauge branule needle, and the abdomen was continuously closed in two layers with 4/0 silk. After the procedure, a 2 mg/mL dose of paracetamol tablets was mixed in drinking water to provide analgesia. At the end of 24 hours, anesthesia was performed in the same way; all rats underwent relaparatomy and thoracotomy, and intraabdominal inflammation was graded according to Simon’s method (8) (Table 1). Intracardiac blood was drawn for biochemical and hormonal analyses. Tissue samples from the liver, lungs, and kidneys were acquired for pathological diagnoses. The animals were euthanized under anesthesia by exsanguination. 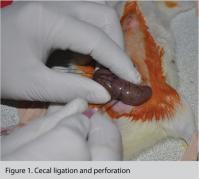 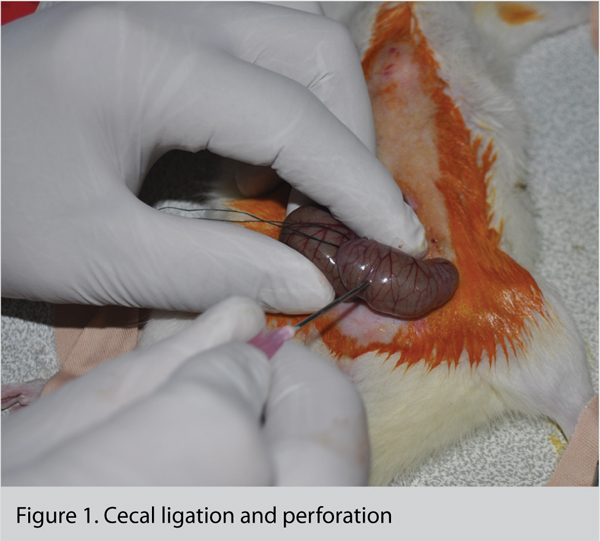 Table 1. Classification of peritoneal inflammation according to Simon’s method 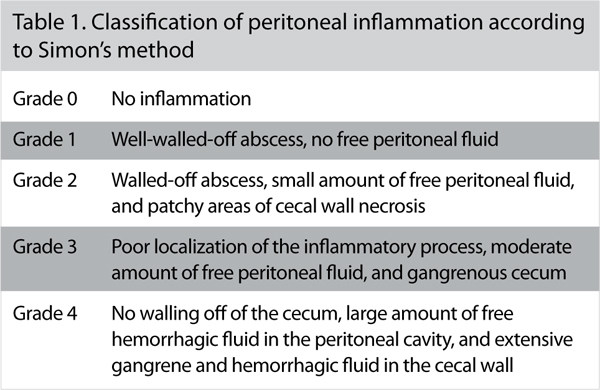 Statistical Analysis
The statistical analysis of the collected data was conducted using the Statistical Package for the Social Sciences (IBM Corp.; Armonk, NY, USA) 20.0 software package. When parametric conditions were met for intergroup comparisons, one-way analysis of variance (ANOVA) was used, while Kruskal-Wallis variance analysis was implemented for other cases. For binary comparisons, the post-hoc Tukey test was preferred. For the comparison of two groups, Student’s t-test or the Mann-Whitney U test was used. To determine whether categorical variables were related, chi-square analysis was used; to pinpoint the relationships between numeric variables, Pearson’s and Spearman’s correlation tests were used. P<0.05 was regarded to be statistically significant for all analyses.

One rat from the hypothyroidism group died 18 hours after implementation of the sepsis model in the course of the study. This rat underwent relaparotomy and thoracotomy immediately after mortality. Following the grading of intraabdominal sepsis according to Simon’s method, tissue samples were taken. Because no blood samples could be drawn from this rat, the laboratory parameters were evaluated over six rats in this group.
24 hours after completion of the CLP procedure, it was seen that clinical findings such as coarsening of the hair, slower motion, reluctance to feed, and somnolence became more prominent, especially in the hypothyroidism and control sepsis groups.

With respect to Simon’s grade, the hyperthyroidism group had a more moderate outlook than the control sepsis group. The results of the hypothyroidism group, however, were poorer than those of the other three groups (Table 2, Figure 2). Among the clinical parameters, Simon’s grade had negative correlations with fT3 (p=0.029) and fT4 (p=0.004); however, no correlations were seen with regard to TSH level (p=0.268). 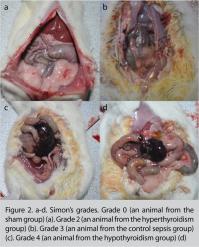 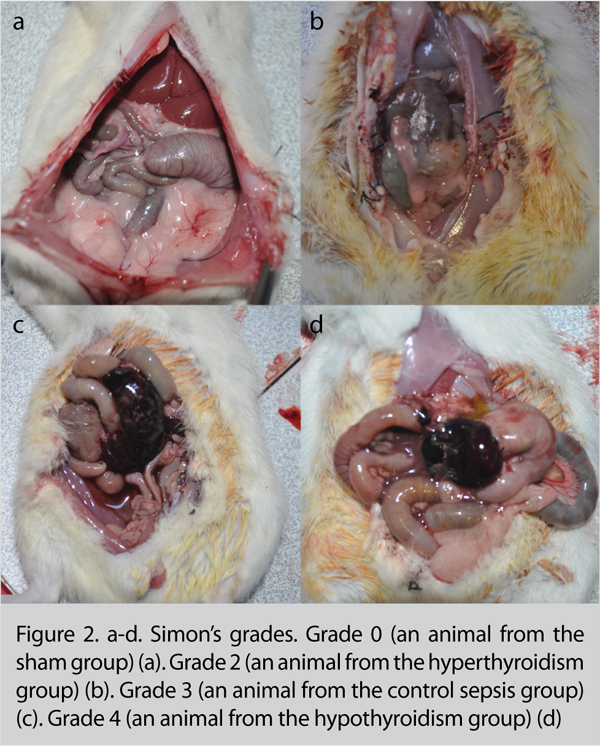 Table 2. The distribution of Simon’s grades according to the groups 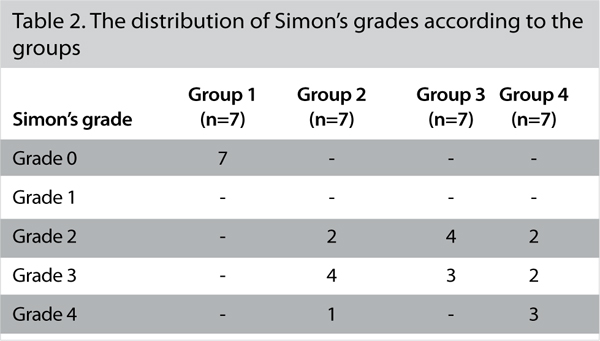 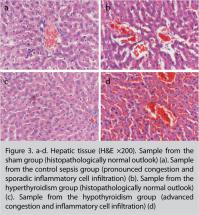 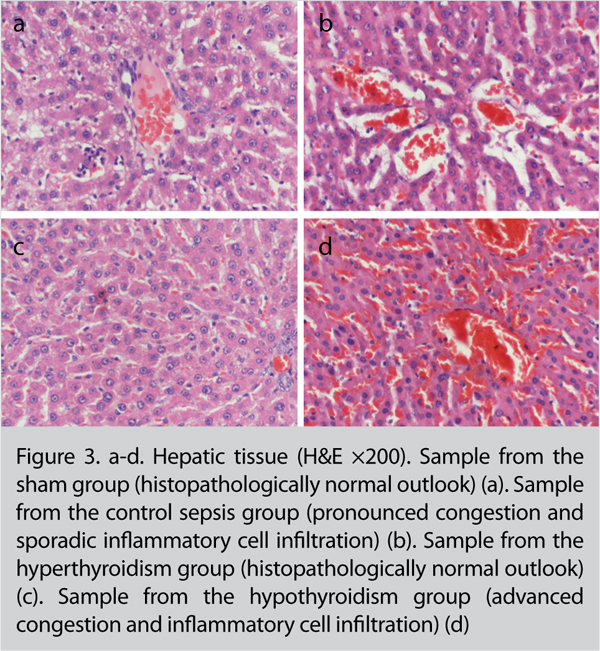 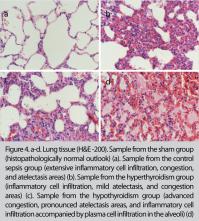 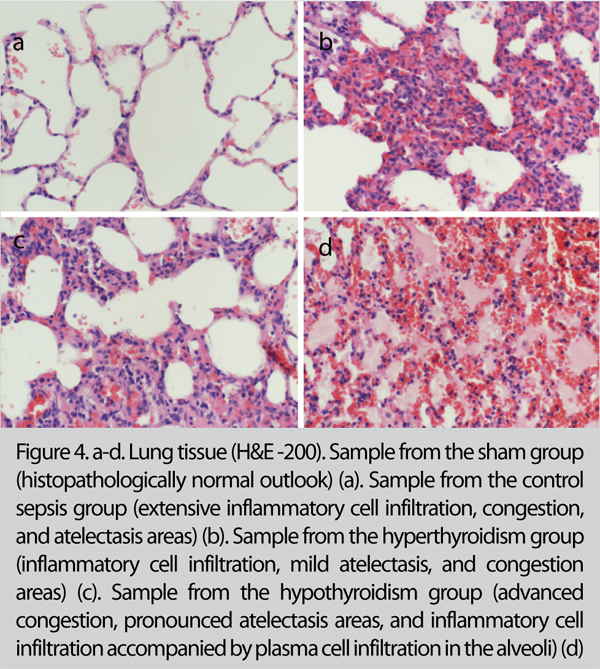 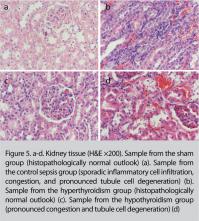 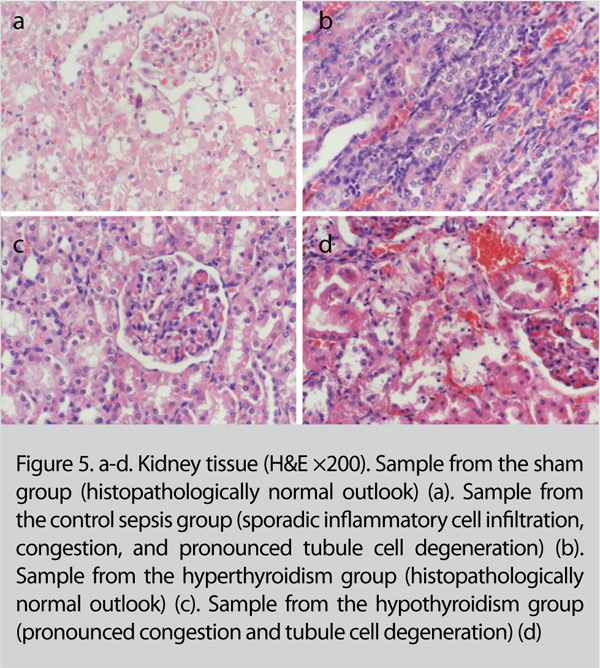 Table 4. Histopathological findings in the liver, lung and kidney 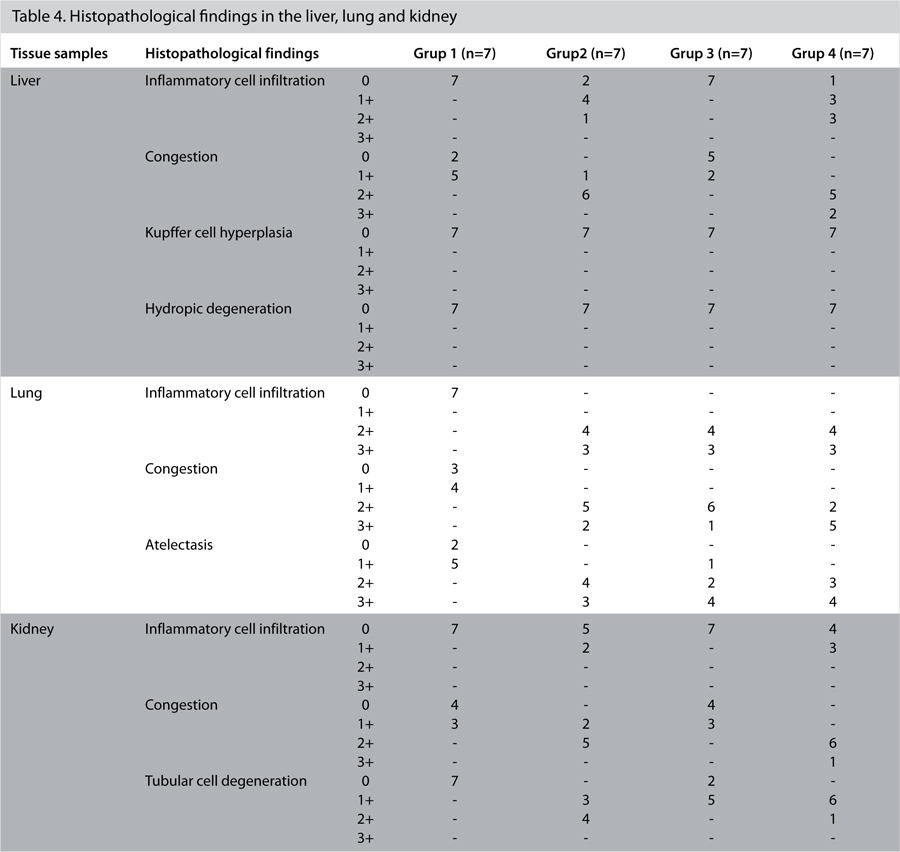 Sepsis is described as a systemic disease condition brought about by microbial invasion of normally sterile areas of the body. Sepsis conditions accompanied by hypoperfusion and at least one organ dysfunction are called severe sepsis; if vasopressor need or hypotension, which are seen during adequate fluid resuscitation, is added to severe sepsis, it is called septic shock (9). The results of our study showed that the disease was less severe in the hyperthyroidism group than in both the hypothyroidism and the control sepsis groups. Moreover, not only laboratory parameters, but also histopathological symptoms referring to liver, lung, and kidney damage were better in the hyperthyroidism group than in either the control sepsis or hypothyroidism groups.

Among the inflammatory molecules secreted by the host and used for the diagnosis of infection, the presence of bacteremia, and the progress and mortality of disease are TNF-α, IL 6, CRP, and procalcitonin, which is recently being used more frequently (10). Thyroid hormones are a point of interest in this regard. Decrease in T3 is the most frequently seen finding; it may be the only finding in T3 in diseases with milder progression. As the severity of the disease increases, T4 and TSH levels decrease along with T3, and an increase in reverse T3 level is observed (3). In our study, we concluded that fT3 and fT4 levels were lowest in the hypothyroidism group, followed by the control sepsis, hyperthyroidism, and sham groups. In contrast, the TSH level was significantly higher in the hypothyroidism group. This situation was related to the anti-thyroid treatment administered before the CLP procedure.

Recent studies have argued that low thyroid hormone levels are signifiers of poor outcomes in sepsis (11). The results of a review study conducted by Angelousi et al. (4), which examined nine studies on the subject, revealed that six of nine studies demonstrated significantly lower total or free T3 and T4 levels in deteriorating septic patients than in other patients. In another study by Sharma et al. (12) investigating the relationship between thyroid hormone dysfunction and CRP levels during sepsis in newborns, the authors demonstrated a close relationship between low fT3 level and high CRP level. Furthermore, Wang et al. (13) proved that fT3 was related to intensive care mortality in a prospective study that compared intensive care mortality and thyroid function. Numerous studies have been conducted, in addition to those mentioned above, on the relationship between thyroid hormones and the progression of sepsis. These studies reveal conflicting results regarding whether changes in thyroid hormones are related to the progression of sepsis, whether these changes are signifiers of mortality, and which thyroid hormones are better signifiers. The main cause of these inconsistencies is that almost all these studies were observational ones conducted with adult or pediatric intensive care patients. Therefore, it is not known whether the patients in the studies had previous conditions of underlying thyroid disease. Most drugs used in intensive care (such as dopaminergic agents) may lead to thyroid dysfunction; some studies did not exclude patients receiving these drugs. Most of the patients had comorbid diseases that could affect thyroid functions; these patients were not excluded in some studies. In contrast, in our study, we addressed the problems that limit the dependability of some previous studies; also, the relationship between thyroid hormone levels and the progression of sepsis was evaluated in a reliable manner. According to the data we collected, there were negative correlations between the clinical phase of the disease and fT3 (p=0.029) and fT4 (p=0.004) levels; however, no correlations were seen with regard to TSH level (p=0.268). There was a negative correlation between hepatic and renal failure and fT3 level (p<0.005). In light of these data, it was concluded that fT3 is a more valuable parameter in demonstrating damage, especially histopathological damage.

Simon’s grade, histopathological organ damage, and laboratory parameter results revealed that progression of sepsis was less severe in the hyperthyroid group than in the hypothyroid and euthyroid groups. The progression of sepsis was most severe in the hypothyroid group. Therefore, the results of this study raise the question of whether immediate treatment in cases of hypothyroidism and slow return of thyroid function to normal levels in cases of hyperthyroidism are adequate treatment approaches in patients who may develop sepsis or septic shock.” To determine the answer to this question, more detailed studies with a higher number of subjects are necessary.

This study was presented at the 50th Congress of the European Society for Surgical Research, 10-13 June 2015, Liverpool, UK.

Ethics committee approval was received for this study from the ethics committee of Necmettin Erbakan University KONUDAM Experimental Medicine Research and Study Center’s (date: 11.14.2014/decision no: 2014-056).

Not required in this study.