Objective: Neutrophil-lymphocyte ratio still has a limited clinical use due to many non-cancer factors affecting neutrophils or lymphocytes in the present time. We aimed to evaluate the association between preoperative neutrophil-lymphocyte ratio and poor prognostic factors after curative elective colorectal surgery.
Material and Methods: This clinical retrospective study was initiated with 95 patients, who had a curative surgical resection between 2003 and 2013. The patients were divided into two groups based on the preoperative neutrophil-lymphocyte ratio cut-off value above and below 3. The groups were compared for tumor localization, diameter, and staging; the histopathological perineural invasion; lymphovascular invasion; and overall survival. Univariate and multivariate Cox regression analyses were used to determine the role of neutrophil-lymphocyte ratio after stratification by several clinicopathological factors.
Results: The mean age of patients was 59.79±1.48 (range, 23-90) years, and median follow-up period was 20.77±14.85 months. There was no significant difference in perineural or lymphovascular invasion, tumor size, stage, age, sex, and tumor location between the groups [Group 1 ratio >3 (n=52) and Group 2 ratio ≤3(n=43)]. Hemoglobin (p=0.035) and albumin levels (p=0.004) were lower in the Group 1. When the stage increased, differences between the rectal cancer groups were found. Overall survival was significantly lower in the Group 1 (p=0.013).
Conclusions: The study showed that a high neutrophil-lymphocyte ratio had an adverse effect on overall survival in colorectal cancer patients who had a curative surgery. However, we could not establish any association between neutrophil-lymphocyte ratio and the factors such lymphovascular invasion, perineural invasion, tumor size expect hemoglobin and serum albumin levels.

Colorectal cancer is the third most common malignancy worldwide. The number of deaths from colorectal cancer is 15.9 per 100,000 individuals per year. Approximately 4.7% of men and women are diagnosed with colon and rectal cancer at some point during their lifetime (1). Estimated preoperative prognosis for colorectal cancer patients will help the choice and modality of the surgical and medical treatment.

An improved lifespan has been shown with an intensive lymphocytic infiltration in localized tumors in the colorectal cancer patients (2-4). Additionally, some parameters, such as C-reactive protein and hypoalbuminemia, which show a poor prognostic association between systemic inflammatory response and colorectal cancer have been discussed (5, 6). Systemic inflammation has been reported to be an independent determining factor for prognosis in colorectal patients after surgery (5). A high neutrophil-lymphocyte ratio (NLR) has been reported to estimate poor outcomes in colorectal cancer patients who are exposed to primary resection (7). Ding (8) reported that a high NLR may establish the risk groups and in such patients NLR may be a marker in response at adjuvant cancer therapy.

Considering the histopathology of colorectal diseases, it is known that lymphovascular and perineural invasion have an adverse effect on prognosis. The most important prognostic variable in colorectal carcinoma is the presence or absence of lymph node metastases. In a study of more than 1000 operative specimens, Morson and Dawson (9) found regional venous involvement in 35% of cases. Submucosal venous spread occurred in 10% of cases, and there was an evidence of permeation of extramural vessels in 25% cases. In the former cases, there was little or no effect on prognosis; however, extramural venous involvement reduced five-year survival rates from 55% to approximately 30%.

The present study has aimed to evaluate the association between NLR levels and prognostic factors in colorectal cancer patients who have a curative elective surgical resection.

The patients for whom file data could not be completely accessed, who could not be followed up, who did not have detailed pathological examinations, who underwent an urgent surgery (due to perforation or obstruction), who had preoperative infections, who had a history of hematological disease or chronic inflammatory diseases, who received preoperative chemotherapy, and who had distant metastases were excluded.

Based on these criteria, among 268 patients who underwent colorectal cancer surgery, we included 95 patients who were diagnosed with adenocarcinoma and had only a curative surgery.

Patients’ age, gender, tumor localization, tumor diameter, tumor classification, staging, presence or absence of a histopathological perineural, and lymphovascular invasion were recorded. The evaluation of vascular invasion was based on whether there was extramural involvement. Any pathological grading system was not used for the determination of perineural invasion. The lifetime data of the patients were collected using the hospital and the national databases.

From laboratory tests studied within last one week before surgery, the levels of neutrophils, lymphocytes, hemoglobin, and albumin were recorded. NLR was calculated. The values with the highest sensitivity and specificity were analyzed for NLR cut-off value based on cut-off values established according to the ROC curve analyses in some previous studies with a large number of patients (14, 15). The patients were divided into two groups based on an NLR cut-off value of three. Clinical-pathological characteristics and overall survival (OS) were compared between two groups.

Statistical Analysis
Descriptive analyses were conducted for the demographic parameters. Clinical-pathological characteristics between the groups were analyzed using Mann-Whitney U test and chi-square test, which are non-parametric tests. The survival was analyzed using Kaplan-Meier survival analysis. Univariate and multivariate survival analyses were made for the association between NLR and clinical and pathological parameters in OS. The Statistical Package for the Social Sciences 22.0 for system (IBM Corp.; Armonk, NY, USA) was used as statistical program. 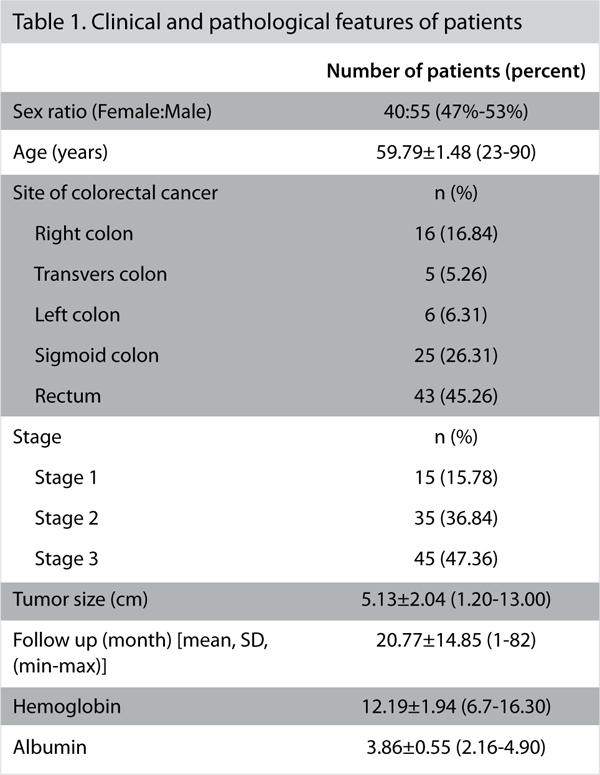 The groups were based on NLR>3 (n=52) and NLR≤3 (n=43). Table 2 compares the clinicopathological characteristics between the groups. There was no difference in the age and sex distribution between the groups. There was a difference between the groups according to the localization of the colon and rectum, but it was not statistically significant (p=0.060). The proportion of colon/rectum patients was 33/19 in Group 1 and 19/24 in Group 2. Therefore, the colon and rectum cases were evaluated separately according to the stage. There were differences in stage 2 colon cancer between the colon groups. However, this situation did not reflect in stage 3 colon cancer. There were differences between the groups with regard to the stage 2 and 3 rectal cancer. This situation suggested that a high NLR is important in intermediate stage rectal cancer.

Table 2. The features of patients with high and low NLRs

No significant difference was noted between NLR level and perineural or lymphovascular invasion. Lower hemoglobin and albumin levels in the high-NLR group were the only differences.
For all patients, the two-year and the five-year OS were 75.6% and 66.0%, respectively. As of August 2014, 18 and six patients died in high-NLR and low-NLR groups, respectively. Figure 1 presents the OS graph of the groups. High NLR was related with significantly poor OS outcomes (Log-rank test, p=0.013). 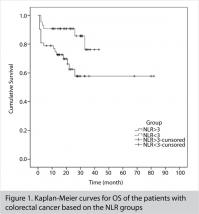 Figure 1. Kaplan-Meier curves for OS of the patients with colorectal cancer based on the NLR groups
× 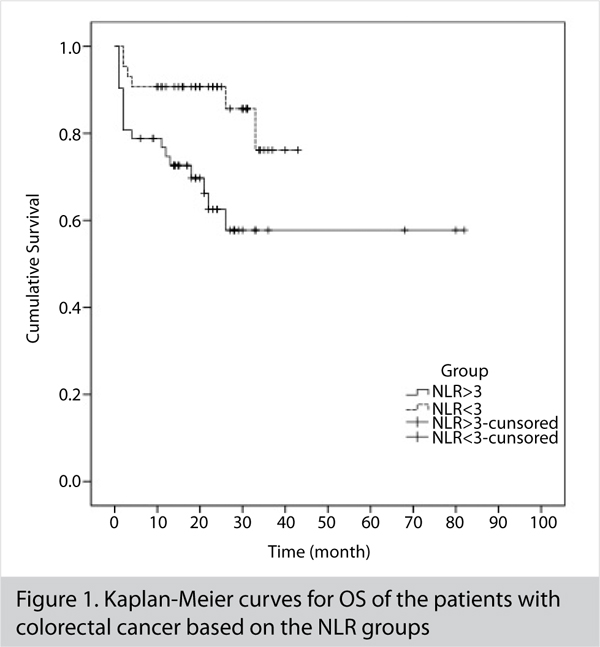 To investigate whether NLR was associated with clinical and pathological outcomes, univariate and multivariate survival analyses for OS was performed.

Table 3. Univariate and multivariate analyses of clinicopathological parameters for the prediction of OS in the patients with colorectal cancer 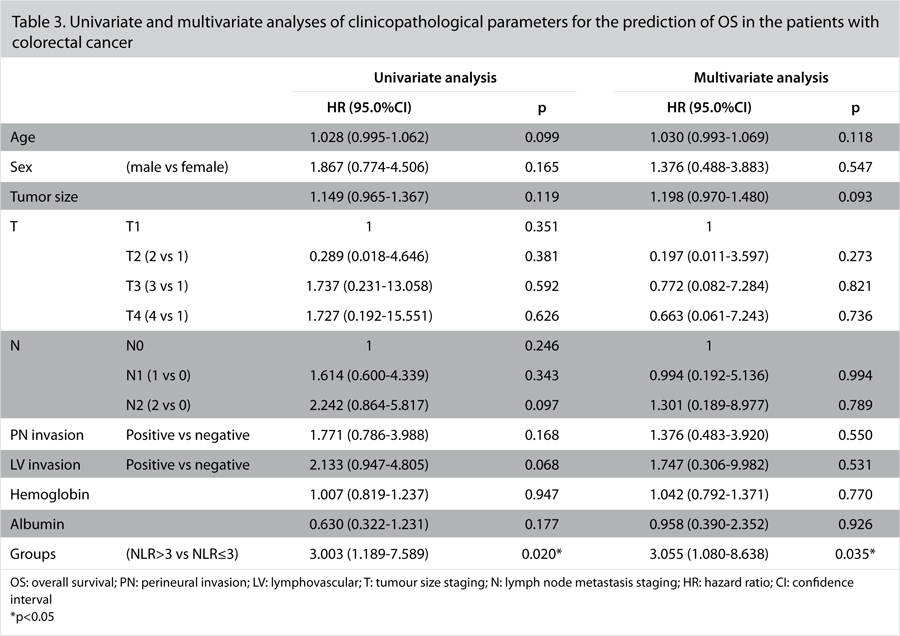 Colorectal cancers have an important role in deaths from cancer worldwide. Local recurrence and distant metastases may occur in the advanced periods even in patients who have undergone curative resection. High preoperative NLR is associated with poor prognostic factors in colorectal cancer (16).

The study by Roxburgh suggested that low peritumoral infiltration and increased systemic inflammation were linked via the cell-mediated immune system. Both the pathologic and the biochemical measures of the inflammatory response predicted the survival after colorectal cancer surgery (17). In a study of 374 patients (229 with negative node disease) who underwent a surgery between 1986 and 1996, the systemic inflammatory response measured by Glasgow prognostic score (mGPS) criteria was neither associated with Dukes stage nor with peritumoral infiltration, but was associated with an increased number of circulating total white blood cells and neutrophils and a decreased number of circulating lymphocytes. mGPS was also independently associated with cancer-specific survival in patients potentially undergoing a curative resection for colorectal cancer (18).

This present study evaluated several clinical and pathological characteristics including perineural and lymphovascular invasion, but could not establish a significant correlation between NLR and such parameters. Only hemoglobin and albumin levels were significantly lower in the high NLR group.

This study showed that high NLR significantly affected OS. However, no significant correlation was established between NLR and perineural and lymphovascular invasion, which are known to be poor prognostic factors. It may also be affected by the exclusion of the stage 4 patients, receiving neoadjuvant chemoradiotherapy based on evaluation of the association between NLR and perineural-lymphovascular invasion. This is due to the fact that such invasions are more frequent in advanced stage patients.

Ozdemir et al. (19) in their study, found by the univariate analysis that there is a correlation between high NLR and pathologic nodal stage of bad OS. However, in our study, there was no statistical correlation established by univariate and multivariate analysis between groups in terms of lymphovascular invasion and TNM stage. A reason of this difference may be the exclusion of study of metastatic patients.

Intratumoral immun T cell densities on the colon or the rectum are especially associated with tumor enlargement and metastasis (20). There is a significant difference in the advanced rectum cancer groups. As in many studies, we did not divided the colon and rectal tumor patients in this study. Moreover, there was no significant difference in tumor localizations. However, increasing the number of cases due to the distinction between the colon and the rectal tumors may have different consequences.

Although NLR test has advantages such as being simple and affordable and the ability to study among routine tests, it may be affected by several external factors. Non-randomization and the reduced number of patients were disadvantages of this study.

If the study’s design had been prospective, the standardization of preoperative whole blood count and evaluation of specimens by the same pathologists might have affected the results.
Neutrophil-lymphocyte ratio may have a sufficient prognostic value alone when evaluated together with the literature. However, it still has limited clinical use due to many non-carcinogenic and carcinogenic factors affecting neutrophil and lymphocyte counts in daily use.

We think that this matter will be clarified with more detailed meta-analyses in large-scale studies.

The study showed that high NLR has an adverse effect on the OS in patients who have undergone a curative surgery. However, we could not establish any association between NLR and the factors such lymphovascular invasion, perineural invasion, and tumor size, except hemoglobin and serum albumin levels.

Informed consent was not received due to the retrospective nature of the study.