Is it possible to reduce the surgical mortality and morbidity of peptic ulcer perforations?

Objective: Peptic ulcer perforation is a life-threatening situation requiring urgent surgical treatment. A novel vision in peptic ulcer perforation is necessary to fill the gaps created by antiulcer medication, aging of the patients, and presentation of resistant cases in our era. In this study, we aimed to share our findings regarding the effects of various risk factors and operative techniques on the mortality and morbidity of patients with peptic ulcer perforation.
Material and Methods: Data from 112 patients presenting at our Training and Research Hospital Emergency Surgery Department between January 2010 and December 2015 who were diagnosed with PUP through physical examination and laboratory and radiological tests and operated at the hospital have been retrospectively analyzed. Patients were divided into three groups based on morbidity (Group 1), mortality (Group 2), and no complication (Group 3).
Results: Of the 112 patients included in the study, morbidity was observed in 21 (18.8%), mortality in 11 (9.8%), and no complication was observed in 80 (71.4%), who were discharged with cure. The differences between group for the average values of the perforation diameter and American Society of Anesthesiologists, Acute Physiology and Chronic Health Evaluation II, and Mannheim Peritonitis Index scores were statistically significant (p<0.001 for each). The average values for the group with mortality were significantly higher than those of the other groups.
Conclusion: In this study where we investigated risk factors for increased morbidity and mortality in PUPs, there was statistically significant difference between the average values for age, body mass index, perforation diameter, and Acute Physiology and Chronic Health Evaluation II and Mannheim Peritonitis Index scores among the three groups, whereas the amount of subdiaphragmatic free air did not differ.

With regard to creating a novel vision for former diseases, our memorizationsshould be updated. Some diseases and their outcomes, which have been previously very well known, are nowadays almost always presented as unexpected cases because of new technologies and evolvements in medicine due to resistant events. Thus, antiulcer medication and presentation of elderly patients have changed in peptic ulcer perforation (PUP) and, transforming the patient profiles with PUP in our era. Therefore, a novel vision to avoid gaps is necessary to evaluate the patients with PUPsas surgeons are coming across newer patient profiles in last decades. Peptic ulcers are focal defects in the stomach and the duodenum extending below the mucosa or deeper (1, 2). They can be acute or chronic; the etiology of the condition is the disruption of balance between gastric acid effect and mucosal defense mechanisms (2, 3). Although medical treatments such as H2 receptor antagonists, proton pump inhibitors, and Helicobacter pylori eradication through antibacterial drugs, have decreased the number of surgeries in non-complicated peptic ulcer cases, the number of patients presenting to the emergency clinics with peptic ulcer perforation has not decreased (1-5).

Peptic ulcer perforation is still an important health problem, despite the decreasing incidence of peptic ulcer disease. The aim of this study was to investigate factors affecting the mortality and morbidity of PUPs and specifically determine approaches to decrease mortality.

All patients were operated with the open technique. After the aspiration of the intraabdominal free fluid, the intraperitoneal cavity was irrigated with at least 1000 mL of isotonic saline and aspirated. The surgical procedure was determined by the operating surgeon and either one of omental patch with Graham’s procedure, bilateral truncal vagotomy with pyloroplasty or, antrectomy and gastroenterostomy was applied. Patients were divided into three groups based on morbidity (Group 1), mortality (Group 2), and no complication (Group 3).

Statistical Analysis
Statistical Package for Social Sciences software version 15.0 (SPSS Inc.; Chicago, IL, USA) was used for statistical analysis. Descriptive statistics were presented with number and percentage for categorical variables and mean, standard deviation, minimum, maximum, and median values for numerical variables. Comparisons between more than two independent groups were made using the one-way Anova test for normal distribution of numerical values and the Kruskal-Wallis test when normal distribution was not present. Subgroup analyses were carried out with the Tukey test for parametric tests and the Mann-Whitney U test for non-parametric tests and interpreted using the Bonferroni correction. The ratio of categorical variables between groups was tested using the chi square analysis. Risk factors for morbidity and mortality were evaluated using Cox regression analysis. Statistical significance level was accepted as p<0.05. 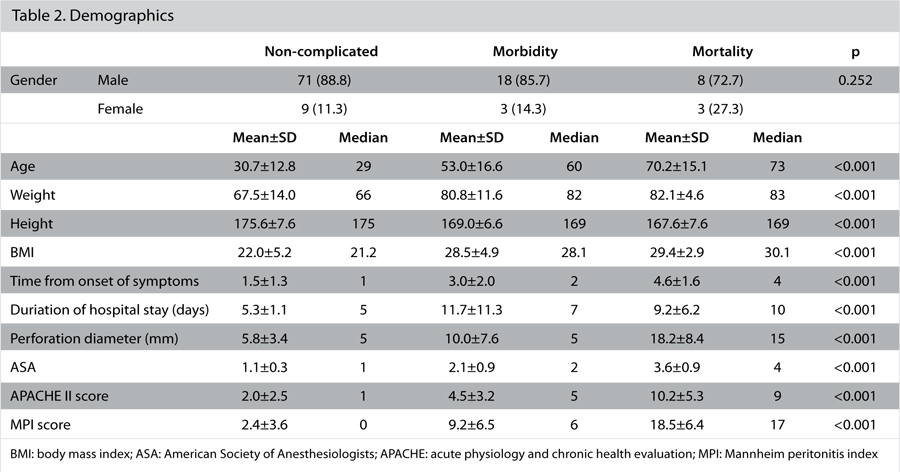 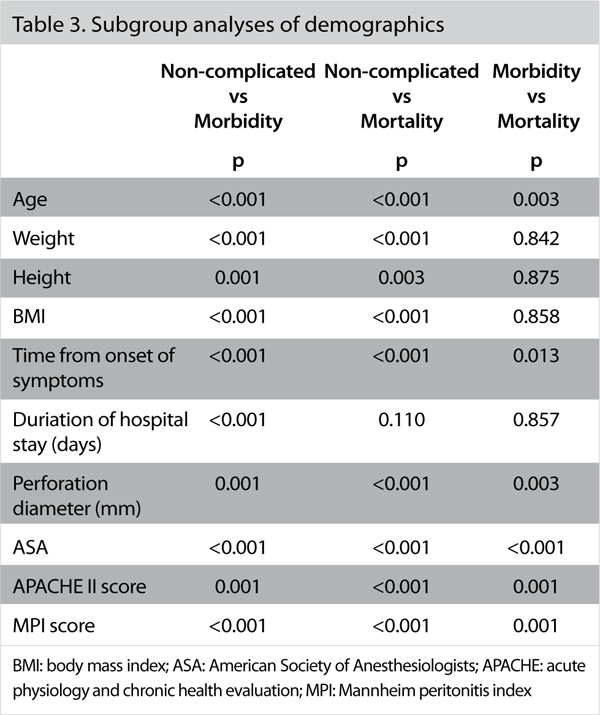 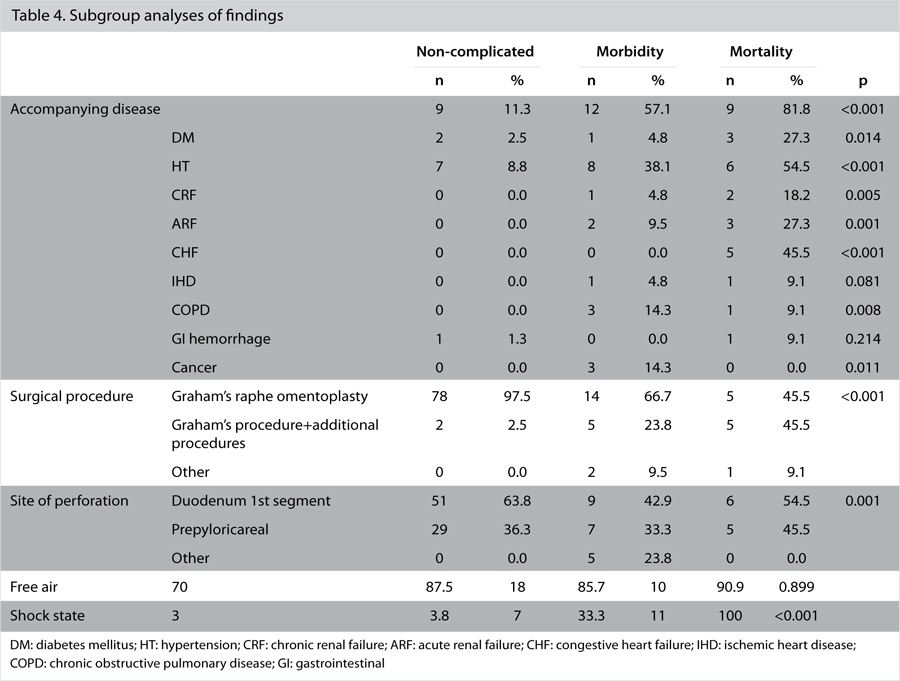 The mean body mass index (BMI) of the patients were significantly different among groups (p<0.001). The average BMI in the mortality and morbidity groups was significantly higher than that in the no complication group. 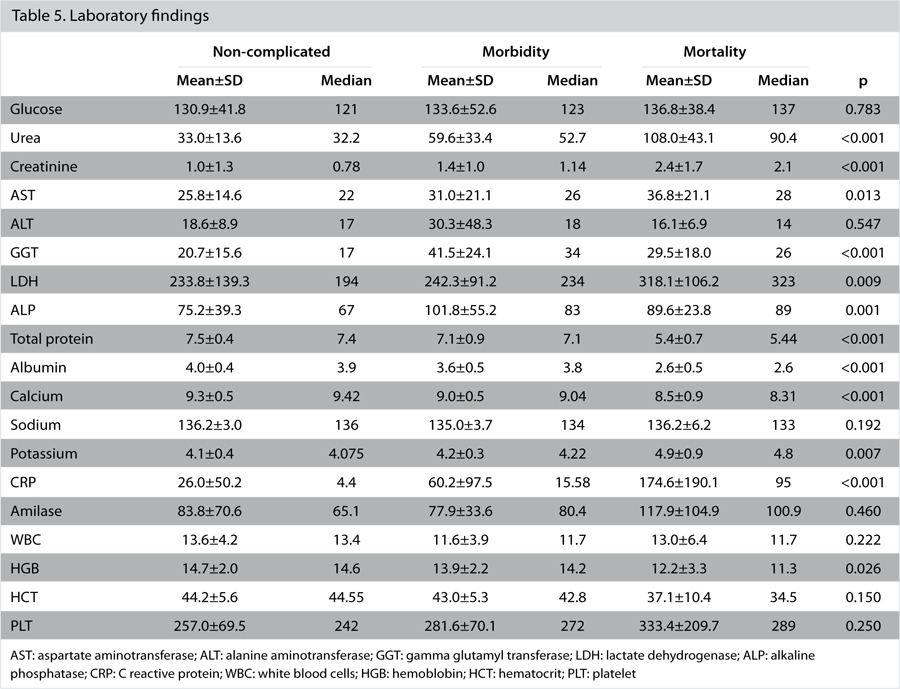 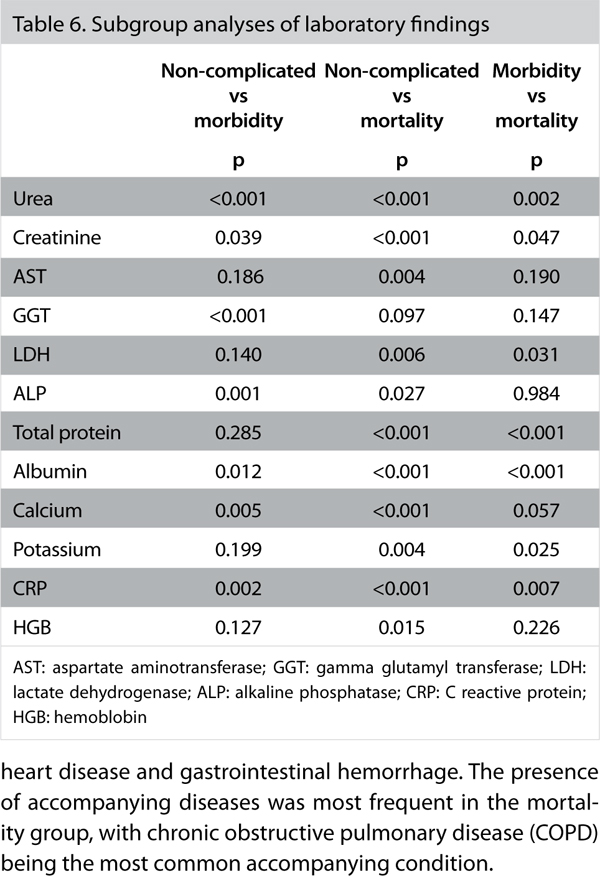 The presence of accompanying diseases showed a statistically significant difference between groups for all but ischemic heart disease and gastrointestinal hemorrhage. The presence of accompanying diseases was most frequent in the mortality group, with chronic obstructive pulmonary disease (COPD) being the most common accompanying condition.
The preferred surgical approach showed a statistically significant difference between the groups. In the morbidity and mortality groups, additional procedures to the Graham’s procedure were applied. The distribution of the site of perforation was significantly different among groups (p=0.001). In the morbidity group, hemorrhage from other sites was more common. State of shock was another variable showing statistically significant difference in distribution. All patients in the mortality group were in shock state.

Table 8. Most significant variables for morbidity 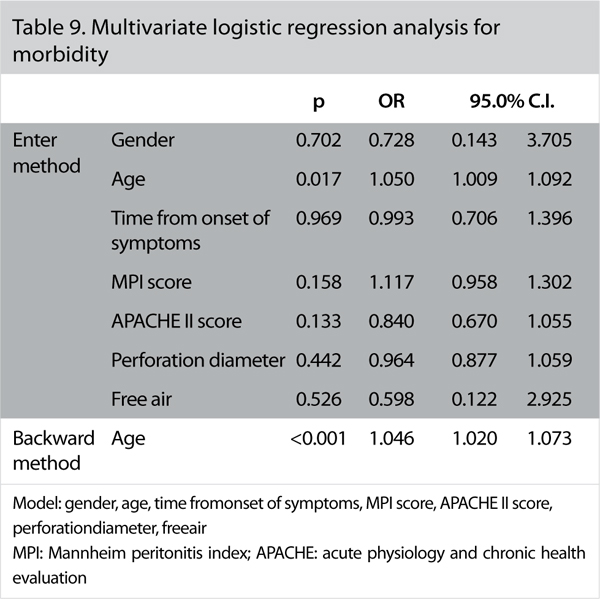 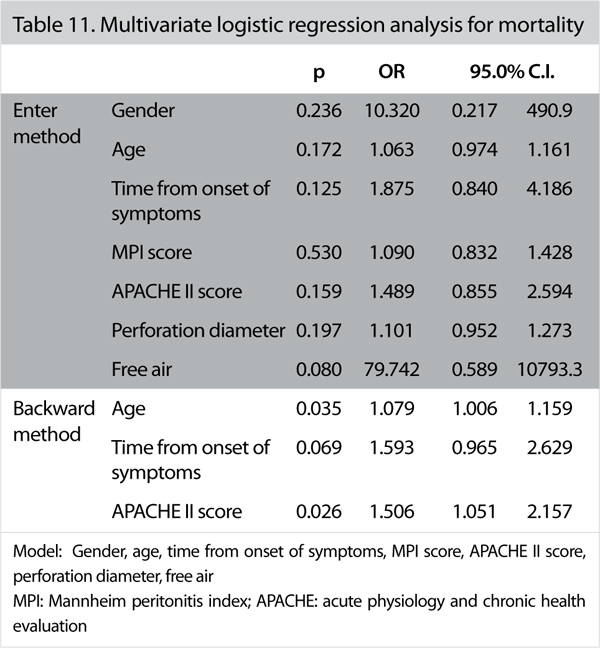 Perforation is the second most common complication of peptic ulcer disease following hemorrhage, with an incidence ranging from 3.77 to 14 in 100,000 (6-10). High rates of morbidity (20%-50%) and mortality (3%-40%) have been reported for patients surgically treated for PUP (11-14). There are many studies about the risk factors for these high mortality and morbidity rates. In our study, there were statistically significant differences between groups with regard to the average values for age, BMI, perforation diameter, APACHE II score, and MPI score (p<0.001).

The diagnosis of PUP is most often made using the initial plain abdominal X-ray (15-17). In our study, 98 (87.5%) patients were diagnosed using the initial plain abdominal X-ray. The presence of subdiaphragmatic free air did not have a statistically significant relationship with mortality or morbidity. Wakayama et al. (18) reported WBC counts below 9500/mm3 was a significant predictor of mortalityHowever, no significant effect of WBC count on mortality or morbidity was observed in our study.

There are many scoring systems for predicting risk of morbidity and mortality in PUP, with ASA and Boey scoring methods being the most commonly used ones (29-32). However, ASA score is used as an overall surgical risk score rather than just for predicting the risks of PUP. Also in many studies, high MPI and APACHE II scores were found to be related with increased mortality and morbidity. Some studies have only investigated the effects of preoperative shock state on morbidity and mortality, concluding it to be an important risk factor (26, 33-35) We used the ASA, MPI, and APACHE II scoring methods as variables in our study. According to the statistical analysis, we concluded that all three scoring methods could be used to predict the risk of mortality and morbidity.

Nomani et al. (25) have reported a worse prognosis in patients with a perforation diameter greater than 5 mm. Consistent with the literature, we found that a large perforation diameter significantly increases morbidity and mortality (26-36). Duration of postoperative hospital stay of patients operated for PUP ranges between 7 and 12.5 days (37-39). In our study, the mean duration of hospital stay was 11.7±11.3 days in the morbidity group and 5.3±1.1 days in the no complication group. The duration of postoperative hospital stay in the morbidity group was significantly longer than that in the no complication group (p<0.001). In their study with 2668 patients, Buck et al. (40) have calculated a two-fold risk of mortality for underweight patients operated for PUP, and determined that being obese has no positive or negative effect on mortality. In our study, for patients with an increased BMI, mortality and morbidity were also significantly increased in both univariate and multivariate analysis (p<0.001).

Written informed consent was obtained from patient who participated in this study.