Esophageal melanocytosis is a rare clinical and pathological condition characterized by non-atypical melanocytic proliferation and increased melanin in the esophageal mucosa, which is normally histologically non-melanocytic. Intensive melanin accumulation and hyperpigmentation are necessary for endoscopic recognition. Due to the fact that it is a rare gastrointestinal system pathology, experience and knowledge about its diagnosis, treatment and course are also limited. Although it is argued that chronic stimulating factors have an influence, there is no clear information about its etiology and pathogenesis. Malignant melanomas and melanocytic nevus in particular come to the fore in the differential diagnosis. Opinions and findings indicating that melanocytosis may be a precursor for malignant melanoma make the recognition and follow-up of this clinical and pathological entity more important. In this article, a patient with esophageal melanocytosis diagnosed by endoscopic evaluation is presented, with the aim of increasing the awareness of clinicians, especially endoscopists and pathologists, on this subject.

Esophageal melanocytosis is one of the very rare pathologies of the gastrointestinal system. It is described as a benign condition characterized by melanocytic proliferation in the basal epithelium of the esophagus, hyperpigmentation, and increased accumulation of melanin in the mucosa (1). It is observed to receive more diagnoses in autopsy series compared to endoscopy-based studies. This is associated with the need for melanin accumulation in very large quantities in the mucosa in order for melanocytosis to become endoscopically visible (2). In addition to this, the extremely rare occurrence of the disease significantly limits the experience of endoscopists with regard to diagnosis and follow-up. In this article, a case of esophageal melanocytosis who was admitted due to dyspeptic complaints was presented, with the aim of increasing the awareness of clinicians on this issue.

A 45-year-old male patient presented to our clinic with dyspeptic complaints that had been present for approximately 4 months. There was nothing particular in his personal or family history. No physical anomaly was detected in the physical examination and laboratory tests. The patient underwent an upper gastrointestinal system endoscopy with a Pentax EPK-100p Endoscope (Hoya Comp, Tokyo; Japan). A dark brown-black colored, dotted area of mucosal pigmentation with faint borders and dispersed localization despite being denser in a few foci and taking up almost 1/3 of the lumen was observed along a segment of approximately 2 cm at the distal part of the thoracic esophagus (Figure 1). Multiple biopsies were taken from this area. Sampling with biopsy was done from the antrum because of a hyperemic, speckled and edematous mucosal appearance consistent with antral gastritis. No other pathology was observed endoscopically. In the examination, the gastric antrum samples were evaluated as being consistent with Helicobacter pylori negative chronic gastritis with no atrophy and no metaplasia and showing activation. In the esophageal biopsies, melanin loaded cells in large quantities which were cytologically non-atypical and consistent with melanocytosis in addition to chronic inflammatory cells in supportive tissue areas that could be seen between the papillae were observed (Figure 2A and 2B). Recommendations for nutritional and lifestyle changes were made to the patient and proton pump inhibitor therapy was initiated. In his follow-up, his dyspeptic complaints were seen to disappear completely. Written consent was obtained from the patient that his medical data could be published. 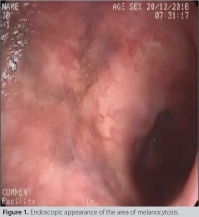 Figure 1. Endoscopic appearance of the area of melanocytosis.
× 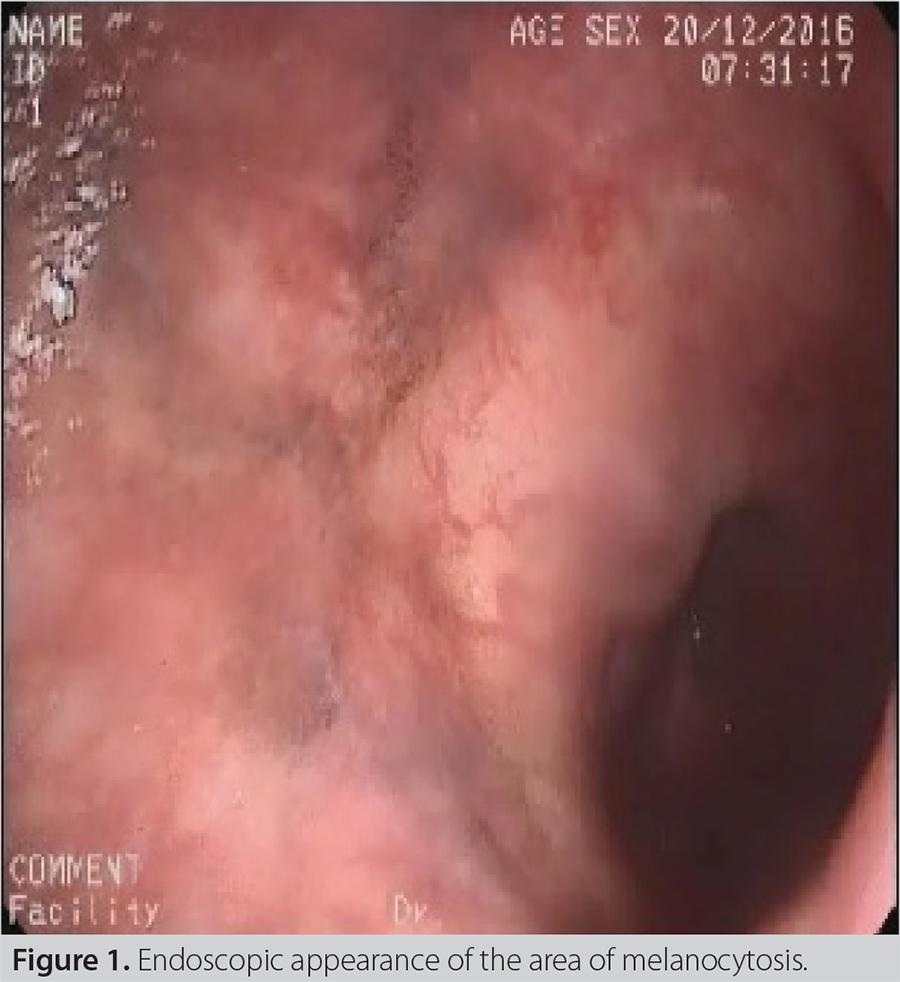 The presence of melanocytic cells in the esophagus was first described by De La Pava et al. in 1963 (3). The rate of melanocytosis in autopsy-based studies ranges from 4% to 7.7%, while studies based on consecutive endoscopy series report this rate to be between 0.07% and 2.1% (1-5).

Histologically, the esophagus mucosa normally does not contain melanocytes. Although the pathogenesis of melanocytosis formation has not been clearly revealed, there are two prominent theories. The first of these argues that melanocytes may have settled in the esophagus through aberrant migration during embryogenesis and the second argues that the stem cells located in the basal layer differentiate into melanocytes as a result of various influences (1,6).

There is no specific symptom or clinical entity pertaining to this pathology, which is usually incidentally diagnosed (2,7). It has been argued that chronic irritant conditions that lead to mucosal damage, such as chronic esophagitis, alkaline reflux and especially gastroesophageal reflux are associated with the disease (1,4-7). Similarly, melanocytic nevus and malignant melanomas presenting with melanin accumulation come to the fore in the differential diagnosis of esophageal melanocytosis. Malignant melanoma, in particular, is a very aggressive tumor with a high metastatic potential and poor prognosis. It is characterized by a histological structure with nuclear atypia, a prominent nucleolus, high mitotic activity and an epithelioid or spindle cell type (1). Melanocytic nevus are distinguished from melanomas by not involving cytological atypia and distinguished from melanocytosis by the presence of pigmented dendritic melanocytes in the subepithelial connective tissue and the lack of junctional melanocytic activity (1,2,8). Esophageal melanocytosis is usually described as a benign lesion that does not require treatment or follow-up (9). Despite this, cases progressing into malignant melanoma have been reported (10-12). There are publications suggesting the clinical and endoscopic follow-up of these patients because it is seen as a lesion that is a precursor for melanoma, it is proposed to follow-up with multiple biopsies (7,12,13).

Esophageal melanocytosis is a pathology that has found its place in the literature with a limited number of case reports. Hence, experiences regarding its diagnosis, treatment and prognosis are limited. It is important for endoscopists and pathologists to consider melanocytosis in the differential diagnosis of esophageal pathologies. It is seen that melanocytosis can be a precursor for esophageal malignant melanoma in the findings of literature. Therefore, it is a correct approach to consider these lesions as premalignant esophageal pathologies. Endoscopic follow-up at intervals of 1-3 years is recommended in many premalignant esophageal pathologies, depending on the presence of dysplasia or other risk factors (14). However, as the number of cases is very limited and also the presence of patients who are diagnosed with malignant melanoma two years after the diagnosis of melanocytosis, we believe that the endoscopic follow-up should not be longer than one year. (12). The sharing of experience and information obtained after frequent periodic follow-ups will also contribute to the establishment of a consensus for follow-up strategy of this pathology. Currently, treatments such as endoscopic mucosal resection and radiofrequency ablation, in the treatment of premalignant esophageal lesions, can be performed with high success rates (15). We believe that endoscopic resection treatments should be offered as an alternative in melanocytosis due to the potential for malignant transformation, especially in patients with a limited area of melanocytosis in the esophagus lumen and who are not being eager enough for frequent endoscopic follow-up.

We are of the opinion that close endoscopic and pathological follow-up will be appropriate for these patients since there is not adequate information about the course of the disease. It is seen that there are not enough data based on long-term observation yet for the standardization of the follow-up of cases or bringing up endoscopic or surgical treatments. Nevertheless, we consider that endoscopic resection treatments can be applied in appropriate cases when melanocytosis is considered to have potential for melanoma transformation, a very aggressive malignant tumor.