Umbilical hernia (UH) and paraumbilical hernia (PUH) are ventral herniae that occur in the region of the umbilicus or around the umbilicus (1, 2). UH accounts for 10% of abdominal herniae (3). UH occurs in infants and children, while PUH occurs in adults. UH rarely occurs in adult patients with ascites, obesity, and massive abdominal distention from various causes. There are advantages to the management of UH and PUH using meshes (3, 4). The different surgical methods employed in the repair of UH and PUH are open anatomical repair, open mesh repair with different sites of mesh placement (onlay, sublay, and inlay), laparoscopic intraperitoneal onlay mesh repair (IPOM), and open IPOM. The recurrence rate (19% to 54%) is greater in anatomical suturing than in mesh repair (5-7). The different sites of deployment of mesh have advantages and disadvantages. In this study, we attempted to analyze two common techniques (open onlay mesh repair and laparoscopic IPOM) and a newer technique, open IPOM, using Ventralex ST for UH and PUH.

A retrospective analysis of patients who underwent operations for UH and PUH at the Institute of General Surgery, Madras Medical College, was performed. Patients who underwent surgery for UH and PUH over a period of four months, from November 2015 to February 2016, were chosen for the study. Institutional ethical committee clearance was obtained to collect the data. Informed consent was obtained from the chosen patients. Fifty-four patients were diagnosed with UH and PUH. Of these, five patients underwent open anatomical suture repair operations as an emergency procedure and another six patients underwent open mesh repair with associated bowel pathology, for which bowel surgery was performed. Excluding these 11 cases, 43 patients with UH and PUH in whom different types of mesh were used were chosen for the study. All the patients were euthyroid before and after surgery. Of the 43 patients who underwent mesh repair, 23 patients underwent open mesh repair using Prolene mesh, 12 patients underwent laparoscopic IPOM using composite dual side mesh (Ethicon Physiomesh flexible composite mesh), and eight underwent open IPOM using a Ventralex ST hernia patch. The surgeons had preferences with regard to the operative methods. All the surgeries were performed by professors and assistant professors and were assisted by senior residents of the institute. The demographic data were analyzed (Table 1). The descriptive data analyzed were the duration of the surgery, the number of days of postoperative hospital stay, the type of anesthesia, and the immediate postoperative complications. A short term follow-up of five months was performed to analyze the immediate recurrence.

Table 1. Characteristics of the study group 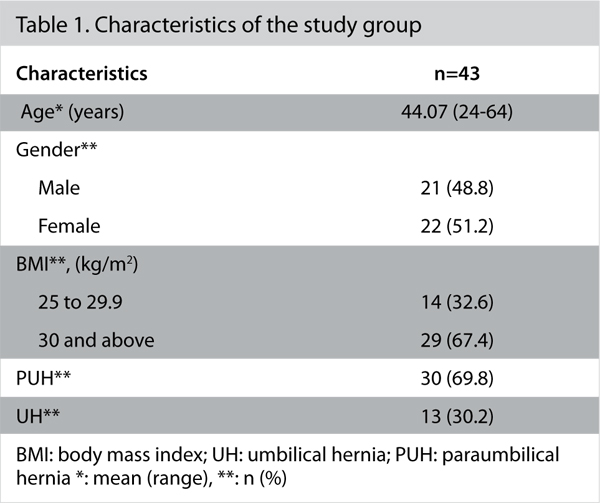 Technique
In open onlay mesh repair, under regional anesthesia, the sacs of the UH and PUH were dissected all around, and the defect was closed using 1.0 Prolene. Then, a cutaneous flap was raised around the defect for 5 cm, and an onlay Prolene mesh (Bard Davol Inc; Murray Hill, NJ, USA) was placed and fixed to the anterior rectus sheath using 2.0 Prolene; then, a suction drain was placed to avoid seroma to complete the procedure. In the laparoscopic IPOM technique, under general anesthesia, Palmer’s point was chosen for a 10 mm camera port and two 5 mm working ports were placed using the baseball diamond technique. Composite dual side mesh (Ethicon Physiomesh; Johnson & Johnson, USA, which has since been withdrawn from the market due to high recurrence) was used in all cases; the defects were closed with 1.0 Prolene, and the composite mesh was fixed using absorbable tackers (Ethicon Securestrap; Johnson & Johnson, USA). In the open IPOM technique, under regional anesthesia, the UH or PUH sac was opened, the contents were reduced, and the adhesions were released. A composite mesh with a Seprafilm-coated adhesion barrier (Ventralex ST hernia patch; Bard Davol Inc., USA) was placed intraperitoneally; then, the mesh was fixed to the rectus sheath. In all cases, the skin was closed in layers and a sterile dressing was applied.

Forty-three patients were chosen for the study. The median age of the studied population was 48 (range=40, 28 to 68). The sex ratio of the participants was almost equal (male vs. female, n=21 vs. 22; 48.2% vs. 51.8%). There were 69.8% cases of PUH (n=30) and 30.2% cases of UH (n=13) that were operated with different types of meshes. The number of cases diagnosed as PUH or UH and the different meshes used in the various surgical methods are illustrated in Table 2. The three techniques used by the surgeons for UH and PUH were open onlay mesh repair, laparoscopic IPOM repair, and open IPOM repair. The median size of the defects in both UH and PUH was 2 cm (mean=1.6 cm, min 1 cm to max 2 cm). 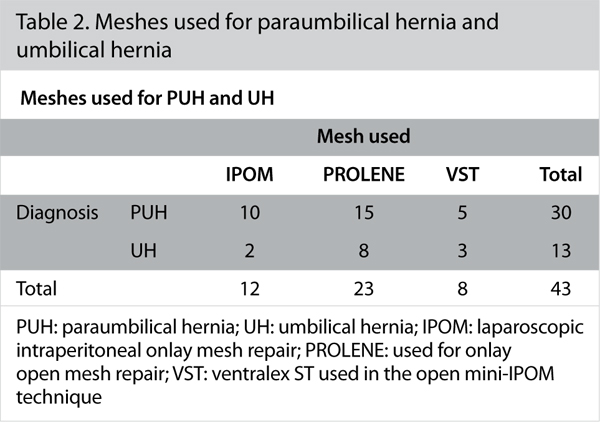 Table 3. Types of meshes used and the preferred type of anesthesia 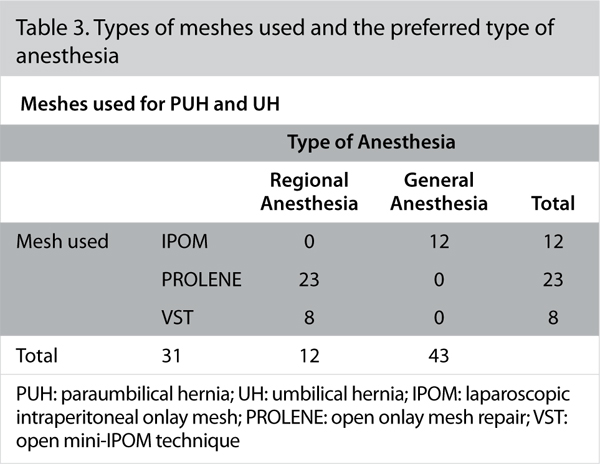 Umbilical hernia and PUH are repaired using mesh to avoid recurrence. In this study, we compared three different surgical techniques employed for UH and PUH and the influence of various meshes (Prolene, composite IPOM, composite IPOM for the open IPOM technique) on the duration of the surgery and the postoperative hospital stay. The use of mesh in UH and PUH repair results in very low recurrence. (5) The study population had a median defect size of 2 cm (range 1 to 2). The average BMI of the study population was 30.431 (range 27 to 34). Therefore, the statistical significance of the variables obtained from this study is appropriate for mildly obese patients and for UH and PUH with small defects.

In the open mesh repair onlay technique, the use of Prolene mesh requires more time for flap dissection and mesh reinforcement. The longer the surgery, the more frequent the occurrence of complications, as revealed by the postoperative pain, seroma, and wound gapping experienced following open onlay mesh repair compared to the other methods. The duration of surgery strongly signifies definitive postoperative pain (p=0.029, Pearson Chi-Square test); however, there is no statistical significance with regard to duration of surgery when compared to seroma formation and wound gapping (8).

The laparoscopic IPOM technique is technically demanding. The cost of the mesh is high when compared to the mesh used for open herniae. Generally, postoperative pain due to tackers is less than that due to intracorporeal suturing. However, the open IPOM technique is not technically demanding compared to laparoscopic IPOM. In open mesh repair, the long duration of postoperative stay was attributed to delayed removal of the drainage tube. Although many surgeons favor open onlay mesh repair, the postoperative stay and frequency of seroma formation make it a less attractive option.

The objectives of open IPOM repair are a small incision, minimal dissection, and shorter duration of surgery (9). This technique has statistical significance for shorter postoperative stay (median=1 day); thus, this technique is preferable for patients who desire early recovery to resume their regular activities. In this study, the cost factor and the long-term recurrence rates were not studied. However, many studies have revealed that the open IPOM technique for UH and PUH has lower recurrence rates (10). The minimal postoperative pain in the open IPOM technique is due to the shorter duration of surgery and minimal tissue handling. As the mesh is anchored in the midline along the linea alba at one or two sites, the postoperative pain is lower compared to that of multiple anchoring in the laparoscopic IPOM and open mesh repair techniques.

Limitations
An important aspect of the validity of any hernia surgery is the long-term recurrence rate, which is not addressed here. The cost of the different meshes was not analyzed. The influence of the open IPOM technique on UH and PUH with large defects remains to be addressed.

Of the three techniques, open IPOM is the preferred choice for patients with small defects who need to return to work early with less postoperative pain.