Objective: The diagnosis of fecal incontinence is challenging and complex. One of the most significant causes of fecal incontinence is trauma in the perianal area. The most important cause of such trauma is birth trauma. It is hard to evaluate patients and plan treatment. Surgical method is determined by the severity of sphincter damage and injuries formed in the organs in the perianal area. The aim of this study, therefore, was to analyze the cases of patients who had undergone sphincter repair because of acute injuries in the perianal area.
Material and Methods: The cases of 15 patients with perianal area injuries who had presented to Necmettin Erbakan University Meram Medical School’s General Surgery Clinic between 2010 and 2015 were retrospectively analyzed. Data on age, sex, form of injury, severity of injury, time of first response, form of repair, injury problems, and post-operative complications of the patients were investigated. The patients’ long-term results were analyzed.
Results: While 5 of the patients were male, 10 were female. 9 of the female patients had birth trauma, while one had injury during sexual intercourse. While all of the patients received sphincteroplasty, 10 had levatoroplasty. All the female patients received vaginoplasty.
Conclusion: We are of the opinion that it is significant to have surgical intervention before tissue edema develops.

The cases of 15 patients with perianal area injuries who had presented to Necmettin Erbakan University Meram Medical School’s General Surgery Clinic between 2010 and 2015 were retrospectively analyzed. Ethics committee approval was received for this study from the ethics committee of Necmettin Erbakan University Meram School of Medicine (10.08.2017-2017/361). Data on age, sex, form of injury, severity of injury, time of first response, form of repair, injury problems, and post-operative complications of the patients were investigated. The patients’ long-term results were analyzed. Patients who had not received emergency surgery but undergone repair in the late period and those who had had intraabdominal organ injuries were excluded from the study in line with the exclusion criteria. 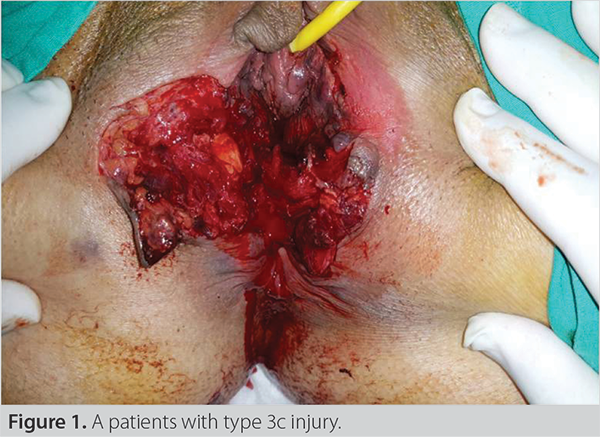 Male patients were taken into surgery at an average of 8 hours (3-15 hours) after the incident. Nine of the female patients received intervention within the first 10 (1-18) hours. One patient was treated at an external center initially and presented to our center on the 3rd day upon the formation of split in the injury. This patient was re-operated. 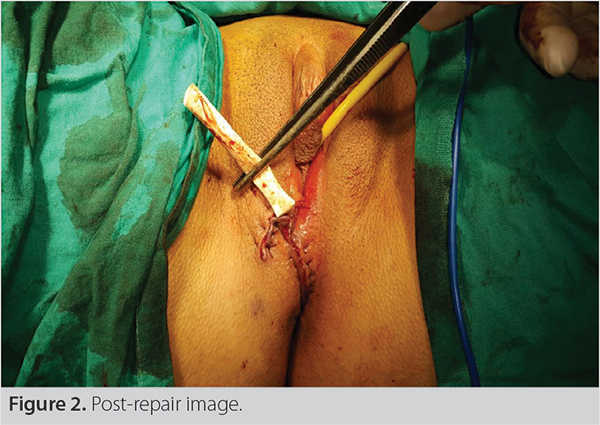 Four patients contracted gas incontinence in the 6th month. These patients received biofeedback for 2 months upon failure to detect complete sphincter damage by imaging techniques. Patients’ complaints got better at the end of two months. The patients have been in the follow-up program for a mean period of 3 years and they do not have complaints of incontinence.

Mortality and morbidity following perianal area injuries are high. The most significant cause of morbidity is fecal and urinary incontinence seen in the early and late periods. The early period following injury is a process which necessitates important decision making stages like the prevention of infection, need for colostomy, and repair methods. The root cause of the problem in most of the patients with fecal incontinence is sphincter defects that emerge after obstetric trauma or perianal area surgeries. 53% to 79% of the patients have injuries at varying degrees following vaginal delivery (4,5). Although the rate of such injuries is too high, not all the injuries cause sphincter damage. The rate of primary obstetric anal sphincter injury is about 18% in vaginal deliveries (6). Eight studies have been investigated by a meta-analysis and it has been found that 5.7% of women in their first labor and 6.3% in their following labors have anal sphincter injuries (7). In another study, a total of 700 patients pregnant with twins have been evaluated and the rate of sphincter injury has been found to be 2.8% (8). In a study conducted with patients who had vaginal or c-section deliveries, the authors have found that complaints related to incontinence varied between 13% and 25% (9). The rate of fecal incontinence in patients with sphincter injury following delivery is about 7.7% (10). The rate of incontinence is 6.3% in nulliparous women, while it is 8.8% in uniparous women, 8.4% in secundiparous women, and this rate goes as high as 11.5% in triparous women and women who had more than 3 deliveries (11). Only 27% of endoanal ultrasonography results show occult anal sphincter injuries (12). One third of the patients shown to have damage also had symptoms of incontinence. Asymptomatic patients are at risk in the years to come with regards to incontinence. Almost all female patients presented with trauma at delivery. Male patients, on the other hand, had sphincter injury due to falling down from heights.

The creation of episiotomy during delivery prevents uncontrolled perianal fissures. The results of a meta-analysis; however, has revealed that episiotomy increases the risk of fecal incontinence (13). The most significant parameters for sphincter damage in vaginal delivery are interventional delivery and birth-weight of the baby (14). Tertiary level fissures are frequently seen in interventional deliveries with midline episiotomy. Uncontrolled fissures are seen less after medio-lateral episiotomy procedures. Although 6 of our patients had episiotomy, uncontrolled fissures could not be prevented. We believe that the reason for this was the problematic timing of the episiotomy. Although the starting point of the episio-incision was medio-lateral, it continued towards the medial afterwards. Six of these patients had interventional deliveries. Five of the babies had a birth weight of more than 4000 grams.

Incontinence can be seen in women with sphincter injuries during delivery after repair. The most significant cause of this is residual anterior sphincter defects (3). Adequate continence might not be achieved in the long term by the primary repair of third and fourth degree sphincter fissures that form during delivery. Although primary repair is done during delivery, 15-61% anal incontinence has been reported. Endoanal ultrasonography results presented in some studies have demonstrated that sphincter injuries up to 91% remain in patients with fissures repaired by interrupted side-to-side sutures (3,19). Follow-ups up to 3 years have not shown any significant continence problems in our cases. The biofeedback therapy offered to patients experiencing gas incontinence and urogenesis problems has proven to be helpful.

Sphincter repair should be performed at experienced centers controlled by coloproctologists.
Physicians should note that sphincter injuries may happen after every delivery.
Patients should be informed about the fact that they might experience incontinence problems during the follow-ups. We are of the opinion that it is significant to have surgical intervention before tissue edema develops.

Ethics committee approval was received for this study from the ethics committee of Necmettin Erbakan University Meram School of Medicine (10.08.2017-2017/361).

Written informed consent was obtained from patients who participated in this article.