Objective: Candida species are among the most important causes of hospital acquired blood borne infections, and with high rates of mortality and morbidity, these infections are still a major problem today. History of gastrointestinal surgery, administration of total parenteral nutrition and/or wide spectrum antibiotics and immune suppression following organ transplantations are considered serious risk factors for these infections. This study aimed to evaluate the patients from our general surgery department with diagnosed candidemia; by means of strain, treatment and prognosis.

Material and Methods: Patients with positive blood cultures for Candida species who were treated in the wards and Ege University Faculty of Medicine general surgery department of surgical intensive care units of our between 2012 and 2017 were retrospectively analyzed by means of strain, treatment and prognosis.

Candidemia demonstrated as an important part of invasive fungal infections and also a significant factor for the high mortality rates, prolonged length of hospital stay and high health-related costs, ranks between the fourth and seventh mostly seen disease among the blood stream infections in the United States and Europe (1). Candidemia incidence has been shown as 1.23 to 12.3 per 1000 admissions from our country which can be varied due to regional differences in terms of mortality rates, isolated pathogens, risk factors and antifungal susceptibility rates (2-5).

This study aimed to evaluate the pathogens, treatments and prognosis of the patients followed by the General Surgery Department of our hospital.

In our study, the patients with positive blood cultures for Candida who were followed up by the Ege University Faculty of Medicine, General Surgery Department (Inpatient Clinic/Intensive Care Unit/Transplantation Unit) between the years of 2012-2017 were evaluated in terms of pathogen, treatment and prognosis, retrospectively. At least one positive blood culture for Candida spp. was accepted as candidemia and only adult patients (≥ 18-year-old) were included into our study. Sociodemographic features, risk factors, blood culture results, 30-day (due to all causes) mortality rates and antifungal treatment regimens were screened via the patients’ files. Sabouraud dextrose agar (Acumedia; Michigan, USA) was used for the culture, and identification of the species was performed by conventional methods (Dalmou method) with micromorphologic features, ID32C (bioMerieux; France) with carbohydrate assimilation features and MALDI-TOFF MS with proteomic features. Antifungal susceptibilities were investigated via E-test method, and minimum inhibitor concentration levels were used according to the CLSI guideline (6,7).

No ethics committee approval was sought due to the retrospective design of the study. Our study was performed in accordance to the ethical standards of the Helsinki Declaration which was accepted by the World Health Community in 1975 (revised in 2008). 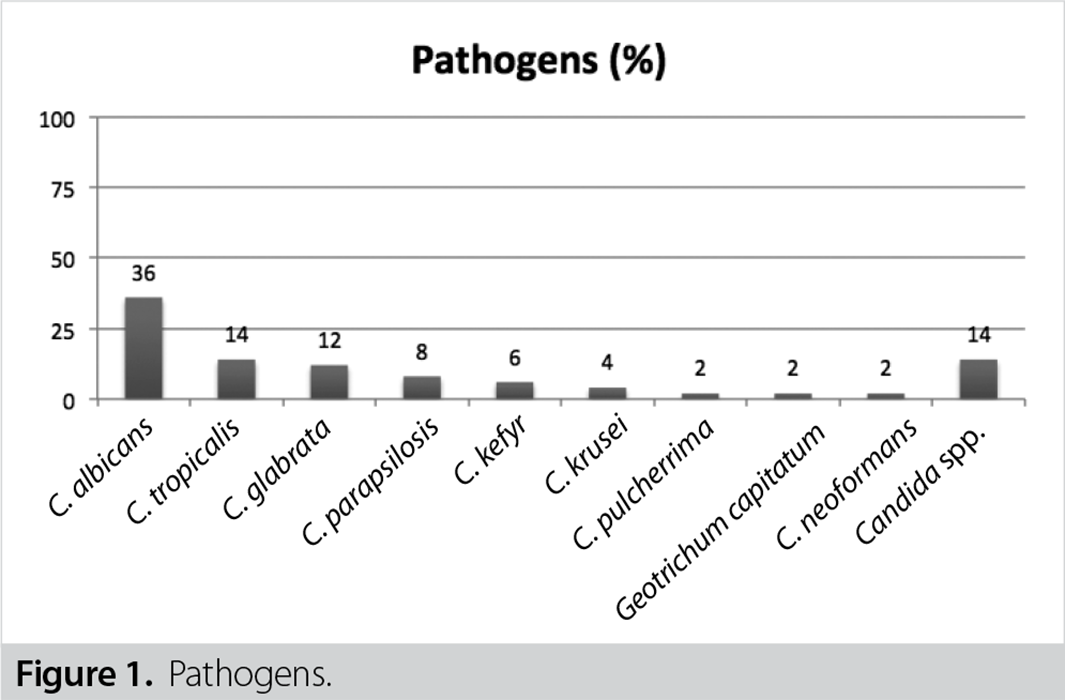 A total number of four patients were discharged or transported to another hospitals, and thus the rest of the patients’ all-cause mortality rate (for one month) was noted as 43.4% (40/46). Antifungal treatment was not started in nine patients and mortality was observed in five. Four patients, in whom antifungal treatment was not started, were discharged or transported, and hence their follow up cannot been done. In subgroup analysis of different treatment regimens, mortality (one-month) rates were recorded as (5/9; 55.6%) for fluconazole, (8/27; 29.6%) for anidulafungin, (1/3; 33.3%) for caspofungin, (1/1; 100%) and (0/1, 0%) for liposomal amphotericin B plus fluconazole, respectively. Mortality rate (one-month) was found as statistically significant for the anidulafungin treatment given and non-given group (8/27-12/19; p= 0.024).

Microbiologic eradication was noticed in 24/33 patients whose control cultures were performed with a mean duration of 7.6 days. Mortality rate (one-month) was found as statistically significant for the microbiologic responsive and nonresponsive group (4/24-7/9; p= 0.002).

Mean duration of treatment was noted as 17.9 ± 2.26 (min 1, max 58 days) in the treatment given patients. Echocardiography was performed in 14% (7/50) and ophthalmoscopic examination was done in 8% (4/50) during the follow up period of candidemia patients. Infective endocarditis was spotted in one out of seven patients via echocardiography, and none of the four patients had septic emboly in whom ophthalmoscopic examination was carried out.

Although the mostly seen pathogen is C. albicansin candidemia patients, the incidence of non-albicansCandidaisolates has increased in recent years (1-3,13). Urethral catheterization, total parenteral nutrition, history of wide spectrum antibiotic usage, blood transfusion, central venous catheters are accepted as the important risk factors for candidemia (8). In our study, although the mostly detected pathogen was C. albicans(36%) in candidemia patients similar to the literature data, non-albicans Candidawas also seen with high numbers (50%). History of gastrointestinal surgery, total parenteral nutrition, organ transplantation and immunosupression were the main risk factors for candidemia in our study.

Five main subjects underlined to increase survival rates in candidemia patients are appropriate antifungal treatment, control blood culture follow-up, echocardiography control, ophthalmoscopic examination and removal of central venous catheter, respectively (12). Another important result of our study revealed that echocardiography and ophthalmoscopic examination were performed only in 14% (7/50) and 8% (4/50) of the candidemia patients.

The most important limitations of the study included its retrospective design and the fact that antifungal susceptibility test could not be performed in all samples.

In conclusion, appropriate antifungal treatment has a vital importance in candidemia patients due to high mortality rates despite the current diagnostic and therapeutic options. Although the mostly seen pathogen is C. albicansin candidemia patients, the incidence of non albicans Candidaisolates is increasing. Due to high resistance for fluconazole, we believe that echinocandins like anidulafungin are more appropriate choices of antifungal treatment rather than fluconazole especially for the hemodynamically unstable intensive care unit patients. In addition to this, echocardiography and ophthalmoscopic examination should be kept in mind for the follow-up of candidemia patients.

No ethics committee approval was sought due to the retrospective design of the study.

Due to the retrospective design of the study, the informed consent was not obtained.