Material and Methods: Seven hundred forty-eight patients were included in our prospectively designed study. Of these 748 patients, 1496 nerves at risk were studied. Group 1 consisted of 736 nerves that were identified using IONM, whereas Group 2 consisted of 760 visually identified nerves.

Conclusion: In spite of the fact that the duration of the operation was lower with IONM, the abbreviated duration may not appear to have clinical significance. The main advantage is for less experienced surgeons. IONM significantly decreases RLN palsy rates of the surgeons with limited experience in thyroid surgery.

Thyroidectomy is performed very frequently in regions with iodine deficiency. The most serious complications of thyroidectomy are recurrent laryngeal nerve (RLN) palsy and hypoparathyroidism, which can considerably worsen the patients’ quality of life. In spite of the fact that the rate of nerve paralysis is small, when it happens, it may be life-long in capacity (1,2). The incidence of nerve paralysis is reported to be 0%-14% (1-4). Conditions, such as retrosternal goiter, redo surgeries, or surgeries for malignant thyroid disorders, put the nerves at highest risks, and even experienced surgeons may accidentally damage the recurrent nerve, resulting in nerve paralysis in approximately 1%-2%. Since the early 1930’s, routine visualization of RLN rather than avoiding it has become the standard of care (5-7).

Intraoperative nerve monitoring (IONM) during thyroid surgery has gained widespread acceptance as an aid to the gold standard of visually identifying the RLN (8-10). Different techniques to monitor the nerve include palpation of the cricothyroid muscle while stimulating the nerve; observation of the glottis for vocal cord movement while stimulating the recurrent nerve, which can be performed by either laryngoscopy or fiberoptic nasopharyngoscopy; monitoring the pressure of the glottis on the endotracheal tube and finally, through surface electrodes placed on the endotracheal tube, which are in contact with the vocal cords (8,9,11-14). Currently, the most common type of IONM is made by an endotracheal tube with electrodes secured on its wall, and those electrodes record the activities of the vocal cords as stimulated.

Many studies have shown that routine intraoperative RLN monitoring decreases permanent paralysis rates (12,15-18). Nevertheless, its role in foreseeing postoperative nerve function and decreasing RLN injury is an ongoing debate (19-22). The aim of the present study was to assess the effect of intraoperative RLN identification by using IONM during thyroidectomy.

This was a prospectively designed study. Eight hundred fifteen consecutive patients with benign euthyroid thyroid disorders (multinodular goiter) (fine needle aspiration biopsy with suspicion of malignancy, aesthetic concerns, and pressure symptoms) who underwent thyroidectomy at the Department of General Surgery, Istanbul University, Istanbul Medical Faculty between April 2008 and April 2016 were intended to be included into the study. 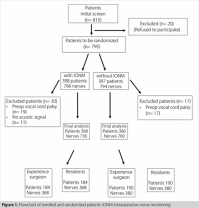 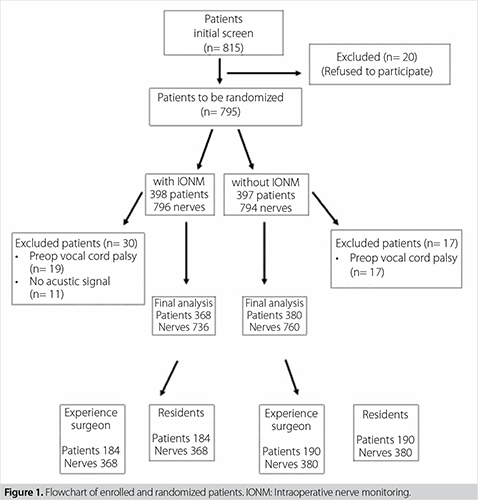 Patients were randomized to have RLNs recognized by visualization or neuronal monitoring throughout the surgery. Randomization of the cases was provided by the resident not working in the study using coins (heads or tails method). Group 1 (n= 736) consisted of nerves, which were recognized with IONM, whereas Group 2 (n= 760) without IONM. Both groups were further divided into subgroups A and B. Groups 1A and 2A consisted of patients whose surgeries were performed by a qualified endocrine surgeon (n= 3), and groups 1B and 2B consisted of patients who were operated by 4th year residents (n= 4). Ethics committee approval was received for this study from the institutional Ethics Committee of Istanbul University, Istanbul Medical Faculty (762/2007). Informed consent was obtained from all patients.

The patient was in supine position under general anesthesia with the neck extended. Following a low collar incision, the superior and inferior subplatysmal flaps were prepared. After the strap muscles were separated and lateralized, the thyroid lobe was freed from its investing fascia and retracted medially. When present, the middle thyroid vein was sealed and cut. The superior thyroid artery and vein were ligated close to the thyroid tissue. The tracheoesophageal groove was prepared and dissected to identify the recurrent nerve. When found, the RLN was delicately freed from the adjacent tissues. As soon as the RLN and parathyroid glands were secured, the ligament of Berry was divided, and the thyroid lobe was detached from its attachments to the trachea.

No neuromuscular blocking agents were utilized during intubation in the IONM group. Endotracheal tube monitoring systems (Medtronic; Nerve Integrity Monitor (NIM), Jacksonville, FL, USA) were used to screen the thyroarytenoid muscles for electromyographic (EMG) activity. Intermittent nerve monitoring was used. The stimulation current was set at 1.5 mA, and a disposable probe was used. First, an EMG signal from the vagus nerve was aimed. Dissection of the RLN was started after the EMG signal was obtained from the vagus nerve, which confirmed the accuracy of the tube placement. The event threshold was set at 100 mV. Then signal from the RLN was obtained in the tracheoesophageal groove, which was totally dissected from the ligament of Berry. If a signal loss occurred at a level of 2 mA, equipment failure was assumed. After hemostasis was performed and the operative field was free of any fluids, the final test of the vagus was performed. Duration of the operation was measured from skin preparation until the end of wound closure.

Both pre- and postoperative laryngoscopic examinations of the patients were performed by an otolaryngologist to assess vocal cord functions. If vocal cord palsy occured, presented with dysphonia, laryngoscopic examinations were repeated on postoperative months 1 and 6. If clinical dysphonia and dysfunction of the vocal cords lasted > 12 months, it was considered as persistent nerve palsy.

Statistical analysis was made using the Statistical Packages for the Social Sciences (SPSS) version 21.0 for Windows (IBM Corp.; Armonk, NY, USA). Results were expressed as mean ± SD. Chi-square test, Wilcoxon signed-rank test, and logistic regression analysis were used for the comparison of data. A p value< 0.05 was considered as statistically significant.

Assessment of Patients According to the Presence or Absence of IONM

Age, gender, and BMI were similar in both groups. There was also no difference between postoperative complication rates and resected weight of the thyroid gland (p> 0.05) (Table 1).

Table 1. Comparison of patient demographics in the groups

Table 2. Evaluation of the patients according to the experience level of the surgeon

Nerve palsy and hypoparathyroidism are the most common surgical complications of thyroidectomy. There are many factors affecting the risk of possible nerve injury. Amount of resection, nature of thyroid disease, such as Graves’ disease, retrosternal goiter, and malignant diseases, and surgeon experience are among them (1-3). Experienced surgeons also report RLN injury and paralysis in approximately 1%-2% of cases (1-4,8). Paralysis may be caused by too much skeletonization of the nerve, disruption of anatomic integrity, thermal injury, excessive traction of the nerve causing axonal injury, hematoma due to bleeding, edema, and forced intubation. The rates of nerve injury have declined over the last couple of decades owing to nerve identification during operation. Currently, this is the most applied approach by endocrine surgeons (1-4,8,9).

Between 1882 and 1898, Theodor Kocher decreased his operative mortality down to 0.18%, which was as high as 14.8% before. He even managed to decrease his recurrent nerve injury rates to the levels of today’s surgeons with his meticulous dissection technique (23). In 1938, Lahey dissected and visualized the RLN in practically every case he operated on. He reported that careful dissection and visualization of the RLN reduced the amount of injuries (24).

In the literature, nerve palsy rates vary from < 1% to 20% despite meticulous dissection techniques (1-3). In some operations, identification of the nerve can be challenging. Redo surgeries, surgery for malignant diseases, anatomical variations, such as non-recurrent nerve, large retrosternal goiters, and inflammation, or radiation history may cause difficulties in the identification of the nerve (1-4).

Identification of the RLN and monitoring its functions during surgery has been made possible through various medical devices developed during the last 20 years (9). Several methods, such as cricoarytenoid muscle palpation while stimulating the nerve, direct or fiber optic laryngoscopy observation of the vocal cords, or vocal cord electrodes, have been described (12-14). However, the most commonly used method among all is the NIM (17,18). In the NIM system, vocal cord electrodes are fixed on the endotracheal tube itself. Thus, there is no need for specific skills or surgical experience; on the other hand, there is a need for skilled anesthesiologist to place the electrodes correctly in regard with the vocal cords (9,11,17,18).

There is recent evidence in the literature stating that neuromonitoring can help dissection and visualization of the RLN (11,12,15-19). However, it is still debatable how effectively NIM can reduce RLN injury rates and predict postoperative nerve function (20-22). In a multicentric large study (16.448 patients with 29.998 nerves at risk), Dralle et al. (11) have revealed no significant difference between visual identification of the nerve and visualization with RLN neuromonitoring. Nonetheless, when the subgroups were evaluated in detail, it revealed a significant decrease in the incidence of permanent RLN palsy in low-volume surgeons who use IONM (11). In addition, being able to identify the nerve before visualization may cause a significant reduction in transient RLN palsy rates (6).

Some researchers have shown that neuromonitoring can be helpful in resident training by means of anatomical identification of the nerve (12-16). In our series, there was a clear benefit of RLN monitoring in surgeries performed by residents. In the non-IONM group, there was a statistically significant difference in RLN palsy rates between residents and experienced surgeons (p= 0.001), but in the IONM group, the rates were similar. The RLN palsy rates decreased to the levels comparable with experienced endocrine surgeons when neuromonitoring is used by residents. There was no difference between hypoparathyroidism rates in both groups.

The major disadvantage of this system is that it is very costly. It is clearly more expensive than the conventional technique. In addition, in our study, duration of the operation is significantly lower with IONM, but this shortening might not have great clinical impact.

The limitation in our study is, that the operations performed by four resident and three experienced surgeons. Therefore, one-to-one matching could not be performed.

As most surgeons try to protect the nerves during surgery, we do not think that IONM is an alternative to visual nerve identification, but it may find itself a role as an adjunct to visual identification. Although it may seem to reduce the duration of operation in our series, the major benefit is for less experienced surgeons. IONM significantly decreases RLN palsy rates of surgeons with limited experience in thyroid surgery.

Ethics committee approval was received for this study from the institutional Ethics Committee of İstanbul University, İstanbul Medical Faculty (762/2007).