Endometriosis affects the women during reproductive period and can cause functional disorders. Sometimes general surgical intervention is necessary because of disease boundary. Especially the sigmoid colon and rectum are affected due to the close neighboring. In such a case, treatment must be individualized according to the patient and symptoms. If the lesion has penetrated the entire bowel wall, bowel resection may be inevitable. Laparoscopic resection of the sigmoid colon or rectum can be performed safely in this situation. When laparoscopic resection cannot be possible because of technical difficulties, open resection may be performed for treatment. Here we present two cases, one open and one laparoscopic colon resection performed due to endometriosis.

Endometriosis, the presence of endometrial cells outside of the uterine cavity, is a benign condition which affects women during the reproductive period (1). This disease affects approximately 10 % of the general population, and 25%-50% of the infertile women suffer from this condition (2,3). Treatment must be individualized according to the patient’s age, fertility status, symptoms and extensity of the disease. Full-thickness excision, shaving or resection are the treatment of choice in case of bowel involvement. This study aimed to present two cases of deeply infiltrative endometriosis treated by hysterectomy, oophorectomy, and anterior resection due to bowel involvement which causes luminal narrowing. 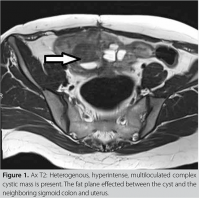 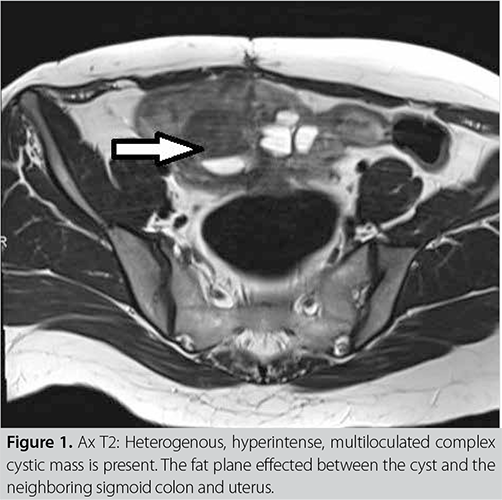 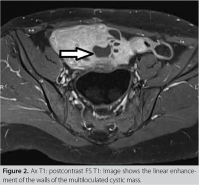 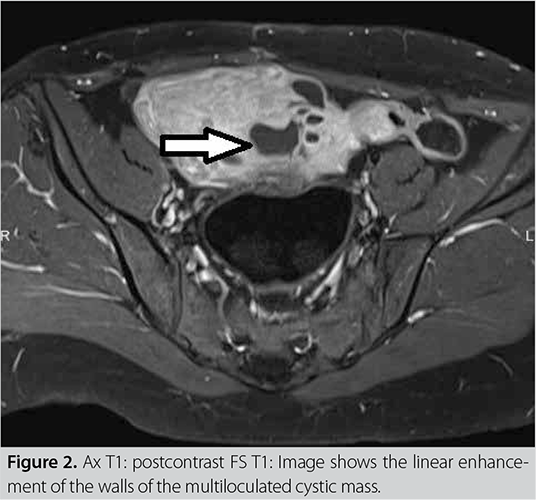 As the patient stated that she had completed childbearing and desired voluntary sterility, total abdominal hysterectomy, bilateral salpingo-oophorectomy and anterior resection were performed. Patient’s postoperative course was uneventful and was discharged from hospital postoperative on the sixth day. The pathology report was compatible with endometriosis invading the serosa, subserosa and muscular layers of a colon. Colonic mucosa was intact. One year after surgery, the patient has no complaints.

A 42-year-old female was admitted to the gynecology clinic because of a recently diagnosed right ovarian cyst. Laparoscopic right oophorectomy and bilateral salpingectomy were performed. Pathology result was endometriotic cyst for all specimens. Six months later, colonoscopy was performed due to constipation and bowel habit changes, and luminal restriction due to extrinsic compression was diagnosed. The colonoscope could not pass this restricted segment (Figure 3). 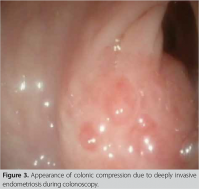 Figure 3. Appearance of colonic compression due to deeply invasive endometriosis during colonoscopy.
× 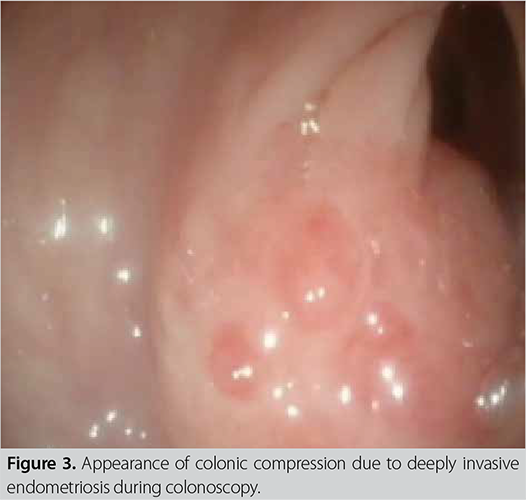 Magnetic resonance imaging showed loculated endometriosis focus which pushed the uterus anteriorly to a close neighboring with the colon (Figure 4,5). 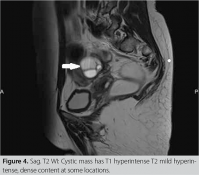 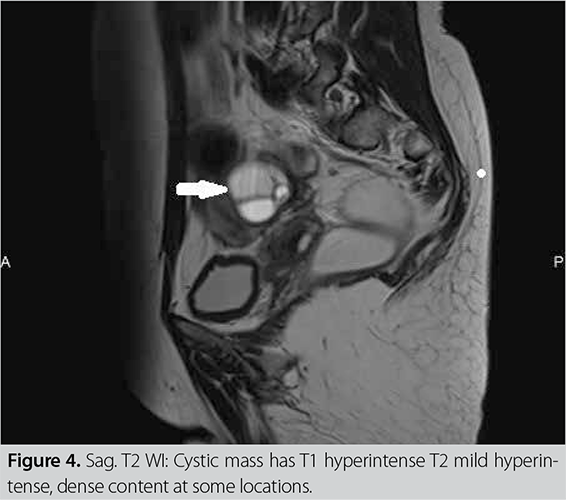 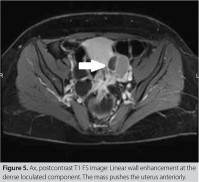 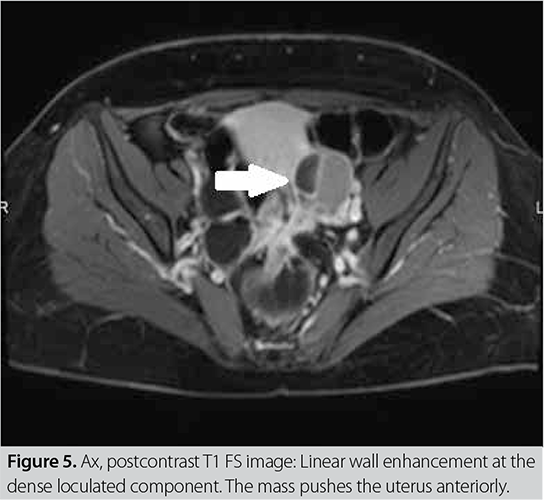 As the patient stated that she had completed childbearing and desired voluntary sterility, laparoscopic hysterectomy, left oophorectomy and anterior resection were performed. Patient’s postoperative course was uneventful and was discharged from hospital six days after surgery. Eight months after this operation, the patient was operated on for acute cholecystitis because of a recently diagnosed gall bladder stone, and during laparoscopic exploration, no endometriosis foci were present. The patient has no complaints two years after surgery. Pathology of the patient reported as endometriosis restricting the colon lumen at two different points.

Informed consent obtained from both of the patients.

DIE is defined as the infiltration of the peritoneum more than 5mm (4). Pelvis is the most-frequent location and approximately 24% of the patients have sigmoid colon or rectum involvement (5). This disease can cause different symptoms, and treatment must be individualized according to symptoms, clinical condition and fertility status (6). Menstrual irregularities, dysmenorrhea, dyspareunia, chronic pelvic pain, mictalgia, and dyschezia are the main symptoms of deeply infiltrative endometriosis. In conjunction with these symptoms, involvement of the colon or rectum can cause functional disorders. Constipation, tenesmus, rectal bleeding or intestinal obstruction are some of these disorders which can be associated with bowel involvement (1,7,8).

Surgery is a suppressive treatment for endometriosis if ovaries are left producing estrogen. Estrogen is the fuel of endometriotic focus. During the reproductive period, endometriosis tissue continues to grow if no hormonal treatment is applied. Its hormonal suppression using continuous dienogest or cyclic combined drospirenone and ethinyl estradiol is another option for treatment which also supports surgical therapy.

Endometriosis disease has 4 stages which produce obliterated cul de sac at stage 4. Endometriotic tissue at the rectovaginal septum is responsible for dyspareunia during intercourse. The probability of colonic involvement is high during stage 4 disease.

Stage 4 endometriosis may also affect the urinary tract in addition to the bowel involvement supporting a multidisciplinary approach for deep endometriosis surgery which includes gynecologist, general surgeon, and urologist.

Decision to perform surgery for DIE mainly clinical (4). Relieving pain and maintaining fertility with low recurrence rates are the main goals of endometriosis surgery for women during their reproductive period. However, for patients who have already completed childbearing, hysterectomy with or without bilateral salpingo-oophorectomy can be considered as an option for treatment (9). Although there is no guideline for patient selection or optimal treatment for DIE with colonic involvement full thickness excision, shaving or bowel resection are possible treatment modalities to remove the endometrioid foci and improve clinical outcome of the functional disorders (10-12). Clear indication of performing shaving or resection surgery is a matter of debate for centers of excellence studying endometriosis surgery. Although complication rates of bowel resection especially for lower rectal resections are higher, bowel resection can be suitable for lesions greater than 30 mm which cause obstruction or involve more than 1/3 of the intestinal circumference (13). Laparoscopic sigmoid colon or rectal resection is possible and can be combined with gynecologic procedures safely.

Treatment of deeply infiltrative endometriosis with colonic or rectal invasion may be problematic. There is no guideline present for patient selection or treatment options in case of colonic or rectal invasion. Colon resection, laparoscopic or open may be performed in conjunction with hysterectomy and bilateral salpingo-oophorectomy for the selected patients who complete childbearing.

There is no conflict of interest for this study.

No financial support received for this study.