Esophagoduodenoscopy or colonoscopy: which should be done first?

Conclusion: Regarding shorter procedural duration, lower consumption amount of propofol and fewer complications, it could be a better choice to start bidirectional procedure with colonoscopy first.

Bidirectional endoscopy (BE) consists of esophagoduodenoscopy (EDS) and colonoscopy, which are done at the same session on the same day. BE is an important tool to diagnose nonspecific symptoms as iron deficiency, positive fecal occult blood test, suspected gastrointestinal system (GIS) malignancy, stomachache, abdominal distention and weight loss (1,2). Completing the procedure in the same session shortens not only hospital stay, but also reduces risks related to anesthesia (3). Usually, it is the endoscopist’s choice from which side to start, EDS or colonoscopy. There is still no agreement between the endoscopists on whether to begin bidirectional endoscopy from EDS or colonoscopy first (4-6).

Nowadays, sedation is preferred for endoscopic procedures (7). Propofol application watched by an anesthesiologist for sedation provides a fast onset time and fast recovery in comparison to other anesthetic drugs (8).

The aim of this study was to determine whether EDS or colonoscopy should be done first, and as a result, to determine the optimal order for BE.

This study was a prospective, randomized and controlled study, which started after receiving local ethics committee approval (28.05.2013/197) and obtaining patient’s informed consent in our Endoscopy Unit, and it was completed in a 6-month period.

Eighty patients scheduled for BE aged 18-70, with an American Society of Anesthesiologists Classification (ASA) as I-III, were included in this study.

Patients with active GIS bleeding, severe cardiac and respiratory failure, propofol or fentanyl allergy, alcohol or drug addiction, neuropsychiatric disease, suspicious of difficult airway and patients, who could not complete the screening because of inadequate colon cleaning or obstruction because of colon cancer were excluded.

For endoscopic procedures (Olympus® EVIS EXERA Video Gastroscope GIF-160; Olympus Switzerland AG, Volketswil 8604, Switzerland) endoscope and Olympus® CF Q160L/I/S; Olympus Switzerland AG, Volketswil 8604, Switzerland) colonoscopes were used. Insufflation was done with room air. Prior to each procedure, disinfection and drying were carried out after mechanical cleaning of the gastroscope and colonoscopes on separate washing machines. Endoscopists wore protective equipment such as aprons and gloves before the procedure. They changed their aprons and gloves when they passed from gastroscopy to colonoscopy and from colonoscopy to gastroscopy.

Patients were advised to starve for a 12-hour period, to take laxatives the day before endoscopy appointment and to administer enema for gut cleaning. Patients were also warned not to take alcohol or any sedative drugs.

Patient’s informed consent was obtained when the patient was admitted on the day of endoscopy. All procedures were performed in the endoscopy unit. All patients were inserted an intravenous (IV) catheter sized 22 Gauge and transfused 0.9% NaCl. Then they were prepared for the endoscopy procedure in a lateral decubitus position and monitored with electrocardiography, noninvasive blood pressure measuring and pulse oximetry. Oxygen supply was provided by a nasal cannula with a flow of 3-4 L/minute oxygen. Initial heart rate (HR) and saturation (SpO2) were recorded. All patients received premedication with 1 mg midazolam (Dormicum®; DEVA pharm, Istanbul, Turkey) intravenously. The oropharyngeal was topically anesthetized with 3 puffs of lidocaine 10% (Xylocain® 10% spray; AstraZeneca, Istanbul, Turkey) spray. Deep sedation was provided by the same two anesthetists with 1 mcg/kg fentanyl citrate (Fentanyl® amp; Abott laboratories, North Chicago, USA) and 1 mg/kg propofol 1% (Propofol® 1%; Fresenius, Graz, Austria). Sedation depth was achieved to be Ramsey Sedation Score (RSS, Appendix 1). Additional propofol doses of 0.5 mg/kg were given when RSS was under 3 and recorded. RSS scores were also recorded during the procedure.

Total procedure duration was the time from beginning of anesthesia induction until end of BE procedure. Total procedure duration, EDS and colonoscopy durations, additional preparation time including time from the end of a procedure until the beginning of the next procedure were recorded. Complications related to the interventions or to anesthetic management were recorded all over the procedure duration and recovery period. Recovery period was defined as time from beginning of anesthesia induction to recovery to Aldrete score 9 (Appendix 2). Endoscopist’s and patient’s satisfaction were evaluated with a visual analog scale (VAS) score (1: very bad, 10: very good). When patients received an Aldrete score of 9, they were transported to the recovery room and observed for one hour before discharge.

Totally 80 patients of ASA I-III, aged between 18-70 years, scheduled for BE were included in this study (Appendix 3). There was no statistically significant difference in demographical data between the groups. Frequency of retching at the oropharyngeal placement of the endoscope was not statistically significant different between the groups. Colonoscopy duration was not statistically significant different between the groups (p= 0.131). EDS was prolonged in Group G (3.22 ± 1.31 for group C and 4.1 ± 1.85 min for group G, p= 0.016), and the total procedure time was prolonged in Group G, as well (15.21 ± 3.15 for group C and 16.64 ± 2.53 group G, p= 0.028). Complications occurred in 6 patients in Group G (p= 0.011). One patient suffered an allergic reaction treated with antihistamines, one patient had bradycardia (HR < 50 beats per minute for 30 seconds) treated with 0.5 mg atropine, four patients had hypersalivation and one patient was desaturated (SpO2 < 90%) because of hypersalivation. No complication was observed in Group C (Table 1). 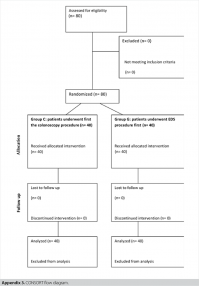 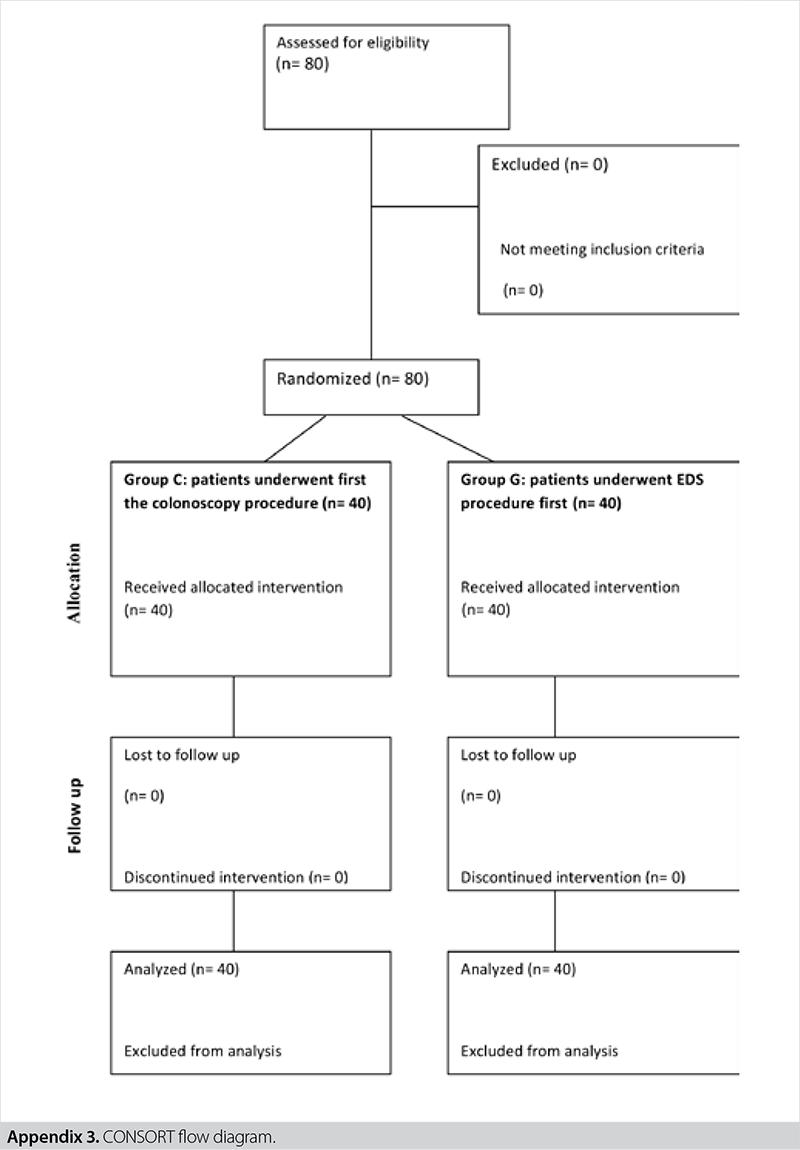 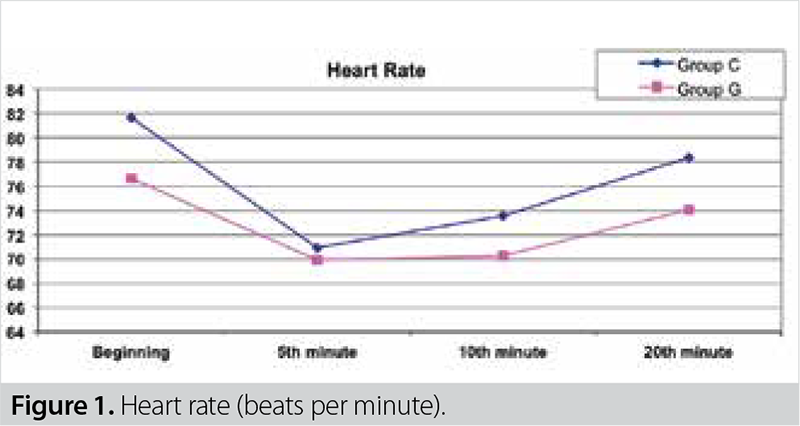 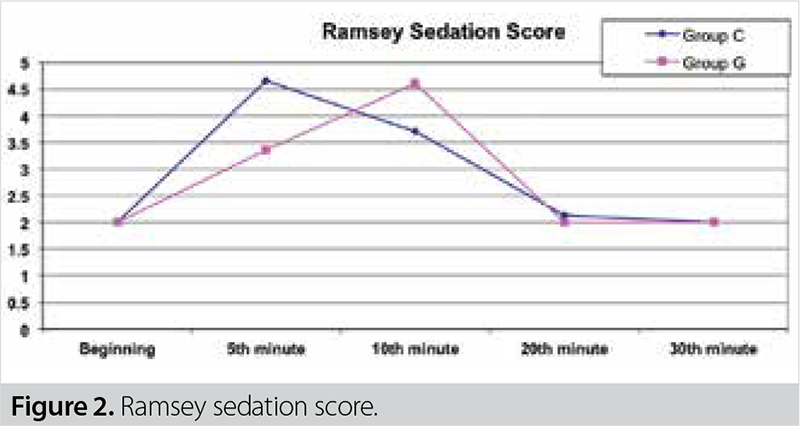 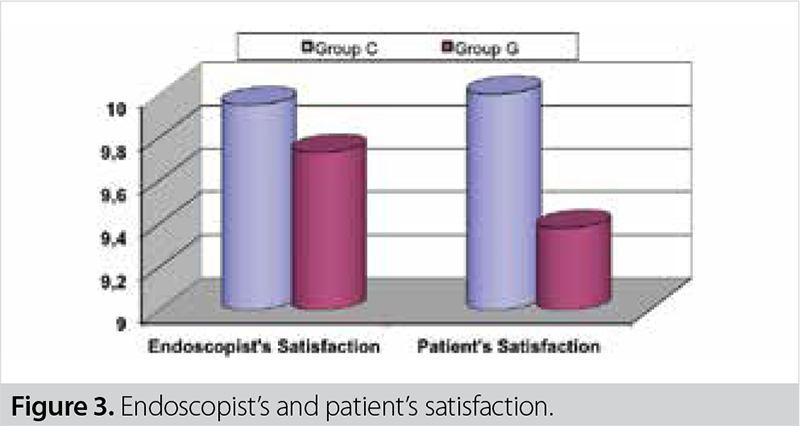 Total consumption of propofol was not statistically significantly different between the groups. However, Group G received a higher amount of propofol dosage than Group C (145.88 ± 25.39 for group C and 154.63 ± 28.85 for group G, p= 0.154). All procedures were successful in reaching the cecum. Time to reach the cecum was not statistically different between the two groups (Table 3).

BE includes lower and upper GIS endoscopy (colonoscopy and upper endoscopy) proceeded the same day and the same session. Although there is insufficient data regarding indications and frequency of application of BE, iron deficiency anemia, fecal occult blood, dyspepsia and/or pain are the most important indications (1,2).

Currently, most endoscopic procedures are performed with sedation. Use of sedation improves success of the procedure, and patient’s and physician’s comfort, as well (7,8). Additionally, it lowers stress hormone levels (9). For this purpose, benzodiazepines, meperidine and propofol are commonly used. Due to the advantages such as rapid onset of action and providing short-term anesthesia, propofol is the most commonly preferred anesthetic agent for endoscopic procedures in recent years (7,8). In a study performed in our clinic and comparing the use of propofol-fentanyl, propofol-alfentanyl during colonoscopy, the need for additional propofol dose has been found lower and recovery more rapid in the propofol-fentanyl group (9,10). Therefore, we also preferred to administer propofol-fentanyl combination for sedation in our study.

In our study, we used RSS for the evaluation of the sedation level. It could also be benefited from Bispectral Index Score (BIS) to measure the depth of sedation and reduce the use of sedative drug. There are studies comparing the use of RSS and BIS (11,12). In these studies, it has been emphasized that BIS is a suitable monitorization tool for the patients under sedation and over-sedation and complications related to over-sedation could be prevented by BIS (11,12). However, there are studies indicating that measurements of RSS and BIS are consistent, the amount of sedative drug use does not change (11,12). Not using BIS can be considered the weakness of our study. Which of the examinations (gastroscopy and colonoscopy) will be performed first in BE usually depends on the preference and experience of the endoscopist. While some endoscopists believe that performing gastroscopy first makes the colonoscopy procedure more difficult due to gas insufflation, some endoscopists think that performing colonoscopy first makes the gastroscopy procedure more difficult due to increased bowel motility and the external pressure of the colon on the stomach. However, in recent years, this condition has also been the subject of studies despite in limited number, and it was studied on procedure priority regarding many issues such as procedural success, procedure duration, complications and consumption of sedative agents used (4-6).

In the study performed by Carter et al. (14) on 163 patients undergoing bidirectional endoscopy with conscious sedation using i.v meperidine and midazolam, procedure priority of gastroscopy and colonoscopy has been investigated. They have determined no significant difference between two procedures regarding procedure duration, procedural success, the time to reach the cecum, recovery period, need for additional midazolam, pain scores and patient satisfaction. In our study, while endoscopist and patient satisfaction scores were higher in both groups, patient satisfaction and physician satisfaction were found to be better in the group undergoing colonoscopy first.

In our study, performing procedures at the same session may cause concerns about contamination, especially when the colonoscopy is implemented before gastroscopy group. Endoscopic infections can be divided into two types: endogenous and exogenous infections. Endogenous infections are most common in endoscopic procedures. This is related to factors such as the patient’s immunosuppression or abscess existence. Exogenous infections are less common and can be prevented by endoscope cleaning, disinfection and drying according to a strict protocol. In bidirectional endoscopy, there is no data showing the relationship of the procedure sequence with the infection. We also paid attention to the cleaning of the endoscope in accordance with the recommendation of the guidelines (15,16). In addition, endoscopists changed their aprons and gloves from gastroscopy to colonoscopy and from colonoscopy to gastroscopy. Although there was one of the follow-up parameters absent in our study protocol, no process related infection was reported. However, this subject can guide future studies.

In conclusion, performing colonoscopy first followed by gastroscopy in BE can be preferred since gastroscopy and procedure have a short duration and complication rates and additional propofol doses are lower. However, large-scale studies are required to reply the question, “which one of gastroscopy and colonoscopy should be performed first in bidirectional endoscopy?” regarding anesthesia and procedural success.

Informed consent form was obtained from all patients.

The authors have no conflicts of interest.