Material and Methods: The study was carried out on 32 patients treated by curative surgery and lateral lymph node dissection at the Iran Cancer Institute from 2016 March to 2018 March. Chi-square test was used to assess the distribution of dichotomous clinical outcomes by sex. We also used Breslow test in Kaplan-Meier approach to estimate 1-year disease free survival and corresponding 95% confidence intervals (CI).

Conclusion: TME with LLND could prolong survival and reduce local recurrence in patients with advanced low rectal cancer. However, large-scale clinical trials are required to evaluate such procedure as a standard in Iran.

Total mesorectal excision (TME) is known as the standard treatment for advanced low rectal carcinoma. It is reported that adoption of TME could be of benefit for patients with low rectal carcinoma (1-3). TME could decrease local recurrence and increase survival. Previous studies have supported the effectiveness of TME. However, it is reported that 5-40% of low rectal cancer patients having undergone this technique experience local recurrence after surgery and prognosis in such patients still remains poor (4-6).

It is supposed that poor prognosis of low rectal carcinoma is mainly due to metastasis of lymph nodes outside of the TME field (6-8). Dissection of lateral pelvic lymph nodes is a complementary approach that can be considered as an important fact or to reduce local recurrence and extending low rectal cancer patients’ survival. This hypothesis has been investigated in several studies. However, the role of lymph node dissection in terms of prolonging survival of advanced case of low rectal carcinoma is still disputed. In some studies lateral lymph node dissection (LLND) has not depicted survival benefit for low rectal cancer patients, while more recent large scale researches provided supporting evidence for the benefit of LLND (9,10).

The current research was a case-series study, carried out on 32 eligible patients with advanced stages of lower and mid-rectal cancer (stage 2 and 3) who were treated by TME plus LLND at the Iran Cancer Institute. The eligibility criteria included: All patients with stage 2 and 3 of lower and mid-rectal cancer, referring to Iran Cancer Institute from 2016 March to 2018 March who agreed to participate in our study. The exclusion criteria included: metastatic, high rectal and rectosigmoid cancers and unwillingness to participate in the study. The methodology of the study was reviewed and approved by the medical ethics committee of Tehran University of Medical Science (Approval ID: IR.TUMS.VCR.REC.1397.629-Certificate available on demand). Before the study, we assessed whether the patients were eligible to perform LLND according to physical examination, colonoscopy and abdominopelvic and thoracic computed tomography (CT) as a metastasis workup. Prior to study initiation, a written informed consent, addressing that patients could exit the study at any desired time, without negative impact on their future treatment procedure, was completed by each one of them.

In the study group, all patients received chemoradiotherapy as neoadjuvant treatment. All surgical operations were performed using standard open laparotomy with mid-line incision. In the LLND technique, bilateral extraction of para-iliac and obturator lymph nodes was performed (from iliac artery bifurcation to obturator nerve). In order to minimize post-operative complications, complete neurovascular and ureteral exploration was performed for all patients. After surgery, we counted the number of total dissected and positive lymph nodes to estimate LNR. All study participants were actively followed-up for 1 year after surgery and in each post-op examination, we looked for local recurrence, sexual and urinary disorders and death.

In the first year following surgery, for each studied patient, carcinoembryonic antigen (CEA) level was screened every three months. At the end of the first year, colonoscopy and double-contrast thoraco-abdomino-pelvic CT scan was performed on all of the studied patients. In general, lymph node dissection associated complications was observed in one male patient with impotency. Respective number was 0 in females (p= 0.910). Higher local recurrence was observed in men (three patients) compared to women (one patient) which was not statistically significant (p= 0.878). We also observed higher 1-year disease free survival rate in women (93.3%) compared to men (82.4%), which again, was not statistically significant (p= 0.356). In addition, 1-year disease free survival was calculated for patients with negative and positive lateral lymph nodes. 1-year disease free survival rate in patient with negative lymph nodes was 95.5% while respective number in patients with positive lymph nodes was 70% (p= 0.047) (Figure 1). Neither any unexpected bleeding during surgery nor any post-op hematoma or urinary complications were observed in participants. 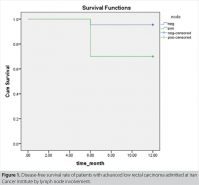 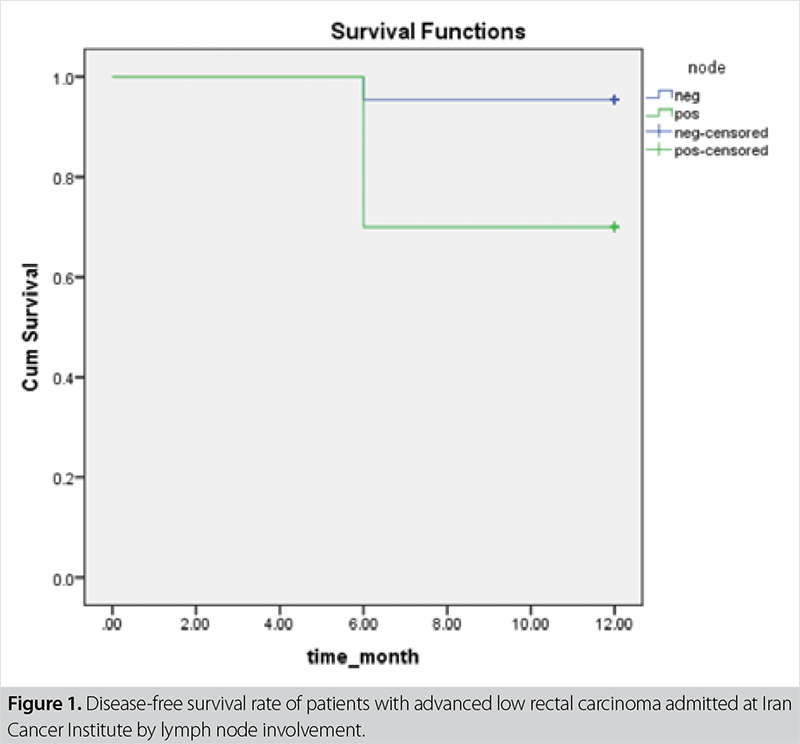 Lateral pelvic lymphadenectomy is one of the treatments for patients suffering from advanced low rectal cancer. However, a universal agreement about its effectiveness is still lacking and there is no global agreement on whether lymph node dissection could be beneficial for low rectal cancer patients or not. Therefore, different approaches to such patients are used among surgeons worldwide. For instance, lateral pelvic lymphadenectomy is being used as arecommended treatment in Japan, while it is not frequently performed in western societies (6,11-13).

The percentage of 1-year disease free survival for patients treated by TME and LLND and was 87.5% in our study. Although this number was partially higher in women than men, no statistically significant difference was observed. This finding is consistent with previously performed studies as well (19-21).

We examined 232 lateral lymph nodes, seven of which were positive for metastasis (3.0%). This findingis substantially lower compared to the previous studies, reporting lateral pelvic lymph node involvement from 38.0% to 71%. This could be the result of neoadjuvant chemoradiotherapy all of the studied patients received prior to surgery. We were unable to find any other attributable factors to the low number of positive lymph nodes in our cases. Therefore, this finding needs further testing in future studies. In addition, in recent studies, lateral lymph node (LLN) involvement rate has been reported 14.6% and 19.1% (Wu and Yokoyama), which is closer to our results (6,18). Positive LLN is associated with increased risk of local recurrence, which consequently reduces survival in advanced low rectal cancer patients (6). There is some evidence indicating that LLND provides better outcomes regarding both local recurrence and survival in patients diagnosed with negative lateral pelvic lymph nodes (6,7,18,19). Sugihara et al. have reported a significant difference in 5-year survival rate after surgery in patients with negative and positive lymph node dissection (7). Our current study also showed asignificantly higher 1-year disease free survival rate in negative lymph node patients (95.5%) compared to patients with positive LLN (70%), which is compatible with previous studies (7,8).

Lymph node dissection is not a procedure without complication. It generally increases operation time and blood loss. Hence, patient selection for LLND must be regarded as an important factor to receive better results in terms of both local recurrence and survival rate in low rectal cancer patients (18).

We encountered some limitations in our study which should be considered while interpreting the results. First of all, small number of study participants along with short follow-up time might have resulted in overestimated survival rates in patients who had TME + LLND. Secondly, as the current study was a case-series, there was no comparison group. Therefore, we believe that the findings of this study should be reevaluated in future clinical trials, as there are alternative treatments for advanced low rectal cancer including mere TME and preoperative chemoradiotherapy.

The methodology of the study was reviewed and approved by the medical ethics committee of Tehran University of Medical Science (Approval ID: IR.TUMS.VCR.REC.1397.629-Certificate available on demand).