The ectopic stomach mucosa island in the proximal esophagus, which is generally known as the inlet patch or cervical inlet patch, is called as the heterotopic gastric mucosa of the esophagus. Despite its asymptomatic progress, it may cause chest pain, shortness of breath and difficulty in swallowing due to the acid secretion from the ectopic mucosa. The study aimed to present a patient who underwent coronary angiography with an unstable angina pectoris diagnosis by cardiologists for gastric chest pain but found an inlet patch in gastroduodenoscopy.

The heterotopic gastric mucosa (HGM) of the esophagus, also known as the inlet patch (IP), is a clinical entity described first in 1805 by Schmidt as the ectopic gastric mucosa located in the proximal esophagus (1). In the reported endoscopical studies, the incidence varies from less than 1% to 13.8%. This rate increases to 70% in autopsy studies (2,3). Although IP is generally considered as congenital, there are also those who think that it is acquired (4,5).

Although most IPs are asymptomatic, they can cause chest pain and shortness of breath when they are acid-releasing (6). IP should be considered in the differential diagnosis of patients with chest pain complaints.

A 42-year-old male patient applied to our policlinic with complaints about cough, back pain and burning in stomach and throat ongoing for a long time. The patient said his complaints diminished after drinking anti acid syrups. The patient, who underwent in-depth anamnesis, said he applied to the emergency service of our hospital a week ago with severe chest pain, shortness of breath and excessive sweating. The patient did not have any underlying diseases and he smoked 2 packs of cigarettes a day and as his father also had a story of heart attack. The patient’s enzyme and troponin were inspected at the emergency service. Although the results were normal and there was no problem in his electrocardiography, he was diagnosed with unstable angina pectoris and he was given urgent coronary angiography by the cardiology unit. The patient who had no problem following the treatment was discharged on the next day.

Upon this, after the patient was interviewed and the consent was obtained for gastroduodenoscopy, the procedure was performed under mild sedation. In gastroduodenoscopy, there were areas with erythema and oval-shaped, flat, velvety mucosa with approximately 0.5 x 1 cm of perimeter in the esophagus at 20 cm, which was separated from the peripheral esophageal tissue by sharp borders (Figure 1), and biopsy was taken from here. As there was doubt about the heterotopic gastric mucosa in the esophageal lesion and antral gastritis in the patient, proton pump inhibitor was administered to the patient. Pathologic result was chronic gastritis with mucous and parietal cells, and Helicobacter pylori were not observed in histology similar to the stomach corpus (Figure 2). These endoscopic and pathologic findings reminded us of HGM, to name in other words the IP, as the diagnosis. 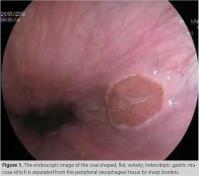 Figure 1. The endoscopic image of the oval-shaped, flat, velvety, heterotopic gastric mu- cosa which is separated from the peripheral oesophageal tissue by sharp borders.
× 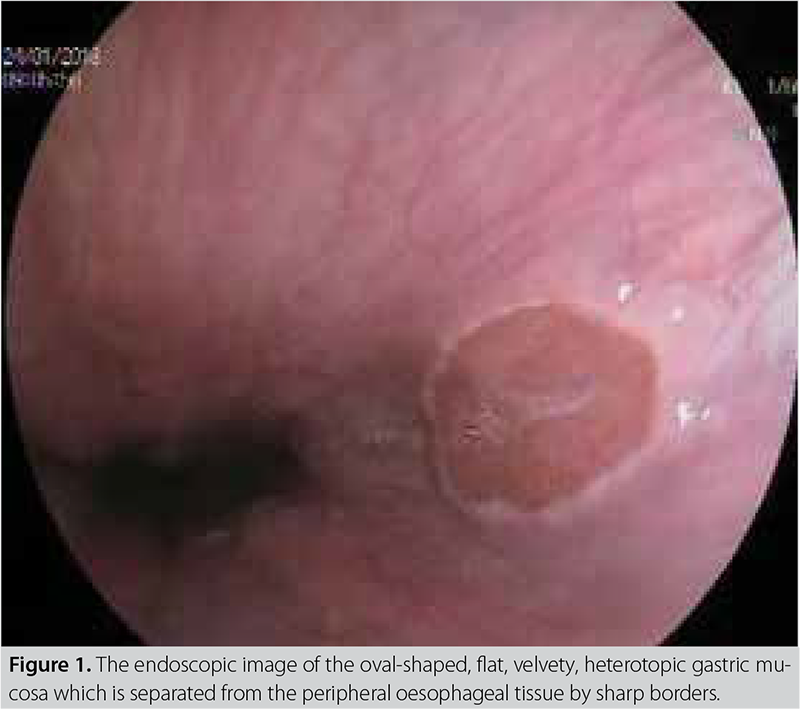 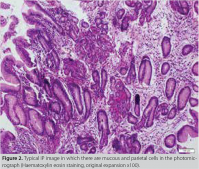 Figure 2. Typical IP image in which there are mucous and parietal cells in the photomic- rograph (Haematoxylin eosin staining, original expansion x100).
× 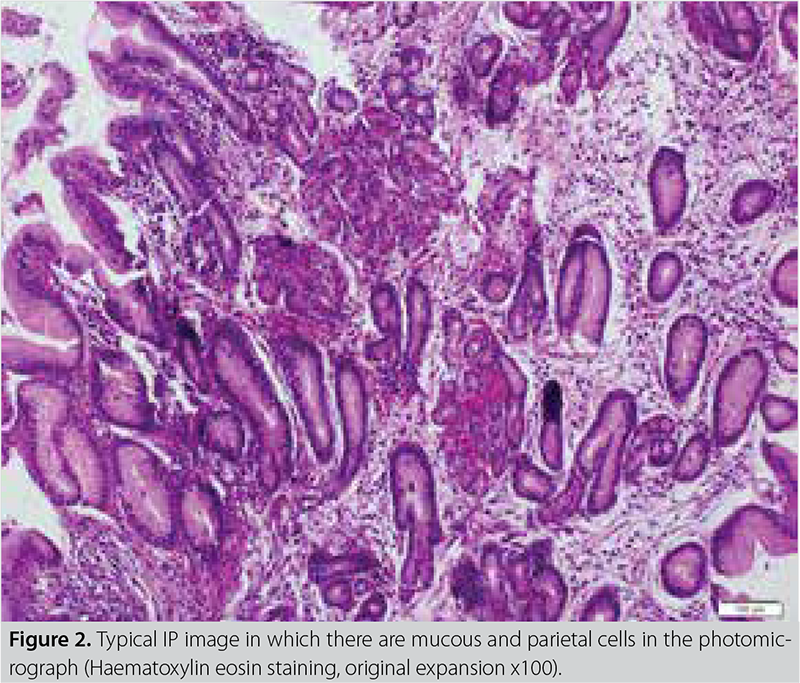 Heterotopic gastric mucosa might be raised slightly from the surface, collapsed from the surface or flat, smooth surface or nodular. Microscopically, it is salmon-colored and velvety in appearance, changing from 2-3 mm to 4.5 cm in size. It can be seen as a single piece or multiple pieces separated from the normal mucosa by sharp boundaries (7). We also conducted a biopsy with the pre-diagnosis of IP as we saw a smooth velvety area, separated by a sharp boundary from the mucosa in the 20th cm as described above while we were performing gastroduodenoscopy to our patient.

The most common histologic type of IP is cardia or oxyntic type of mucosa, and acid production can also be seen from the current gastric mucosa in some phenomena according to the type of the mucosa below. In some patients, laryngopharyngeal reflux is caused by the proximity to the upper esophageal sphincter (8). Helicobacter pylori colonization in IP is described up to 82% in some studies. Apart from that, atrophy, metaplasia, dysplasia and even carcinoma of HGM are described (9,10). In the pathology result of our patient, cells similar to the stomach corpus were observed and helicobacter pylori and intestinal metaplasia were not observed.

Many of the cervical IPs are asymptomatic; however, esophagitis, ulcer and web, which are associated with acid secretion, and pain in the chest and throat, dysphagia, sensation of globus and dyspnea -as a result of contraction in the esophagus- may develop (6). Probably, our patient developed esophageal irritation dependent on acid secretion and in turn reflux symptoms and pain in the chest. Recurrent unstable angina pectoris symptoms of our patient lead cardiologists to coronary angiography. We are of the opinion that this case is important to expand the awareness of IP and evaluation of differential diagnosis of esophageal diseases in patients with angina pectoris by emergency physicians and cardiologists.