Objective: In gastric cancer, laparoscopic gastrectomy is commonly performed in Asian countries. In other regions where tumor incidence is relatively low and patient characteristics are different, developments in this issue have been limited. In this study, we aimed to compare the early results for patients who underwent open or laparoscopic gastrectomy for gastric cancer in a low volume center.

Material and Methods: We retrospectively analyzed the data of patients who underwent curative gastric resection (open gastrectomy n: 30; laparoscopic gastrectomy n: 30) by the same surgical team between 2014 and 2019.

Results: The tumor was localized in 60% (36/60) of the patients in the proximal and middle 1/3 stomach. In laparoscopic gastrectomy group, the operation time was significantly longer (median, 297.5 vs 180 minutes; p< 0.05). In open gastrectomy group, intraoperative blood loss (median 50 vs 150 ml; p< 0.05) was significantly higher. Tumor negative surgical margin was achieved in all cases. Although the mean number of lymph nodes harvested in laparoscopic gastrectomy group was higher than the open surgery group, the difference was not statistically significant (28.2 ± 11.48 vs 25.8 ± 9.78, respectively; p= 0.394). The rate of major complications (Clavien-Dindo ≥ grade 3) was less common in the laparoscopic group (6.7% vs 16.7%; p= 0.642). Mortality was observed in four patients (2 patients open, 2 patients laparoscopic).

Conclusion: In low-volume centers with advanced laparoscopic surgery experience, laparoscopic gastrectomy for gastric cancer can be performed with the risk of morbidity-mortality similar to open gastrectomy.

Gastric cancer is one of the most common cancers in the world. Although its incidence has decreased today, it is still the third most common cause of cancer-related deaths (1). The only potential curative treatment option in gastric cancer is gastrectomy with lymph node dissection (2). Laparotomy, which is the classical approach, carries serious risks for morbidity, mortality and impaired quality of life (3,4). Therefore, techniques that can reduce these potential disadvantages and risks of the classical approach attract the attention of surgeons in the treatment of gastric cancer.

Laparoscopic gastrectomy was first reported in 1994 by Kitano et al. (5). Since then, laparoscopic gastrectomy has continued to be performed increasingly all over the world, mainly in Asian countries. The effectiveness, feasibility and oncological adequacy of the technique have been demonstrated in various studies (6-8). The majority of these studies are from Asian countries where tumor incidence is high, the tumor is diagnosed at an early stage and a young age with screening programs and cancer surgery is performed in specialized centers (6-8). The experience of laparoscopic gastrectomy is limited in European countries where tumor epidemiology and patient characteristics are different (9,10).

Geographically, Turkey is the crossroads of Europe and Asia. Parallel to that, the incidence of gastric cancer, tumor and patient characteristics are also somewhat between the European and Asian communities (11). In addition, gastric cancer surgery is also performed outside of specialized centers in our country. This situation, together with the relatively low tumor incidence, leads to low patient volume in a single center.

In this study, it was aimed to compare the early results of patients who underwent open or laparoscopic gastrectomy (total, subtotal) for gastric cancer in our clinic and the oncological adequacy of both techniques.

After approval of the Institutional Ethics Board Committee, the data of patients who were operated consecutively for gastric cancer between January 2014 and December 2019 were collected retrospectively. The diagnosis was made by upper gastrointestinal endoscopy and endoscopic biopsy. Clinical staging was done by using contrast computed tomography (CT). Positron emission tomography (PET) was used in patients with suspected metastasis. Patients with ASA score > 3 and the patients who were operated on by different surgical teams for palliative resection were excluded from the study. Between these dates, 60 patients who underwent curative gastrectomy were included in the study. Until January 2016, open gastrectomy (Open gastrectomy group; n: 30) was performed in all patients and patients whose adjacent organ invasion (cT4b) was shown in preoperative radiological examinations. Laparoscopic gastrectomy (Laparoscopic gastrectomy group; n: 30) was applied to other potential curative patients other than these criteria.

The patients were hospitalized 24 hours before the operation. Deep venous thrombosis prophylaxis (dalteparin sodium 35 IU/kg) was started. Before anesthesia induction, all patients received prophylaxis with 2 grams of first-generation cephalosporin.

The operations (total, subtotal) were performed in a French position with five trocars. The surgical team, equipment and the location of the trocars are shown in Figure 1. A total omentectomy was performed in all cases. However, bursectomy was not performed. Lymph node dissection and total omentectomy were performed according to the following stages. The gastrocolic ligament was opened by omentectomy. In the corner of the spleen, left gastroepiploic vessels were dissected (no 4b). Right gastroepiploic vessels (no 4d) and infrapyloric lymph nodes (no 6) were dissected. Gastroduodenal artery was followed in the posterior of the duodenum, and its junction with the hepatic artery was identified. Meanwhile, a window was created for transection in the supraduodenal area. The duodenum was transected with laparoscopic 60 mm linear stapler. Supraduodenal lymph nodes (no.5) were dissected. Right gastric artery was ligated. Targeted lymph node dissection (D1+, D2) according to tumor localization and other factors (age, comorbid status, etc.) was completed as recommended in the Japanese gastric cancer treatment guidelines (2). Dissections were performed with a harmonic scalpel. Intraoperative gastroscopy was performed in all cases in order to determine the surgical margin. All reconstructions were antecolic Roux-en-Y type. In subtotal gastrectomy, standard gastrojejunostomy was performed with a 60 mm endo stapler from the posterior of the remnant stomach. Stapler spaces were closed in double-layers with continuous sutures of 3/0 prolene. Jejunojejunostomy anastomosis was performed with a 60 mm endo stapler at 50 cm distal. Stapler space was closed in double-layers with 3/0 prolene. The specimen was extracted through a suprapubic mini transverse incision. Esophagojejunostomy anastomosis in total gastrectomy was achieved with three different techniques. These were transorally inserted anvil (OrVilTM; Covidien, Mansfield, MA, USA), side-to-side with a linear stapler and transperitoneal double stapler techniques. The specimen was extracted through a suprapubic mini transverse incision in patients who underwent anastomosis with linear stapler, and from the mini-incision in the upper left quadrant where circular stapler were placed in other patients. In all patients, a drain was placed in the abdomen. 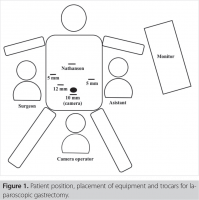 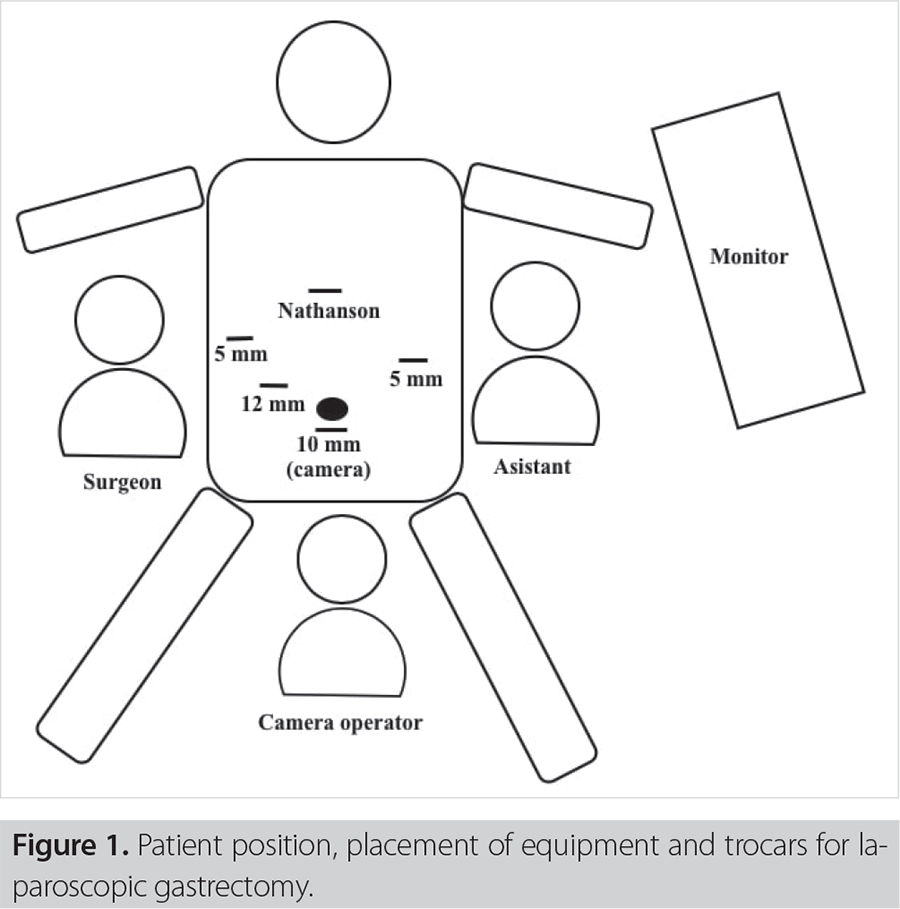 Sixty patients underwent gastrectomy with curative intent (30 open/30 laparoscopic). Thirty-eight patients were (63.3%) males and 22 (36.7%) patients were females. Mean age of the patients was 63.1 ± 11 years. The frequency of male patients was higher in the open gastrectomy group (p= 0.016). In total, 8 patients (3 open, 5 laparoscopic) received neoadjuvant chemotherapy. There was no significant difference between the groups in terms of other factors related to patients. Patient characteristics are listed in Table 1.

Laparoscopic gastrectomy for gastric cancer is a difficult and complex procedure. In Asian studies, it has been indicated that the learning curve requires a serious number of cases (50-90 cases) and is a challenging process (14,15). In our clinic, relatively few (15 patients per year) number of curative gastric resections are performed compared to Asian countries. In addition, unlike Asian countries, the majority of cases diagnosed in our clinic were found to have advanced gastric cancer (81.7%) predominantly located in the middle-proximal stomach. In our study comparing this group of patients, in LG, although the duration of surgery was longer, intraoperative blood loss was less.

The R0 resection rate and the number of lymph nodes harvested are important indicators in determining surgical quality. When the two techniques were compared in terms of surgical quality, these parameters were similar in the two groups. The absence of tactile sensation in laparoscopic surgery may cause difficulties in determining tumor localization and surgical margins. Tumor positive surgical margin rate in minimally invasive gastrectomy has been reported to be 6.9-7.5% (9,10). In our study, tumor localization and surgical margins were determined by performing routine intraoperative gastroscopy in the laparoscopic group. This approach may be the main factor in achieving tumor negative surgical margin in all cases.

Reconstruction in laparoscopic gastrectomy is one of the most difficult stages of the procedure. Unlike Asian countries, in the West, complex laparoscopic bariatric procedures are widely applied (27). These procedures provide an important experience, especially with regard to intracorporeal gastrojejunostomy anastomosis. With such experience, reconstruction was performed easily and safely in laparoscopic subtotal gastrectomy in our clinic. However, esophagojejunostomy anastomosis is a difficult and complex procedure. Many different techniques for laparoscopic esophagojejunostomy have been described in the literature (28). In our clinic, this type of anastomosis has not been standardized yet. Esophagojejunostomy was achieved with three different techniques in our study. In clinics like ours with a limited number of cases and still on the learning curve, the complexity and difficulty of this type of anastomosis should be taken into consideration.

Our results demonstrate the technical feasibility of laparoscopic gastrectomy for gastric cancer in low volume centers with advanced laparoscopic experience. However, in our study, lack of data of survival rates led to continued concerns about oncological adequacy. One of the important limitations of our study is the bias in patient selection. There are few studies in the literature regarding laparoscopic gastrectomy in adjacent organ invasive tumors (T4b) (29). This is because; disruption of normal anatomy due to invasion and abnormal neovascularization may make the laparoscopic approach difficult (30). We prefer open surgery in these patients because of the fact that we are on the learning curve and laparoscopic approach is more complex in these tumors. This is the main cause of bias in our study. In addition, the small number of patients, being a retrospective study, and the lack of data on postoperative recovery profile (pain score, quality of life, etc.) are other factors of limitation of our study.

According to the results of this study in which patients with advanced gastric cancer were operated on, laparoscopic gastrectomy for gastric cancer can be performed in low volume centers if the team is experienced in advanced laparoscopy because it does not increase surgical morbidity.