Objective: Anastomotic leak can adversely affect the outcome of surgery especially if detected late. The present study was carried out to detect the anastomotic leak early in the postoperative period using serial estimation of procalcitonin (PCT) and C-reactive protein (CRP).

Material and Methods: A single centre prospective cohort study was done on patients undergoing elective gastrointestinal surgery with anastomosis. Serial estimation of serum procalcitonin and C reactive protein was done on the first five postoperative days. Other parameters such as hemoglobin, total protein, albumin and WBC counts were noted perioperatively. Patients were followed up to 60th postoperative day to assess for anastomotic leak, wound infection and other septic foci.

Conclusion: Measuring CRP on the third postoperative day can predict anastomotic leak with a cut off value of 44.32 mg/dl. Patients with raised CRP need careful evaluation to rule out anastomotic leak before deciding on early discharge.

Anastomotic leak (AL) is the most dreadful complication, which can occur following all intestinal anastomotic surgeries. The incidence of AL following intestinal surgeries is 2-20% (1). The incidence is high in esophagectomy and colorectal surgeries and has been reported as 10% and 2-19% respectively (2,3). Mortality following AL after colorectal and esophageal surgeries are 30% and 30-60% respectively (4,5)70 patients undergoing colorectal surgery were prospectively analyzed in a single-center tertiary teaching hospital. Demographic and surgical data were obtained. Serum procalcitonin was taken before surgery and at day 3 (72 hours. AL can present early or late. It is usually diagnosed between 7 to 12 days postoperatively. Late AL presents after one-month postoperatively (6). It is always the priority of any surgeon to identify these ALs at the earliest possible so as to avoid mortality and morbidity.

AL will lead to bacterial contamination of the peritoneal cavity, which leads to rise in inflammatory mediators such as C-reactive protein (CRP) and procalcitonin (PCT) before it presents clinically. AL can be detected early in elective cases, where wound infection and peritoneal contamination are less due to preoperative bowel preparation and prophylactic preoperative antibiotics. Some studies have reported the role of PCT and CRP for early detection of AL in a group of specific surgery like colorectal and oesophageal surgery (3,4,7-10) it is clinically valuable to detect anastomotic leak early after esophagectomy in esophageal cancer. The purpose of this study is to investigate the associations between routine postoperative laboratory findings and anastomotic leak and to analyze the laboratory findings to find out an independent predictive marker for anastomotic leak. In addition, this study compares cases treated with neoadjuvant therapy (NT. However, there are not many reports documenting the efficacy of these parameters in overall alimentary tract surgery.

This study was carried out to determine the role of PCT and CRP plasmatic concentration as an early detector of AL following elective gastrointestinal surgery.

This study was a prospective cohort study carried out in a tertiary centre in India. Institutional ethics committee approval was obtained (JIP/IEC/201/1040). Written Informed consent was taken from all participants in this study, and patients were given full freedom to withdraw at any point of time during the study.

All patients aged more than or equal to 18 years of age, who had undergone elective gastrointestinal surgery with an anastomosis, were included in the study. Patients with fever or focus of sepsis preoperatively, patients who had received intraperitoneal chemotherapy and in patients in whom covering stoma was done with anastomosis were excluded from the study.

All patients, who had fulfilled the inclusion and exclusion criteria, were included in the study after taking informed written consent. Following surgery, blood was collected daily at 8 am on the first five postoperative days for PCT and CRP measurement.

Patient data, such as age, sex, telephone number, diagnosis, indication for surgery, previous surgical history, perioperative hemoglobin, total leucocyte counts (TLC), total protein and albumin were recorded. Hemoglobin and TLC were measured using Sysmex Xt-2000i which works on Coulter principle (13). Albumin was measured in Beckman-Coulter AU5800 using spectophotometry method and bromocresol green was used as dye. Total protein was measured in Beckman-Coulter AU5800 using photometric biuret end point method (14). Confounding variables such as surgical site infection and any other postoperative septic foci were also noted. Patients were followed up postoperatively for any signs and symptoms of leak and any other postoperative complications.

AL was defined as any clinical signs of leakage, confirmed by radiological examination, endoscopy, clinical examination of the anastomosis (i.e., palpation of the anastomosis), or reoperation (15). The patient was labeled as having AL if he/she had clinical evidence of leak like peritoneal signs, bile or faecal content in the drain or if ultrasound guided aspiration of the free fluid or localized collection at the anastomotic site revealed bile or faecal matter or if water soluble contrast leak was seen on fluoroscopy or computed tomography.

Serum PCT, CRP, haemoglobin, TLC, total protein and albumin were analysed for the predictability of AL. The incidence of leak following elective intestinal anastomosis in this hospital, the risk factors associated with leak in the population studied, the sensitivity and specificity of serial estimation of serum CRP and PCT to detect leak early were calculated. The patients were followed up on post-operative day (POD) 60 over telephonic interview, and development of enterocutaneous fistula or late post-operative leak were recorded.

This study was carried out from January 2017 to December 2018. A total of 84 patients were included in the study. Surgical procedures done for the patients were gastric (42), colonic (13), pancreaticobiliary (20), esophageal (3), stoma closure (4) and small bowel surgeries (2). AL developed among 22/84 patients (26.19%). The distribution of anastomotic leak among various procedures were 12, 3, 6, and 1 in gastric, colonic, pancreaticobiliary and oesophageal anastomosis respectively. AL did not show any statistical difference between sex and different age groups (Table 1). Overall mortality in the study was 5.95% (5/84). Mortality in the AL group (3/22; 13.64%) when compared to the mortality in the NAL group (2/62; 3.22%) although higher, the difference was not significant (p= 0.076). The overall incidence of postoperative surgical site infection was 20/84 (23.81%). The incidence of wound infection in the AL group was 27.27% and for the NAL group, it was 22.58%. The difference in distribution of wound infection was not statistically significant (p= 0.657). Clinical demographic parameters studied in AL and NAL groups are shown in Table 1.

Table 2. Comparison of procalcitonin and CRP between AL and NAL groups

Mean and standard deviation of haemoglobin, TLC, total protein and albumin were calculated. The area under the curve of TLC was found to be significant (Table 3).

Table 4. Best cutoff value of CRP and TLC along with AUC, sensitivity and specificity for detecting anastomotic leak 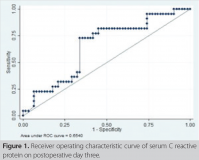 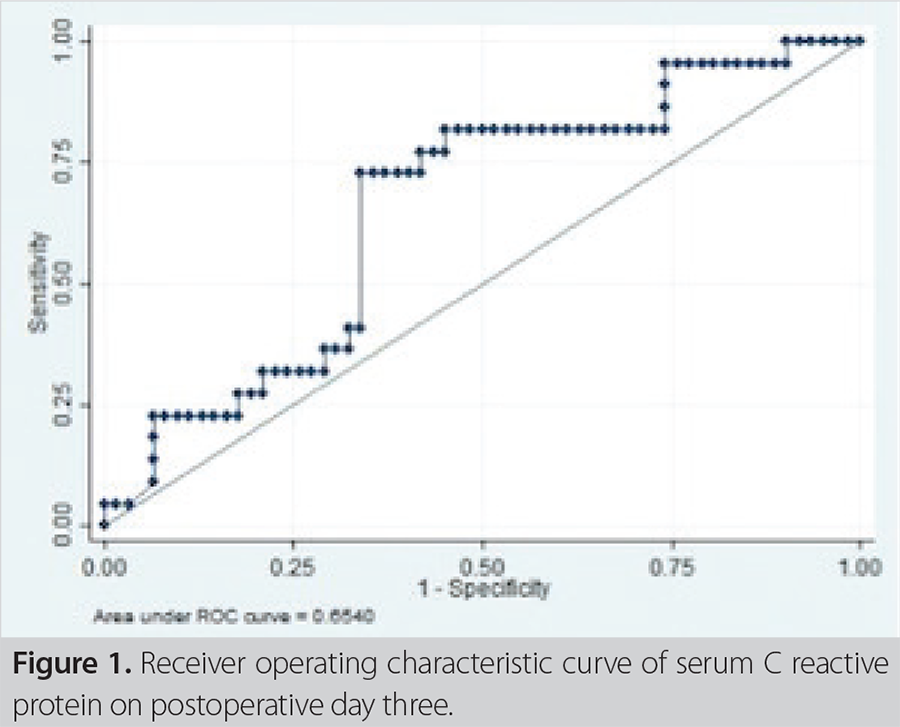 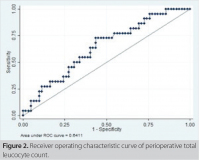 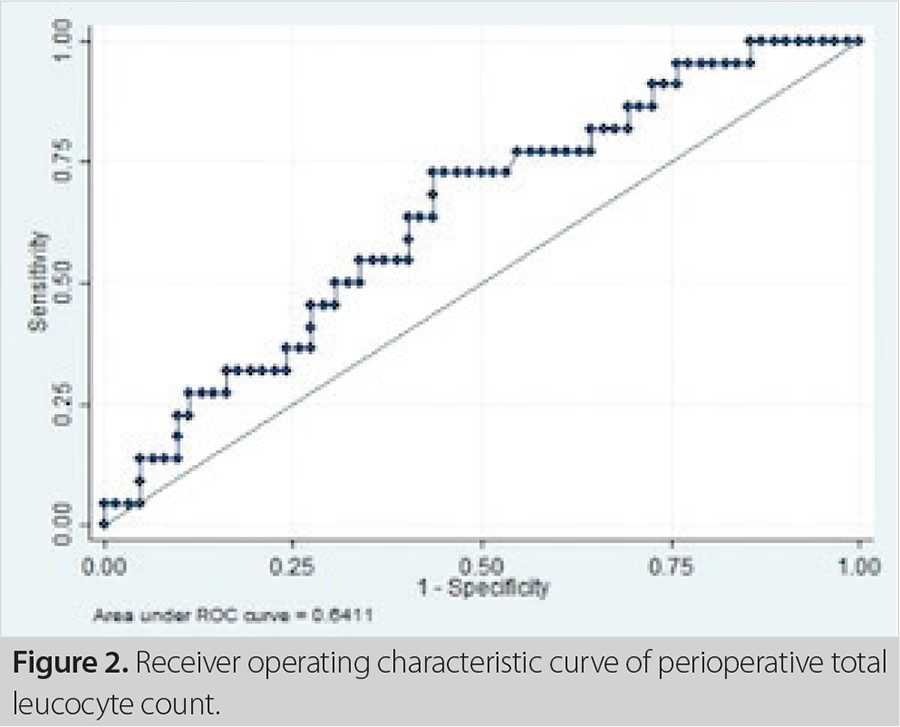 AL is a serious life-threatening complication that can occur after a gastrointestinal anastomosis. It is associated with high mortality and morbidity due to the sepsis it causes. Moreover, overall survival reduces as the chance of recurrence of malignancy increases due to delay in adjuvant therapy. Early diagnosis of AL can reduce mortality and morbidity significantly. CRP is an acute phase reactant produced by liver, in response to infection, ischemia and tissue damage (10). It starts to rise two hours following insult and peaks at 48 hours (3). In normal circumstances, the C cells of thyroid gland produce PCT. In sepsis, white blood cells, pancreas, spleen, kidney, colon, adipocytes and the brain produce PCT. It starts rising at 3-4 hours and peaks at 8 to 24 hours (4). In the present study, the aim was to determine whether serological analysis could detect AL prior to its clinical presentation.

The present study showed that the plasmatic concentration of CRP on third POD with a cut off value of more than 44.32mg/dl was significantly associated with AL. Perioperative TLC, more than 9470cells/mm3 had predicted AL early. Postoperative serum PCT was not an early predictor of AL. Total protein, albumin and hemoglobin level measured perioperatively had no association with AL.

Garcia-Granero et al. have reported about early prediction of AL after colorectal resection using PCT and CRP (8). The study showed that CRP and PCT were reliable predictors from third to fifth postoperative days with AUC more than 0.800. The best predictor was PCT on day five with the cutoff of 0.31 ng/ml, with sensitivity of 100%, specificity of 72%, and negative predictive value of 100% and positive predictive value of 17%. Aiolfi et al. have reported a systematic analysis and Bayesian meta-analysis on five studies including 850 patients on early prediction of esophageal AL using CRP (9). This study showed that CRP values on POD three and five had very good diagnostic accuracy with the AUC of 0.800. The cut off values derived for POD three and five were 17.6 mg/dl and 13.2 mg/dl respectively. Hayati et al. have reported on early prediction of colorectal AL using serum PCT on POD 3 (4). The study showed that PCT cut off value was 5.29 ng/ml with sensitivity of 100%, specificity of 85%, the positive predictive value of 23% and the negative predictive value of 100%. The early predictor of AL associated with pancreaticoduodenectomy surgery was analyzed only in very few studies (16,17). The studies mentioned above showed that the sensitivity and negative predictive value of CRP and PCT in predicting AL of various surgeries was 100%. So, these serological tests can be used to rule out AL, postoperatively. The present study showed that the plasmatic concentration of CRP on third POD was significantly increased in patients with AL and the serial estimation of serum PCT postoperatively was not associated with AL. This may be because of raised postoperative wound infection rate, which is an important confounding factor.

Zarnescu et al. have reported the risk factors related to AL in colorectal surgery (19). General factors associated with increased chance of AL in colorectal surgery were male gender, malnutrition, serum total protein less than 6g/dl and albumin less than 3.5g/dl, hemoglobin less than 9.9g%, blood transfusions, American Society of Anesthesiologists (ASA) score more than or equal to three, prolonged operating time and chronic steroid therapy. Local factors, which are associated with increased chance of AL, are low rectal anastomosis, less than 6 cm from anal verge, neoadjuvant radiotherapy, intraperitoneal chemotherapy, Hyperthermic intraperitoneal chemotherapy and bevacizumab. In the present study, it was found that risk factors which reflect the general nutritional status of the patient such as hemoglobin, total protein, albumin had no association with the AL. Other risk factors such as neoadjuvant radiotherapy or chemotherapy, surgical techniques, duration of surgery, and chronic kidney disease were not studied in our study.

The merits of this study are the risk factors associated with AL such as hemoglobin, total protein and albumin were also analyzed. The other causes of raised CRP and PCT such as wound infection was also considered and analyzed. The duration of follow up was also long i.e., 60 days to include delayed postoperative complications.

The limitation of this study is the high wound infection rate in the study population, which may be because of poor nutritional status of the patients and the malignant nature of the disease.

The plasmatic concentration of more than 44.32mg/dl of CRP on POD three, and >9470 cells/mm3 of postoperative TLC were found to detect the AL early with a high negative predictive value. So, this can be utilized for discharging patients early after elective gastrointestinal surgeries. However, serum procalcitonin was not found to be a predictor of anastomotic leak. Risk factors such as low serum total protein, albumin and hemoglobin were not associated with anastomotic leak.

The approval for this study was obtained from Jawaharlal Institute of Postgraduate Medical Education and Research Ethics Committee (Decision no: JIP/IEC/2016/1040 Date: 16.02.2017).