The effect of obesity in laparoscopic transperitoneal adrenalectomy

Material and Methods: This is a retrospective comparative study carried out between December 2008 and June 2018. A total of 65 patients who un- derwent laparoscopic transperitoneal adrenalectomy were divided into two groups according to their Body Mass Index (BMI). Patients’ demographic data, perioperative and postoperative results were analyzed from hospital medical records.

Conclusion: In obese patients, technical difficulties may be encountered during surgery due to increased adipose tissue, and postoperative complica- tion rates may increase. Nevertheless, laparoscopic transperitoneal adrenalectomy can be performed safely paying attention to the management of obesity-related complications.

Since the first laparoscopic adrenalectomy (LA) was done by Gagner et al. in 1992, laparoscopic removal of adrenal lesion has become the gold standard for the surgical management of most adrenal tumors (1). Current indications for LA are similar to open adrenalectomy and include all functional adrenal tumors; pheochromocytoma, aldosteronoma, cortisol producing adenoma (Cushing syndrome), bilateral adrenal hyperplasia secondary to Cushing’s disease or ectopic ACTH production. Suspicious malignant tumors of the adrenal gland smaller than 5-6 cm in diameter, adrenal metastasis, primary adrenocortical carcinoma, symptomatic angiomyolipomas or cysts, and incidentalomas are the other indications of LA (2). Diagnosis of adrenal masses have increased with the advancement of diagnostic modalities in the last few decades. Laparoscopic adrenalectomy has gained popularity as time passed due to favorable operative field, fewer complications, decreased morbidity, better cosmetic result, less postoperative pain, faster recovery, shorter hospital stay and earlier return to daily activities (3). Several techniques have been described, the most popular are laparoscopic lateral transabdominal approach, posterior retroperitoneoscopic adrenalectomy and robotic adrenalectomy (4-6). Adrenalectomies are not common operations in general practice, so the surgery should be performed in centers with endocrine surgery experience.

Worldwide, it is estimated that there are approximately 1.9 billion overweight people, and of these, more than 650 million are obese. The prevelance of obesity approximately tripled between 1979 and 2016. Body mass index (BMI) is generally used for the diagnosis of obesity, a person’s weight (in kilograms) divided by the square of height (in meters). The diagnostic criteria of World Health Organization (WHO) for obesity is defined as BMI≥ 30 kg/m² (7). Obesity is often considered as a main factor for prolonged operation time, increased blood loss, septic complications and wound infection (8-10). In open surgery, visualization of the surgical field in obese patients is a major problem due to extensive of adipose tissue. In order to overcome this problem, larger incision is required. Obese patients suffer more pain and restriction for longer time due to large abdominal incision. Therefore, there is increased risk of atelectasis and other pulmunary complications in these patients (11,12). Moreover, obesity causes increased risk of wound infections as adipose tissue is hypoperfused and poorly oxygenated (13). Prolonged hospitalization is mostly due to worse perioperative and postoperative complications.

The aim of this study was to evaluate surgical outcomes of laparoscopic transperitoneal adrenalectomies performed in obese and non-obese patients.

In all patients, indications for surgery were according to the American Endocrine Surgeons and Endocrinologs guidelines; adrenal incidentalomas larger than 4 cm in diameter, functional tumors of any size (Cushing’s syndrome, pheochromocytoma, Conn’s syndrome or sex hormone producing tumor), and solitary adrenal metastases. Exclusion criteria included patients deemed high risk for laparoscopy by anesthesia and malignant tumors with radiological evidence of invasion of surrounding organs and tissues.

A lateral transabdominal technique was used for all laparoscopic adrenalectomies. The patients were placed in a lateral decubitis position with the tumor side up and the table flexed between the 12. rib and iliac crest. Four trocars were used for right-sided adrenalectomies (Figure 1), three trocars were used in almost all patients for left-sided adrenalectomies (only one patient needed four trocars) (Figure 2). A thirty-degree laparoscope was used in all the cases and pneumoperitoneum was maintained at 12-14 mmHg by insuflation with carbon dioxide (CO2). On the right side, the right lobe of the liver was mobilized to expose the inferior vena cava, and the triangular ligament was divided before placement of a liver retraction. Sharp and blunt dissection starts at the medial to the lateral edge of liver. Precaution is necessary to the vena cava inferior due to short course of adrenal vein. For the left sided adrenal gland tumor, the spleen, splenocolic ligament, and splenorenal ligament were dissected, and the tail of pancreas was mobilized to the medial on left side. Care is necessary to differentiate (not confuse) adrenal with the tail of pancreas because of similar tissue appearance, especially in obese patients. All specimens were placed in an endobag to be removed. 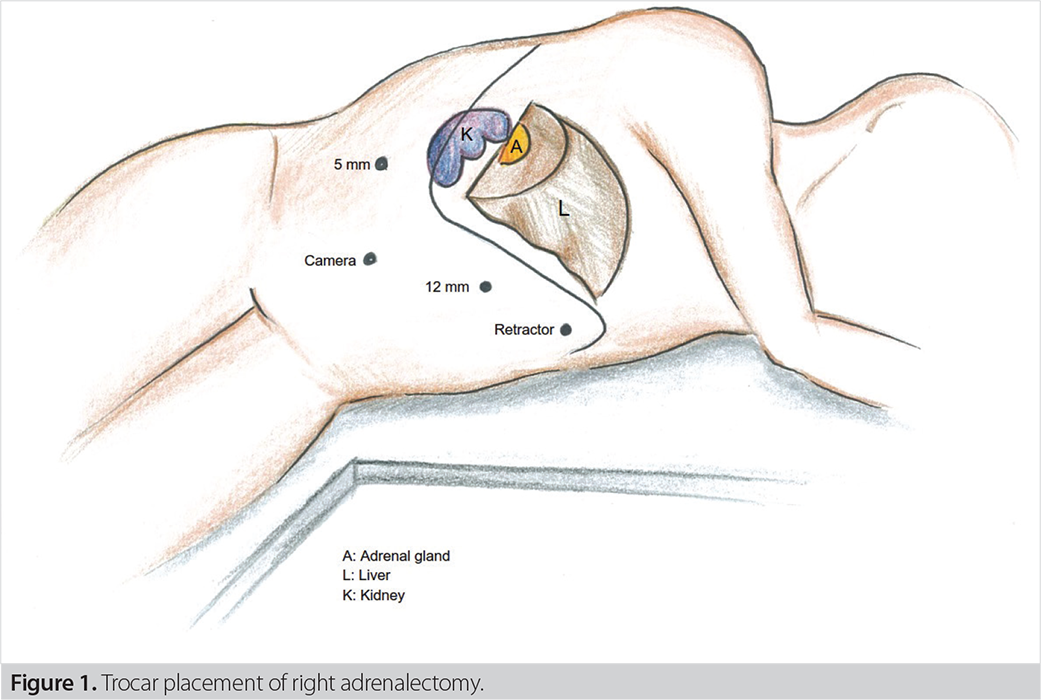 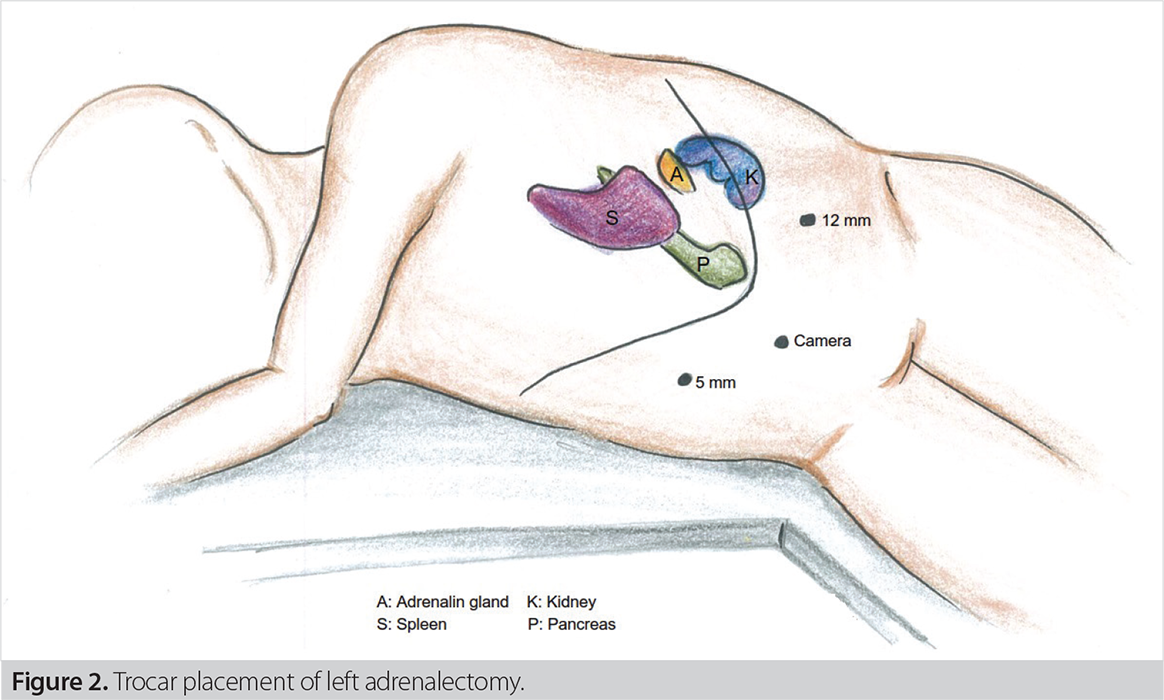 There was a statistically significant difference between two groups for postoperative complications (p< 0.031). Postoperative complications were classified according to the Clavien-Dindo classifications. According to Clavien-Dindo classification; in the non-obese group, one patient had class 2 (blood transfusion), in the obese group, seven patients had class 2 (three blood transfusuions, two pleural effusions, one upper extremity microemboli and one deep vein trombosis) and one patient had class five complication. Although all patients were given deep vein thrombosis prophylaxis and anti-embolic stockings, one patient in the obese group died due to cardiopulmonary arrest (Table 2).

Postoperative histopathological diagnoses are listed in Table 3. Cortex adenoma was reported in most of patients (17 patients (56.6%) in non-obese and 28 patients (80%) in obese group). There was a case of cortex carcinoma in each group. Three patients, who previously underwent pneumonectomy for lung cancer, had radiologically confirmed isolated adrenal metastasis. These three pateints were in the non-obese group, and their adrenal metastasis were resected laparoscopically without any complication.

Over the last few decades, obesity has increased in the world posing new surgical difficulties. Obesity is commonly regarded a risk factor for surgical complications, even though many studies have shown contradicting results (14-19).

The difficulties of surgical procedures in obese patients have been previously described. There are concerns regarding laparoscopic adrenalectomy (LA) in morbidly obese patients because of the associated limited working space and increased risk of postoperative complications (20). Studies have shown comparable peroperative and postoperative results in obese versus non-obese patients after laparoscopic operations (laparoscopic appendectomy, cholecystectomy, hernia surgery, colorectal surgery and antireflux surgery) (21-25). It is unclear why complication incidences vary in LA, this differrence may be due to specific organs that are manipulated in the course of operation. Particularly, in left-sided adrenal tumors, splenic flexure mobilization is required, which may lead to spleen injury. This maneuver may be more difficult in obese patients due to increased adipose tissue.

In our study, we used the lateral transabdominal technique. The most important advantages of this surgical approach are wide surgical field visualization and allowing for the resection of larger adrenal tumors.

In this study, conversion to open surgery was high in the obese group, but with rates similar to conversion rates in other related studies. In the literatüre, the most common peroperative complication of LA is bleeding, which is also the most common reported reason for conversion to open surgery (27-29). In our study, the reasons of conversion were dense adhesions in two patients who had previously undergoneabdominal surgery, laparoscopically intractable hemorrhage in two patients (one patient in each of the groups) and one case of inferior vena cava injury. In one patient, it was difficult to differentiate the separate the tail of the pancreas from left-sided adrenal tumor (2.1 cm). Before the surgery, surgeons should carefully evaluate the patients for previous laparotomies and the adrenal mass size. In obese patients, the surgeon may face the challenge of differentiating small size adrenal mass from adipose tissue or may even confuse the tail of the pancreas with the adrenal tissue of similar appearance. Before the resection of the adrenal tumor, anatomic landmarks such as pancreatic tail, aorta, medial and inferior adrenal artery, renal artery, renal vein should be well mapped for left-sided resection. For the right-sided resection, inferior vena cava, median, superior and inferior adrenal artery and vein should be expored as important anatomic landmarks.

Our study has several limitations. First, this was a single-center study with a retrospective design. Second, there were small number of patients causing relatively high conversion rate in the obese group.