An experimental study on the pathophysiology of rectal prolapse

Objective: For decades, rectal prolapse has been hypothesized to be caused due to laxity or weakness of the pelvic floor muscles which is often sup- posed to be related to childbearing in females. However, 50% of females with rectal prolapse have been reported to be nulliparous and this hypothesis does not explain the incidence of rectal prolapse in males. The aim of this study was to evaluate the role of rectal redundancy in rectal prolapse patho- physiology.

Material and Methods: Nineteen female Sprague Dawley rats (250-300 g) at 16 weeks of age were obtained from the animal center. Rats were divided into two groups as rectal mobilization (study) group (n= 9) and sham-operated control (n= 10) group. In the study group, soft dissection was applied and rectum were mobilized up from the pelvic floor to create a redundant or hypermobilized rectum.The primary outcome was the rate of rectal pro- lapse after rectal mobilization.

Results: As compared to the sham-operated control group, in which none of the rats had rectal prolapse throughout the post-surgical period, rectal prolapse was observed in four of the rats in the rectal mobilization group (0% vs. 44%; p= 0.006). Being unable to increase the length of the rectums of the rats, but using only mobilization to create the redundancy, and the lack of data regarding any adhesions after surgery are the main limitations of this study.

Conclusion: This study showed the role of rectal redundancy on the rectal prolapse pathophysiology.

Figure 1. An illustration showing the possible mechanism of rectal prolapsed. A. A redundant rectum, B. Intussusception during straining, C. Complete prolapse.
×

Female Sprague Dawley rats (250-300 g) at 16 weeks of age were obtained from the Marmara University Animal Center and were housed in cages (one rat/cage) and maintained in an air-conditioned room with controlled humidity (65-70%), temperature (22 ± 2°C) and 12-h light-dark cycles. Rats were fed with commercial rat chow and received tap water ad libitum. All the experimental protocols used in this study were approved by the Marmara University Animal Ethical Committee.

Rats were divided into two groups as rectal mobilization group (n= 9) and sham-operated control (n= 10) group. Under general anesthesia induced by intraperitoneal (i.p.) injection of ketamine (100 mg/kg) and xylazine (10 mg/kg), laparotomy was performed by transverse incision of the shaved lower abdomen. In the rectal mobilization group, soft dissection was applied using a mosquito clamp and rectum were mobilized up (by cutting the ligaments) from the pelvic wall to create a redundant or hypermobilized rectum (Figure 2). Circumferential dissection was performed along the rectum up to pelvic floor in the rectal mobilization group. The dissection was stopped at the pelvic floor. To prevent adhesions, hyaluronic acid gel was then applied to whole areas of dissection and along the rectum. In the sham-operated control group, laparotomy was performed without any dissections. Anti-adhesive material was not applied to the sham group since no any dissection was done and the rectum already fixed by its peritoneal ligaments. Abdominal incisions in both groups were closed by simple continuous sutures and subcutaneous saline (1 ml/kg; i.p) was injected to prevent any fluid loss. 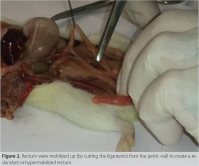 Figure 2. Rectum were mobilized up (by cutting the ligaments) from the pelvic wall to create a re- dundant or hypermobilized rectum.
× 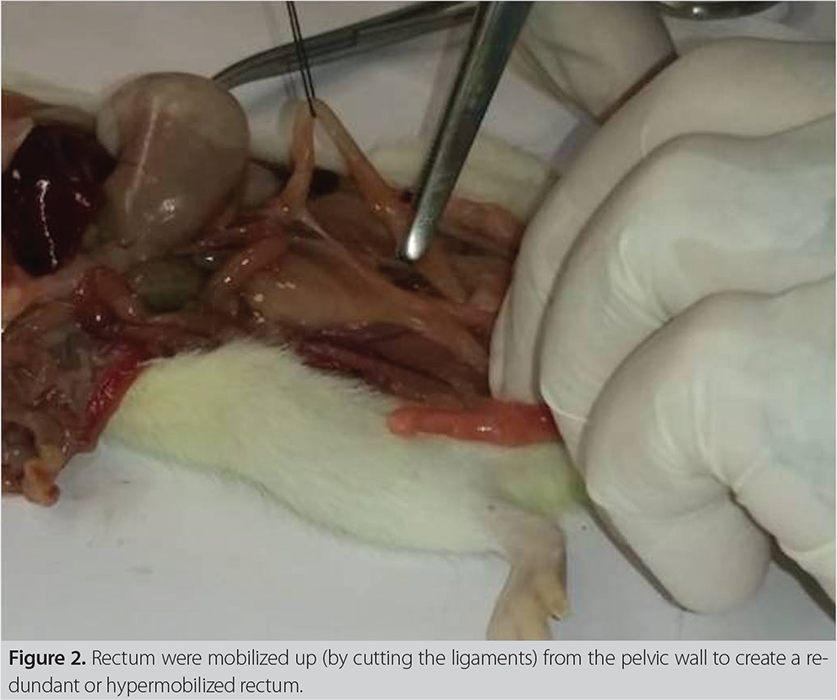 After a two-week recovery period, rats in both groups were given loperamide hydrochlorid (0.15 mg/kg/day; Ali Raif İlaç, İstanbul) in their drinking water in order to induce constipation and thereby, straining during defecation. During the follow-up period, rats were checked every day, on two occasions, by lifting their tails and observing the anal openings during defecation. It was recorded as “complete prolapse” when the entire layer of the rectum with its visible concentric folds has protruded to the outside of the anus. At the end of the post-surgical 15. week, rats were sacrificed by decapitation. The primary outcome of this study was the rate of rectal prolapsed after rectal mobilization. 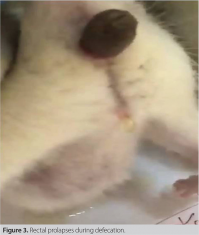 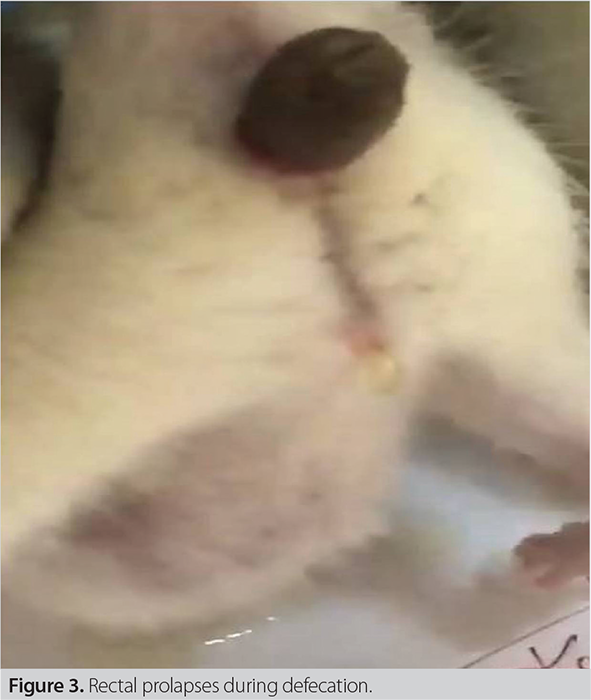 Today, the most relevant explanations of rectal prolapse are still controversial. These explanations include anatomic dispositions, such as pelvic floor laxity, and predisposing factors, such as multiparity; but none of them are sufficient to explain the mechanism of prolapse and the definite cause is still unknown (10). In order to search the pathophysiology of rectal prolapse we established an animal model. All rats were nulliparous, and were operated to mobilize their rectum (by cutting ligaments in laparotomy) and given a constipation-inducing drug to cause severe straining during defecation. Nearly half of the rats developed rectal prolapses throughout the experimental period. Since the rats were all nulliparous, results show that rectal prolapse cannot be solely associated with giving birth. Furthermore, we also showed that mobilization of the rectum can by itself lead to rectal prolapse in some of the rats, suggesting that elongated and freed rectum could protrude repetitively as a result of defecation effort due to constipation. Changes in the timings of prolapse could be attributed to possible variations in rectal lengths. Since not all of the rats that had constipation and mobilized elongated rectum have developed rectal prolapse, it may be suggested that other additional causative factors could be responsible in exaggerating the mobility of rectum. Since most patients with rectal prolapse have a long history of constipation (5), it is thought that prolonged, excessive and repetitive straining during defecation may predispose to rectal prolapse (4,6-10). However, we believe that rectal intussusceptions or prolapse lead to obstructive defecation which subsequently may be the cause of severe straining during defecation. In 1912, Moschcowitz has proposed that rectal prolapse was a sliding hernia through a deficient pelvic floor which the rectum herniates (11). This theory was based on the observation that a hernia sac of peritoneum from the Pouch of Douglas and rectal wall can be seen (2). Although this theory still seems valid, we do not think that the pelvic floor weakness could lead to rectal prolapse. For example, the weakness of the abdominal wall around colostomy leads to parastomal hernia but not to stoma prolapse. However, an elongated non-fixed bowel may cause stoma prolapse without any weakness of the abdominal wall. In the same way, we think that an anatomic variation of a redundant (elongated) rectum may predispose for rectal prolapse without weakness of pelvic floor. Another concept suggested that rectal prolapse was actually a circumferential 2° or 3° intussusception (12). Complete circumferential intussusception usually starts 6-8 cm from the anal verge but can continue through the anal canal (13). This seems to be more reasonable and partially appropriate with our theory. Furthermore, in our theory we have explained the cause of intussusceptions by the redundancy of the rectum. Surgery is the mainstay of rectal prolapse treatment. Until today over one hundred surgical modalities were identified. Transabdominal or Perineal procedures are performed to repair a rectal prolapse. Transabdominal repairs involve rectal fixation, rectal resection or a combination of resection and fixation. Attachment of the rectum to the sacrum can be performed using foreign material or sutures although the lateral rectal attachments can be achieved to the sacral periosteum without foreign material. Perineal procedures including Altemeier operation (perineal proctosigmoidectomy) and Delorme Procedure in which transanal resection of the rectum or rectal plication method is also used to shorten the length of rectum (13-17). As transabdominal repairs involve sacro-promontory fixation of the rectum without any intervention to the pelvic floor or muscles, giving us a hint that rectal prolapse may not be the result of a pelvic floor or muscle pathology. Thus, rectal prolapse etiology may lie within its mobile state. Being unable to increase the length of the rectums of the rats, but using only mobilization to create the redundancy, and the lack of data regarding any adhesions after surgery are the main limitations of this study. On the other hand, observation of the rats during defecation was done only twice a day, but a 24-h video monitoring could be used to gather more convincing results.

Since there are no similar studies and not enough knowledge in this field, this study introduced a new reasonable explanation on the pathophysiology of rectal prolapse and proved that using a new experimentally model of rectal prolapse, which may be a premise for future studies. We think that this theory has a significant value in clinical practice since the parity and pelvic floor weakness seem to be less important than the redundancy of the rectum. The redundancy is common and well-defined in the human colon; that is, an individual with a redundant colon has an abnormally long colon, especially in the final section (the descending colon). A redundant colon often has additional loops or twists. Other names for a redundant colon include tortuous colon or elongated colon. We think that this definition can be applied to the rectum. Therefore, this variation of the rectum may lead to the clinic of obstructive defecation, which also includes the rectal prolapse. Furthermore, this diagnosis is usually underestimated, particularly in cases of internal intussusceptions. By using our hypothesis, in which we defined the variation of redundant rectum, we think that the prevalence of rectal prolapse among both genders should also be re-evaluated. Further studies including clinical studies are needed to definitely prove our theory in explaining the pathophysiology of rectal prolapse.

The approval for this study was obtained from Marmara University Animal Experiments Local Ethical Committee (Decision No: 08.2019.mar, Date: 08.02.2019).