Does taurolidine have any effect on liver regeneration and oxidation in the experimental hepatectomy model?

Results: There was no difference between the groups for malondialdehyde, Cu-Zn superoxide dismutase and glutathione levels (p> 0.05). Binuclear nuclei levels were comparable between the H and HT groups (p= 0.06), while taurolidine decreased binuclear hepatocyte levels in the sham operated groups (p= 0.02). Taurolidine application decreased Ki-67 levels after partial hepatectomy (p= 0.001).

Conclusion: Taurolidine may cause anti-regenerative effects after partial hepatectomy without causing oxidative damage.

Partial hepatectomy (PH) is a common procedure of liver surgery. Hepatic regeneration (HR), which almost instantly follows PH, is an exceptional response of the organ to recover to its original size and functions (1). HR is a complex process where epithelial cells, Kupffer cells and hepatocytes have significant roles (2). Remarkable biochemical changes take place during HR; the oxidative stress has a paramount role with an immediate increase after the PH and during hepatic regeneration (3-4). Moreover, free oxygen radicals arise from the partial fragmentation of molecular oxygen, and free radicals increase with tissue damage; tissue malondialdehyde (MDA) is utilized to quantify lipid peroxidation caused by free radicals (5,6). Finally, tissue glutathione (GSH) levels and superoxide dismutase (SOD) activities reveal antioxidant status (7,8).

Taurolidine (TRD) is a taurine based bicyclic molecule, and previous studies have revealed that it has antibacterial, antiendotoxic and cytoprotective effects (9,10). TRD is mostly used for the treatment of patients with sepsis. It leads to prokaryote degeneration and connects free lipopolysaccharides to exotoxins (11). TRD suppresses mitochondrial cytochrome-C and induces apoptosis in tumor cells by inhibiting protein synthesis at an early stage without adverse effects (12,13). Since there is limited data on the effects of TRD on oxidative damage and hepatic HR after PH, it was aimed to evaluate this issue in an animal model.

The Institutional Ethics Committee of Experimental Animal Research approved the protocol of the study. Forty Wistar-Albino male rats, weighing between 250 and 350 gr, were used. Rats were housed five in per cage, under constant temperature (

A daily dose of 100-mg/kg/day (Tauroline®, Boehringer Ingelheim, Germany) were given to the rats in the ST and HT groups. The S and H groups were administered same volume 0.9 % NaCl solution intraperitoneally daily, while the others received TRD injections.

PH was performed with general anesthesia. After shaving, the abdominal wall was cleaned with povidone iodine solution and a median abdominal incision was performed. Standard 70% PH was performed in the H and the HT groups (14), whereas laparotomy without liver resection was performed in the S and the ST groups. The abdominal incision was closed with 2/0 silk continuous sutures. On postoperative day seven, the rats were decapitated under general anesthesia [ketamine 40 mg/kg, intraperitoneal and xylazine (5 mg/kg, intramuscular)]. Liver tissue sampling was done immediately after decapitation. Oxidative stress was evaluated by measuring malondialdehyde, glutathione and Cu-Zn superoxide dismutase activity (SOD) levels in the liver tissue.

Tissue samples were weighed at room temperature. Ten percent homogenates were prepared by homogenization buffer with 0.15 M phosphate. Homogenization was performed at 4°C. When the homogenization was completed, supernatants were obtained by centrifuging the homogenates, which were prepared for the determination of MDA at 3000 rpm for 10 minutes and for SOD and GSH at 13000 rpm for 15 minutes. The method of Beuter and et al. (15) was used for these quantifications. SOD analysis was performed based on Sun and Oberley’s method (16). In MDA analysis, a pink colored complex is formed as a result of its incubation at 95°C with thio-barbituric acid (TBA) at pH 3.5 and this complex is measured by spectrophotometer at a wavelength of 532 nm. MDA levels were given as nmol/gr tissue by using MDA’s molar extinction coefficient (n= 1.56 x105 M-1).

For each animal, four randomly taken tissue sections were stained with hematoxylin-eosin and examined by experienced pathologists who were unaware of the treatment groups. Dual nuclei hepatocytes located randomly selected ten different fields were counted under x400 magnification. Cells definitely defined that two nuclei in a single cytoplasm were accepted as dual nuclei and the arithmetic average of the total number of cells were considered. The number of mitosis located in the same fields was recorded.

The results were presented as mean and standard deviation. P value of <0.05 was considered to be significant used by JMP® Statistical Discovery Software and analyzing Kruskal-Wallis test. Student’s t test was used in the comparison of the groups of Binuclear hepatocyte and Ki-67.

All the rats completed the experiment; there was no perioperative death. There was no difference between the groups regarding the malondialdehyde, Cu-Zn superoxide dismutase and glutathione levels (Table 1). On postoperative day seven, both experimental and control groups had similar hepatic oxidant activity.

Although they were significantly close, the levels of binuclear hepatocytes were statistically comparable between the H and HT groups. (p= 0.06). Additionally, taurolidine administration decreased binuclear hepatocyte numbers in the sham-operated group (Figure 1) and (Table 2). Further evaluation with immunohistochemical staining revealed decreased Ki-67 levels after PH with taurolidine use (Figure 2) and (Table 2). 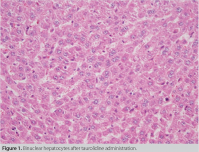 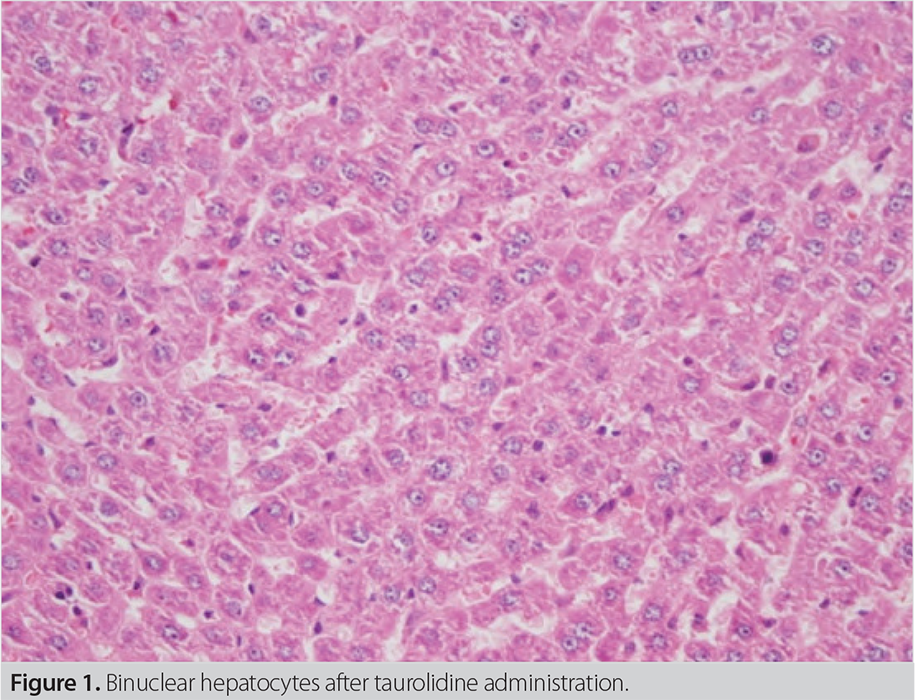 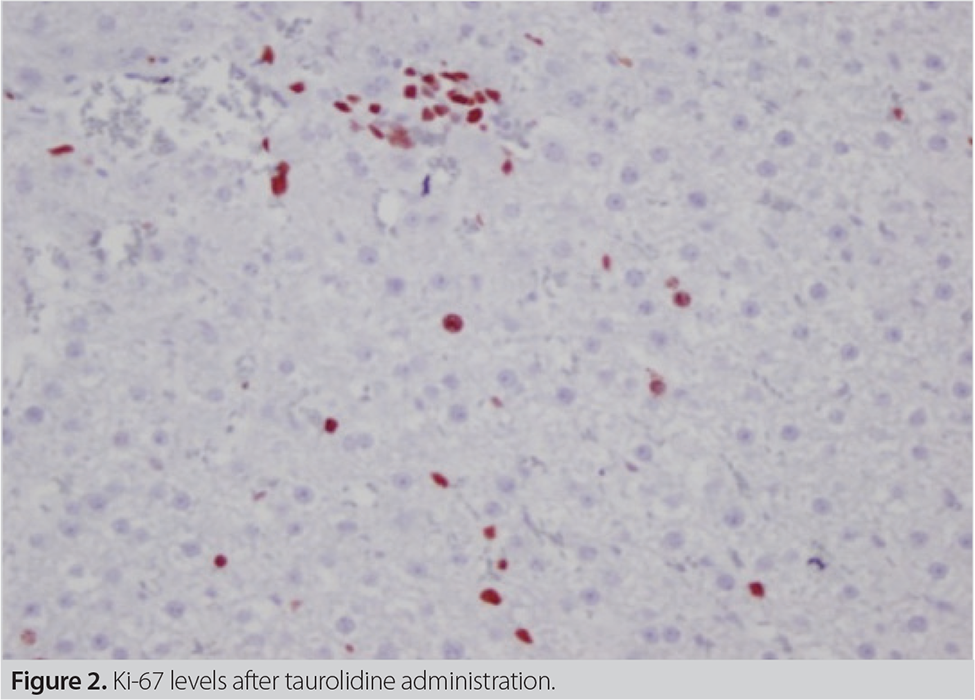 The results of the current study revealed that TRD use may reduce the ability of in vivo regeneration of the liver. This is a remarkable finding to consider for use of TRD after PH, especially for patients with limited functional liver capacity. TRD is commonly used for treatment of patients with sepsis (11). While we did not use any kind of septic model in our experimental study, it is well known that the toxic internal environment limits regenerative capacity of the liver and cause hepatotoxicity (18). The additional anti-proliferative effect of TRD may be an undesirable effect following liver resection. Anti-neoplastic effects of TRD against various cancer types such as mesothelioma have been shown previously (19). Prooxidant antineoplastic drugs affect cancerous tissue, but do not affect non-neoplastic tissue (20). TRD is a prooxidant antineoplastic drug with anti-regenerative effect on cancer cells and not hazardous on non-neoplastic tissues (21). TRD promotes leukopoiesis, erythropoiesis, as well as improves renal and hepatic function against systemic toxicity in severe sepsis (7). While TRD supports wound healing, it may prolong the epithelization process (22,23). Since regeneration pathways varies for different, consequences of TRD use may vary among the tissue types (24).

Hepatic regeneration is an exceptional response of the liver to recover to its original size and functions (1). In addition to hepatocytes, Epithelial cells, endothelial and Kupffer cells of the biliary tract play a role in liver regeneration (1,2). Endocrine and paracrine hormones, proto-oncogenes and transcription factors are the key points for modulating regeneration process (25). Remarkable biochemical changes take place during HR; the oxidative stress has a paramount role with an immediate increase after the PH and during hepatic regeneration (3,4). The liver tissue oxidant status was similar among study groups. The oxidant activity increases within the early phase of liver regeneration (26). Regeneration starts in 10-12 hours after hepatectomy, reaches to its maximum value at 24 hour and completes in 5-10 days (27). In rats, lipid peroxidation significantly increases 90 minutes after the generation of the liver ischemia (28). Hepatic functional tests are closely correlated with the MDA (29). Therefore, monitoring lipid peroxidation, gives a reliable impression on liver functions. We have previously reported that high oxidant activity was being maintained in the plasma but resolved in the liver tissue seven days after PH (14). Overall impression based on the results of the study is that anti-regenerative effects of TRD after PH seem non-toxic. There is no sign of oxidative damage in the biochemical and histological analyses were observed.

We need to mention the controversies on oxidative activity related to in vivo and in vitro use of TRD. Dual effect of TRD has been shown previously. While antioxidant properties of TRD have been shown against sepsis induced oxidative stress, TRD increased production of reactive oxygen species in ex vivo glioma cells (7-21). Low production of oxidants and dominant antioxidant capacity of the non-malignant cells compared to the cancer cells and infectious agents may establish a selective environment for survival of healthy host tissues (30).

Formaldehyde, which is a carcinogenic and toxic substance, is an in vivo breakdown product of TRD. In routine practice, TRD is used with polyvinylpyrrolidone, which reduces in vivo concentration of formaldehyde (36). No toxic effect of TRD has been reported neither in clinical practice nor in our study (37). In addition to hematoxylin and eosin dye for histological evaluation, immunohistochemical staining with Ki-67 (SP6) had performed. Ki-67 is an antigen in the nucleus of the cell and the level of the monoclonal antibody, which is produced against Ki-67, increases as the cell cycle progresses on (38,39). Ki-67 analysis is one of the most reliable immunohistochemical techniques for evaluating liver regeneration (40).

Lack of molecular markers analyzing hepatic regeneration and oxidative stress is the limitation of the study. However, our results provide a basis on taurolidine use after PH or in liver surgery for the patients with limited hepatic parenchyma reserve.

Taurolidine may cause anti-regenerative effects after partial hepatectomy without causing oxidative damage.

The approval for this study was obtained from Istanbul University Animal Experiments Local Ethics Committee (Decision No: 41, Date: 16.04.2009).