Objective: Primary hyperparathyroidism (PHPT) is a systemic disease which, along with bone and stone disease, also causes several subjective symptoms which impairs the quality of life (QoL). However, NIH guidelines do not include non-specific physical and neuropsychological symptoms as an indication of parathyroidectomy. SF-36 is one of the most commonly used tools for assessing QoL; it measures both physical health (PH) and mental health (MH).

Material and Methods: This is a prospective observational study including 50 patients of symptomatic PHPT. Patients were categorized into normocalcemia (8.5-10.4 mg/dL), mild hypercalcemia (10.5-11.9 mg/dL), moderate hypercalcemia (12-13.9 mg/dL), and severe hypercalcemia (>14 mg/dL). QoL was assessed by using SF36 survey both pre-operative and three months after parathyroidectomy.

Conclusion: This study showed improvement in all aspects of PH and MH of SF-36 after parathyroidectomy, even in normocalcemics. Despite the fact that current guidelines for the management of PHPT do not include QoL as an indication for parathyroidectomy, we propose that parathyroidectomy should be considered, if patient is fit for surgery.

Primary hyperparathyroidism (PHPT) is the third most common endocrine disorder and is caused by a single adenoma in 80%-90% of patients (1). PHPT is a systemic disease as overproduction of PTH and hypercalcemia causes an alteration in bone metabolism (53%), nephrocalcinosis (40%), nephrolithiasis (70%), cardiovascular involvement (61%) along with neuropsychiatric symptoms (37% to 62%) (2-5). The majority (80%) of PHPT patients in the Western population are asymptomatic and are diagnosed on a routine biochemical investigation. However, in India, the majority of patients who are diagnosed with PHPT either have prolonged neglected bone disease or recurrent stone disease. Symptomatic patients with severe osteoporosis suffer from multiple fractures and non-healing of fracture. Additionally, patients with undiagnosed PHPT with renal stones undergo multiple endoscopic or open procedures for renal stone disease. PHPT patients also have several subjective symptoms associated with hypercalcemia like easy fatigability, back pain, weakness, memory loss, mood swings, depression, dyspepsia and constipation.

Reduced quality of life (QoL) in PHPT is not only due to cardiovascular involvement, severe osteopenia, and stone disease but also due to countless other associated subjective symptoms. Surgery offers a cure in the majority and is measured as the definitive. Treatment is according to the consensus statement of international guidelines. However, NIH guidelines do not include non-specific physical and neuropsychological symptoms as an indication of parathyroidectomy in PHPT patients. Surgery brings improvement in bone health; however, improvement of psychological dysfunction is still a matter of debate. There are studies from the Western world where QoL was assessed and found to have significant improvement by using various tools like Pasieka’s parathyroid symptoms score, Short-Form health survey (SF-36), primary hyperparathyroidism quality of life questionnaire (PHPQOLQ) and a disease-specific Quality-of-Life questionnaire.

Objective data addressing QoL of these patients from India are limited. SF-36 is one of the most commonly used tools. It is an excellent psychometric, well organized and validated health-related questionnaire which measures both physical health (PH) and mental health (MH), and it is also easy to administer in a short period of time where the contact time with the patient is short. Therefore, the present study aimed to evaluate QoL using the SF-36 questionnaire in patients with PHPT before and after three months of curative parathyroidectomy.

Mean age of the study group was 40.8 ± 13.9 years; the majority were females (60%, n= 30). Demographic profile and presenting symptoms are shown in Table 1. The majority had single gland involvement (96%, n= 48), and only two patients had double gland disease (4%, n= 2). Parathyroid adenoma was confirmed on histopathology in all patients.

Table 2. Biochemical parameters before the operation and three months after parathyroidectomy

Preoperatively, PHPT patients had significantly lower PH (49 ± 13) and MH (61 ± 17), and it improved significantly after three months of curative parathyroidectomy (PH 82 ± 6, MH 81 ± 9, p< 0.001). There was an overall improvement in QoL of individual groups both in PH and MH components (Figure 1). The improvement was more substantial for bodily pain, role physical, vitality and general mental health. 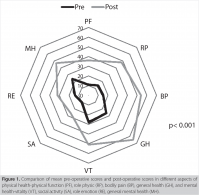 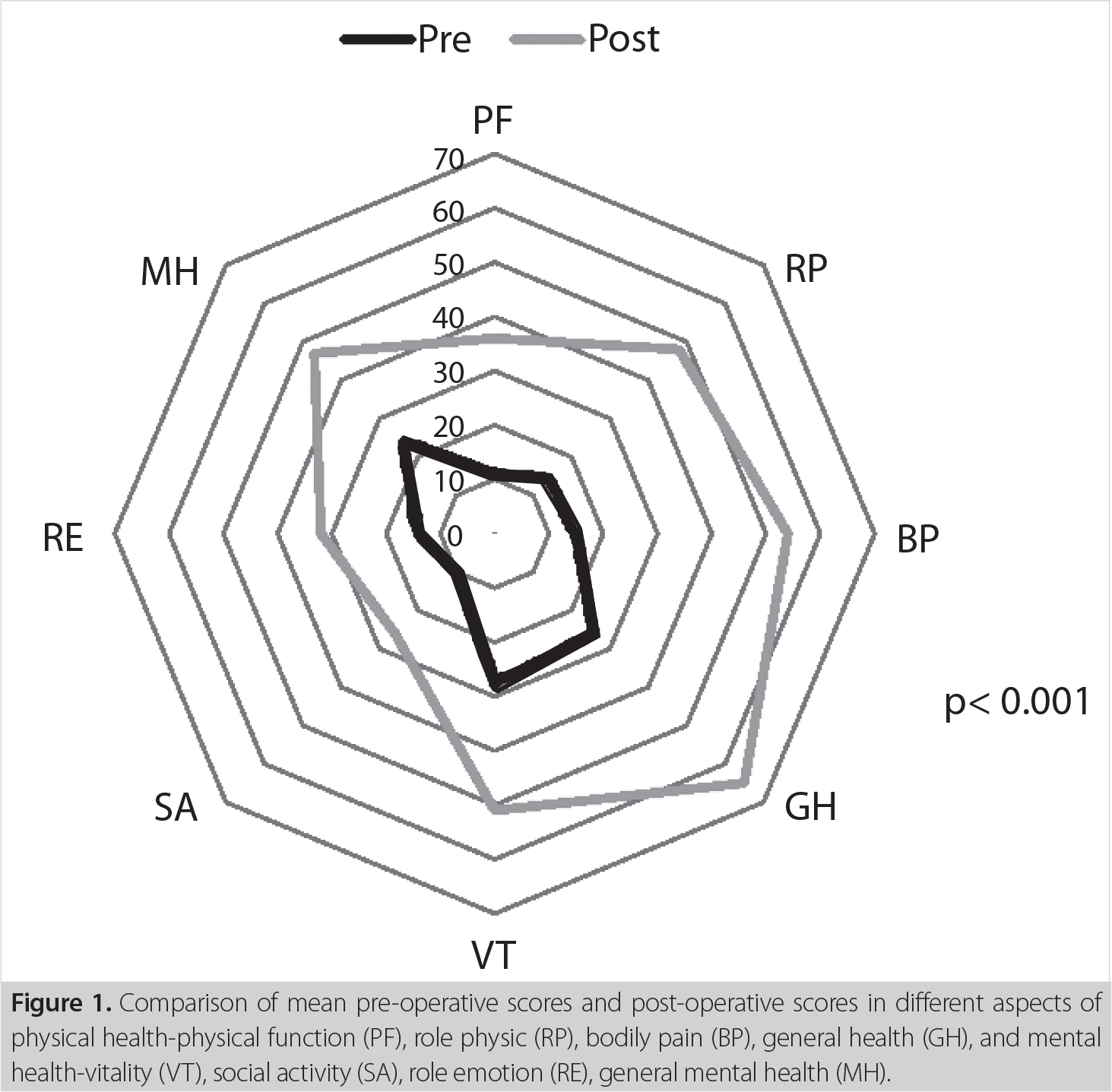 Table 3. Comparison of QoL pre and post-operative parathyroidectomy based on serum calcium levels

Patients with PHPT experience various systemic and neuropsychological symptoms which attribute to reduce QoL. In this study, the impact of parathyroidectomy on QoL in PHPT patients was assessed using the SF-36 questionnaire, and it was found that there was a significant improvement in QoL after parathyroidectomy even in patients who were normocalcemic. We found considerable improvement in bodily pain, role physical, vitality and mental health.

In a prospective multicenter study by Weber et al. where 194 patients of PHPT with elevated depression scores and suicidal ideation were included, QoL was evaluated using the SF-36 questionnaire. Pre-operative SF-36 score was significantly lower in PHPT patients as compared to 186 patients who underwent thyroidectomy. However, there was an increase in QoL after parathyroidectomy over one year (6).

Roman et al., in 28 patients with PHPT, have used the Beck Depression Inventory and Spielberger State-Trait Anxiety Inventory for assessing depression and anxiety and the Rey Auditory Verbal Learning Test and Groton Maze Learning Test for evaluating the cognitive function. They observed that PHPT patients were associated with higher depression score and more significant problem in spatial learning; with improvement in these parameters after parathyroidectomy. However, they did not assess QoL. However, in the present study, additional information regarding improvement in QoL was shown after parathyroidectomy, although cognitive functions were not measured by SF 36 surgery (9).

In this study, improvement in MH scores was found to be dependent on the level of pre-operative calcium levels, whereas PH scores were independent. Also, normocalcemic patients had a decreased QoL, which improved significantly after parathyroidectomy. It explains that PTH had a direct effect on QoL. In a prospective multicenter study by Bannani et al. where SF-36 questionnaire was used to assess QoL, it has been found that QoL was affected similarly among normocalcemic or hypercalcemic PHPT patients in both physical and mental aspects. There was an improvement in both physical QoL and non-specific symptoms (such as fatigue, anxiety, bone pain, muscular weakness and abdominal distension) after parathyroidectomy, but the improvement was more pronounced in the hypercalcemic PHPT patients (10). Beysal et al. have shown that normocalcemic and hypercalcemic PHPT patients had a similar risk of cardiovascular risk factors, kidney stones, metabolic syndrome and low glucose tolerance, and parathyroidectomy improved these risk factors among both groups. Recent studies have also reported that about 20 per cent of normocalcemic PHPT progresses into hypercalcemic PHPT, the majority within 2-4 years of diagnosis (11).

SF-36 does not give information about cognitive function. The sample size for this study was small.

This study showed improvement in all aspects of PH and MH of SF-36 after parathyroidectomy, even in patients with normocalcemia. Preoperatively, QoL was significantly lower concerning role physical, general health and the physical component, and improvement was more considerable for bodily pain, role physical, vitality and mental health. Even though current guidelines for the management of PHPT do not include QoL as an indication for parathyroidectomy, we propose that parathyroidectomy should be considered for patients with PHPT even when they do not meet the current NIH criteria but they are fit for surgery.

This study was obtained from Postgraduate Instute of Medical Education and Research, Chandigard (Date: 21.12.2018, Decision no: 002145).