Seasonal effects on the mechanisms of burn injuries

Objective: This study aimed to evaluate seasonal effects on the mechanisms of burn injuries in patients requiring hospitalization.

Material and Methods: A retrospective evaluation was made using the information of 419 hospitalized burns patients, including demographic data, degree and percentage of burn injury, cause and mechanism of burn injury, morbidity and mortality. Burn mechanisms were grouped as thermal burns (flame, boiling liquid, contact), chemical burns and electrical burns. When calculating the percentage of body surface area burned, the rule of nines was applied. Seasonal classification was made appropriate to the northern hemisphere.

Results: According to the seasons, the most burns were seen in spring months (n= 130, 31.0%). In the examination of the mechanism of burn injury, the most common type of injury was boiling liquid in 159 patients followed by flame injury in 146 patients. There was an increase in electrical and chemical burns in spring and summer. A statistically significant difference was determined between the types of burns according to the seasons (p= 0.024). The burn injury occurred as a result of a workplace accident in 82 cases, the majority of which were in autumn, and summer, and the difference in the seasons was determined to be statistically significant (p= 0.045). There was a statistically significant increase in the exposure of individuals aged >65 years to boiling liquid burns in winter and summer months (p= 0.014).

Conclusion: The results of this study showed a seasonal effect on the types of burn injuries. A higher rate of thermal burns was expected to be found in winter, but this was not the case in patients with indications for hospitalization, as chemical and electrical burns in workplace accidents were seen more frequently in warmer seasons of spring and summer. In this context, burns units should be prepared for patient profiles to vary according to the season.

Burn injuries are the fourth most common type of all traumas, with approximately 90% seen in under-developed and developing countries, causing severe morbidity and mortality (1,2). Previous studies have reported that the frequency and mechanism of injury show differences according to age, sex, socio-economic status, and season (3-6). There are evaluations in the literature on the relationship between thermal burns and seasons or between the increase in the use of resources and the seasonal increase in patient rates (7). However, no study could be found in the literature on the subject of the seasonal links to less commonly seen burn types other than thermal burns. Providing informative education for the community on public health problems such as burns involving the whole society is known to reduce the frequency. Moreover, raising the awareness of physicians of this seasonal relationship will allow them to be better prepared for burn traumas.

The aim of this study was to determine whether or not there was any seasonal difference in types of burn injuries, primarily thermal burns, but also other less frequently seen burn types.

Approval for this retrospective study was granted by the Local Ethics Committee (Decision no: E-19-2543, Date: 21.02.2019). The study was conducted in the Burns Treatment Centre between January 2017 and September 2019. All study procedures were applied in compliance with the 1964 Helsinki Declaration and later revisions, and the ethical standards of the institutional and/or national research committee.

Demographic data of the patients, physical examination findings, degree of burn, percentage of burned body surface area, mechanism of burn injury, cause of burn injury, morbidity, and mortality were retrieved from computer files, patient records, operating notes, and anesthesia follow-up forms. Burn mechanisms were grouped as thermal burns (flame, boiling liquid, contact), chemical burns and electrical burns. The degree of the burns was classified by a burns unit specialist physician, and when calculating the percentage of body surface area burned, the rule of nines was applied. Areas of first-degree burns were not included in the calculations.

As Turkey is geographically located in the northern hemisphere, seasonal classification was made accordingly; the months of December, January, and February were accepted as winter, March, April, and May as spring, June, July and August as summer, and September, October, and November as autumn.

The conformity of the continuous numerical data to normal distribution was assessed with the Kolmogorov-Smirnov test. As the data were seen to be normally distributed, the relationship between the seasons and the continuous data of age and burn percentage was investigated with the Kruskal Wallis test. Chisquare test was applied to categorical data. A value of p< 0.05 was accepted as statistically significant.

According to the seasons, the most burns were seen in spring months (n= 130, 31.0%). In the examination of the mechanism of burn injury, the most common type of injury was boiling liquid in 159 patients followed by flame injury in 146 patients. There was an increase in electrical and chemical burns in spring and summer. A statistically significant difference was determined between the types of burns according to the seasons (p= 0.024). The burn injury occurred as a result of a workplace accident in 82 cases, the majority of which were in autumn, and summer, and the difference in the seasons was determined to be statistically significant (p= 0.045) (Table 1).

No statistically significant seasonal change was observed according to age (p= 0.805). When the patients were evaluated according to age and season, no significant difference was determined between the groups (p= 0.790). There was seen to be a statistically significant increase in the exposure of individuals aged >65 years to boiling liquid burns in winter and summer months (p= 0.014) (Figure 1). Despite the lack of seasonal difference in respect of sex, there was a significant difference between the groups when they were evaluated in respect of sex, seasonal change, and cause of burn (p< 0.001) (Figure 2). 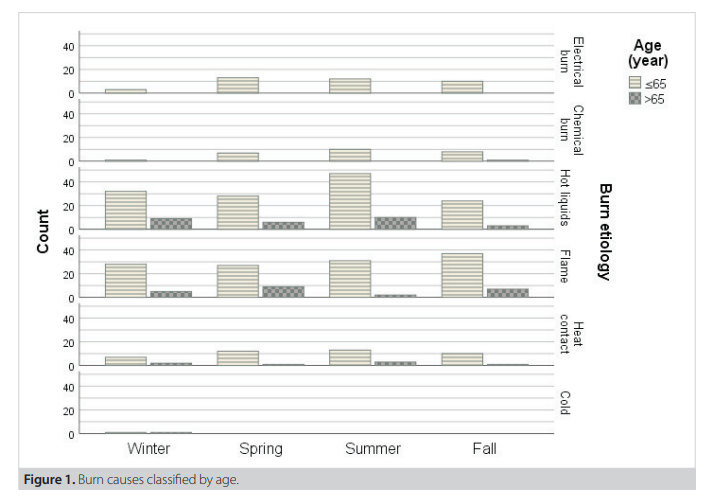 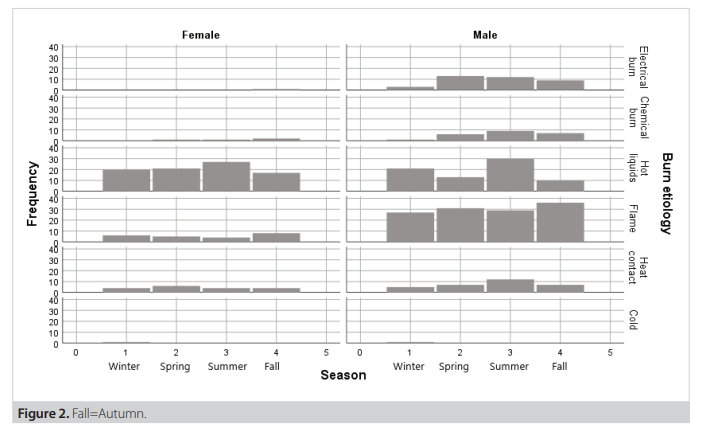 The percentage of burned body surface area was seen to be greater in summer and autumn months on presentation at hospital (p= 0.006), and seasonal comparison of the total burn area values was found to have a moderate clinical effect (effect size= 0.325) (Table 2).

There are studies in the literature which have reported that seasonal effects can have an impact on surgical outcomes, may increase hospital presentations, and could have positive or negative effects on the use of resources. It has been shown that seasonal status does not only affect burns patients, but can also affect breast cancer recurrence (8), high HbA1c levels (9), cardiopulmonary arrest (10), and admission to intensive care units (ICU) (11). Knowledge of these types of conditions can allow planning of resources and personnel in hospitals, ICUs, and burns centers, and even the provision of information to the community on this subject using mass communication tools.

Although the current study results showed no difference in patient sex according to the seasons, it has been reported in the literature that there is a higher rate of hospital presentation and admission of males than females, irrespective of season. For example, a large patient series in Germany has reported that males constituted approximately 70% of all burn injury patients (12). Studies from other countries have shown similar results. In a study by Schiefer et al. it has been shown that the presentation rate of male patients was higher in all months, and in summer months, this rate was further increased. The same study has reported that the rates of female patients were relatively increased in the months of December, January, February, and March (13). Consistent with these findings in the literature, the rate of male patients in the current study was 68.7%.

When the patients were evaluated in respect of age and season, there was no difference between the groups (p= 0.790), but in winter and summer months, individuals aged >65 years were seen to be more exposed to boiling liquid burn injuries. Similar to the findings of Williams et al. (14), the main reason for this was thought to be that these patients spent more time at home in these periods and probably were exposed to accidents in the house.

There are different opinions on the subject of the seasonal relationship with the development of burns. While there are studies from developed countries showing no difference between the seasons of the year in respect of burns injuries (12,13) studies from developing countries have reported seasonal differences (14,15). One of the noticeable points in the studies published in developing countries is that the causes of burns are directly affected by conditions such as the geographic features of the region, seasonal condition, and the level of development. For example, in a study published by the Tampa General Regional Burns Centre, burns patient admissions reached a peak immediately after the end of the hurricane season related to accelerants used for the destruction of rubble (16). In a large-scale (n= 3515) pediatric study in Australia, winter has been reported to be the season of most boiling liquid and flame injuries, but this has not been observed for contact burns (17). Hultman et al. have evaluated 740 patients and reported that spring was the season with the highest rate of hospitalizations (15). In another study of 1600 patients in the Dominican Republic, it has been reported that the demographic profile was seen to have an effect on electrical burns, but there was not seen to be any statistically significant difference in the mechanisms of burn injury according to season (7). Tyler et al. have shown that the frequency of boiling liquid and flame burns was greater and although the seasons had no effect on mortality, the incidence of burns was higher in the winter months (5). In the current study, summer was seen to be the season of most hospitalizations.

Although patient hospitalizations have been reported in the literature to be higher in autumn and winter, the seasonal shift to summer seen in the current study was thought to be due to the conversion from apartment block central heating systems to individual home heating in the last 15 years in this region where our center is located, as it is a region which is highly developed. Williams et al. have similarly evaluated a 10-year period of hospital admissions, and despite an increase in winter, in the last two years there was an increase in presentations at the burns center in the summer similar to in winter (14). No reasons for this were given by Williams et al. but in the current study, this was thought to be due to an increase in workplace accidents in summer and the fact that in the rural areas of our region, it is traditional at the end of summer to prepare sauces, molasses and cheese over an open fire, and that chemical and electric burns could contribute to these results in the warmer months of spring, summer and autumn.

The most important limitation of this study is its retrospective design. However, our clinic is the most important reference burns center in the region, and records have been kept electronically for more than ten years in addition to the written records system still being maintained, and therefore, data loss can be considered to be at a minimum level.

The results of this study clearly showed that there was a seasonal effect on the mechanisms of burn injuries. It was also seen from literature review that seasonal predominance and the mechanisms of burn injuries could show differences. The results of the current study demonstrated an increase in electrical and chemical burns in warmer months. In this context, it can be seen to be necessary for burns units to investigate seasonal incidences of the region and to be prepared for potential accidents.

The authors are not related to any support and financial participation (eg employment, consultancy, honorary, stock ownership and options, expert statement, patents received or pending, copyrights) in the past three years. They also declare that they are not involved in nonfinancial relationships (personal, political or professional) that may affect the writing of the article.