A comprehensive study of mesoappendix and arterial pattern of appendix

Objective: The length and the attachment of the mesoappendix is important in the degree of inflammation, spread of tumor and during surgical resection of the appendix. The presence of accessory appendicular artery along with varied origin of appendicular artery may cause intra- as well as post-operative complications. Hence, the study of length of mesoappendix and the origin and branching pattern of arterial supply to the appendix was undertaken.

Material and Methods: Sixty formalin fixed appendix specimens were resected along with the intact mesopappendix and were dissected to analyze the extent of attachment, origin of appendicular arteries and the accessory branches as well.

Conclusion: The mesoappendix and the branching pattern of the appendicular artery varies from person to person, and this awareness will be of use during surgeries on appendix.

The vermiform appendix is located in the right lower quadrant of the abdomen and is one of the important differential diagnosis in case of pain (1,2). Its length varies from 2-20 cm, with an average length of 9 cm (2,3). The attachment of the base of the appendix to the caecum remains constant, whereas the tip can be found in a para-colic/para-caecal (11 o’clock), retrocaecal (12 o’clock), splenic (2 o’clock) position, promontoric (3 o’clock), pelvic (4 o’clock), midinguinal/subcaecal (6 o’clock) position, pre-ileal and post-ileal positions (1,2,4).

Vermiform appendix is connected by a short mesoappendix to the lower part of the mesentery of the ileum enclosing the appendicular artery and the inferior ileocaecal recess (2). The terminal part of the artery lies on the wall of the appendix and hence may be thrombosed in appendicitis, resulting in distal gangrene and necrosis. In about 50% of the cases an accessory artery of Dr. Sheshachalam (5), a branch of posterior caecal artery is present and needs separate ligation during appendectomy. Thrombosis of this artery, in acute appendicitis, inevitably results in gangrene and subsequent perforation. Appendicitis is the most common cause of acute abdomen (4,6). Identification of the normal position of the appendix is important because in appendicitis, variable positions may produce symptoms and signs related to their position, and hence can mimic other diseases (7,8). According to Lohar et al. (9), the age group of the incidence of appendicitis is 11-20 years constituting 44.6%, 21-30 years constituting 36.1%, 31-40 years constituting 11.5% while between 0 and 10 years age group, it was 3%, and between 41-50 years and 51-75 years of age group, it was 2.3% each in India in 2021. Hence, the rate of appendectomy is higher, and intra-operative and post-operative complication of hemorrhage in cases of accessory appendicular artery is more common. Short mesoappendix can cause the appendix to necrose in case of inflammation, as appendicular artery, which is as such an end artery, to be more nearer to the wall. This study aimed at studying the length of mesoappendix and the arterial pattern of the appendix in detail.

The present study was performed on 60 specimens of human vermiform appendices. The study was done in situ in the cadavers before the appendix was displaced by manipulation and dissection from the right iliac fossa. The abdomen was opened by a long midline incision and the flaps were reflected to give a good view of the abdominal cavity along with its contents. The appendix was studied along with its relation to the ileum and caecum. All taeniae of the caecum converge to the base and acts as the best guide for the vermiform appendix. The extent of the mesoappendix was studied. Specimens fixed with 10% formalin were initially washed with free-flowing tap water to wash away the formalin so as to avoid irritation to the eyes and nasal mucosa. It also caused softening of the fixed tissue. After clearing the mesoappendix, the appendicular artery was visualized. The number of arteries present in it was noted down. To find the branches of the artery, the tracing was done proximally, carefully observing if it was a single artery or a double artery. Then, the parental arteries were identified and recorded. When dissecting and clearing the arteries closer to the appendix, the branching pattern, anastomotic pattern and the end arteries were noted. Some arteries after supplying the tip of the appendix passed posterior to the appendix and supplied that aspect separately. All the arteries were accompanied by their respective veins and nerves.

The following results were obtained by observing the extent of the mesoappendix and arterial pattern of appendix in 60 vermiform appendices:

• Extension up to whole length of the appendix in 46 specimens,

• Extension up to 2/3 of length of the appendix in 14 specimens,

• Extension up to half of the length of the appendix in none of the specimens. 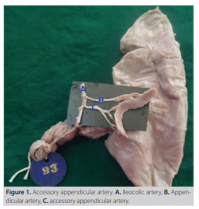 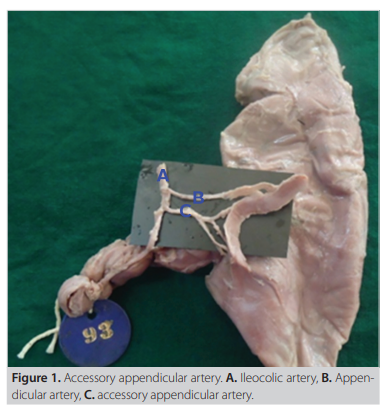 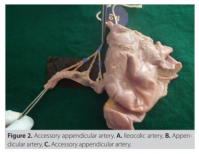 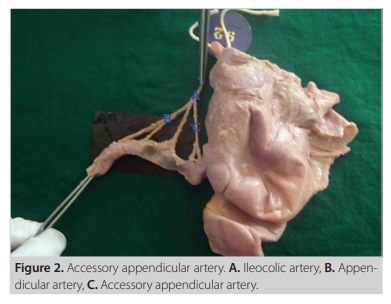 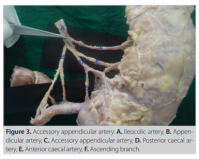 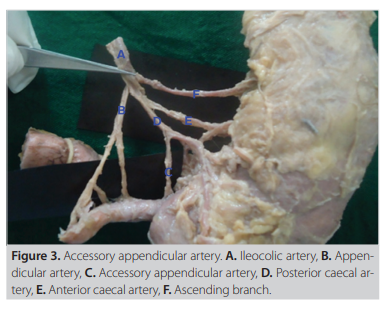 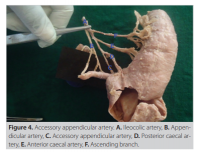 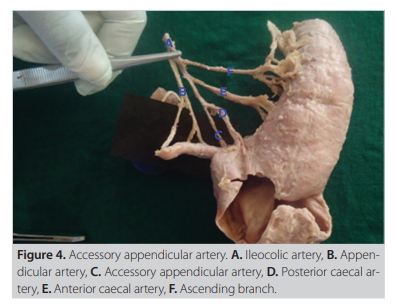 This study aimed exclusively to get an in depth insight on the attachment of mesoappendix and the origin and branching pattern of arteries supplying the appendix. In this study, the extent of mesoappendix till the tip was found to be 76.6%. On reviewing the literature, the study done by Geethanjali in 2011 had the nearest incidence of 69.23% (13). According to the study by Anderson et.al., the mesoappendix reached the tip of the appendix in 80% of the cases (10). According to Tahir Iqbal in 2012, there was a long mesoappendix frequently extending up to the tip of the appendix and often an ileo-caecal fold (14).

Surgical interest in the appendix has been aroused since 1886 by the recognition of its inflammation by Reginald Herbeit Fitz. The different anatomical studies performed on appendix concern its localization and its vascularization with the objective of improving the techniques of its ablation. In 1980, Mitroffanof successfully used an appendix for the treatment of an incontinent bladder (Appendiculovesicostomy). Since then, vascularized appendix has been used on its pedicle, and subsequently in free transplant, with success, to rebuild ureters, urethras, the uterine tubes and extra hepatic biliary tract. According to Djibril Ouattaraa knowledge of its vascularization is indispensable to guarantee the survival of the whole of the transplant (16).

In this study, appendix was supplied by a single appendicular artery in 87% of the cases, but accessory appendicular artery was also found to be present in the mesoappendix, and it was seen arising from various closely related arteries. In the African population (20), the incidence is totally in contrast, as there were 80% of cases showing the presence of an accessory appendicular artery, and in 20% of cases supplied only by single appendicular artery. In this present study, the incidence of double appendicular arteries supplying the appendix was about 13%. The same has been observed by Nirmaladevi as 10% (21) and Toriola as 9% (20) but not by Ashwini Balasaheb, which has been found as 40% (22). The accessory appendicular artery was seen to originate in contrast from the main branch, predominantly from posterior caecal artery than the ileocolic artery in our study as in concordance with Ajmani et.al (23), though we differ in that, there were no accessory arteries arising from anterior caecal artery. Solanke et al. (24) have cited that there were extensive arterial anastomoses between the arteries supplying the appendix. We differ and contradict this statement, as there were nil arterial anastomoses observed in the current study, confirming that each individual branch was its own end artery, confounding the risk of gangrene. The anastomotic pattern can really be studied by injecting a suitable dye and the pattern of distribution seen by radiological examination in the living, which is the further scope of this study.

For this study, it is not necessary to have the ethical approval because this is a cadaveric surgery.

The authors are not related to any support and financial participation (eg employment, consultancy, honorary, stock ownership and options, expert statement, patents received or pending, copyrights) in the past three years. They also declare that they are not involved in nonfinancial relationships (personal, political or professional) that may affect the writing of the article.