Median arcuate ligament syndrome (MALS) occurs as a result of compression of the celiac artery by a fibrous band called the median ligament, which originates from the diaphragmatic crus. The prevalence of MALS has been reported as 10-24% among patients. The etiology is not clear. The components of the clinical triad are a chronic post-prandial pain, epigastric murmur and weight loss. Diagnosis is based on clinical and radiological findings. MALS has been reported in a small portion of patients undergoing pancreaticoduodenectomy. Most of the patients have been diagnosed prior to surgery.

Median arcuate ligament syndrome (MALS), also known as celiac artery compression syndrome, is characterized by gastrointestinal ischemia occurring as a result of compression of the proximal part of celiac trunk by the median arcuate ligament that originates from the diaphragm (1). The etiology is not clear. The majority of patients are asymptomatic under normal conditions. However, it can lead to life-threatening organ ischemias when collateral circulation from the superior mesenteric artery is interrupted during surgery such as in pancreaticoduodenectomy operation (2-4).

In this report, we wanted to present a case with MALS diagnosed intraoperatively during pancreaticoduodenectomy.

The forty-three-year-old male patient presented to our hospital with complaints of jaundice and itching. His laboratory results showed a serum bilirubin level of 3.2 mg/dL. Abdominal ultrasonography and computed tomography (CT) revealed a mass lesion with a size of 3 x 2.5 cm at the head of the pancreas, which raised suspicion of pancreas cancer. Contrast-enhanced abdominal CT did not show any pathology associated with the arterial structures or any sign of arterial invasion. A fine needle aspiration biopsy was performed from the mass lesion at the head of the pancreas under endoscopic ultrasonography guidance. The biopsy result was reported as malignant cytology. The patient was taken into operation. After liberating the pancreatic head with Kocher maneuver and ligating the gastroduodenal artery, it was observed that there was no flow in the hepatic artery, left gastric artery or splenic artery. During surgery, the radiology clinic was requested to re-evaluate the patient’s abdominal CT images. As a result of this re-evaluation, complete occlusion was noticed in the celiac trunk, caused by compression by a median arcuate ligament (Figure 1). Following excision of the median arcuate ligament, pulsatile flow was observed in the hepatic artery, left gastric artery and splenic artery. Pylorus-preserving pancreaticoduodenectomy operation was performed. A control CT was performed postoperatively. Celiac trunk and its branches were observed filling with contrast (Figure 2). The patient was discharged on a postoperative 8th day without any problems. 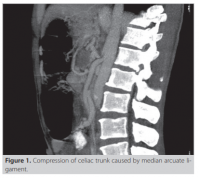 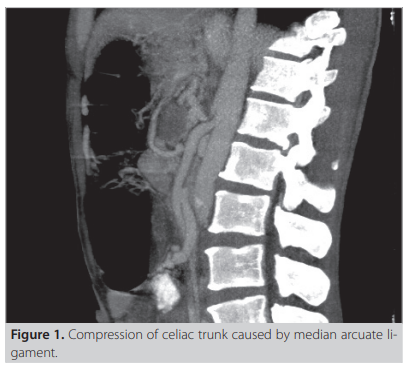 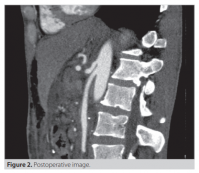 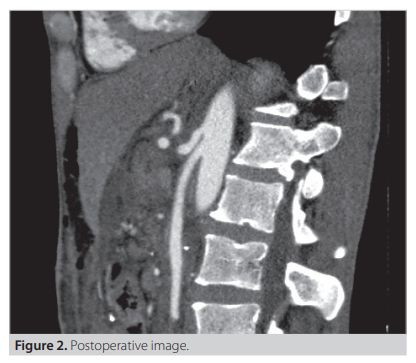 Diagnosis is based on clinical and radiological findings. Radiologically, its diagnosis can be made with Doppler ultrasonography or CT angiography. Lateral projection in CT angiography is highly sensitive in detecting obstruction in the celiac axis (1,3,4). The clinical triad consists of chronic post-prandial pain, epigastric murmur, and weight loss. MALS can be detected in 10-24% of patients. Patients are usually asymptomatic. It is often seen in young adult patients. The classical findings are not present in the majority of patients due to the presence of collateral circulation coming from the superior mesenteric artery (2). The classical treatment of MALS is surgical excision of median arcuate ligament fibers.

It has been reported that median arcuate ligament syndrome is observed in a minority of patients undergoing pancreaticoduodenectomy and that diagnosis is often made preoperatively in these patients (4). Our case was not diagnosed preoperatively and during the operation, the lack of pulsatile flow in the hepatic artery following ligation of gastroduodenal artery raised the suspicion of MALS or celiac artery occlusion due to atherosclerosis, and the diagnosis was made after re-evaluation of patient’s CT images. As laparoscopic pancreaticoduodenectomy operations become more common, it becomes more difficult to diagnose the complications caused by MALS intraoperatively. During preoperative radiological evaluation of tumors of the periampullary region, attention is mostly focused on the tumor’s relation with vascular structures and its operability, while conditions that can cause occlusion in the celiac artery can be overlooked. It should be kept in mind that, although rare, celiac artery occlusion caused by atheroma plaque or MALS can accompany these tumors. Therefore, careful preoperative radiological assessment of patients who are planned to undergo pancreaticoduodenectomy will aid to reveal MALS and to reduce its vascular complications and the associated morbidity and mortality. In all patients, pulsation in the hepatic artery should always be checked after clamping the gastroduodenal artery (3,4).

It should be kept in mind that in patients with celiac artery stenosis or occlusion, ligation of the gastroduodenal artery during pancreaticoduodenectomy operation will lead to impairment in the blood supply of upper abdominal organs, which can possibly result in mortality. Therefore, celiac trunk and its branches should be carefully evaluated before pancreaticoduodenectomy operations.