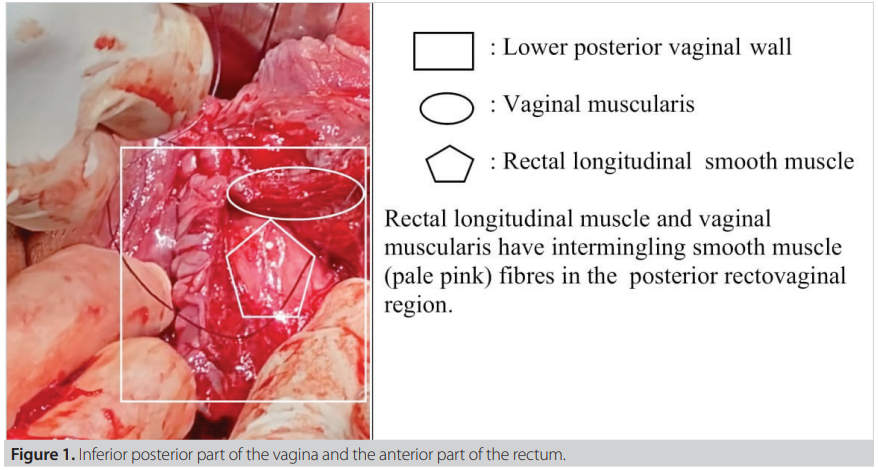 In the interviews, AI scoring questionnaires were applied. It was questioned whether the patients developed postoperative wound dehiscence, bleeding and wound infection. They were asked whether they received treatment support due to AI.

The fibromuscular structure that connects the inferior posterior part of the vagina and the anterior part of the rectum is defined as the perineal body (Figure 1). In this structure, there are bulbosupongiosus and superficial transverse perineal muscles, and longitudinal and circular smooth muscles of the rectum. The smooth muscles are morphologically pale pink (Figure 2) (15,16). Each laceration of the lacerated structures in the perineal body was sutured one by one with 2/0 polyglactin. In the anterior anal canal is the EAS, which is composed of striated muscle that surrounds these smooth muscles (pale pink) like a band (Figure 3) (15,16). After the EAS had been determined, if the free muscle bundle was of sufficient length, it was sutured with 2/0 polyglactin using the overlapping technique. The external muscle bundle which did not have sufficient length was sutured end-to-end with 2/0 polyglactin without being dissected from the surrounding tissues (in order not to disturb its blood supply and innervation by dissection). 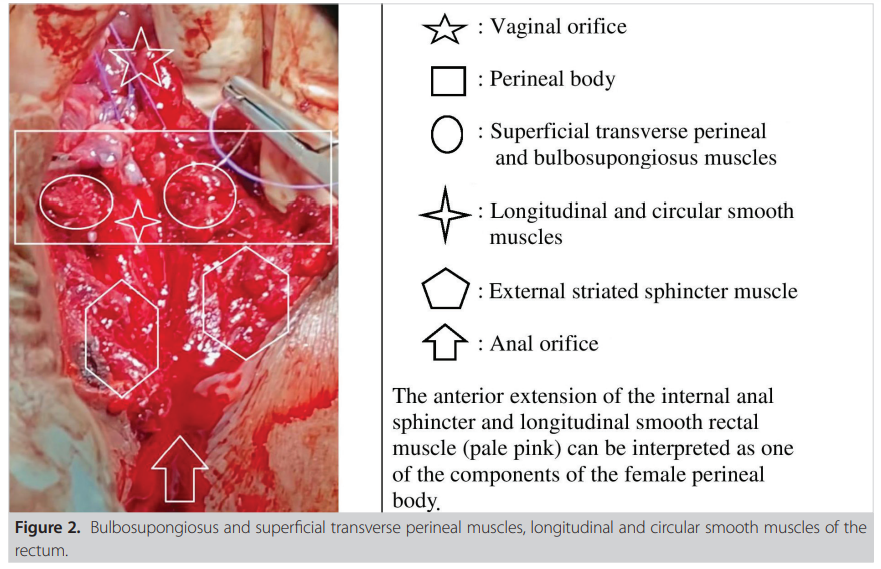 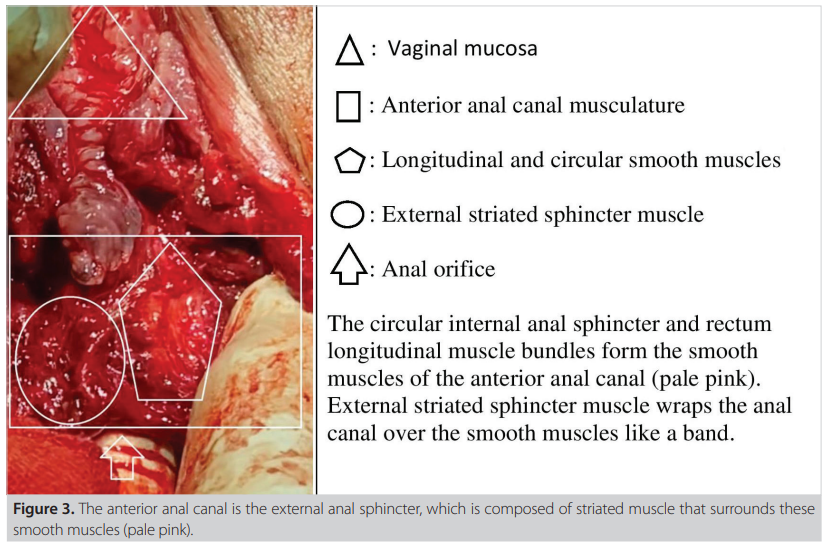 Statistical analyses; SPSS 26.0 (IBM Corporation, Armonk, New York, United States) program was used in the analysis of the variables. While conformity of the data to normal distribution was evaluated with the Shapiro-Wilk test, the homogeneity of variance was evaluated with the Levene test. One-Way ANOVA (Robust Test: Brown-Forsythe) test with bootstrap results and Jonckheere-Terpstra test and Monte Carlo simulation technique were used in the comparison of quantitative data of more than two groups. Fisher Freeman Halton Test and Monte Carlo simulation results were used to compare categorical variables with each other. Column ratios were compared with each other. P-value with Benjamini-Hochberg correction was expressed according to the results. Spearman’s rho test was used to examine the correlations of the variables with each other. Quantitative variables were expressed as mean (standard deviation) and median (minimum/maximum) in the tables. Categorical variables were shown as (%). Variables were analyzed at 95% confidence level, and p value less than 0.05 was considered significant.

Table 5. RAFIS and Wexner incontinence survey results of the patients according to the groups

In cases of OASIS undergoing primary sphincter repair, the most common cause of FI is failure of the repair (7). The success rate in the treatment of FI is low (17). Therefore, the primary goal is to prevent the development of FI. Accurate determination of sphincter damage and providing appropriate anatomical reconstruction of the sphincters is crucial in the treatment of OASIS. Therefore, it is recommended that the sphincters be identified and repaired by experienced surgical teams (18). In our study, the perineal body structures and sphincters of patients that developed OASIS were repaired separately by experienced surgeons immediately after delivery. This approach led to low AI and FI rates in the short and long term.

In our study, manometric measurements showed that median RP of the anal canal was 35 mmHg (normal range= 59-74 mmHg), while median SP was 67 mmHg (normal range= 88.5-111 mmHg). Both values were below normal limits. The rates of AI and FI were 18.75% and 12.5%, respectively, while the rate of severe incontinence was 6%. In their study with 372 cases, Turel et al. (6) have performed anal manometry in 13 of 19 patients with grade 3c/4 sphincter damage and reported RP of 14.7 mmHg and SP of 40.7 mmHg. They have reported FI rate of 12% and AI rate of 51% in those with grade 3c/4 type injuries. In this study, similar to our study, anal canal RP and SP were low, while FI rates were similar. IAS defect and levator avulsion have been found to be independent risk factors for AI. They have stated that the repair of the IAS and levator muscle defect is important. In their study involving 181 patients, Patton et al. (7) have reported Grade 4 injuries in 10 (6%) and Grade 3c injuries in 26 (14%) patients. FI rate has been found as 46% and more common in patients with low anal RP compared to those with normal RP. In addition, patients with low SP and normal SP did not differ significantly in terms of FI rates. This result emphasizes the importance of IAS repair. It has been noted that IAS anal sphincter injuries are often overlooked in OASIS. This was thought to be due to the fact that the IAS is thin and is located behind the larger EAS (3,7). In Gommesen et al.’s (2) study including 575 patients with sphincter injuries, it has been reported that 20 patients had Grade 3c and 15 patients had Grade 4 injuries. The rate of FI has been indicated as 35% in Grade 3c and 33.3% in Grade 4. In this large series study, the high rates of FI after primary repair have been attributed to two reasons: inadequate repair of the sphincters or recurrent injury to the sphincters (6). Anglim et al. (19) have reported major sphincter injury (Grade 4= 28, Grade 3c= 47) in 75 (17%) of 362 patients in their prospective study. The AI score in major sphincter injuries has been found low. The reason behind this low rate was that the degree of injury was determined well and the IAS was detected and repaired separately. Similarly, in our study, the low rate of FI compared to the literature may have been due to detecting and suturing the sphincters separately and careful reconstruction of the lacerated perineal body structures (puborectal muscle, perirectal and paravaginal fascia, bulbocavernosus muscle, superfacial transverse perineal muscle). Soerensen et al. (20) have found that short anterior sphincter length after primary repair correlated with FI. This result increases the importance of reconstruction of the lacerated area as a whole and supports our hypothesis. On the other hand, in our study, it was observed that the AI score of one case (6%) that developed severe AI remained the same in the postpartum short and long term (>1 year long term). The reason for occurrence of severe FI in the early postpartum period and its persistence in the long-term may be the failure of the primary repair.

In recent studies, it has been detected that levator ani muscle injuries are seen at a rate of 21% in OASIS. It has been determined that there is an independent risk factor for the development of AI (6). The levator ani muscle surrounds the rectum posteriorly and is located to the right and left of the rectovaginal region (21). Since the laceration was in the media line in our study, the attention of the repair team might have caused the levator muscle damage to be overlooked. Severe AI seen in 6% may have developed for this reason.

It has been reported in the literature that complications such as severe wound infection, bleeding and wound dehiscence develop after perianal reconstruction. For these reasons, it has been suggested that the primary repair is impaired and AI develops (22). In our study, however, no serious postoperative wound complication developed. This may be a supporting factor in the low rate of AI.

In IRAIR, there is a sudden increase in pressure in the rectal wall with the accumulation of gas, fluid, and stool in the rectum. This change signals that defecation will begin. This stimulus is the sensorimotor mechanism that activates the mechanisms that help maintain continence or are effective in the realization of defecation (26). This reflex is negative in Hirschsprung’s disease without rectal wall sensitivity, in spinal cord injuries, and causes AI to develop (27). Pudendal nerve neuropraxia may develop due to nerve traction during vaginal delivery. This can also cause temporary (28). However, AI due to pudendal nerve injury has not been elucidated in the majority of studies (29). In our study, RAIR positivity in all patients excludes serious nerve damage in our patients. This result indicates that the probability of developing this damage in OASIS may be below.

In their study of 1453 cases, Thomas et al. (17) have performed EAUS evaluations and reported the rate of normal sphincter function after primary repair as 3%, and sphincter defect in 53%. This study is also significant in terms of demonstrating the failure of primary repair. In a study evaluating the adequacy of the delivery team, it has been reported that 87% of midwives, 28% of newly trained doctors, 14% of trained doctors, and 1% of specially trained team overlooked sphincter injuries (30). Another study has compared the outcomes of primary sphincteroplasty repairs performed by surgeons in training and experienced surgeons and reported higher rates of significant sphincter defect in the training group (31). These results support the importance of having an experienced team when diagnosing and treating sphincter injuries. Therefore, having an experienced team was one of the strengths of our study.

In the literature, different results have been reported in overlapping and end-to-end repairs in sphincter repair. However, in the last randomized controlled study, it has been reported that there was no difference between the results of both methods (32). In our study, overlapping was preferred in Group 1 and end-to-end repair type was preferred in Group 3. However, they were cot comparable as follow-up times were different in both groups. In our study, it was the first preferred method if it was suitable for EAS overlapping.

There are serious long-term failures of secondary repair of sphincter insufficiency that develops after primary reconstruction. In secondary repairs, rectal manometric pressures increase at first, and although there are successful results in the short term, the failure rate is high in the long term (3). Barbosa et al. (12) have evaluated long term incontinence in 486 patients that underwent secondary sphincter repair and observed that 75% developed fluid and 54% developed solid incontinence. In another study of 191 cases undergoing secondary repair, complete continence has been achieved in 6% in 10-year follow-up, while 94% developed AI and 58% developed FI (33). According to these results, no matter how well the secondary sphincter repair is performed, the continence score will remain low. Therefore, meticulous primary repair is crucial.

There are some limitations of our study. These are single center and retrospective design, small number of patients, and lack of EAUS in the follow-up of the patients.