Objective: Currently, sphincter-saving procedures are increasingly performed in the treatment of low rectal cancers. This study aimed to evaluate the outcomes of patients who underwent intersphincteric resection.

Material and Methods: This was a single-center, retrospective, cross-sectional study. We evaluated the electronic data files of 29 patients who had intersphincteric resections at our institute between 2008 and 2018. Bowel function outcomes were assessed prospectively using Wexner incontinence score. Histopathological, surgical and functional outcomes were analyzed.

Conclusion: In the treatment of distal rectal cancer, adequate oncological surgery and relatively acceptable functional outcomes can be obtained with intersphincteric resection technique in suitable patients.

The aim of this study was to report the functional outcomes after ISR.

Twenty-nine patients, including 20 males and nine females, were included in the study. The characteristics of the patients included in the study are shown in Table 1. When evaluated in terms of the indications for surgery, two patients had in situ carcinoma that was not suitable for local excision. All of the other patients had well or moderately differentiated adenocarcinoma. Long-term neoadjuvant chemoradiotherapy was administered to 21 patients. When measurement was performed using a rigid rectoscope, mean distance of the tumor from the anal verge was 3.51 ± 0.63 cm. Distal and circumferential surgical margins were tumor-free in all patients. The excision of the posterior vaginal wall was performed in one patient with suspicion of tumor invasion. On pathological examination, mean distal surgical margin distance was 1.79 ± 0.7 cm. Pathological complete response (ypT0N0) was achieved in two patients. The number of removed lymph nodes was 14.6 ± 8.4 (4-32). Postoperative histopathological results are shown in Table 2.

Twenty out of the 29 patients still had functional anastomosis, which is shown in Figure 1. Fecal continence status was assessed by reaching all of these twenty patients. In the primary anastomosis group, 14 patients had a functional stoma because five patients had mortality and two patients had a permanent stoma due to anastomotic stricture. 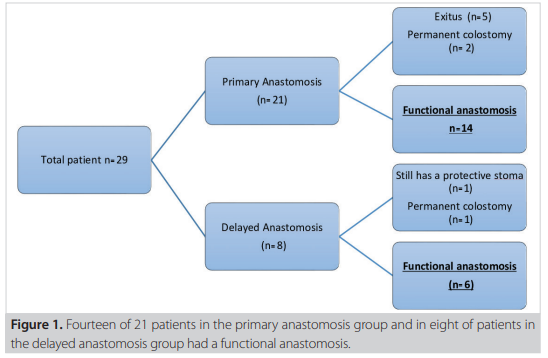 In the delayed anastomosis group, six patients had a functional anastomosis as diverting stoma closure had not yet been performed in one individual at the time of the study and one had permanent stoma due to local recurrence. Mean Wexner incontinence score of all patients was 8.35 (0-17) (Figure 2). While 65% of the patients (n= 13) had a good continence status, 35% (n= 7) had poor continence status (Wexner score> 8). According to univariate analysis, no relation was found between continence status and sex (p= 0.651), distance of the tumor from the anal verge (p= 0.608), T stage (p= 0.370), distal surgical margin distance (p= 0.439), and lymph node involvement (p= 0.587). 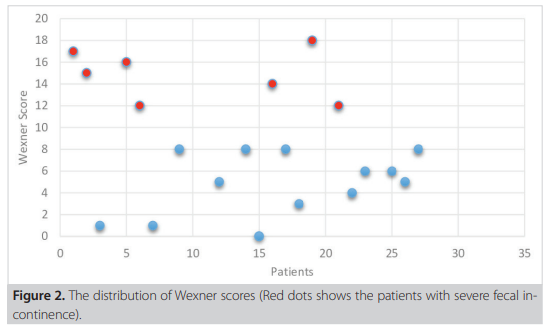 Table 3. Wexner incontinence scores according to type of anastomosis

Table 4. The relationship of the variables with severe fecal incontinence (Logistic regression analysis)

This study presented functional outcomes of 29 patients undergoing ISR for low rectal cancer. These results revealed that R0 resection could be achieved in all patients using the sphincter preservation technique, and a good functional outcome could be achieved at a rate of 65%. The treatment of rectal cancer is constantly evolving. TME and neoadjuvant therapies have been introduced into routine practice to reduce the high local recurrence rates in the treatment of rectal cancer. Abdominoperineal resection is still used as the gold standard treatment method in many patients with distal rectal cancer (9,10). When adequate oncological outcomes are achieved, the efforts are directed to the development of new methods to avoid performing permanent colostomy in patients and achieve better functional outcomes. As a result of these investigations, Schiessel et al. have described ISR in very low rectal tumors (3).

There is no standard method for evaluating bowel function after ISR. In this study, we evaluated bowel function with Wexner incontinence score which offers an easily understandable and objective assessment of the patient (14). In this study, mean Wexner incontinence score of the patients was 8.35 (0-17). Different cutoff values have been used in the literature to define the severity of fecal incontinence with the Wexner score. As originally described by Rothbarth et al., a Wexner score of ≥9 is usually associated with complete gas incontinence and more than one fecal incontinence per month, and these patients experience limitations in their social lives (15). Upon considering a Wexner score of nine as a cutoff value for incontinence, 65% (n= 13) of the patients in our study had an good continence status, whereas 35% (n= 7) had poor continence. Although the mean of Wexner scores is 8.35, a score of 8 or less in 65% of patients may seem like a consistency. This can be explained by the fact that some patients have very high scores. The distribution of the patients’ Wexner scores can be seen in Figure 2. It is important to manage patient expectations well and inform the patient accurately. Similar to most studies, ISR achieved not perfect but acceptable functional outcomes in our study. A cutoff frequency for acceptable functional outcome has not been defined. Saito et al. have considered a Wexner score less than 10 to be a “good” functional outcome and reported that 70% of the patients in their series had good continence after intersphincteric resection (16). In their series evaluating 101 patients, Denost et al. have found that the median Wexner incontinence score was 11 and 47.5% of the patients were classed as having a good functional result (Wexner score≤ 10) (17). These functional results are not perfect but tolerable for many patients. Consequently, a realistic conversation should be made with the patients before surgery regarding acceptable outcomes. It must be explained that the average expectation will not be complete continence but will involve gas incontinence, partial soiling, and partial liquid incontinence in most patients. During the planning of the surgery, open discussion with the patient is required, mentioning that the procedure is an alternative to permanent colostomy and not to normal defecation (18).

In 1961, Turnbull from Cleveland and Cutait from Brazil independently described a delayed coloanal anastomosis after a pull-through procedure (24,25). With the advent of stapled anastomoses, this method has lost its popularity. The Turnbull-Cutait technique is currently used to prevent the formation of a permanent stoma in selected cases with pelvic sepsis due to anastomotic leakage, rectovaginal or rectourethral fistula, and perianal involvement in Crohn’s disease (26). A systematic review of seven retrospective studies has demonstrated that the Turnbull-Cutait technique reduced the likelihood of opening permanent stoma while offering low rate of anastomotic leakage and pelvic morbidity along with reasonable fecal continence (27). The use of Turnbull-Cutait technique has recently gained currency in patients undergoing elective procedures. In a recent randomized controlled trial, Biondo and colleagues have compared the two-stage Turnbull-Cutait anastomosis with the primary anastomosis after ISR in cases with very low rectal cancer (28). They have demonstrated that postoperative complication rates and oncological and functional outcomes of the two groups at one year were similar. Based on the results of this multicenter randomized controlled trial, the authors have argued that a delayed coloanal anastomosis could be a valid alternative strategy to avoid transient stoma. In our study, a two-stage anastomosis was performed in eight patients, and the number of patients was insufficient to make a subgroup analysis.

Retrospective, single-center study design and small size of the study population are important limitations of the present study. Another limitation is that the assessment time of the patients was not homogeneous since the present study evaluated the current functional status of the patients ,and the follow-up durations were different among the patients. The strengths of the study are the prospective performance of functional assessment, accessibility of all the patients who survived, and being one of the most extensive patient series published in our country.

In conclusion, tumor-free surgical margins and acceptable functional outcomes can be achieved in suitable patients with ISR technique in the treatment of very low rectal cancer. ISR is an alternative that can save patients from permanent colostomy. It is essential to manage patient expectations and thoroughly inform the patient.

This study was presented at the 14th Scientific and Annual Meeting of the European Society of Coloproctology in Vienna, between 25-27 September 2019.