Heterotopic ossification (HO) is a bone formation in a tissue other than the skeletal system. It is more often seen as a complication of orthopedic surgery; however, it is a pathological condition that might be observed during the healing process of abdominal incisions in the midline. The aim of this study is to present a case of a 63-year-old male patient with the complaints of induration and pain on the region of his previous incision through which he had been operated for achalasia. HO is also discussed in the light of the current literature.

Heterotopic ossification (HO) is the formation of new bone tissue in soft tissues in which no ossification is present normally. Based on the etiology, HO is classified as neurogenic HO, traumatic HO and myositis ossificans progressiva. It is more common in large joints after orthopedic surgery. The hypothesis of stimulation of mesenchymal cells through tissue hypoxia and metabolic or genetic factors to form a bone tissue by metaplastic transformation is generally accepted, although the pathophysiology of the condition has not been clearly understood yet.

A 63-year-old male patient who had undergone esophago-cardiomyotomy at another center two years ago for achalasia applied to our clinic with the complaints of induration and pain in the incision area. His past medical history was otherwise nonspecific. Upon physical examination, a palpable mass was present on the upper half of the midline incision. Abdominal ultrasonography (US) revealed an area of the increased density measuring 1 cm in width and 5 cm in length which was considered a collection. No opacity could be seen on chest X-ray at the region of the lesion. A hard mass on linea alba in the subcutaneous fatty tissue, measuring 8 cm in length was found to be fixated to the surrounding tissue at laparotomy. The mass was seen to be close to xiphoid process with no direct contact with it. The mass was excised, and the wound was primarily closed. The specimen was sent for pathological examination. Macroscopic examination revealed a bone tissue measuring 8.5 x 1 x 0.5 cm (Figure 1). Microscopic examination disclosed organized cortical and medullary lamellar bone and fatty bone marrow in fat and connective tissue (Figure 2). The mass was diagnosed as heterotopic ossification when its localization was also taken into account. 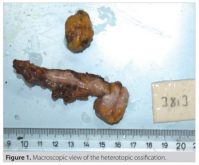 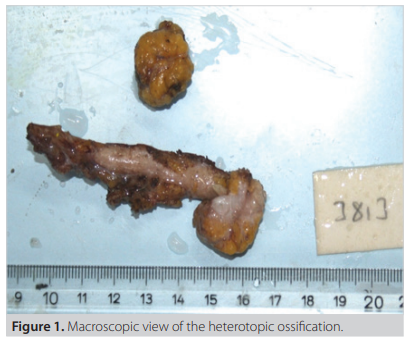 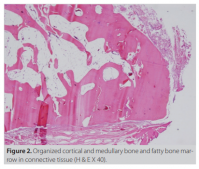 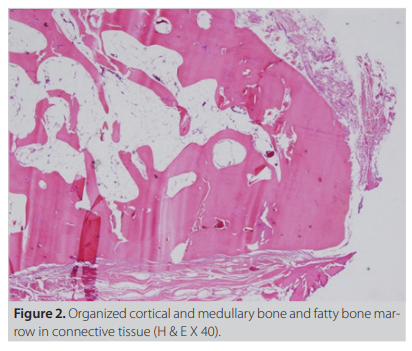 The patient was discharged on postoperative day four because he was from another city. There were not any postoperative complications. The lesion was seen to be completely resolved during the follow-up visits.

Heterotopic ossification is the formation of bone tissue in areas other than the skeletal system such as skin, subcutaneous fat, scars or mesenteric tissue (2,3). The etiology and pathogenesis of HO demonstrated to have a real osteoblastic activity and bone formation at histological examination have not been fully explained yet. The hypothesis of stimulation of mesenchymal cells through tissue hypoxia and metabolic or genetic factors to form a bone tissue by metaplastic transformation is generally accepted for the pathogenesis of the condition. The condition is generally evaluated in three groups: a) Neurogenic HO: The spasticity, long-term comatose condition and exposure to immobilization in patients with head trauma play role in the etiology in this group (4,5); b) Traumatic HO: It develops following fractures of the hip, elbow, and knee and after orthopedic surgery (5); c) On the other hand, myositis ossificans progressiva is a congenital disease with an autosomal dominant inheritance (5).

HO might be seen following abdominal and vascular surgery, although it has been known to be a complication of orthopedic surgery. Kim et al., in their study, reported the incidence of HO to be 25% by postoperative computed tomography evaluation of 152 cases that had abdominal incisions (1). It is more common in men compared to women (89%) (6). It was proposed by some authors that increased abdominal pressure caused an increased suture line tension in men due to heavy work load (7, 8).

Another assumption is inoculation of pieces of periosteum or perichondrium separated from the xiphoid process or the symphysis pubis during a surgical operation (2). In this case reported here, no connection was seen between the xiphoid process and ectopic bone during the exploration.

Patients may suffer from limited mobility, pain and induration in the area of the incision. A palpable mass can be found at the incision line on physical examination. Direct X-rays, US, CT, and magnetic resonance (MR) imaging can be used for diagnosis in case of suspicion of HO. Differential diagnosis includes postoperative complications such as foreign materials and wound infection and neoplasms. This formation was reported as a fluid collection in the US performed in our radiology department. We believe that the presented pathology is infrequent and radiologists are not familiar with this image. Some insufficient evidence is present in the literature on the use of non-steroidal anti-inflammatory drugs such as indomethacin and bisphosphonates in the prevention or treatment of HO in the early period (9,10). Although there is no standard method for the treatment of the condition, the most frequently used surgical treatment option is excision and primary closure. Some authors, considering the differentiation effect of mechanical stress on pleuri-potent stem cells, prefer some reconstruction techniques such as tension-free repair or component separation in surgical treatment (11,12).

The application of radiation therapy following abdominal surgery is debatable due to its side effects, while it is recommended after orthopedic surgery to prevent the development of HO.

Rarely some complications associated with HO might be seen. A tissue of histologically proven HO that was capable of producing triple hematopoiesis with normal function was reported in two case reports during our literature search (13,14). Although HO is a benign lesion, osteosarcoma transformation and fracture of mature lesions following direct trauma are among the reported complications in the literature (15).

HO, generally known to develop following orthopedic surgery can also be seen rarely in abdominal incisions. Radiological examination is important in differential diagnosis. Excision and primary closure is an appropriate and safe method in treatment. The authors declare that there is no conflict of interest regarding the publication of this article.