Bronchogenic cyst that is localized to retroperitoneum is a rare clinical entity. It is a congenital malformation generally occuring in the posterior mediastinum due to abnormal development of the foregut. We report the case of a retroperitoneal cyst presented like left adrenal cyst. A 38 years old female was presented with left upper abdominal pain. Endocrinologic evaluation was done and no adrenal hormonal secretion was detected. The cyst was removed laparoscopically. It was confirmed in pathologic examination as a bronchogenic cyst. Bronchogenic cysts should be considered in the differential diagnosis of retroperitonal cysts. Laparoscopic resection of retroperitoneal cysts results in better outcome.

Bronchogenic cysts are rare clinical malformations due to the abnormal development of the primitive foregut between the third and seventh weeks of embryonic life. They are generally localized in the posterior mediastinum because of abnormalities resulting from embryological budding of the bronchial tree. They are rarely localized in the abdomen or in the retroperitoneum (1-3). Bronchogenic cysts are usually asymptomatic unless they are infected or are enlarged enough to compress a nearby organ. Symptoms are variable, related to the location and the diameter of the cyst (3-5). In most cases, retroperitoneal bronchogenic cysts occur on the corpus of the pancreas or left adrenal gland (6).

In this case, we report a laparoscopic total resection of an incidental bronchogenic cyst that looked like a cyst of the left adrenal gland.

A 38-year-old female who had no significant past medical history was admitted with left upper abdominal pain. A complete blood count, serum liver function tests, amylase and lipase were within normal limits. There was no history of palpitation, sweating, hypertension, or exhaustion. All the secretory hormone levels of the adrenal gland were normal. Also, plasma and urine catecholamine metanephrine concentrations and the aldosterone/renin ratio were normal. CEA and CA 19-9 were not elevated. Abdominal MRI axial turbo spin-echo T2-weighted (a) and T1-weighted (b) images revealed a 63 x 25 x 55 mm well-defined, ovoid, heterogenous lesion with hyperintense components (arrows) in the left suprarenal region elevating the crus (Figure 1). 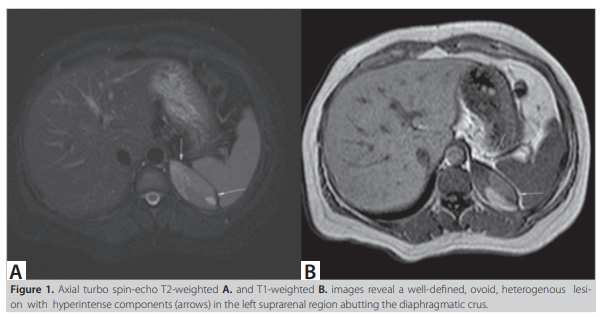 To confirm the diagnosis and to document the risk of malignant transformation, the cyst was removed laparoscopically. The operation was performed in the left lateral decubitus position. Intraoperatively, the mass lesion was associated with the left adrenal gland and diaphragm, It was 60 x 80 mm in diameter. The mass included mucous and fluid as in an abscess. The patient was discharged on the fourth postoperative day.

Pathological examination supported the diagnosis of a bronchogenic cyst. There was no malignant transformation. The examination also revealed cartilage tissue and a mucous gland under the cyst wall (Figure 2). 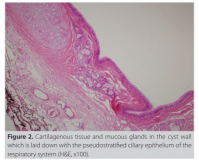 Figure 2. Cartilagenous tissue and mucous glands in the cyst wall which is laid down with the pseudostratified ciliary epithelium of the respiratory system (H&E, x100).
× 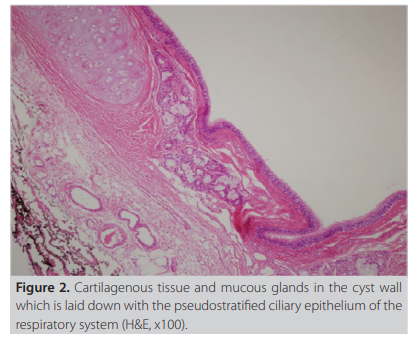 Bronchogenic cysts are the malformations that occur due to the abnormal development of the embryologic foregut in the early period. Their pathogenesis is not fully clear (3,7).

Most of the time, these cysts are localized in the posterior of the carina or are embedded in the pulmonary parenchyma. If total separation occurs during abnormal budding, a cyst may migrate to a different location. The cysts migrate particularly to the subcutaneous tissue around the sternum, shoulder, neck, pericardium, and diaphragm. But retroperitoneal location is extremely rare, at 0.03% (1,2,6,8,9).

Generally, a bronchogenic cyst is asymptomatic and is discovered incidentally. But sometimes back pain and epigastric pain can occur. A cyst can lead to secondary complications; its diameter is under 5 cm normally, but sometimes it can lead to infection, acute hemorrhage, perforation, and the compression of other organs (1,2,6,7,10). Our patient was suffering from left abdominal pain.

Endocrinologic evaluation must be done for the cases in which the bronchogenic cyst is adherent to the adrenal gland or is localized in it. But this study may not be helpful for the diagnosis (3).

Surgery is recommended to make the diagnosis certain, reduce the symptoms, prevent infection, and document the risk of malignant transformation (11,12). An operation can be performed by an experienced laparoscopic surgeon. The laparoscopic approach results in less postoperative pain, a shorter hospital stay, and less cost. Postoperative outcomes are reliable and no complications have been reported (1,7). We did the laparoscopic excision successfully in our patient and there have been no postoperative complications.

A retroperitoneal bronchogenic cyst is a rare clinical entity. For retroperitoneal cysts, a differential diagnosis must be considered. It is difficult to make a preoperative diagnosis, so surgery is recommended to confirm the diagnosis. Laparoscopic surgery can be performed by an experienced surgeon, and postoperative outcomes are reliable.