With deep regret and sadness, we report the death of Professor Cemalettin Topuzlu, founder of the Turkish Journal of Surgery (priorly Ulusal Cerrahi Dergisi), who served as the Editor-in-Chief between 1985-2005 (Figure 1). First, I would like to express my sincere condolences to the Topuzlu Family. 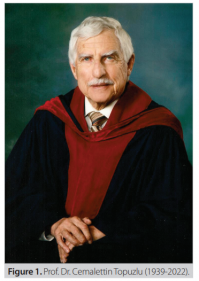 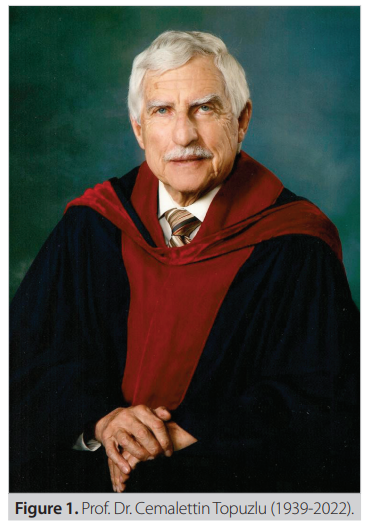 Dr. Cemalettin Topuzlu was born in 1939 in İstanbul. His grandfather, Dr. Cemil Topuzlu was a prominent figure in Turkish medicine as well as politics. Dr. Cemil Topuzlu was among the pioneers in the history of Turkish surgery and performed the world’s first intraoperative arterial suturing (1). Just like his grandfather, Dr. Cemalettin Topuzlu had pursued a long professional and academic career with very remarkable achievements.

He graduated from İstanbul University, Faculty of Medicine in 1962 (the first prize-Yaman Egeli award). He completed his surgical residency in University of Vermont, Department of Surgery, U.S.A in 1967. Subsequently, he was appointed as Instructor and later as Assistant Professor of surgery and co-chairman of the surgical research laboratory in the same institution.

Throughout those years, he was closely involved with experimental surgical research principally in “renal function in obstructive jaundice”, “functional aspects of lymph nodes”, “physiology of blunt chest trauma” and “micro-surgical repair of peripheral nerves”. He published several landmarking articles in leading surgical and medical journals (2-6). He was the recipient of some prizes from American Cancer Society (1967), South East Surgical Congress New Orleans (gold paper award, 1969) and the Eczacıbaşı Foundation (1971) (7).

Dr. Topuzlu was not only a very good surgeon but also the founder and an active member of several academic organizations. He was one of the Founders and past Vice President of the Turkish Surgical Society and the Founder of the American College of Surgeons Turkish Chapter (2004). Between 1971-2006, he served in different academic and administrative positions in Ege, Marmara and Istanbul Universities. His main interests were breast surgery and medical student teaching.

Among these great achievements, I would like to stress once again his important role, as the Founder and Chief Editor of the “Turkish Journal of Surgery” between 1985-2005. Dr. Topuzlu was greatly passionate of medical publishing. His first editorial for Turkish Journal of Surgery -37 years ago- is a great example of his precise work that he performed before launching a whole new journal (Figures 2 and 3). 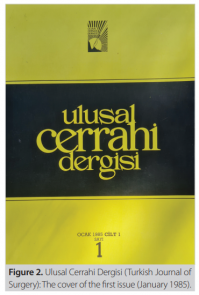 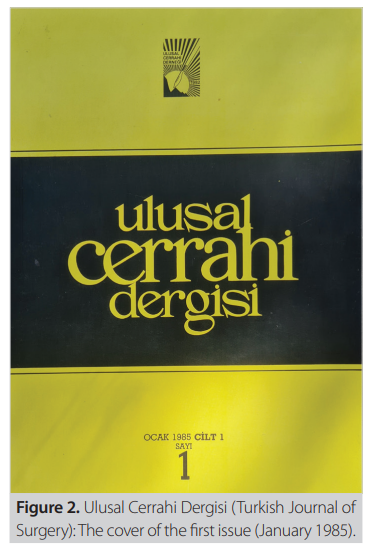 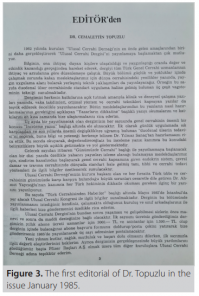 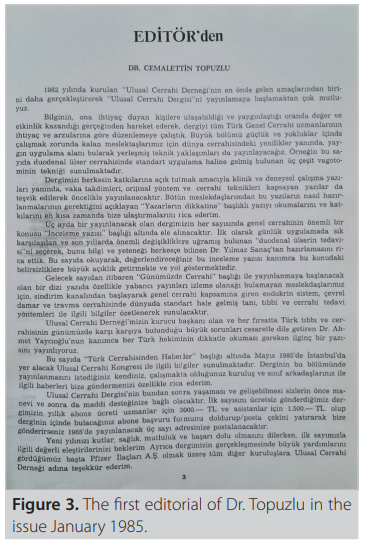 I had the privilege to take part of a session about medical publishing that Dr. Topuzlu co-chaired during the 22th Turkish National Congress (23th-27th March 2022). All the audience and I were absolutely amazed about his high experience and passion about medical publishing. As the current editor of Turkish Journal of Surgery, I can only promise to give my best to improve this -already 37 year-old- journal with my great respect to our founder editor Dr. Cemalettin Topuzlu.

As you all know, Turkish Journal of Surgery is being published in English but I would like to bid farewell to Dr. Topuzlu with a few last words in our native language Turkish.

P.S. I wish to express my sincere gratitude to the Topuzlu Family for providing the documents and images.

Category: Letter from the Editor