Objective: Surgical site infections (SSI) are the most common complications after liver transplantation (LT). Although there are some risk factors known in the literature after LT, the available data is insufficient for routine use. In the present study, it was aimed to define the parameters that may be used to clearly determine the risk of SSI after LT in our clinic.

Material and Methods: In the present study, we evaluated 329 patients who underwent liver transplantation with regard to risk factors for surgical site infections. The relation between demographic data and SSI was evaluated using SPSS, Graphpad, and Medcalc statistical programs.

Conclusion: As a result, deep and organ space infections are much more observed in patients undergoing liver transplantation with hepatitis B, diabetes mellitus and prolonged surgery. This is thought to have developed because of chronic irritation and increased inflammation. Since data on hepatitis B and duration of surgery are limited in the literature, this study is considered to be a contribution to the literature.

Liver transplantation (LT) is one of the most effective therapeutic options for patients with liver diseases. However, complications constitute most of the previously reported causes of death in these patients. Postoperative infections are the most common complications after LT (1-8). Hospital infections, which occur as a result of invasive procedures and applications in the hospital, lead to prolonged hospital stay and cause significant morbidity and mortality. Surgical site infections (SSIs) constitute a significant part of hospital infections (2). SSIs are divided into three distinct types as superficial incisional, deep incisional and organ space. Although advances have been made in infection control practices, including improved operating room ventilation, sterilization methods, surgical technique, and availability of antimicrobial prophylaxis, SSIs remain a substantial cause of morbidity, prolonged hospitalization, and mortality (3).

Previous studies have documented increased risk for SSI based on patient and operative characteristics (3-5). Studies have shown that MELD score, diabetes, hyperglycemia, age, operation time, high volumes of blood transfusion are risk factors for SSI (5-7). The aim of this study was to determine and understand the risk factors of SSI in patients undergoing LT in our general surgery department.

Patients who underwent transplantation for chronic liver disease at Bursa Uludağ University from January 2007 and August 2020 were included in the current study. Ethics approval of the study was obtained from the local institutional ethics committee (No: 2011-KAEK-26/413, Date: 20.07.2020).

The same immunosuppression regimen was applied to all patients included in the study, which consisted of tacrolimus, steroid and mycophenolate mofetil (MMF). Standard dose steroid and MMF were used, and tacrolimus doses were checked daily to keep them within a certain range. Perioperative antibacterial prophylaxis consisted of ampicillin and sulbactam for the first 48 hours after transplantation. Anti-fungal and anti-viral prophylaxis included a combination of nystatin swish-and-swallow, micafungin, fluconazole, ganciclovir and valganciclovir for 3-6 months, depending on the risk profile. Post-transplantation antimicrobial therapy was changed on an individual basis considering clinical factors and speciation of microbiology results.

Surgical site infections were classified according the centers for disease control and prevention classification system as follows:

(a) superficial incisional involving only the skin or subcutaneous tissue of the incision;

(c) organ-space involving any part of the body opened or manipulated during the procedure excluding the skin incision, fascia, or muscle layers. In the presence of more than one SSI type, the more complex SSI type was selected. Patients’ demographic information, operative details, post-operative outcomes and infection outcomes were collected from the archive of the department of general surgery. SSIs were defined by using standardized Centers for Disease Control and Prevention’s National Healthcare Safety Network.

The relation between demographic data and SSI was analyzed using SPSS, Graphpad, Medcalc statistical programs. Chi-square test was used between types of organism and source of infection. Overall survival details were presented for each of the three different SSI groups. The Kaplan Meier method was used to determine the effect of SSI on survival. Multivariate analyses were performed using a Cox proportional hazards regression model to investigate associations of patients features, operative information and postoperative complications within 30 days of liver transplantation with development of SSI after liver transplantation. Logistic regression analysis was performed to analyze the risk factors. Student’s t-test was used for comparison of quantitative outcome parameters.

First, the relation between SSI and prognosis was investigated by Kaplan Meier analysis, and the effect of SSI development on short overall survival was determined (Log-rank, p= 0.003, HR= 4.614, Figure 1). 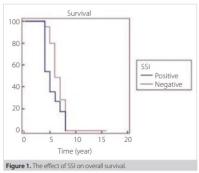 Figure 1. The effect of SSI on overall survival.
× 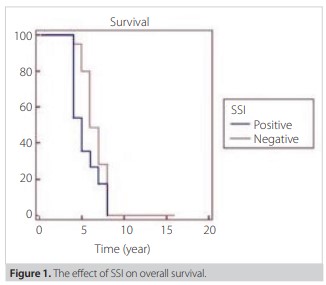 In our study, SSI was 22 in males and 15 in females, and no statistically significant relation was found (p> 0.05). In single variable analysis, there was an association between HBV-infection and SSI (p= 0.001). SSI, which was associated with poor prognosis, showed a statistically significant relation with operation time (p= 0.008), diabetes (p= 0.004), HBV-infection p< 0.001).

In our study, the operative time lasted longer than two hours, which resulted in an increase in the risk of SSI (Table 3). In the study, 21 of the 94 patients with diabetes mellitus developed SSI. In the modeling based on logistic regression analysis with all parameters showing significance, operative time and HBV diagnosis were determined as independent risk factors for SSI (Table 4).

SSI is an important cause of morbidity in the early post-transplant period due to the complexity of the surgery, immunosuppression and patient comorbidities (8). Although progress has been made in infection control practices, SSI remains one of the most common health-related infections (8).

In our patient group who developed surgical site infection, the duration of intensive care and hospital stay increased in the postoperative period, but this result was not statistically significant.

According to a study conducted by Işık et al. in 2015, operation time exceeding four hours was found to be a risk factor for the development of SSI (14). Our study was consistent with the results of this study. In our study, the operative time lasted longer than two hours and resulted in an increase in the risk of SSI. Malone et al. have compared patients with a duration of operation <2 hours, 2-4 hours, and >4 hours and found that as duration increased, so did the rates of SSI (2.1%-3.3%-6.4%, respectively) (15).

Our study has several limitations. As our study was a cohort study, we did not check the interventions that could have affected the results. Clinical parameters in the study are few.

In conclusion, we found that HBV-infection and operative time were associated with an increased risk of SSI. In order to reduce the rate of SSI in patients with LT, studies should be increased.

The approval for this study was obtained from Uludağ University Faculty of Medicine Clinical Research Ethics Committee (Decision no: 2020-12/17, Date: 08.07.2020).