Endoscopic submucosal dissection (ESD) and endoscopic mucosal dissection (EMD) are recognized treatment procedures for mucosal lesions. There will always be a risk for complications even if they are performed by experienced specialists. In this study, we aimed to present a 58-year-old male patient in whom lesion was detected in the proximal part of the descending colon during a colonoscopy. Histopathological examination of the lesion revealed intramucosal carcinoma. The lesion was removed by ESD but after the intervention, bilateral pneumothoraxes, pneumoperitoneum, pneumoretroperitoneum, pneumomediastinum and pneumoderma complications observed. It is quite unlikely to encounter all of these complications together in one patient. In this paper, we would like to highlight the potential for complications after ESD, even for the rare and unexpected ones, to contribute to their recognition and treatment.

Endoscopic submucosal dissection (ESD) and endoscopic mucosal resection (EMR) provide favorable and precise solutions for gastrointestinal mucosal lesions. As perforation is the main complication with endoscopic resections, ESD use is controversial to some extent due to high complication rates, long learning curve, and long procedural duration (1). Intraperitoneal air has been observed at unexpectedly high frequencies when computerized tomography (CT) imaging is performed after the procedure although it is not required in the routine clinical practice (2). In our paper, it was aimed to present the clinical management and outcome of bilateral pneumothoraxes, pneumomediastinum, pneumoperitoneum, pneumoretroperitoneum, and pneumoderma diagnosed after an ESD intervention in the descending colon.

This is a 58-year-old patient with no diagnosed health problems. During a colonoscopy intervention due to the complaint of rectal bleeding, a sessile lesion was detected in the proximal part of the descending colon and biopsy samples were collected. The outcome of the histopathological examination revealed intramucosal carcinoma developing on tubular adenoma. The patient’s laboratory (carcinoembryonic antigen 0.5 ng/mL) and radiological findings revealed no positive findings and the colonoscopy examination was repeated by us. The lesion was observed to be 25 mm in diameter with a wide base. It was protuberant and owned a micronodular surface (Figure 1A). After the intervention, the patient was informed of the polyps in the colon, of his lesion, and of possible treatment options. The lesion was removed by ESD via a colonoscope (Pentax, EPK-i5000, Tokyo, Japan) after obtaining informed consent of the patient. The intervention took 43 minutes to be completed. Two endoclips (Olympus QuickClip2TM, Tokyo, Japan) were placed due to the deepening of the lesion in some regions, extending till muscularis propria (Figure 1B). Due to the complaint of pain developing after the intervention, the patient was hospitalized. Laboratory tests resulted in a C-reactive protein (CRP) level of 2.93 mg/dL and leukocyte count of 13.11 K/uL. As the pain complaint was not resolved, an abdominal CT (Siemens, Berlin, Germany) was performed demonstrating bilateral pneumothoraxes, pneumomediastinum, pneumoperitoneum, pneumoretroperitoneum, and pneumoderma (Figures 2A-B). The general condition of the patient was good and his vital signs were stable. Oral intake was stopped and the patient started fluids, electrolytes, and antibiotics intravenously. Blood gas analysis results were as follows: pH 7.4, lactate 0.7 mmol/L. The respective 6-hour and 12-hour laboratory test outcomes were CRP 9.44-17.16 mg/dL, and leukocytes 14.39-12.79 K/uL. On consulting with the chest diseases and thoracic surgery departments for pneumothoraxes and pneumomediastinum, close monitoring of the patient and antibiotic treatment were recommended. During clinical monitoring of the patient, the complaint of pain was sustained. The abdomen was distended. Laboratory test values in the 24-hour laboratory values were 20.59 mg/dL for CRP and 12.03 K/uL for leukocyte count. An ultrasound-guided 8F drainage catheter was placed intra-abdominally by the interventional radiology department. Abundant amounts of air were aspirated through the drainage catheter and then it was allowed for free drainage. Abdominal pain relieved on the third day. Leukocyte count and CRP levels were 10.84 K/uL and CRP 18.41 mg/dL, respectively. The patient started oral intake of food. The patient was uneventful on the fourth and fifth days of monitoring. He was discharged from the hospital with a normal leukocyte count and with CRP levels of 5.32 mg/dL. Histopathological examination of the tissue sample obtained by ESD revealed a moderately differentiated tumor limited to the mucosa. All surgical margins were reported to be intact. A control endoscopy, performed one month later, demonstrated that the resection area was intact.

Figure 1. A. View of the lesion before ESD, B. Resected area and endoclip application after ESD.
× 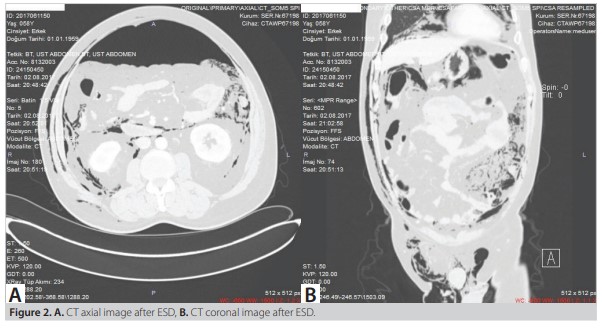 Endoscopic submucosal dissection is an alternative method to surgery in the treatment of eligible cases (2,3). It provides more advantages in mucosal cancers compared to the conventional endoscopic mucosal resection (EMR) (2). Therefore, ESD was applied to our patient as the diagnosis was intramucosal carcinoma. However, compared to conventional (EMR), ESD takes a longer period of time to perform and has higher rates of complication such as bleeding and perforations (4,5). Main complications associated with ESD are perforations and bleeding (4). The duration of the intervention was not prolonged and no perforations or bleeding was observed in our patient during the procedure. However, perforations after ESD can be classified into two as macro-perforations and micro-perforations (2). Macro-perforation is defined as a hole, which can be recognized easily by endoscopy. Micro-perforation is a kind of perforation which is diagnosed by the presence of free air observed in the direct radiogram after the intervention (2). There are some explanations on the causes of micro-perforations that they can occur after a small puncture by an injector or they can be caused by some transmural air leakage due to a mild injury of muscularis propria without a visible hole (2,6). In addition, excessive tool manipulation, longer durations of electrocauterization, and keeping the electrocautery close to the muscular layer may result in transmural burns, and eventually, perforations (7). Although there was not a macro-perforation in our patient, thermal damage in the muscularis propria layer was observed and closed with endoclips. A perforation can usually be treated immediately by placing metallic endoclips. The pneumoperitoneum, which was detected after the intervention, was decided not to require surgery after monitoring the patient for 24 hours. Then intraabdominal catheter was placed and decompression was performed. Surgery should be performed in cases where endoscopic closure of the perforation is not ensured or the patient is not stable.

The presence of air in five different localizations (pneumoperitoneum, pneumoretroperitoneum, pneumomediastinum, pneumothorax, and pneumoderma) developing after ESD is a very rare complication. Retroperitoneal air arose directly from the retroperitoneal perforation of the colon or from the air leakage to the mesentery and retroperitoneum all the way through the dissected colon wall (7). The retroperitoneal air moves to the mediastinum along the fascial planes. Following the eventual rupture of the mediastinal pleura, it is transferred to the pleural spaces ending up with pneumothorax (7). If dyspnea or pneumoderma develops during or after the procedure, chest radiography or thoracoabdominal CT should be performed for diagnostic purposes (3). As it was predicted that a chest tube insertion might be necessary, the patient was treated with intermittent oxygen therapy and antibiotics after the CT scan of the pneumothorax.

After an ESD intervention, we may unexpectedly encounter the insufflated air, for colonic lumen expansion, in the form of pneumoperitoneum, pneumoretroperitoneum, pneumomediastinum, bilateral pneumothorax, and pneumoderma. However, before radiological findings, the clinical course of the patient should be considered first. For this reason, if there is no evidence of peritonitis or respiratory distress in a patient after ESD, identifying the presence of free air radiologically will not require changes in treatment strategies.